As AMS Neve commemorates 50 years of its iconic 1073 mic preamp with a contemporary variant designed with the modern studio in mind, we look to the past, present and future to determine its usefulness. 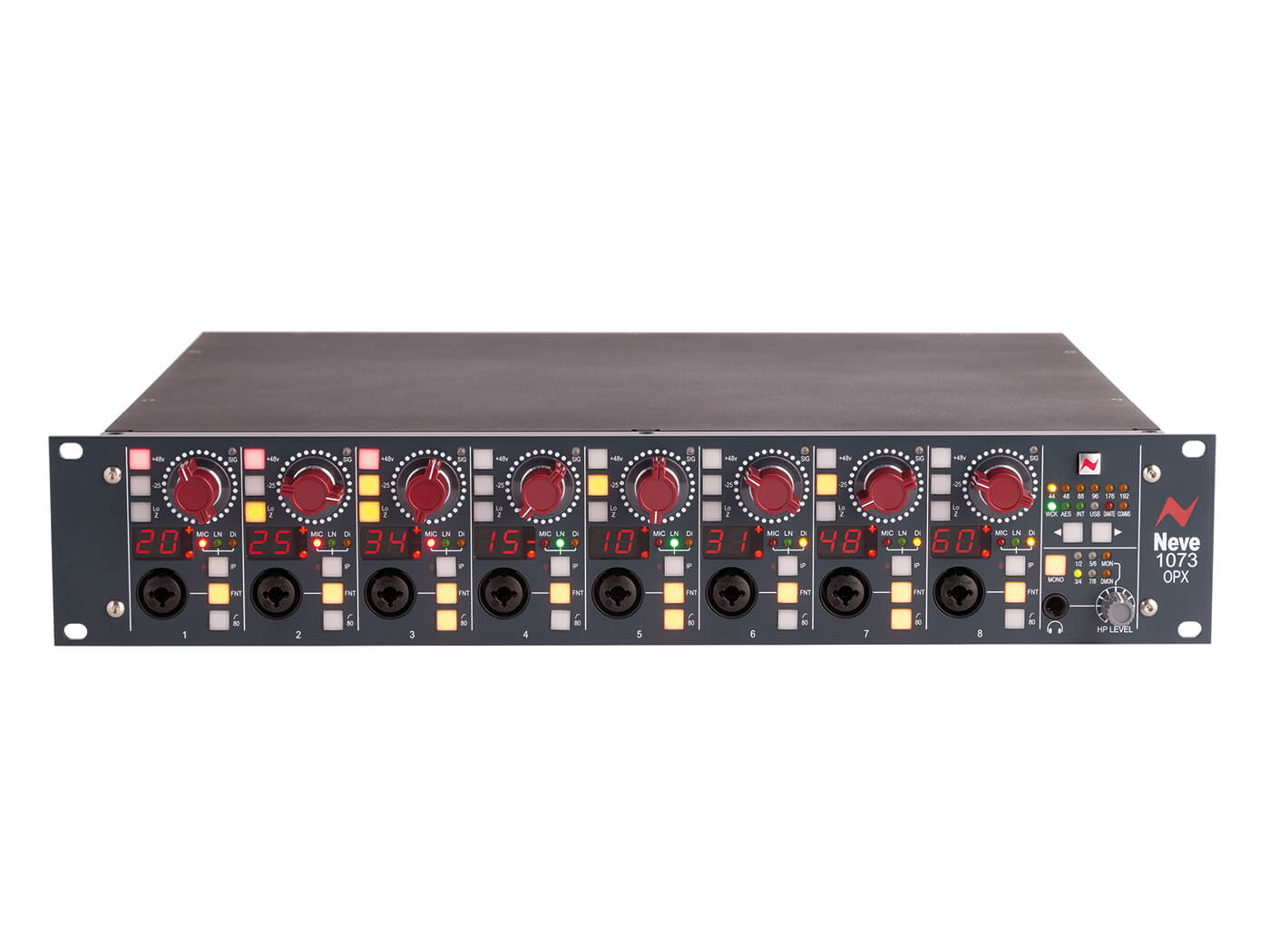 Golden anniversaries of pop-culture icons come and go all the time. Some, however, are truly worth celebrating. There’s no doubt that Rupert Neve’s 1073 microphone/line amplifier, launched in 1970, is the most revered British solid-state mic preamp of all time. Sure, EMI’s original TG transistorised desks can lay claim to state-of-the-art status but, to use one of those back in the day, you would’ve had to record at Abbey Road Studios. All the other cool studios had a Neve.

To mark the 50th anniversary of the 1073, AMS Neve has created the ultimate 1073 package for the 21st century, incorporating eight channels of their legendary Class A microphone preamps into a standard 2U 19-inch rackmount unit.

They could’ve just taken one of their existing 1073 products, slapped a 50th Anniversary Special Edition badge on the front, upped the price by a few hundred quid and left it at that. But that’s not the Neve way. AMS Neve remains a forward-thinking company – and that demands future-facing solutions. 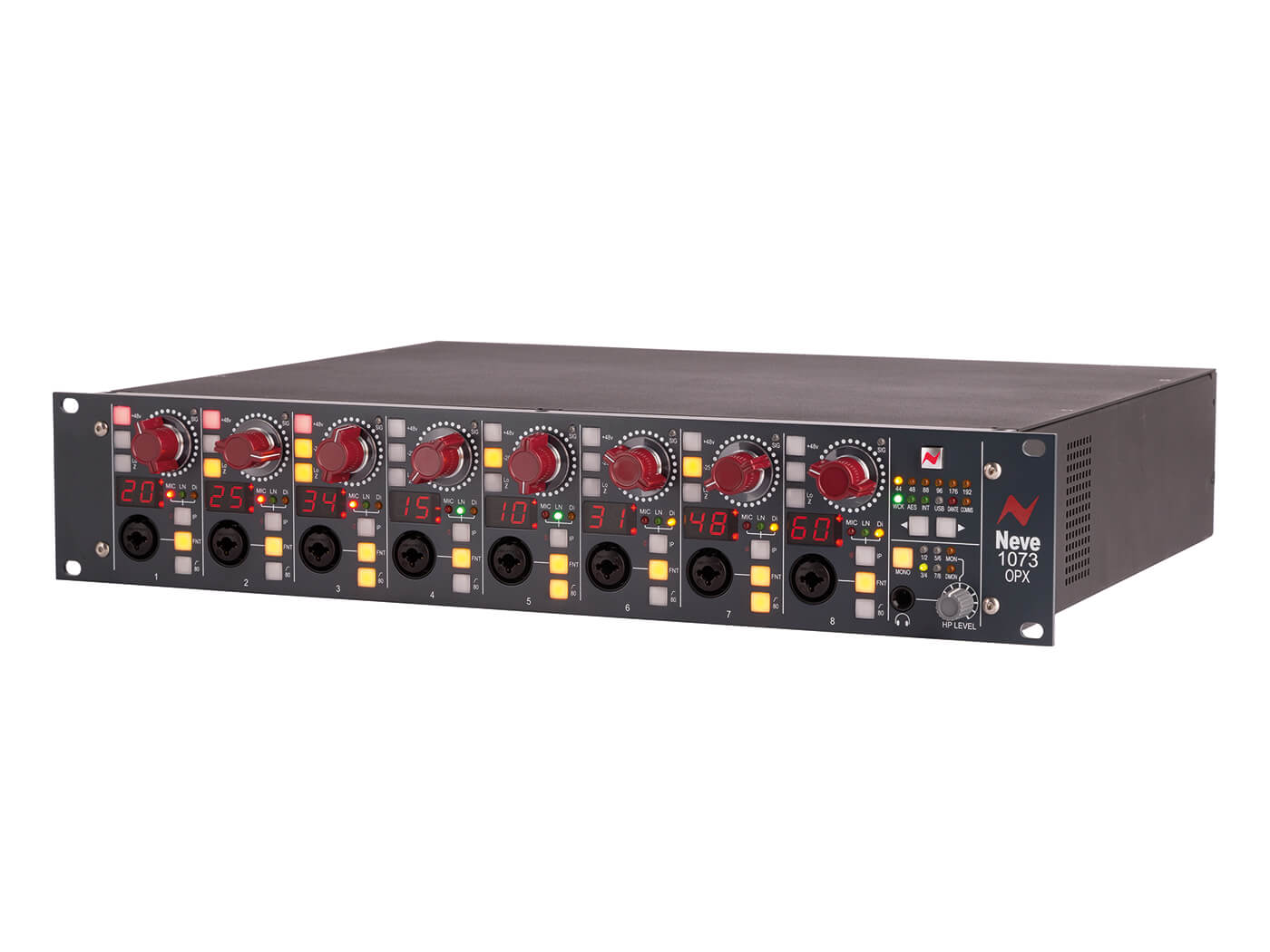 The 1073 OPX sports the classic analogue sound but with the convenience of full USB and Dante digital connectivity. What’s more, the accompanying software package allows for full remote control operation of all the unit’s features. Should you be lucky enough to own more than one 1073 OPX, the software can control up to eight units, offering a total of 64 channels of glorious Neve sound. That’s more than double the number of channels found on the early 1970s A88 console for which the 1073 module was originally designed.

Although we’re primarily concerned with the 1073 OPX as it functions in the studio, the unit has also been developed to offer the classic 1073 sound in live performance settings. It’s here, for example, that the software can be used to remotely control each channel from front of house, while the unit remains on stage.

Input gain for each channel in controlled via a digital stepped encoder, offering up to 70dB of gain in 1dB steps. While the chunky red dial has the look of historic 1073 units, in use it’s much smoother than the clunky 5dB-stepped pots on the older models. This allows for far more accurate gain setting and matching, while the precise amount of input gain dialled in is shown on the channel’s LED display. Condenser microphones are catered for with 48V phantom power, which only appears when the mic input is selected, so there’s no danger of sending 48V down a line or DI input, while ribbon mics may benefit from the 300 ohms Lo Z option, which lowers the impedance from 1,300 ohms.

Each channel incorporates a 25dB pad and an 80Hz high-pass filter. Sadly, there’s no room here for the EQ section found on several of the other units in AMS Neve’s 1073 range. There is, however, a Class-A sans-transformer DI input accessed through each channel’s mic/line combi input on the front panel. The rear panel features USB connection for when the 1073 OPX is used as a primary audio interface, with Dante primary and secondary connection for audio-over-IP applications. This ensures the legendary 1073 analogue sound is future-proofed for the digital age, with both USB and Dante operating all the way to 192kHz. 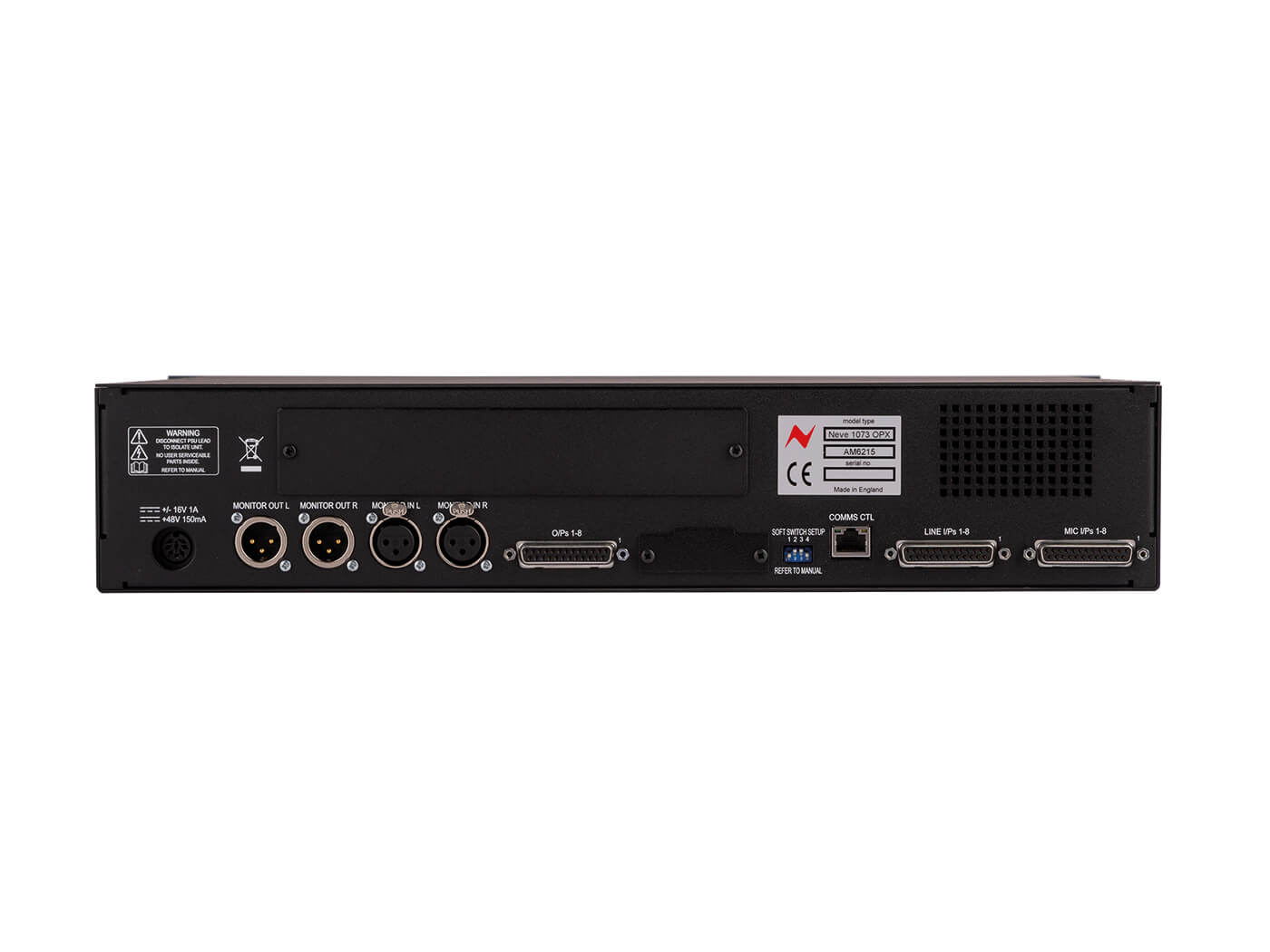 The unit’s monitor section is comprehensive, offering latency-free monitoring in both analogue and digital domains. There’s a stereo line input on the rear of the unit that enables a monitor return path, which can be used to monitor through headphones (via a front panel socket) or the XLR monitor outputs, which can feed a pair of powered monitors.

The app that comes with the package is intuitive, with a graphical display of the unit’s front panel controls. All parameters can be adjusted onscreen and, as this is an interactive app, any adjustments made on the unit itself will also appear onscreen. All settings can be stored for easy and precise recall. For our tests, it would’ve been nice to be able to use all eight channels simultaneously to record a rhythm track. However, circumstances worked against us so instead we recorded a number of instruments individually, as we would when testing a single-channel unit.

Starting with a simply mic’d acoustic guitar, the 1073’s iconic sound is instantly recognisable. It’s a larger-than-life sound that’s both silky smooth yet punchy and forceful. Transients are snappily caught yet not in a way that masks the body of each note. There’s a fullness to the tone that thickens the natural timbre of instruments without becoming woolly or dull. This makes for a solid sound ideally suited to all types of rock, pop and electronica where presence and punch is prized. High frequencies are coated in a glossy sheen that aids definition and clarity without becoming harsh or brittle, which can happen with budget transistorised gear.

By way of comparison, we record further passes through our reference valve mic preamp, Thermionic Culture’s Early Bird, and our solid-state DDA console, both using the same microphone, our trusty AKG C414. Through the valve unit, the guitar’s timbre is as evenly conveyed as through the Neve but with less impact and drive, while a side-by-side comparison with our neutral-sounding DDA console highlights the 1073’s expansive character.

The human voice is always a good test of the characteristics of audio equipment, and a simple recording of some speech reveals the unit’s essentially clean and natural tone. Although less charismatic preamps might have the edge in ultimate transparency, the richness of the 1073’s presentation is always flattering in a musical way and never becomes thin, nasal or one-dimensional.

Swapping out the C414 for a Coles 4038 to record some bass guitar, we select the 1073’s 300 ohms setting to ideally match the insensitive ribbon mic. Here, the solidity of the Neve’s low-end response produces a muscular sound that’s deeper, heftier and tighter than our valve mic preamps, while the smooth transition through bass, mid and treble regions again demonstrates the supremely even tonality throughout the frequency range. Plugging our lovely vintage Gibson EB bass into the front panel DI input produces a fine directly injected bass sound that’s easily as good as any standalone DI box we’ve used.

Much of the 1073’s character can be attributed to the use of Neve’s exclusive Marinair transformers, which sets it apart – as well as head and shoulders above – from the many budget-priced copies on the market.

While the remote-control features are the main selling point of the OPX, those who do not require it – or don’t need eight channels to simultaneously record with – can look to Neve’s other units for the authentic 1073 sound. The two-channel 1073 DPX, for example, lacks the remote capability but adds the wonderfully musical 3-band EQ that is almost as iconic as the mic preamp itself.

There’s now a 1073 for everyone, whether you require a simple single-channel unit, a two-channel mic preamp with EQ or this fully remote, eight-channel preamplifier that offers the best of traditional analogue sound combined with digital control. AMS Neve has marked itself out as a forward-thinking company with the OPX. There could be no better way of celebrating the 1073’s glorious past than by equipping it with all the high-tech features required to ensure a glorious future. 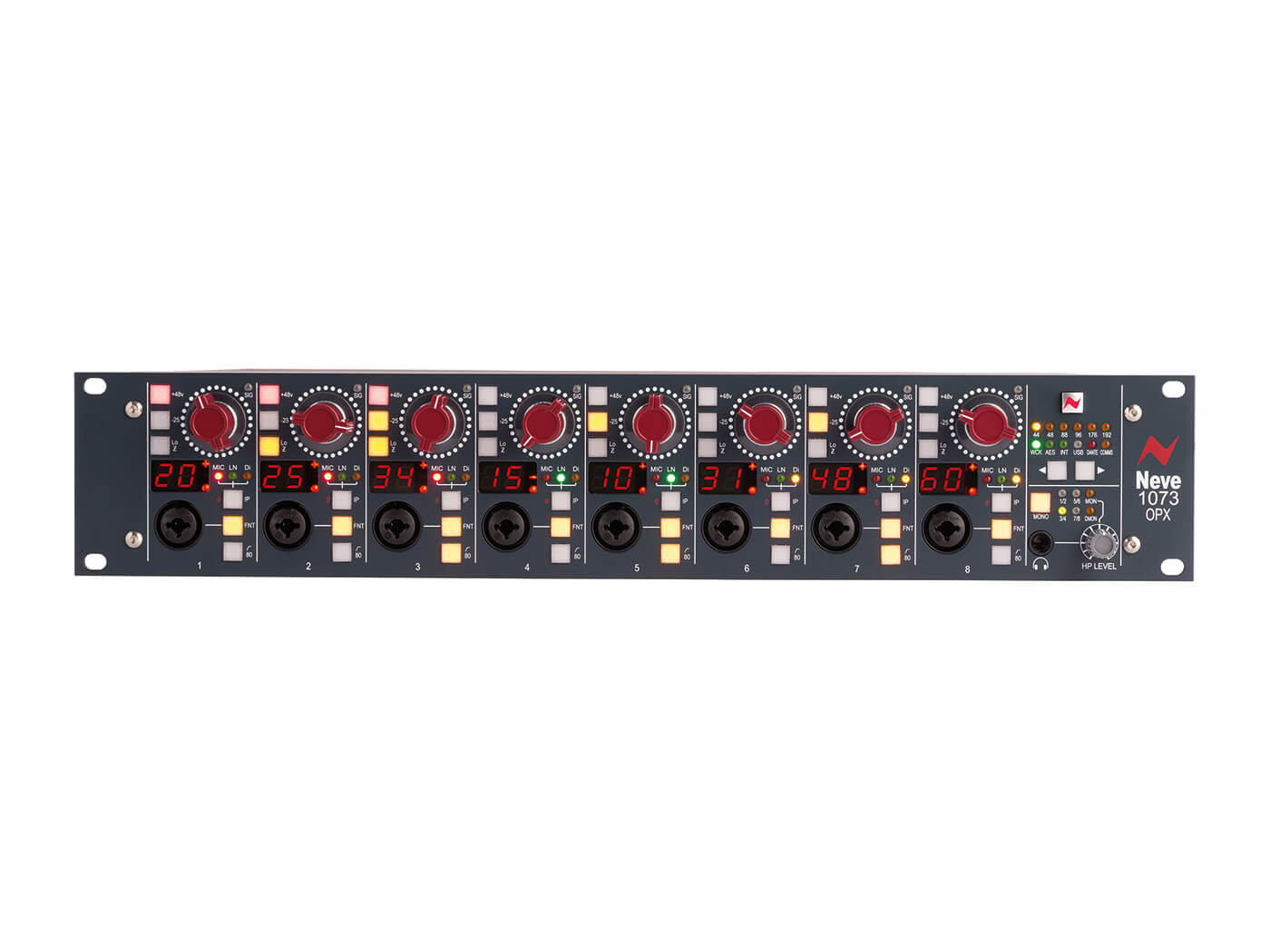 Eight channels or more of AMS Neve’s most iconic microphone preamplifier is always going to be a tempting offer. Where the new 1073 really makes its mark is in its flexibility. Larger professional studios will tempt clients with the prospect of tracking through classic 1073 amplifiers running alongside their modern consoles, while producers working largely in-the-box will find eight channels of characterful analogue sound a revelation in comparison with the often sterile sound of digital alternatives. Quite apart from us studio types, the OPX and its proprietary software is superbly suited to live performance and broadcast applications too.

The OctoPre offers eight additional channels of microphone preamplification for existing users of a Focusrite Scarlett interface or any other interface with ADAT functionality. Sample rates up to 192kHz in 24-bit audio resolution are available. Softube Time and Tone and the Focusrite Red 2 and Red 3 plug-in suite come as part of the package.

If you require fewer channels, AMS Neve’s 1073 DPX offers two channels of pure analogue Class A sound along with Neve’s equally legendary 3-band equaliser and Marinair transformers on each input and output stage. An insert send and return loop allows external equipment to be connected to the audio chain.