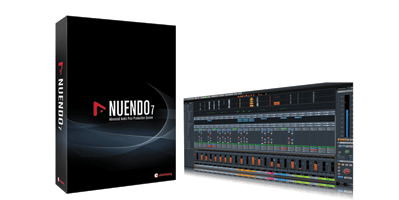 Audio post production is a highly specialised world. Hollin Jones finds out if Nuendo 7 has what it takes to make a splash… 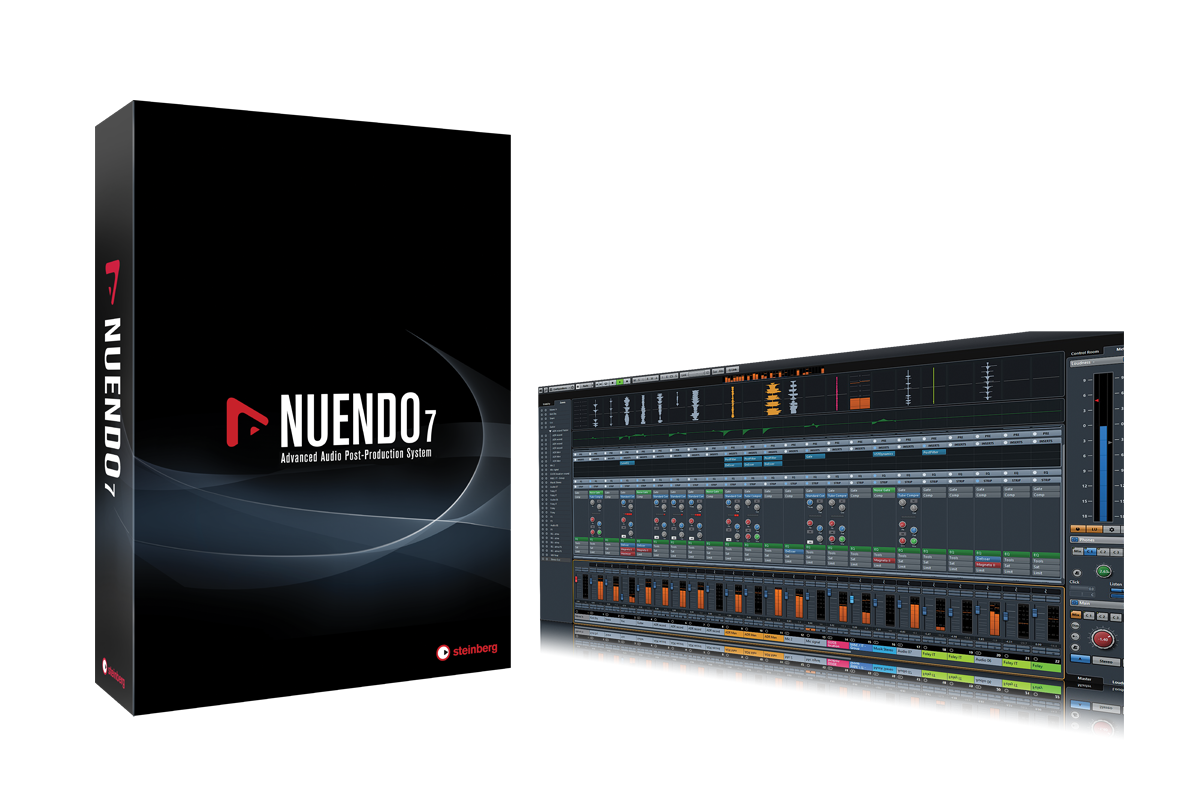 Nuendo is less widely known than Cubase in music circles, but more likely to be found in audio post-production studios. That’s because, although the two products share a lot of common DNA, they have a different focus.

Where Cubase is music-centric, Nuendo is geared towards sound-to-picture, be it for TV, film or increasingly games. Since both programs share a lot of source code, changes introduced in Cubase often pop up in new versions of Nuendo. That’s true here, though Nuendo 7 has a few new tricks of its own, too.

Outlining what Nuendo is about involves mentioning some of the requirements of audio post. These centre around extensive support for video and synchronisation formats, as well as dialogue recording and standard-compliant loudness metering. Compare pictures of Cubase 8 and Nuendo 7 and you’ll see they are both advanced audio recording and editing environments.

Nuendo has its own tools and omits some of the more music-oriented stuff, such as scoring, chord tracks and some instruments, though these can be added via upgrade.

Playing Games
Nuendo 7 is cross-platform, and introduces some new features that will be of interest to post producers. First is Game Audio Connect, an interface technology that lets you import audio into the Wwise game middleware system. It also integrates with the Perforce system, so changes to a Nuendo project are reported automatically.

Also new is ReConforming for film and TV post, a tool that detects changes to edits based on comparing before and after Edit Decision Lists. The idea is that since you usually start audio editing based on an early cut, you’ve always had to spend time re-editing to cope with subsequent picture edits. This tool aims to make that process easier by automatically updating your timeline.

A feature inherited from Cubase is render-in-place, for quickly bouncing one or more audio or MIDI parts inside a project without having to export first.
There are multiple render options, and it’s a great time-saver. If you want to export, the Render Export box lets you perform the same tasks and options, but renders out of Nuendo rather than inside the project. 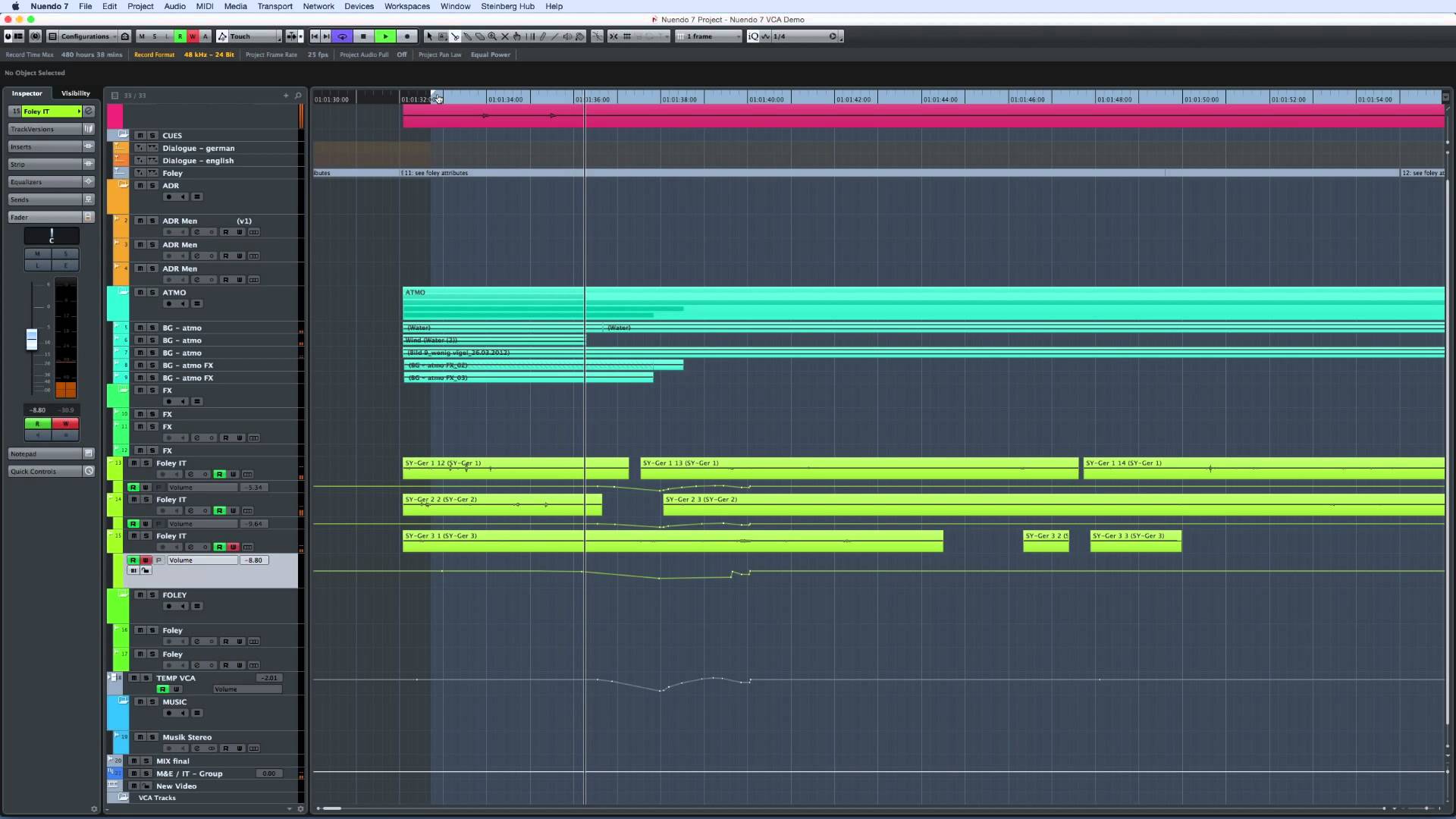 More project-level workflow improvements come in the form of a new Import Audio Tracks From Project function, which can pull tracks with audio, plug-ins, routing and automation from any project to another without opening the source project.

Open Windows
There’s a new window organiser, with windows able to be placed on any display and cycled or arranged. This works a little more flexibly on Windows than on a Mac.

The new Rack Zone, taken from Cubase 8, lets you display the VST instrument rack and MediaBay window along the right side of a project, meaning one less floating window. There are now VCA faders in the mixer that allow you to mix more flexibly by linking different channels for easier control, and also merging automation channels. There’s a clearer, more comprehensive channel strip EQ, too.

Among the new effects plug-ins are a multiband expander, multiband envelope shaper, VST Bass Amp and Quadrafuzz V2. Updated models include the de-esser, multiband compressor and tuner. On the instrument side, you get HALion Sonic SE2 and Padshop, which used to be part of the expansion pack.

ASIO Guard 2 has been improved for better latency performance, and there’s MIDI tempo detection, as well as a more flexible plug-in manager. VST Connect SE3 is thrown in, too – Steinberg’s system for recording audio and MIDI over the internet, with video communication.

Post Analysis
Upgrades from Nuendo 6 and 6.5 are affordable, with prices going up as your existing version gets older. There’s plenty to warrant the upgrade: even if you don’t use the new game features, it will help your workflow – especially the ReConform tools, rendering in place and VCA faders. For working in audio post, it has an excellent toolset – Steinberg’s legendary interface. Yes, it’s a specialised product, but it’s very good at what it does 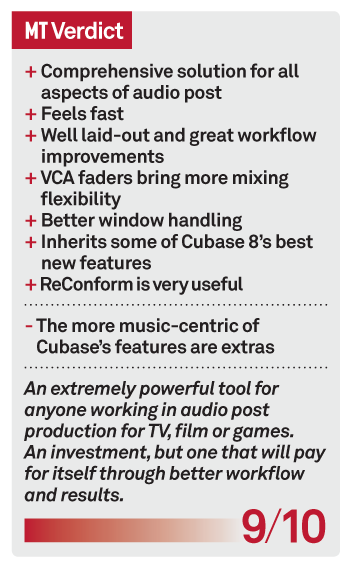