It’s the ‘natural evolution of the arpeggiator’ and a plug-in that could help your creativity. Andy Jones checks out Nora 2… Details Product Nora 2 Publisher Squaredheads Music Software Ltd Price €49 Contact via website Web www.squaredheads.com Formats Mac and PC (32/64-bit); AU VST, MIDI FX We rather like some of the creative pieces of […] 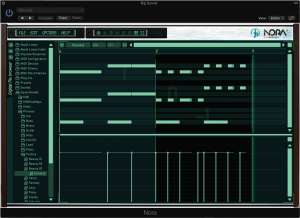 It’s the ‘natural evolution of the arpeggiator’ and a plug-in that could help your creativity. Andy Jones checks out Nora 2… 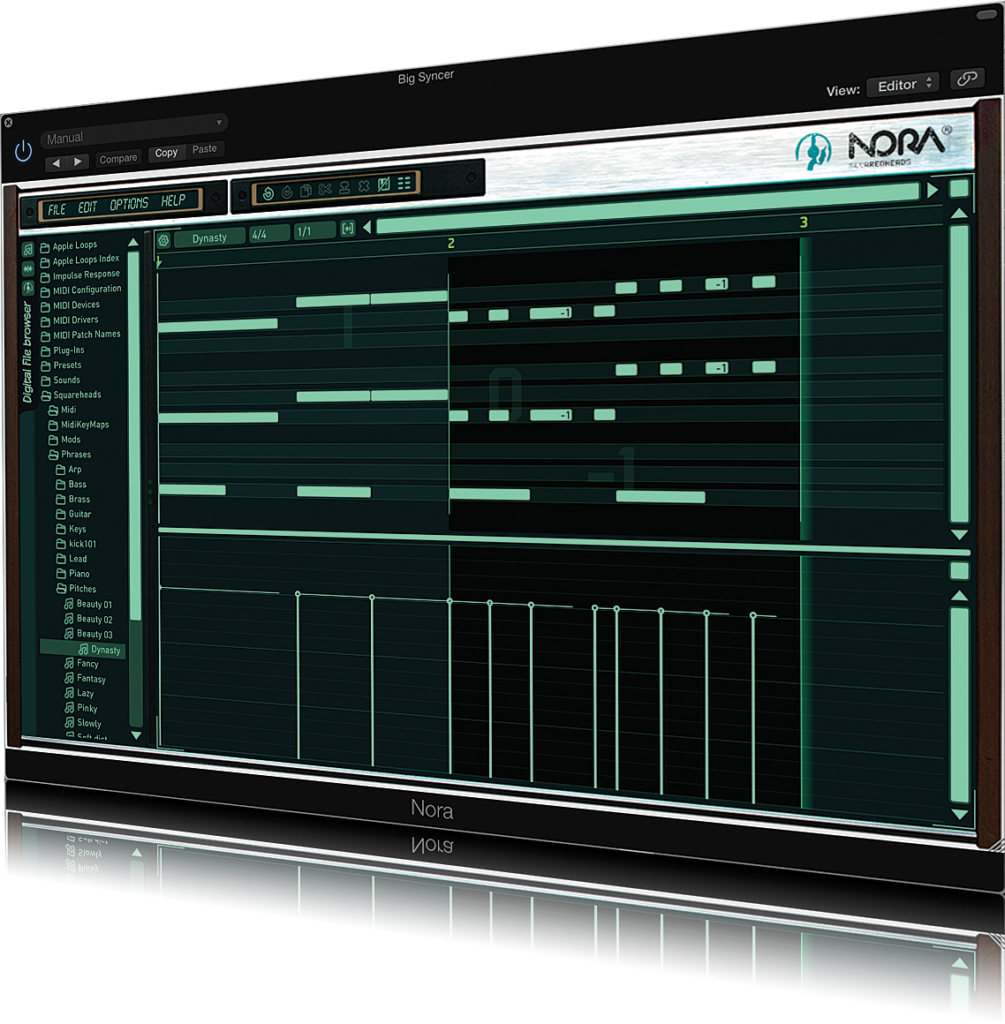 We rather like some of the creative pieces of software for music production that are being released these days. Every angle of music editing and exploration – and audio mangling and polishing – seems to be covered, whether that’s on iOS, Mac or PC, almost to the point where creative tools are being released to create solutions to problems you didn’t know you had.

On the face of it, Squaredheads’ Nora 2 is just such an plug-in. It’s a MIDI-based effect that you chain to your instruments to add a variety of easily definable arpeggiations.

You might think you have such arpeggiators built into your DAW – I thought that with Logic – but Nora 2 offers that bit extra, and arguably enters a world that isn’t so well served with apps and plugs – that of composition itself. Nora 2 might be an arp at heart, but it can also help you compose – and for some of us that could be a godsend…

Up and Running
First, though, the less exciting prospect of downloading and installing, and as usual it’s a case of creating an account at the Squaredheads website. You’ll pay a reasonable €49 for the software and get a download and download key.

This must be placed in the Component part of your download (ie, where the MIDI plug-in is located). As a Logic user, I also placed the AU in the plug-ins folder after download, and there is also a selection of presets which you drag into that folder – more on these later.

There are several useful videos that explain how to get Nora up and running within FL Studio, Ableton Live, Logic and Studio One – although that robot voice so prevalent in tutorial videos does start to grate after a while. Interestingly, there’s little to say what the software actually is and what it can do for you – that’s left up to the website.

So what we have is the arpeggiator that we mentioned earlier, only it’s a ‘natural evolution’ of the effect that has launched a thousand Jean Michel Jarres and, more recently, a million EDM acts.

You load the effect up as a MIDI effect (see the three-step tutorial on Nora in use) and then apply your MIDI instrument notes to it. What you will end up with is your original melody in your DAW, and then the patterns you either load in or create yourself in Nora 2 are applied to them in the same way as with a standard arpeggiator.

Initially, it takes a little getting used to – you have to reverse your way of thinking a little and perhaps not think of these as notes but variations of notes – but you soon realise where you are going. As we show in the boxes, there are several preset patterns (hundreds in fact) to get your teeth into, which already takes Nora way beyond most arpeggiators (certainly more than any other hardware ones).

Alternatives
Most hardware synths seem to come with a built-in arpeggiator these days, and if you have one there’s a certain amount of MIDI triggering you can do with it, even to record the results and use in software.

Software-wise, your DAW, like Logic, will probably come with a MIDI arpeggiator – and while Logic’s is simpler to use than Nora 2, it has nowhere near the depth nor the creative possibilities. Nora 2 goes far deeper and has far more compositional strengths than pretty much any other arpeggiator.

More than an ARP
Yet it’s what Nora 2 does beyond this entry-level stuff that is where its real strengths lie. You can chain patterns to make it act a little like a DAW within a DAW, a factor that is enhanced with eight tracks of arpeggiation available, each with an independent arpeggiator and able to store up to 64 patterns.

Of course, the downside is that it is very easy to get notes flying all over the place, but it is pretty easy to control; although I did find myself
wrestling with the screen size and what I wanted on it, as opposed to what it wanted to show. You can adjust the phrase size which helps here. 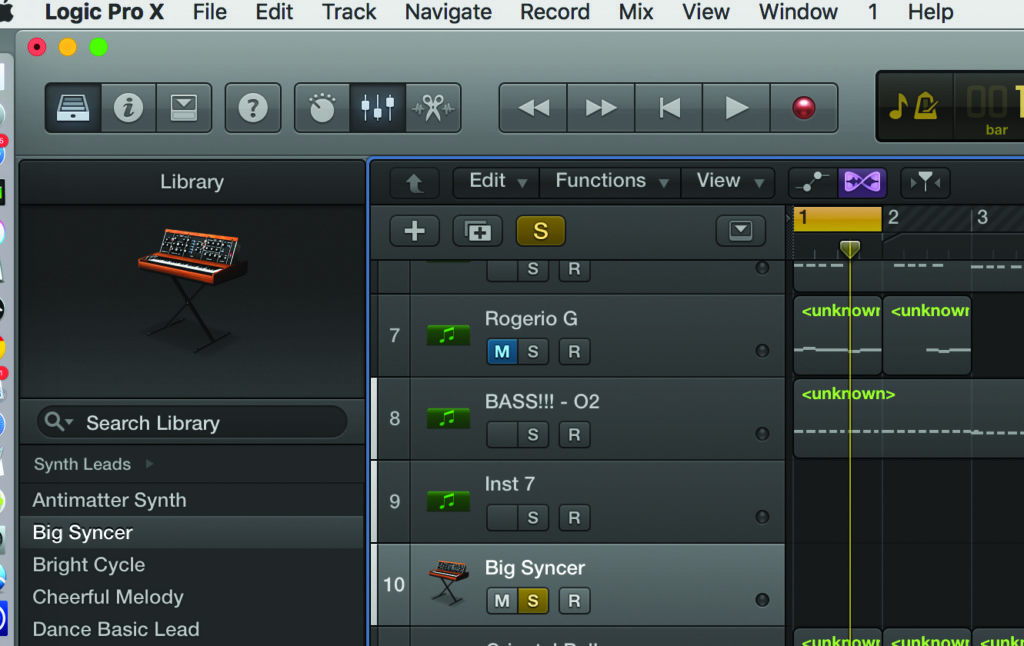 1: Getting Nora 2 Up and Running
You need to treat Nora as a regular MIDI plug-in, and in Logic this means placing it above your software instrument. To see it in action, we’ll create a MIDI rack as usual – in this instance, we’re using Retro Synth as our sound source. We’re using the Big Syncer preset, and it very much lends itself to Nora’s ‘arpy’ ways. 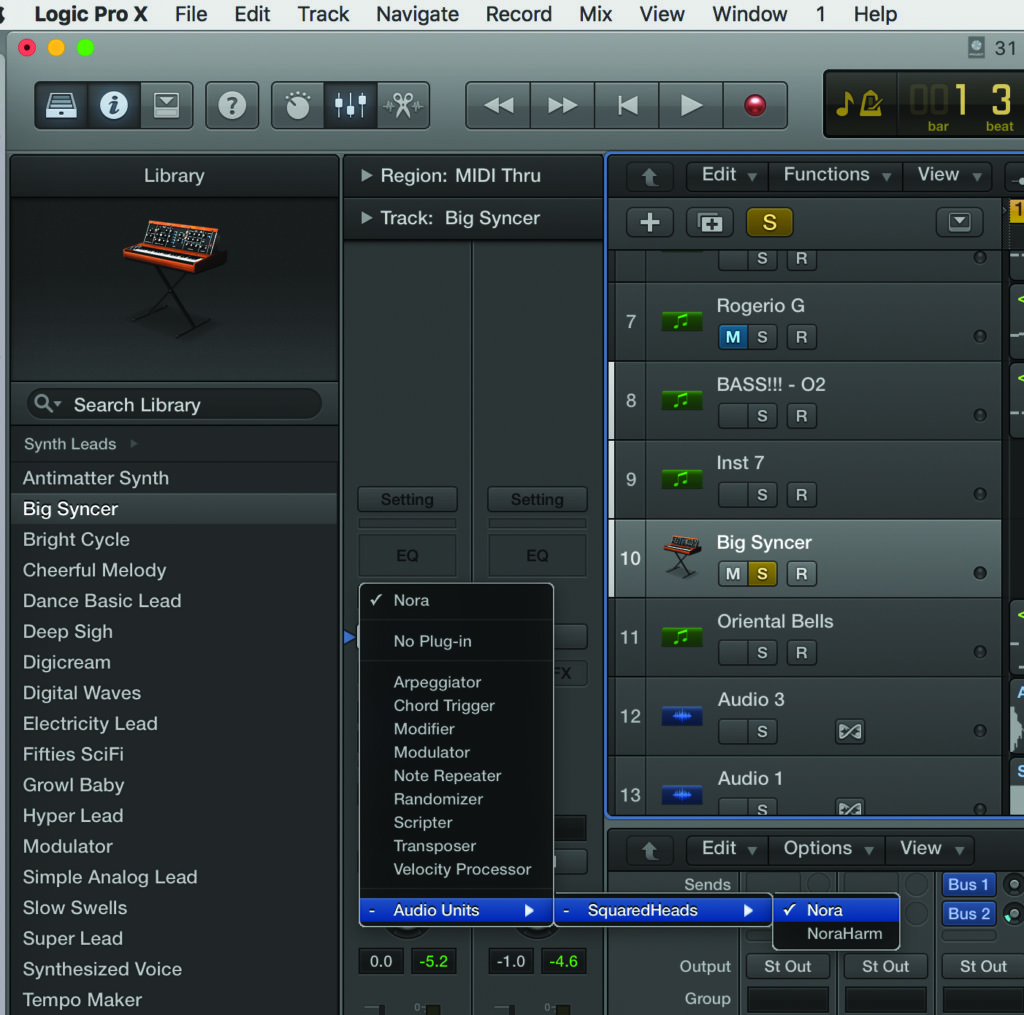 2: In Use with Nora 2
Now, you simply click on the MIDI plug-ins icon and a drop-down menu will appear, with Squaredheads Nora at the bottom. Select it to bring up your effect, and note that in the channel strip it is above the instrument – as with all MIDI FX (Audio FX are shown below). Towards the left of Nora 2 is the preset folder, which contains some of the more familiar arp patterns, a whole lot of unfamiliar ones and presets for basslines, leads, plucked, pianos and even beats. It’s worth going in here first in order to experiment. 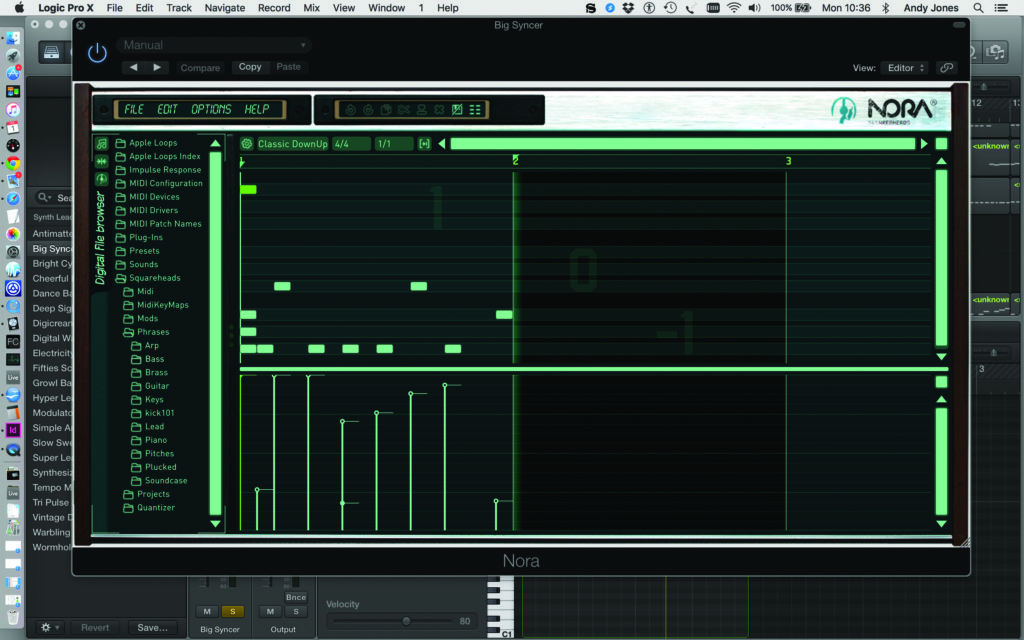 3: Creating Music With Nora 2
Towards the left of Nora 2 is the preset folder, which contains some of the more familiar arp patterns, a whole lot of unfamiliar ones and presets for basslines, leads, plucked, pianos and even beats. It’s worth going in here first in order to experiment.

Conspire to Compose
You get the message, it’s all there arp-wise, but maybe the composition side is Nora’s real draw. Apply it to the root of your melody line and you can create instantaneous basslines. Yes, that can be done in other arpeggiators too, but it’s so quick and easy you might even start to feel a little guilty at how effortlessly the melodies start flowing.

Of course, Nora 2 won’t be for everyone, but the aforementioned electronica and EDM heads will love it – just check out some of the many videos online for the kinds of tunes it will help you with and how easy they were to put together.

You might not feel it’s essential and, indeed, there are of course other ways of getting some of its effects. But for what it offers you creatively, especially if you are prone to getting stuck in a rut and/or are a bit of a dance or electronic fan, then it’s €49 well spent 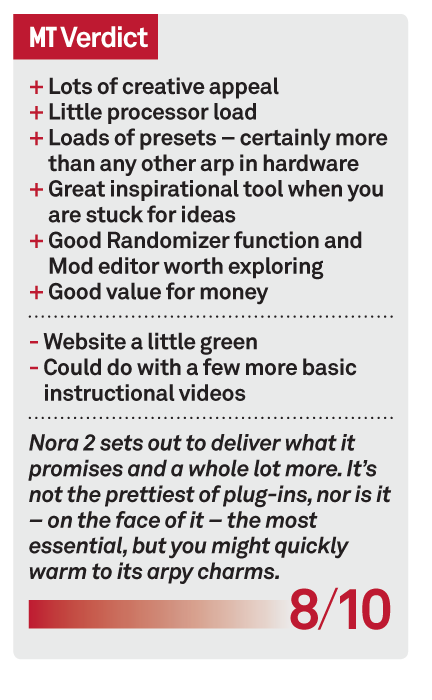 Key Features
● 8 tracks, each with an independent arp and 64 patterns
● Hundreds of presets
● Low CPU use
● 2 random phrase generators & 2 mutators
● Customisable interface with over 400 parameters