The days of paying for samples you never use could well be at an end. Hollin Jones explains how Splice Sounds could change your world… Details Price $7.99 a month Contact Via website Web www.splice.com Splice started life not all that long ago as a web service that allowed users of certain DAWs to upload […] 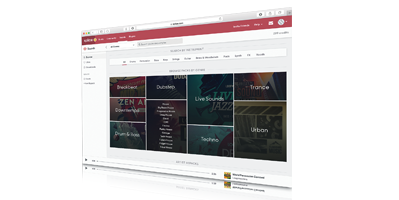 The days of paying for samples you never use could well be at an end. Hollin Jones explains how Splice Sounds could change your world… 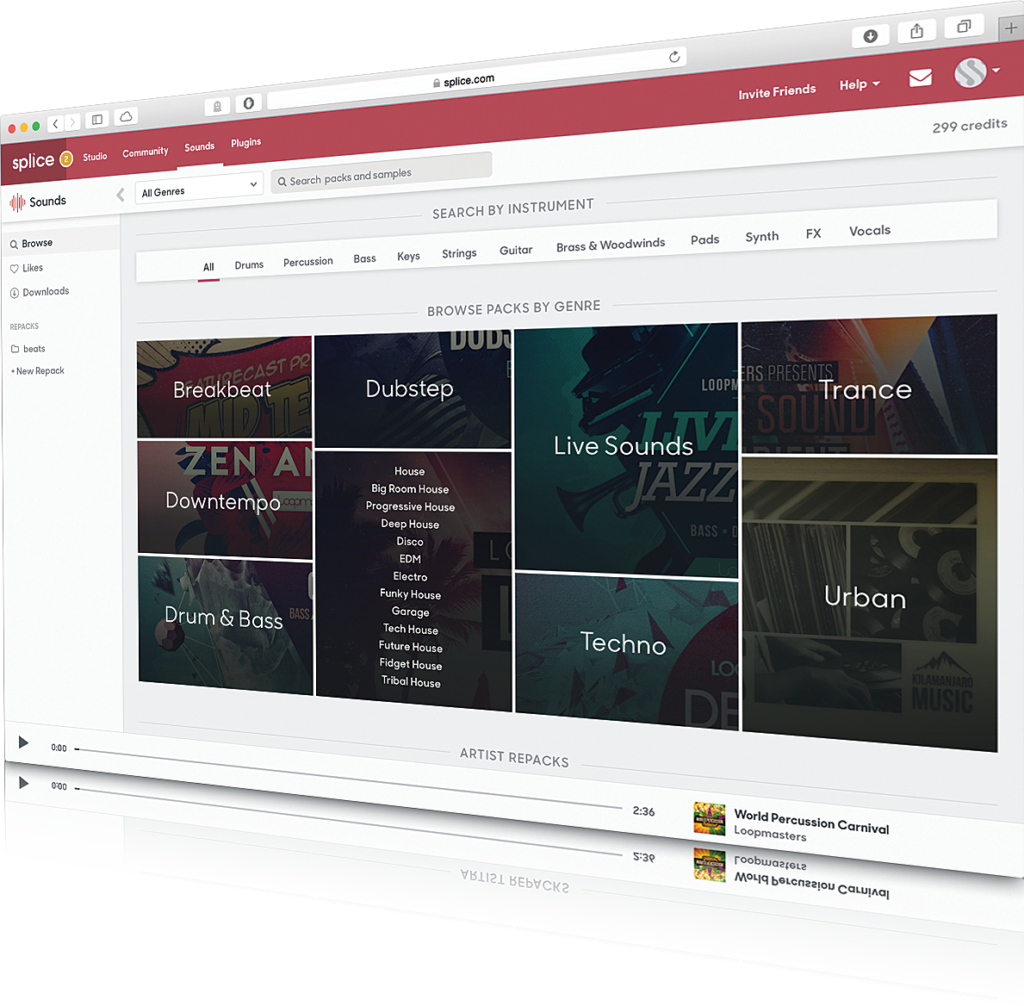 Splice started life not all that long ago as a web service that allowed users of certain DAWs to upload their raw project data to the cloud and then collaborate with others. Or, store their own work in the cloud so they could open it on any computer to keep working on it. That free service is called Splice Studio, but the company has now created a different kind of service: Splice Sounds. Claiming to be a new approach to buying samples, it’s the kind of thing that has become possible only in the last couple of years with advances in web and mobile technology.

So What Is It?
Splice Sounds is an online catalogue of royalty-free samples – 700,000 and counting – from some industry-leading figures, companies and artists. Where it differs from conventional sample packs is that it is entirely database-driven yet friendly to use. 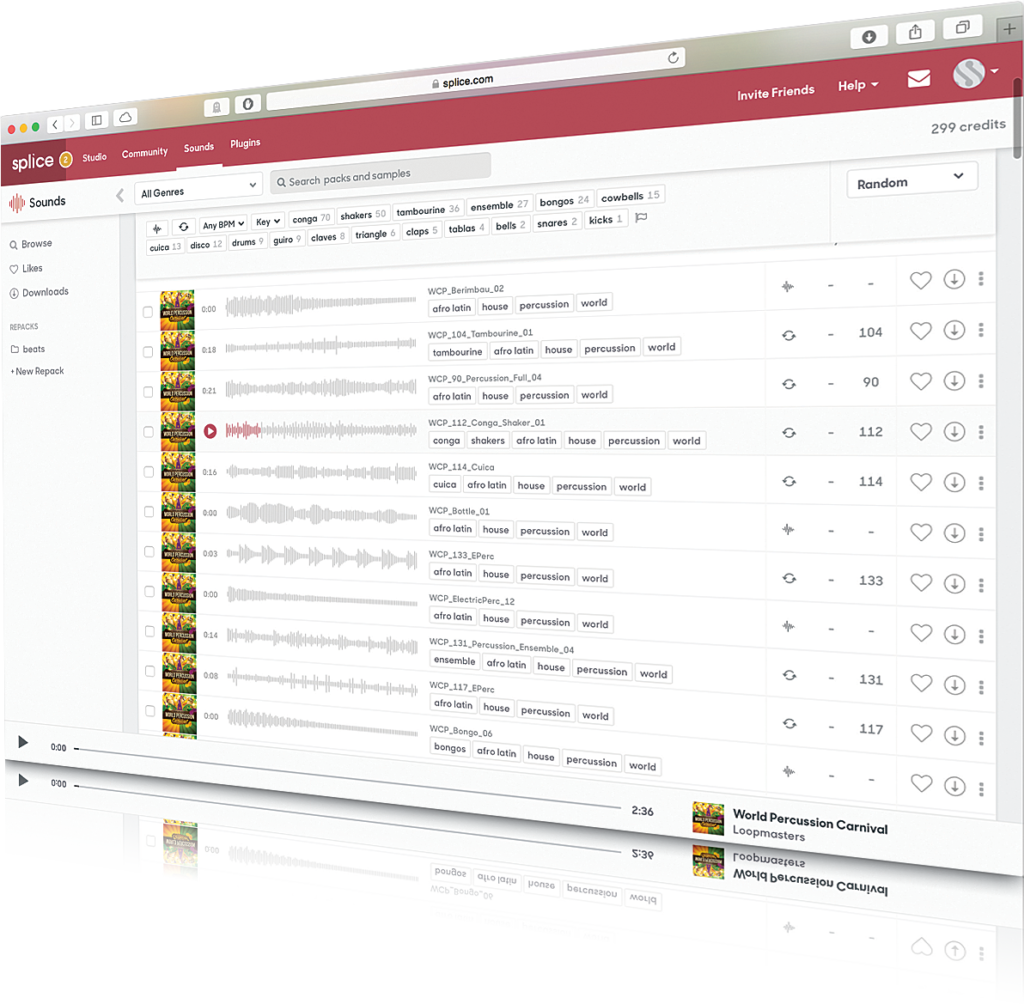 The developers say that they found people complaining that they would buy a sample pack and end up using only a fairly small percentage of the sounds inside it. The others were effectively useless to them. Worse, frustration with this can lead some people to pirate sample collections, which is not hugely difficult if you’re determined to do it. This is similar to the challenge faced by the recorded music industry, and Splice’s answer is not unlike the way that Spotify or Apple have responded to people’s changing music-buying habits – not to mention a way to try to discourage piracy.

The idea, in short, is to let people search, audition and buy only what they want. The problem of having to buy a 3GB sample pack to get the 300MB of samples you actually want is a real one, though it’s not really the developers’ fault. The only alternative to selling whole collections is to make a searchable, micro-payment driven online system. That requires a lot of work, but it’s what Splice has done. You pay $7.99 a month, and for that you get 100 download credits, with samples costing one credit each.

This limit is to stop people joining for a month and downloading the entire database before cancelling, which wouldn’t be very fair. It will also probably have the effect of making you consider more carefully which sounds you really do want rather than just downloading thousands without thinking. If you do cancel, you keep the samples you have already downloaded but lose access to download any new ones. You can also choose to pay $13.99 a month and get 300 samples, though it’s not currently possible to pay extra if you want to go beyond this in any given month.

The Details
In order to download sounds, you have to install a small application, and this is the same one that is used for syncing DAW project data, though the two tasks are separate things. A folder is created on your computer where downloaded files are stored, and you can audition and search them here, as well as revealing them in the file system. Files can be dragged from the Splice app straight into your DAW.

You are encouraged to manage sounds in your online account via a browser and it’s possible to create ‘Repacks’, which are essentially collections of sounds that you can manage manually: electro kicks, piano loops and so on.

This works well, though collections don’t seem to sync to your computer, so they’re easier to manage online. The samples are downloaded when clicked, but any Repacks that you create online aren’t mirrored as named folders on your computer, which would be a nice addition. Repacks can be shared online with other users, a bit like curating a playlist for Spotify, and Splice has some artists already doing this. 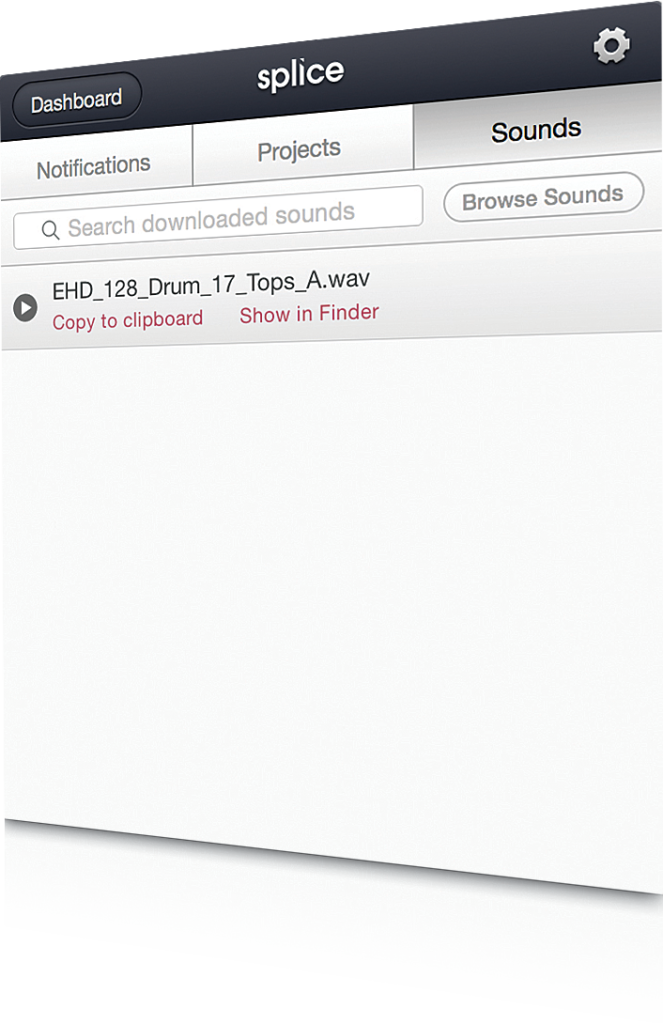 The process of searching for samples is really slick and benefits from a web interface that’s very responsive, laid out clearly and easy to use. At the top level, you have multiple search options and you can search everything using keywords, or filter down by categories such as drums, percussion, pads and so on. Then there are genre-based categories: dubstep, house, techno and the like.

Click into any of these and a selection of packs can be explored, each one curated and themed, and with a full demo track playable by clicking on it. From here, or from within a pack, you can filter down still further by selecting or deselecting tags at the top of the section. As well as the obvious tags, you get stuff such as one shots and loops, and the ability to filter by BPM or key.

This all works extremely quickly and makes a lot of sense, which is vital if you’re going to base your system on searching for specific sounds. The tagging seems thorough and the loading fast. This all works from mobile devices, too, and since you’re signed into your account, stuff that you buy or organise on the move will be reflected on your studio machine as well.

For any individual sound, you get a preview button to play it, and triggering a sound will cause any other playing sample to stop, which is really helpful in saving time and confusion. You can flag samples, download them directly and add them to a Repack by using a shortcut or dragging and dropping. Selecting more than one sample illuminates a ‘download all selected’ type of button, and there’s also a randomizer sort button that will show you a random selection of sounds if you like.

The computer arrow keys can be used to move up and down sample lists and preview them automatically, which again will save you a huge amount of mouse clicking.

Alternatives
The alternative is what’s always been there, which is to buy conventional sample packs. There’s nothing wrong with that, and some people may prefer it. You often get multi-format samples for example, with ReFill, REX and ACID versions of the same sounds, which you don’t yet get with Splice. You also get immediate access to everything you have bought, with no download limit. The two have fundamental differences of approach, however, so they’re not directly comparable.

Sounds Good
The samples are excellent, as you’d expect with partners like Loopmasters and Prime Loops providing a good chunk of the very varied and large library. The difference here is that you’re much more likely to be able to find the stuff you want, and find it quickly, than if you were having to plough through hundreds of sub-folders on your computer.

In the same way that you might not bother buying an album if it needed shipping from overseas, you would be much more likely to listen to it on Spotify. In the digital era, convenience is king and this applies just as much to music producers as to regular consumers.

Splice Sounds is a great idea and genuinely solves what has become a significant problem with the sheer number of sample collections on the market. Namely, how can you be sure you will use even half the sounds you’re paying for? Piracy is an issue, too, and just like with online music streaming services and things such as Netflix, content providers are increasingly moving towards a subscription-for-access model.

It’s happening in the music tech world, too – look at EastWest’s Composer Cloud, SONAR’s subscription model and other developers such as Adobe’s Creative Cloud. And people seem to be open to this approach, as long as the subscription price is reasonable and there are no penalties for cancellation. In the case of Splice Sounds, the pricing tiers seem very sensible when you consider the range of sounds on offer and the quality of the user experience. Expect to see more music technology go down this path. For now, Splice is leading the way for sample users. 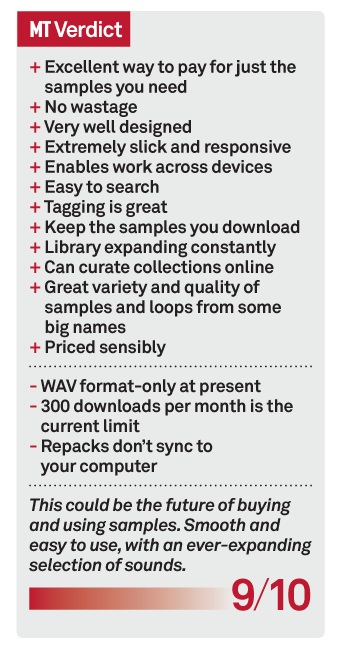