In conjunction with Spitfire Audio, Hans Zimmer and his engineering team have produced two more cinematic percussion libraries to complete the HZ trilogy. Keith Gemmell gets under their skin… Details Product HZ2 Los Angeles, HZ3 London Soloists Price £239 each Contact via website Web www.spitfireaudio.com A while back we reviewed HZ1, a truly epic percussion […] 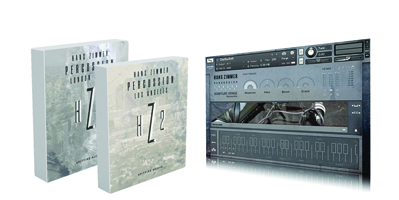 In conjunction with Spitfire Audio, Hans Zimmer and his engineering team have produced two more cinematic percussion libraries to complete the HZ trilogy. Keith Gemmell gets under their skin… 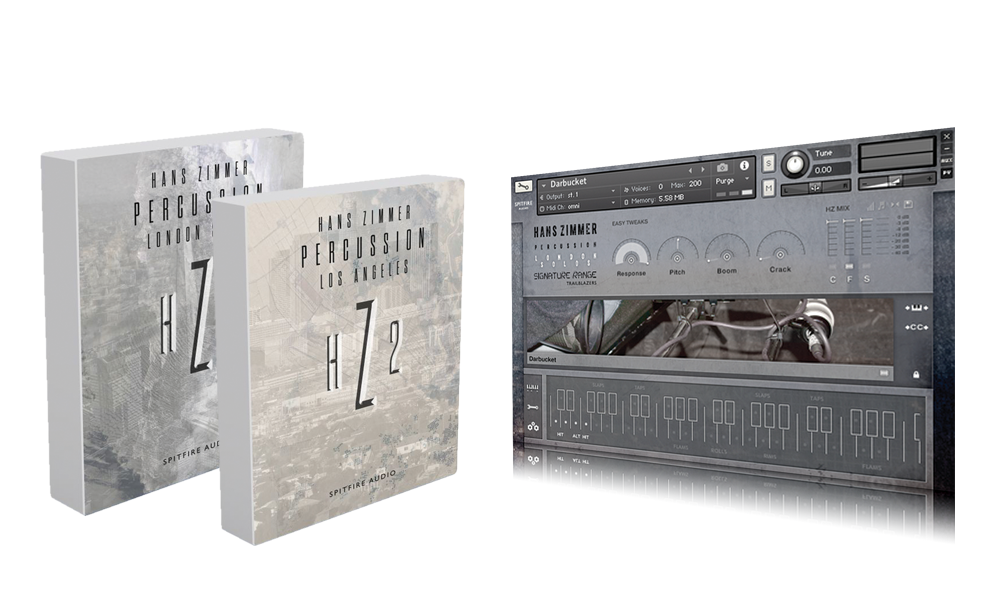 A while back we reviewed HZ1, a truly epic percussion library collaboration from Hans Zimmer and Spitfire Audio.

It featured four percussionists and was recorded at London’s AIR Studios. We now have two follow-up libraries – HZ2 and HZ3 – produced by Hans himself and the same team of engineers that worked on the original.

Battery Power
Looking at HZ2 first, at the top tier we have two main folders, a Stereo Mix and an Artist Elements section, each containing three folders for each engineer’s specific take on Jason’s unique Vistalite kit.

The engineers are Alan Meyerson, Geoff Foster and Steve Lipson. Inside those, there are three more folders for each of the locations previously mentioned. And within each of those is a full performance kit with basic GM mapping and four folders containing patches for cymbals, kicks, snares and toms – quite an arsenal. 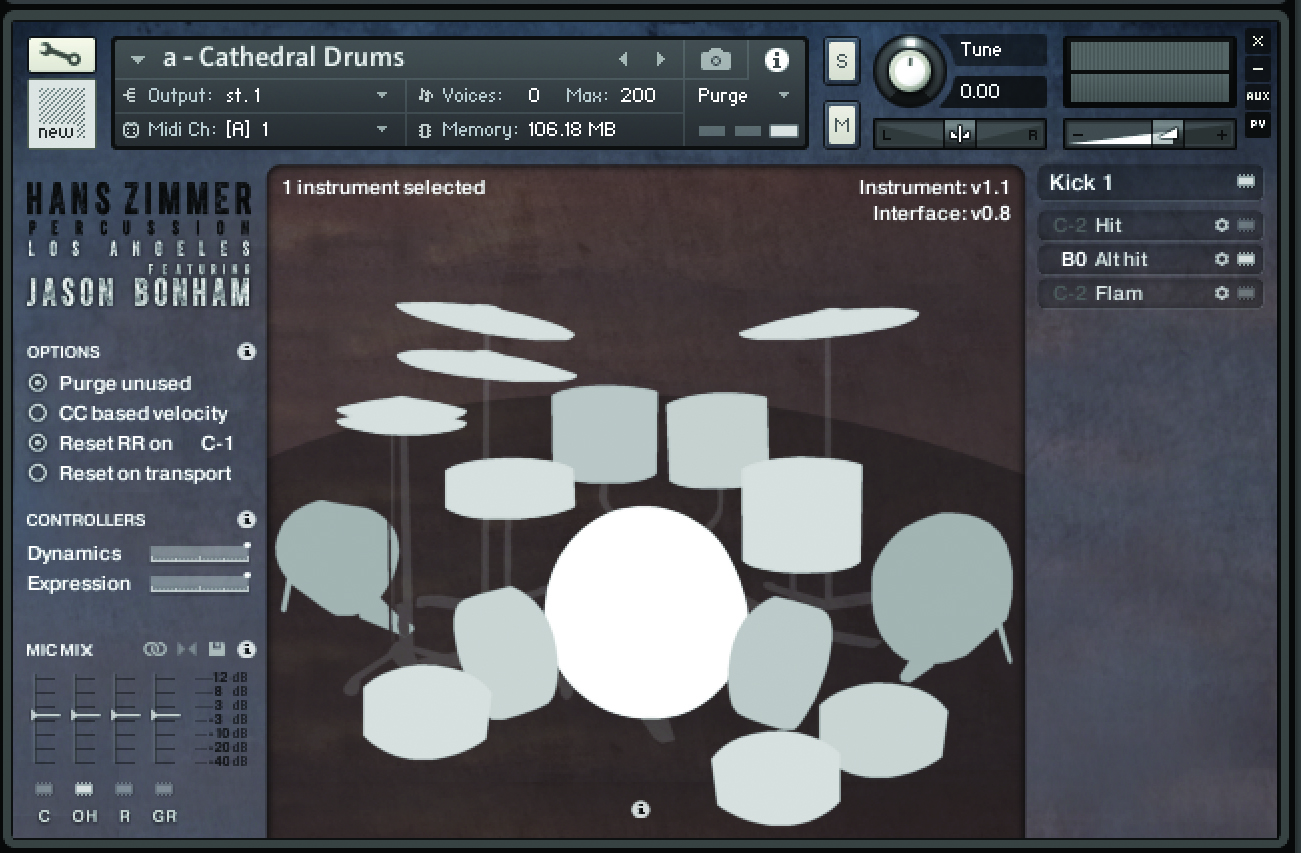 As expected, it’s a superb-sounding kit and you can adjust its sound using close, overhead and room mics, plus a special gated room mic. There’s also a stereo mix. There are plenty of controls, filters and so on, many of which are similar to HZ1, so if you own that library you will feel pretty much at home here.

Our only grumble is with the GUI – tiny black text on a grey background is tricky to read in places. The performance kits are superb and instantly useable as everyday ‘go to’ rock drum kits. However, you can go much deeper than this by loading the individual kit pieces to further tailor the sounds to your own requirements. A snare patch, for example, provides a selection of sticks, bamboo sticks and mallets, all with snare on or off.

Zimmer’s synth-drum patches are a real treat: powerful and dangerous sounding and bearing no resemblance to the tacky ‘syn drums’ of the 80s. There’s plenty of variety here: anything from dry up-close hits to big roomy cinematic thunderclaps, all very exciting and immaculately recorded.

Do You Really Need This?
One good reason for buying HZ3 is that it complements HZ1 perfectly. It features solo instruments as opposed to the ensembles found in HZ1. They have the same GUI and scripting and even share the same manual. HZ2, being kit-based is a different prospect and most musicians and producers reading this will have at least one sampled kit at their disposal. That said, Jason Bonham’s kit has been so well recorded and immaculately produced that we’re fairly confident that if you buy HZ2, it may well become your favourite virtual drum kit.

Percussive Paradise
Recorded on the opposite side of the Atlantic Ocean to HZ2, London Solos (HZ3) is an expanded selection of the solo content found in HZ1, which was mainly an ensembles library. It’s structurally similar to HZ2, with two top-tier folders – Artists Elements and Additional Mics. Apart from the Bucket and Snare, the instruments might be unfamiliar, with names like, Djun, Tombek and Dohl.

If you don’t know them, as soon as you see the pictures that are displayed in the GUI, everything makes sense and it soon becomes obvious how and when to use them. Mics are mostly close, front and surround perspectives, each with a very distinctive sound. If you need more, there’s that Additional Mics folder. Articulations are many. For example, the Dohl has Both Sticks, Top and Bottom Sticks, Both Hands and Top and Bottom Hands, all laid out in an intuitive fashion on the keyboard, making it enjoyable to play. 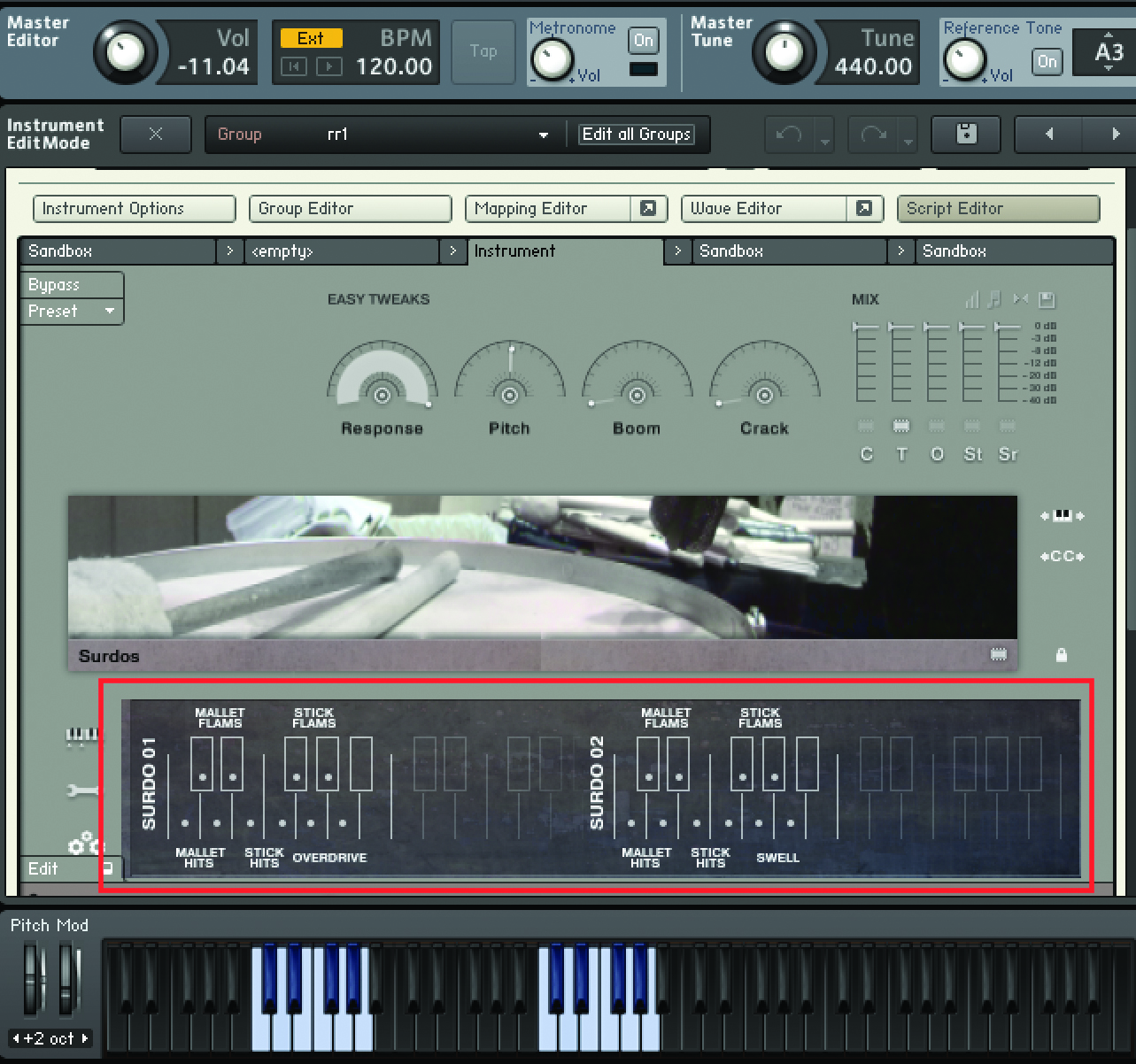 Again, like the Jason Bonham library, there’s a wealth of controls. As expected, there’s plenty of leap-out-of-your-cinema-seat material on offer here, but it’s not all blood and thunder. There’s a good deal of quieter, more delicate, detailed percussion to be found if you root around a bit.

Alternatives
There are so many percussion and drum libraries out there that choosing a good alternative can become quite confusing. For creating epic cinematic percussion, Native Instrument’s Damage is a good choice. Drums Of War from Cinesamples has been used in many a blockbuster, as has True Strike from ProjectSAM. If you want some of the work done for you, NI’s Action Strikes has many designed rhythm sets, making it easy to drum up a thunderous cinematic atmosphere

Beat Mapping
Spitfire now features a new type of interface for percussive instruments and libraries. In HZ2, there are three ‘takes’ on Jason Bonham’s kit, one by Alan Meyerson, one by Geoff Foster and a third stereo mix. All the kit pieces are displayed in the centre and, using a panel to the right, you can configure them individually and map them to a MIDI controller.

Sound Articulation
After rummaging around in HZ2, we found a bonus folder with bass drum, toms and surdos, seen here. Note the detailed articulation (highlighted within the red triangle). 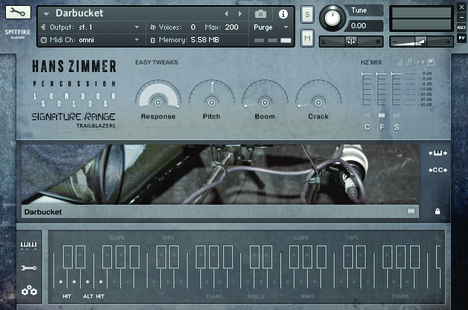 Familiar Look & Feel
The HZ3 (solo instruments) GUI is very similar to that of HZ1 (ensembles). An overview panel provides a quick and easy way to load articulations, mic mixes and a set of ‘easy tweak’ controls.

Deeper Editing
A deeper HZ3 general controls panel allows tweaking of the general settings, round robins, pitch options, velocity workings and so on.

Teamwork
Both of these libraries have been beautifully recorded and immaculately produced and offer a huge array of drum hits and sound-shaping possibilities. Hans Zimmer, as we all know, is primarily an Oscar-winning composer of countless films but he also has lots of engineering experience behind him.

Over the years, he has developed a truly unique approach to cinematic sound production that has been widely imitated. What you get here, though, isn’t a copy. It’s a recreation. He has used the same team of engineers and performers that were responsible for many of his film soundtracks, and even used many of the same recording locations. So, if you want the real thing, these two libraries will serve you well. 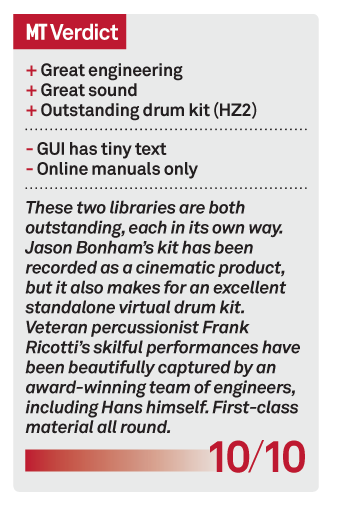