Gullfoss is an intelligent new EQ plug-in like no other, but will it reach the highest peaks or descend into the lowest troughs? Alex Holmes finds out… Price £139 Contact Soundtheory Gullfoss key features: Requires Mac OS X 10.9 or greater, Intel Processor, 64-bit plug-in host with support for AU, VST/VST3 or AAX Native Intelligent, […]

Gullfoss is an intelligent new EQ plug-in like no other, but will it reach the highest peaks or descend into the lowest troughs? Alex Holmes finds out… 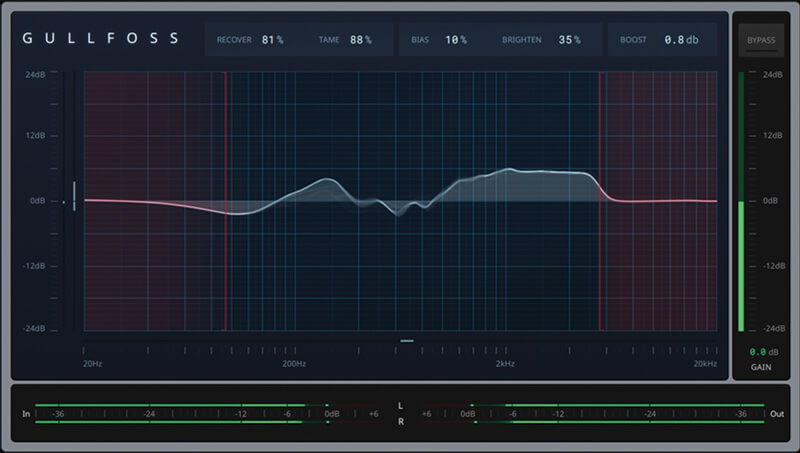 What happens when a theoretical physicist decides to design and build an EQ plug-in? The answer is Gullfoss, the first piece of software from new company Soundtheory, which is based on a computational auditory perception model and is described as a form of AI that dynamically analyses and corrects your signal.

Gullfoss transparently changes its’ frequency response more than 100x a second whilst leaving the perceived dynamics untouched and without introducing audible artefacts. Although on the surface it looks a lot like a form of dynamic EQ that’s based on a pink noise curve, there’s actually a lot more complex processing going on under the hood.

Gullfoss is currently available for Mac, with a PC version due out later this year. A large graph in the middle of the plug-in shows which parts of the spectrum are being affected and there are five main controls at the top.

Essentially, the algorithm intelligently picks out the elements in the audio signal that are dominating or being dominated in each area. If they are too prominent you can use Tame to bring them back to a better level, or if they’re too hidden, you can use Recover to help reveal them.

Aside from a smoother frequency distribution, the offshoot of this balancing is that each element is given more detail, clarity, spatial precision and presence. Although these controls go all the way up to 200%, we found the best and most transparent results came from setting them to around 30 or 40%.

You also have a Bias control that allows you to weight whether Gullfoss choses Recover or Tame in borderline cases, a Brighten control to make the overall sound brighter or darker and a Boost control that applies a smile curve or boosts the mids at negative values.

Finally, you have high and low range limiters that can be pulled in to restrict the frequency region that’s being processed. It’s a simple set of controls that allows you to dial in settings quickly, although we found ourselves wanting a little more control over the location and amount of the processing, and of the shape of the Boost.

Gullfoss is a very interesting plug-in that could be very useful for both beginners and as well as experienced engineers. It can be used to instantly improve the clarity of both mixes and tracks in a way that’s impossible with normal EQs.

The flip side of this is that it’s also hard to know exactly what’s going on, and some may feel uneasy about putting their trust in such a seemingly simple tool. If you’re starting out learning to mix, then it’s probably better to get your skills up to scratch before turning to a quick fix like this. However, if you’re more interested in composition and want to quick mix results, then this is well worth a look.

Pay at the meter

Elsewhere, there are several meters to help show what’s happening. On the left there are two vertical meters on top of each other showing the Tame and Recover amounts, along with another vertical meter showing which of the two the Bias is favouring, plus a meter along the bottom of the spectrum showing how much brightness is being added.

There are also input and output meters along the bottom, plus an output gain and bypass button on the right. Overall, it’s a clean and well designed GUI.

Enough with the descriptions though, how does this thing sound? Overall, it’s very good at instantly improving mixes and tracks, but the effects are dependent on your audio. Although more unbalanced mixes can be dramatically improved with very little effort, it can be harder to warrant the 40ms of latency and high CPU hit when it’s used on well-mixed and balanced elements and the results are less obvious.

For the most part though, everything benefitted in some way. A track with a lot of hi-hats had the top end of the transients cleaned up, so that the tick sound was more consistent.

It was interesting to see the frequency graph working on the pattern and using Recovery to essentially lift the top end out of the mix in between each high-hat hit. In this way it was smoother than using an EQ as it was happening dynamically and the louder and harsher hits weren’t being boosted.

Elsewhere, we found that other tracks had low-mid bumps smoothed out, although you have to be careful you don’t remove all the weight when feeding in an intentionally bass heavy track. You can of course use the low-range limiter to stop Gullfoss from processing the low end, or you could use the Boost dial to add some lows back in.

We actually got good results by letting Gullfoss smooth out the different low end bass notes, then inserting an EQ with a low shelf boost to lift the overall volume back up. That said, it would have been nice to have a little more control from within the plug-in.

We also found it worked wonders on vocal tracks, which can be notoriously uneven, and you can use the band-width controls to target just the sibilant parts of the signal should you so desire. With that in mind, we’ll be interested to try this out for post production duties, as it could be called in to quickly even out a voice-over or recorded location sound.

As we’ve said, it’s hard to know what voodoo is going on under the hood with Gullfoss, but ultimately, the results speak for themselves. It gives recordings and mixes a smooth and airy quality that would be impossible to achieve with a traditional EQ. It’s not going to replace our other EQ plug-ins that get called in for everyday tidying and colouration duties, but it’s a great additional tool to have in your arsenal.

True, the CPU hit is fairly high, which means we would choose to use it mostly as a mastering tool, but Soundtheory has made a fast graphics version available, which should improve performance on older machines. On the basis of Gullfoss we will be very interested to see what Soundtheory come up with next. 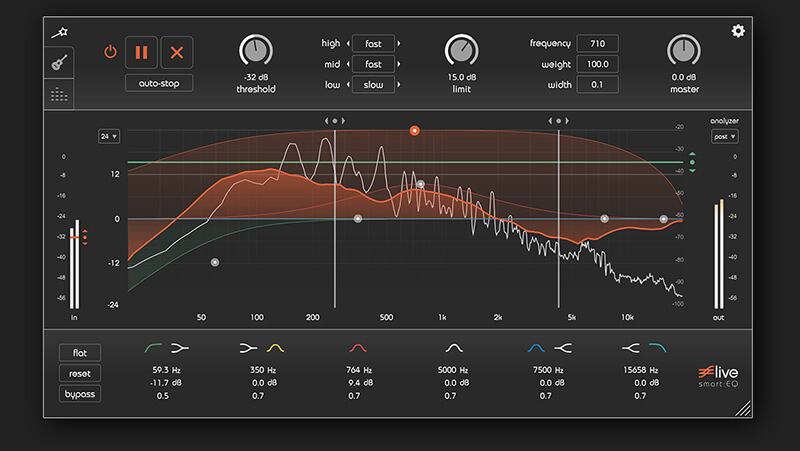 A latency-free, realtime EQ plug-in with profiles to help spectrally balance different instruments. Sonible Smart:EQ Live is designed for live use but is also helpful in the studio, with a flexible GUI that lets you focus the processing and apply additional EQ curves.

An easy to use plug-in with 25 filters spread across the spectrum that start to work as you lower a threshold control. There are 5 configurations that control how the plug-in interacts with the audio, plus a range of other controls to focus the processing.