If you’re looking for new guitar sounds, these two Turkish varieties might be just the ticket. Keith Gemmell heads East in this Soundiron Acoustic and Electric Saz review Amazon.co.uk Widgets With the large number of Western sampled instruments available today it’s no surprise that developers are looking to the East for inspiration. Take the guitar, […] 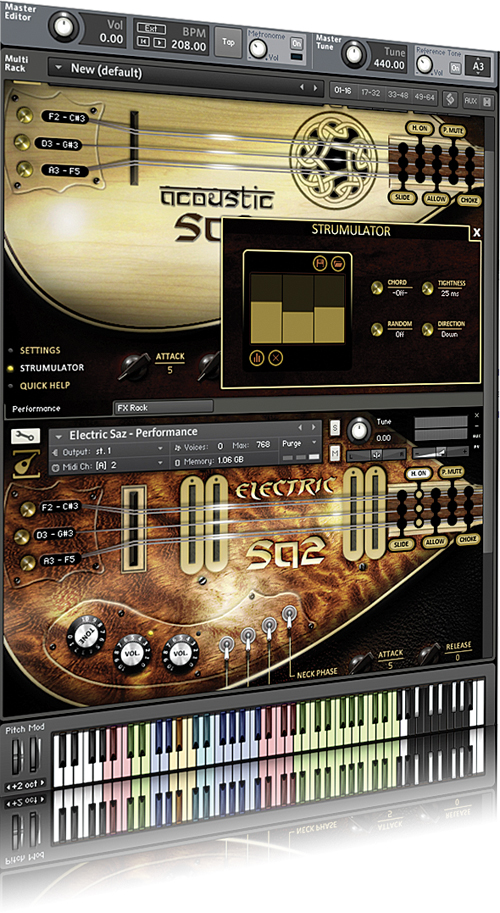 If you’re looking for new guitar sounds, these two Turkish varieties might be just the ticket. Keith Gemmell heads East in this Soundiron Acoustic and Electric Saz review

With the large number of Western sampled instruments available today it’s no surprise that developers are looking to the East for inspiration. Take the guitar, for instance. Companies such as Pettinhouse.com specialise in guitars and have nine sampled instruments on offer covering all likely Western music genres, from classical through jazz to rock.

Soundiron, though, tends to be more experimental, and its latest library is a double release – acoustic and electric versions of a traditional Turkish guitar called a saz. As expected from such a fastidious company, both instruments have been deeply sampled with a full range of playing styles (sustained plucks, palm mutes, chokes, slides, slaps and more) and an interface that closely emulates the behaviour and characteristics of a real saz. A full version of Kontakt 4 or 5 is required to run the program.

Super Slides
The saz is similar to a lute in construction, but unlike the lute it’s fretless, which allows much sliding in its playing style. With seven strings in three runs (low octave, middle single and high unison) it sounds somewhat like a 12-string guitar. Wide, expressive slides are possible and these have been sampled on all strings with multiple velocity layers and 4x round-robin. However, because each string can be controlled independently, at first sight the GUI appears complicated, with myriad keyswitches and controls. Nevertheless, it’s a logical layout that doesn’t take long to get used to.

Chords can be played one-finger-style with the aid of a ‘strumulator’ based on real saz techniques. While doing so, it’s also possible to use the top string to play a melody. There’s an excellent arpeggiator, too, that can be used to create not just broken chords but complex runs, melodies and patterns. Also in the experimental vein is a tuned percussion preset, enabling you to get creative with the saz’s percussive thumps, slide noises and choke articulations.

In use, both the acoustic and electric versions are similar except for the extra pickup controls present on the latter. Both, too, include a comprehensive guitar-style effects rack that really does help to bring the instruments to life. It’s derived from Kontakt’s built-in effects and, therefore, Kontakt 4 users will not get access to as many sounds as those using Kontakt 5.

There are plenty of presets available for various uses though the full performance preset is, naturally, quite processor-intensive. However, we didn’t encounter any significant problems and should you, there are several less taxing versions among the presets.

Saz Pizazz
The saz makes a truly vibrant sound – warm, gloriously twangy and ideal for featured solo pieces. Unlike when working with a conventional sampled guitar, you’re free from preconceptions – in other words, it’s easier to play what sounds good without worrying about whether the music you’re creating sounds authentic. You’re not constantly thinking about whether a real guitarist would have played this or that, which, we believe, is its greatest strength, making it ideal for composing new pieces. On its own, without effects, it can sound a little thin due to it having just three string runs. Chords, of course, need to be kept relatively simple for best effect. Start layering the saz, though, and the sound quickly becomes huge, rich and expansive, particularly with the use of the slide samples.

Eastern Promise
Until now, the saz appears to have gone largely unnoticed outside of Middle Eastern cultural music. With the introduction of sample libraries like this one, though, that may be about to change. We wouldn’t recommend buying it to replace a good conventional guitar VI but we do think it will make a great accompaniment to one. Its ability to blend with Western rock styles is a big plus, and when used imaginatively (excellent demos are available online), it’s capable of adding a new slant to conventional rock guitar genres.

Both the acoustic and electric saz sound terrific and are fairly easy to learn and play. Whether emulating Middle Eastern styles or blending the electric with bass and drums, superb results are obtainable.