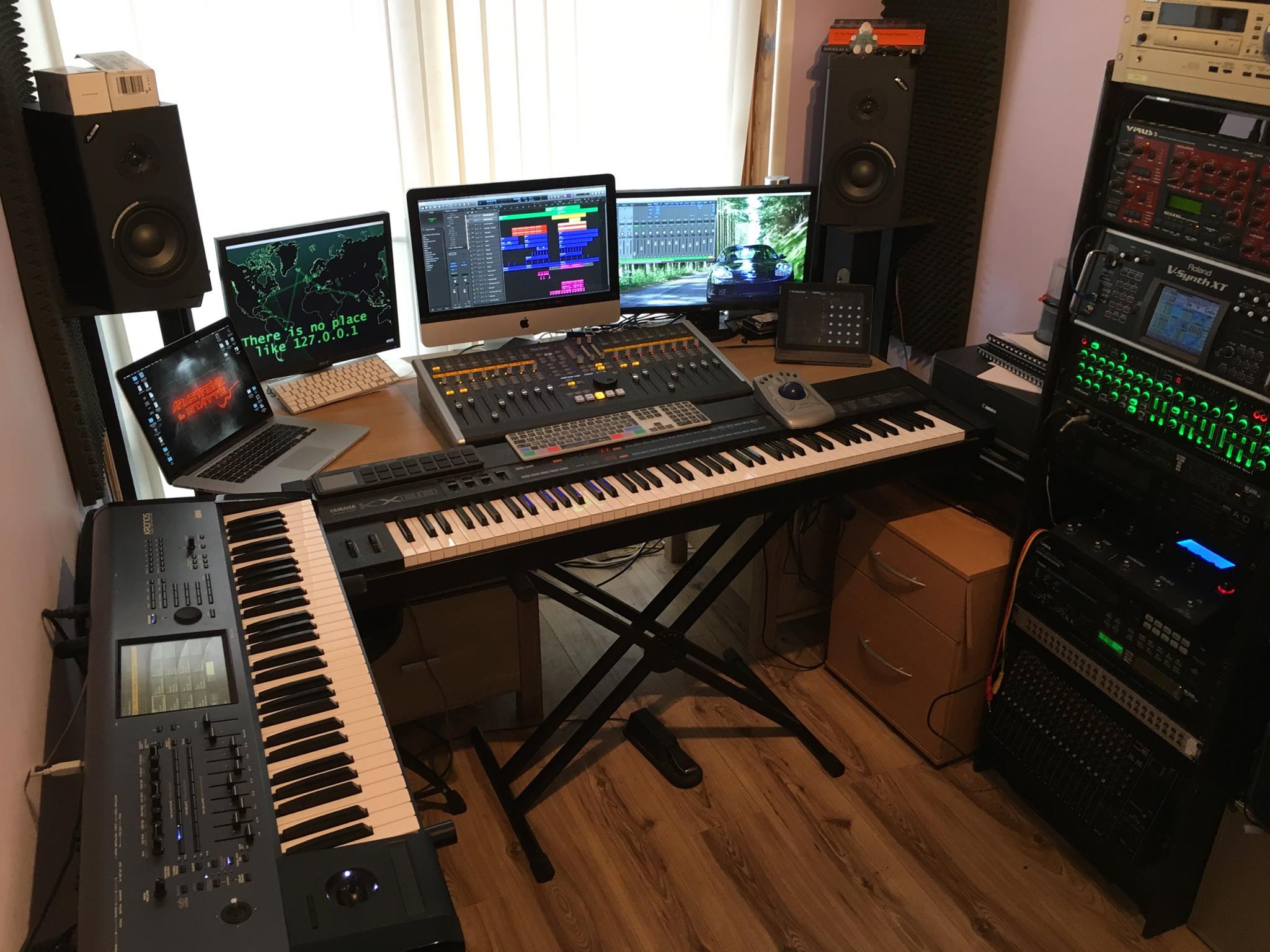 Remote controlled mixers are becoming popular both for live and studio use. Andy Jones tests the latest from Soundcraft, the Ui16. 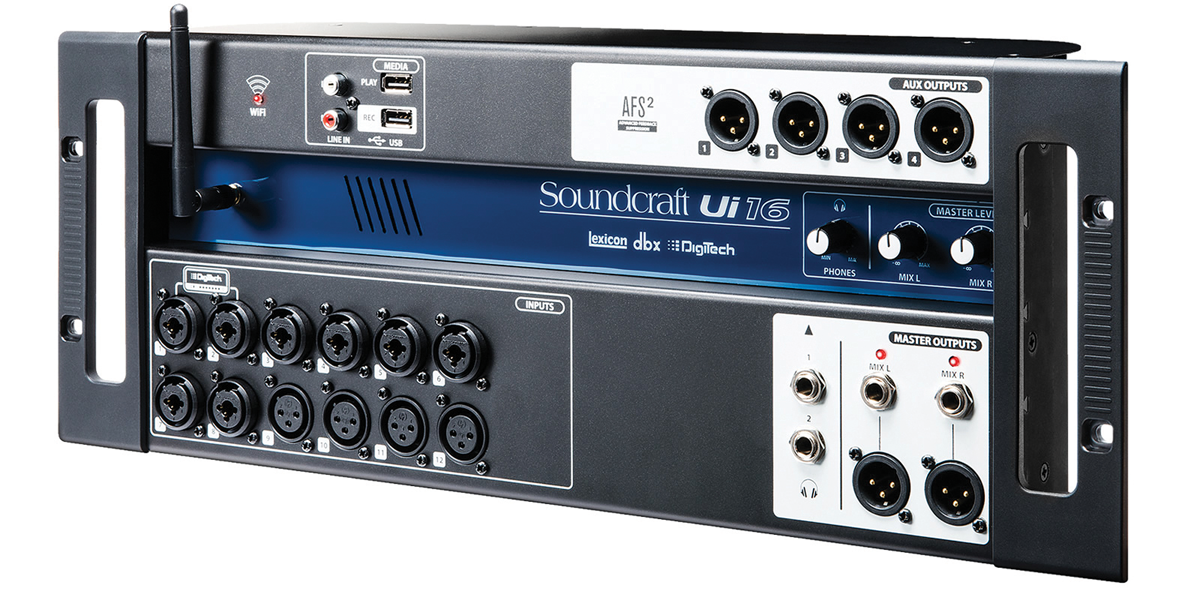 The Humble Mixer is Making
a studio comeback. There are small analogue models popular for singer/songwriter set-ups; larger ones with DAW interfaces included that offer multiple inputs for analogue gear to connect to your DAW; and a new range of ‘remote controlled’ mixers, where you get the hub of the unit – usually in rack form.

I say ‘controlled’ as, in the case of the Ui16 from Soundcraft, you operate levels, mixing and effects with your computer, tablet or smartphone via Wi-Fi and a web browser – no apps, no separate software, you just need a network connection.

This should mean you can use the system anywhere, so it’s especially useful for bands on the road. But the Ui16 also comes packed with other features that make it an attractive studio unit, including effects and amp modelling from other brands in the Harman group, such as dbx, Lexicon and DigiTech.

Practical, Not Eye Candy
Mixers such as this – and it’s not the first I’ve looked at – are giving you the interfacing bit in hardware and the fancy stuff in software, so are rackable, sturdy and not that attractive.

But the Ui16 is also practical. With all of the control done via your tablet or computer, the connections on the hardware can be within reach at the front of rack, rather than hidden at the back of a mixer – all good in my book. You get eight XLR mic/line combo ins, four XLR ins and two RCA line ins. The first two XLR combos double as Hi Z inputs for guitars, and also neatly route through the DigiTech guitar processing.

You get four XLR Aux outputs, plus level controls for two sets of headphones and left and right main outputs (jack or XLR). Around the side, you get footswitch, USB and Ethernet connections. The USB sockets at the front are specifically for playback or software updates, or direct master output recording (onto a suitable drive).

Setting Up
Getting the Ui16 up and running couldn’t be simpler – and I really mean that. Simply power the unit up, wait for the Wi-Fi light to stop flashing and you should then be able to pick it up as a hot spot on your computer or tablet/phone. Select it as such and then go to http://ui-mixer.io, select your screen size (computer or phone) and there it is: complete control of your mixer.

The designers have really thought about who is using this mixer, and where and how they are using it. There’s no messing around, just one password (the default one in the manual on your first boot up) and you are ready. With no apps nor extra software needed, anyone can use it, regardless of experience – no technical knowledge is required.

We tested the process using a MacBook Pro with no problems whatsoever. The only thing worth noting is that if you lose power on the mixer you may have to go to Network Diagnostics to pick it up again on reboot – fairly standard Mac stuff.

The software in the web browser is functional and very straightforward. It’s not going to win any design awards for prettyness, as it’s designed as a cross-platform interface, so what might seem big on a MacBook screen (compared to, say, Logic) is like it is because it’s also designed for fingers to control by touch with iPads, etc.

You can’t, then, increase or decrease control size, as it’s a set format for iOS (hence choosing your phone or tablet screen size on start up). This means you get rather less on-screen than you might in your DAW, so you will have to jump to other screens more often.

It’s not a huge negative, and iPad users will easily do it via touch. You would expect more of the Apple touchpad swipes to work on
a MacBook, but you end up finding the cursor keys are more effective. Again, no biggie, just a tad surprising.

The screens of the software are shown above. You can step through each one using menus at the top-left, and you get everything from main meters to effects sends. The EQ section is particularly pleasing, offering multi-band and the curve option shown above where you drag and drop pointers.

Importantly, the results are great both here and within the effects section where reverbs, delays and the like are easily brought in. And with dbx, Lexicon et al providing the muscle, you won’t be disappointed with the sound.

Overall, using the software via the browser is a joy. It takes only a short time to get acquainted with it, and you quickly get into the depths of mixing, sending, adding effects and routing. 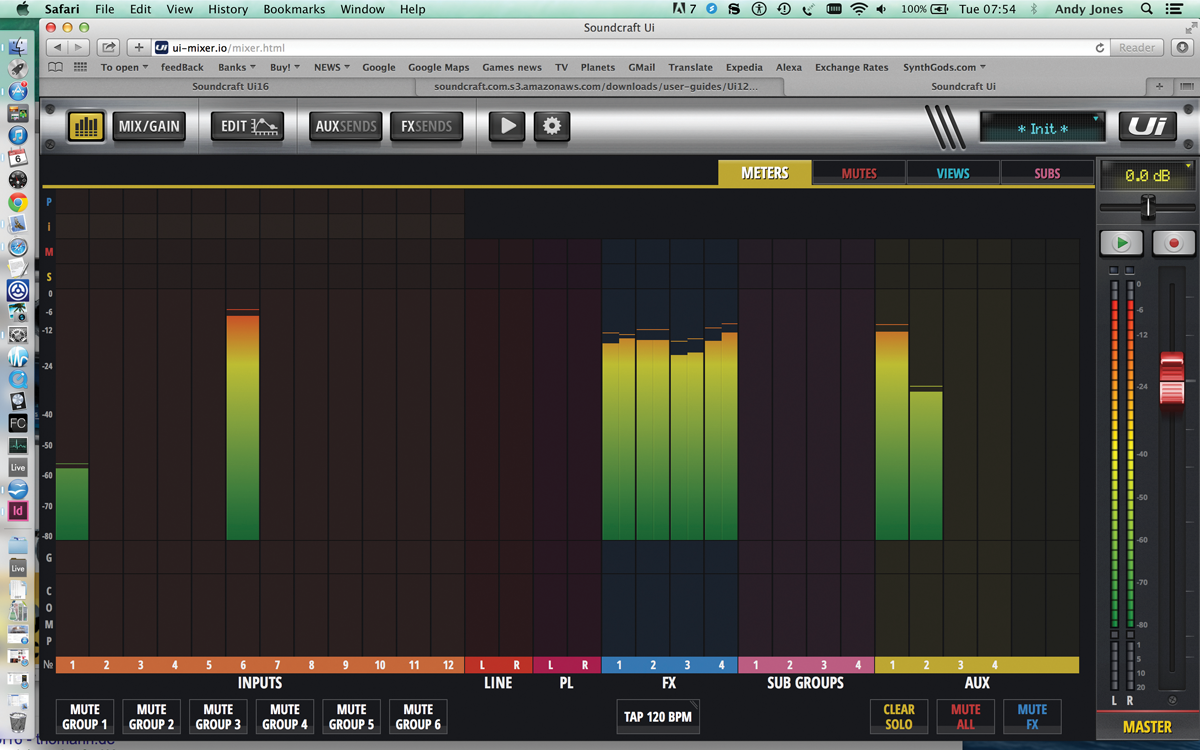 1: Meter Screen – Running from left to right in the software, this is the meter screen. We have two inputs (1 and 6) on the left, with all four effects running and the first two Aux sends. 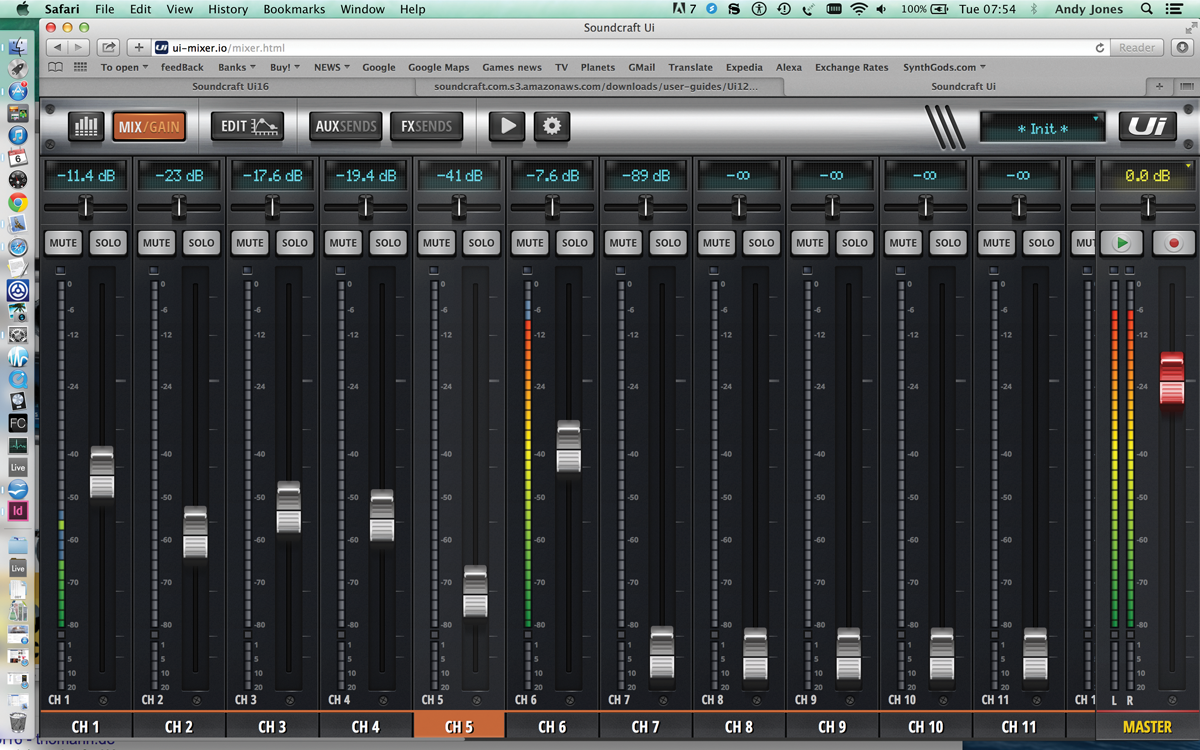 2: Main Mixer Faders – Here are the faders to control those levels – inputs 1 and 6 are shown. Use the cursor keys to step right to see the FX, Aux and Group channels. 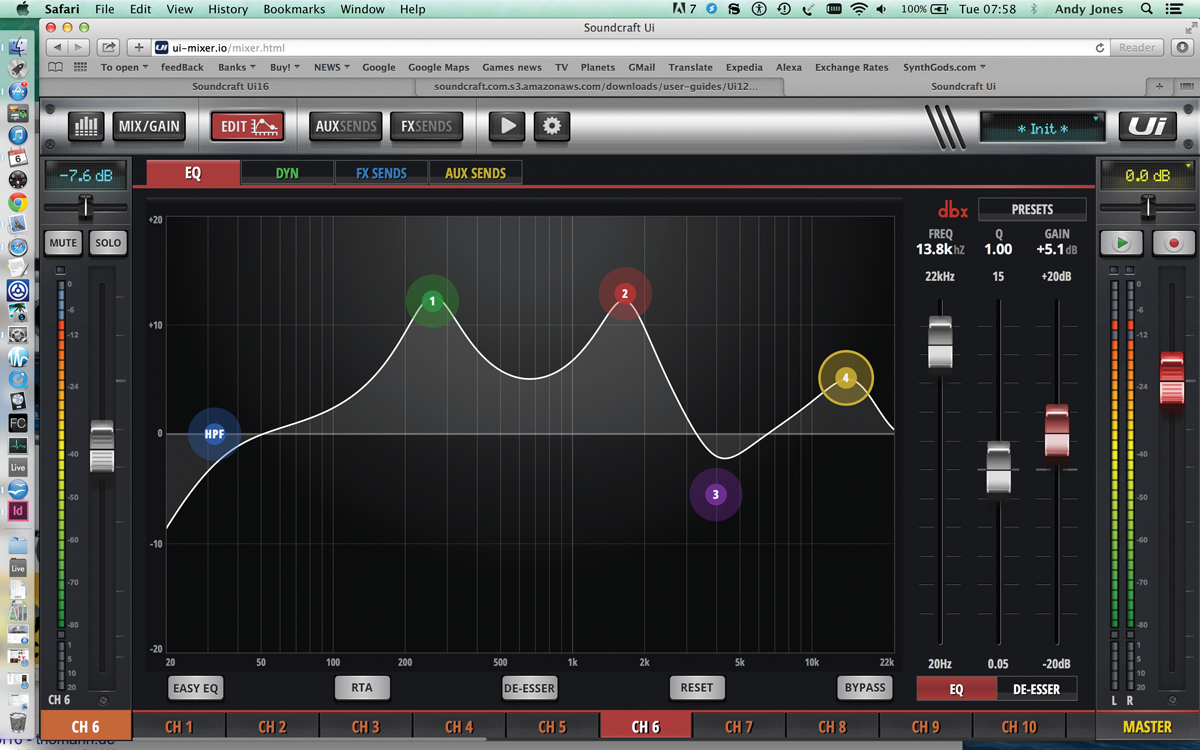 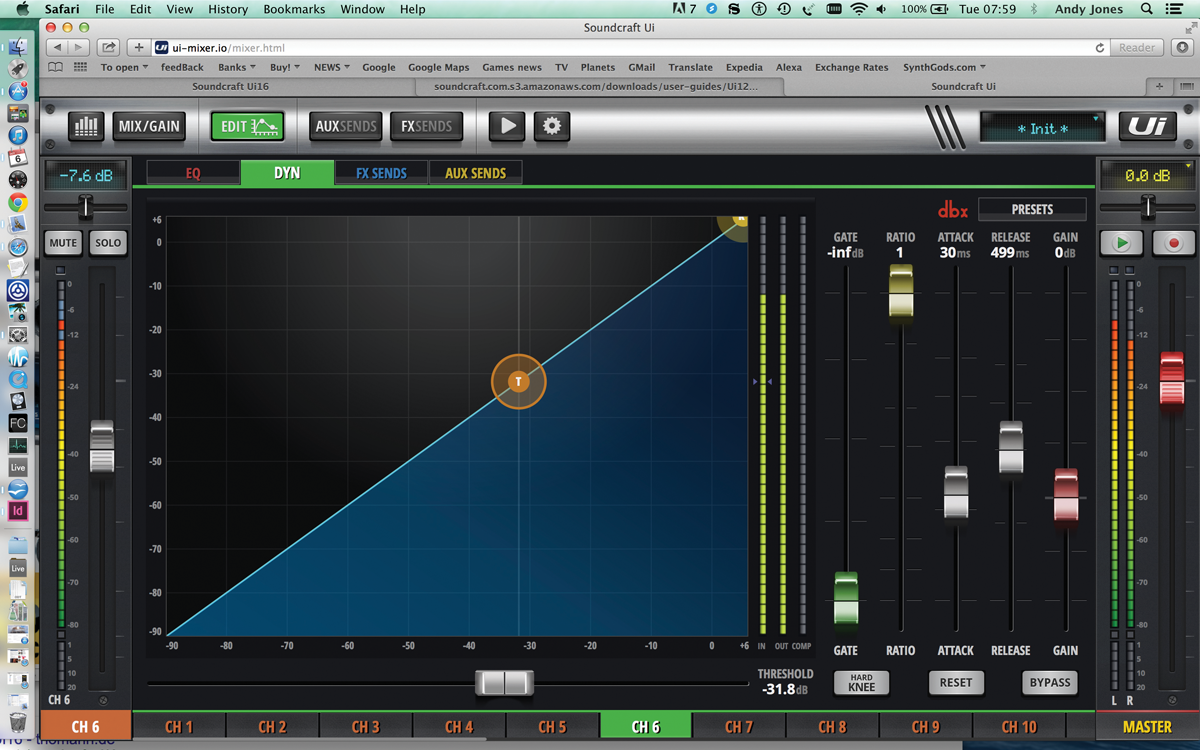 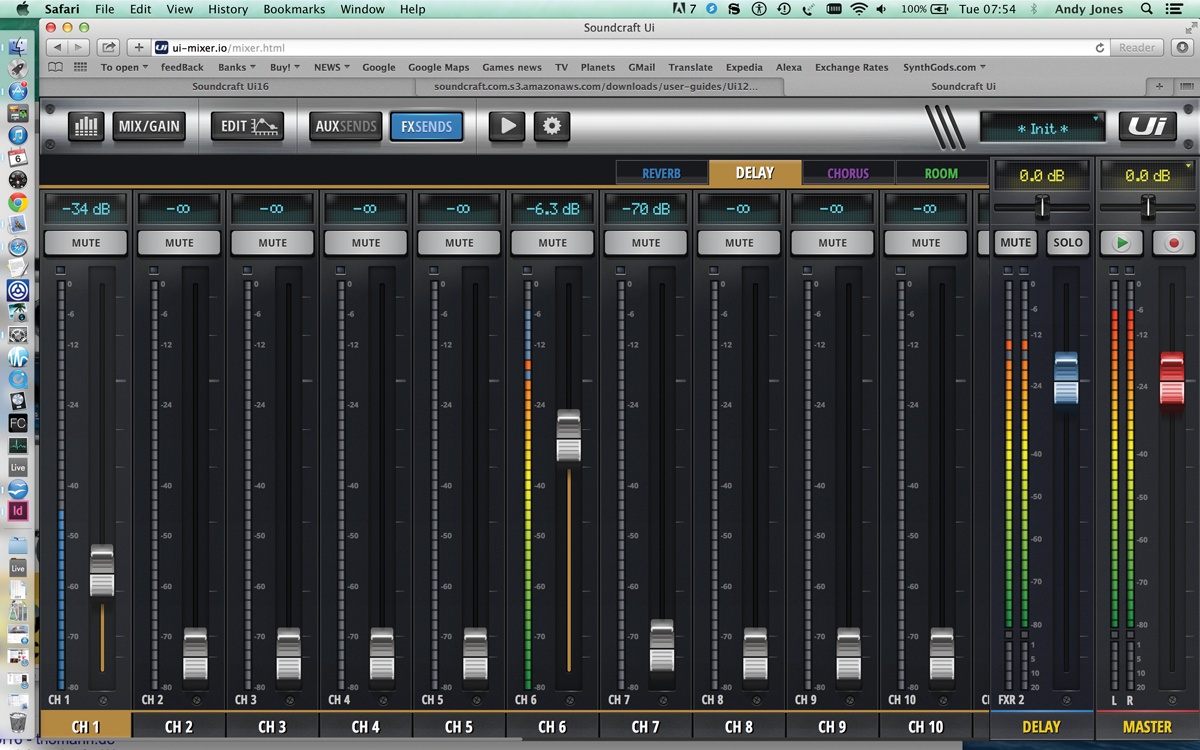 5: Effects Sends – Effects and Aux sends can be controlled within the last two sections of the Edit menu, but each also has a separate menu to adjust levels per channel. 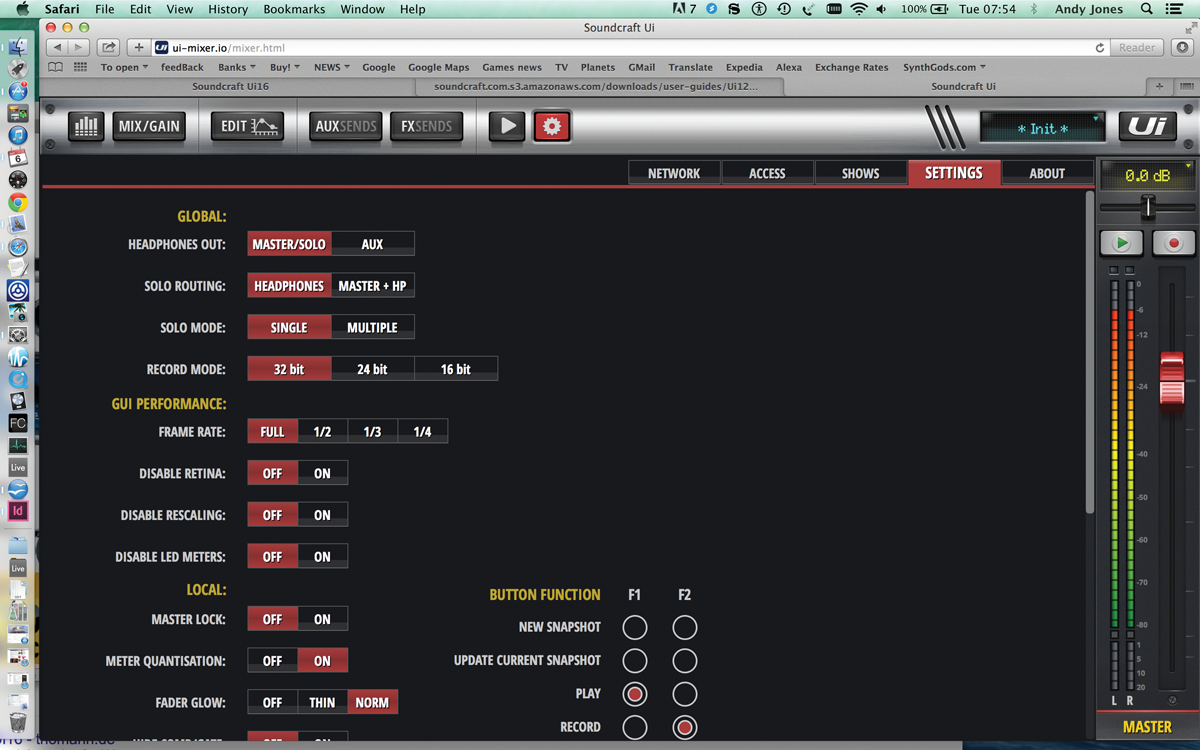 6: Global – Finally, the right-hand menu shows all Global parameters. You can adjust things such as recording quality, function button control and even the fader glow.

Alternatives
Presonus’ RM16 is the closest mixer to the Ui16 that I’ve looked at in terms of external control. It features 16 XLR inputs, 32 internal channels, effects, 8 XLR outs and some great UC Control external software that can again be used via computer or tablet, this time as
a standalone app. It does have more features, then, but also costs twice as much at £1,099.

Conclusion
The Ui16 sits between a fully-software and fully-hardware mixer. You get the connections in hardware, but the control is obviously software. I did think that, because Soundcraft is teasing us with a big lump of rack hardware, I might then miss the tactility of the front end, but I didn’t at all.

In fact, I love the concept of the Ui16. Every-day musicians can be tapping into Wi-Fi spots and mixing with iOS devices, and can have access to amazing effects and outboard from the big guns in music technology. But the best bit is they won’t even realise what technology they are using, because the Ui16 and the concept behind it is so simple to use and so transparent in operation.

Sure, I can see it as more of a live mixer than a studio one, but on the road the possibilities are many and varied. Small venues can have a mixer that anyone can plug into and use, and bands have something they are used to taking anywhere, which can easily plumb into a venue’s PA. But the best bit is to see new tech being used in such a zero-fuss and downright useful way. Top marks go to the designers, as it’s hi-tech, practical and easy – not always ingredients that mix so well 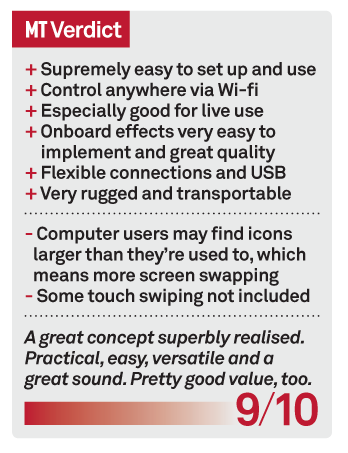