Sony microphones might not have quite the cachet among recording engineers that brands like AKG, Neumann or Telefunken have, but among those in the know, the Sony C-38B and C-800G are up there with the best of the best.

The C-800G in particular is one of the microphones of choice for R&B singers, having been used by the likes of Michael Jackson and Mariah Carey. However, the microphone is just as at home capturing acoustic guitar or piano thanks in part to its larger-than-life bottom end and rich upper frequencies.

Launched in 1992, the C-800G is still under production, but will set you back in excess of $10,000, pricing it out of the range of most of us working in the modern audio industry. But late last year Sony announced a new microphone, derived from the C-800G, which would bring much of the sonic character of the mic to a less affluent audience.

The C-100 is not just a budget C-800G though, but a completely new microphone design, with its own technological advancements, and a staggering frequency response up to 50kHz. 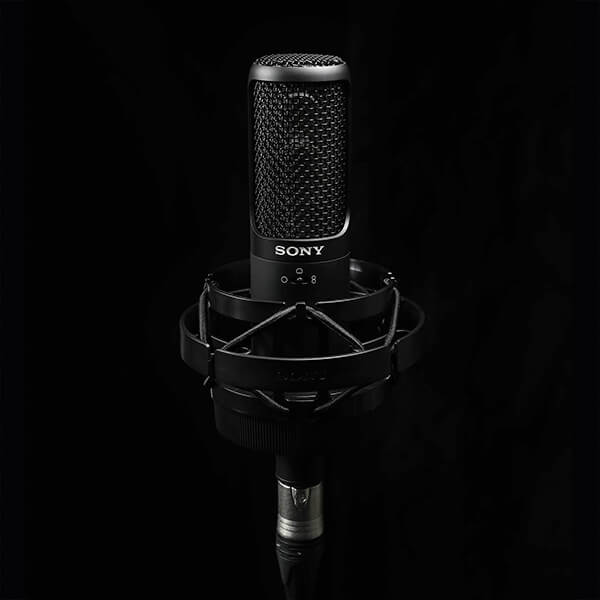 To achieve this, Sony has fitted the C-100 with two capsules, positioned one above the other, in a similar way to the woofer and tweeter design of a standard two-way loudspeaker. The primary large-diaphragm capsule is configured to do most of the work, capturing audio from 20Hz-25kHz, while the secondary capsule, a small-diaphragm back-electret design captures the ultrasonic audio from 25kHz-50kHz.

By pushing the crossover up to 25kHz, Sony ensures that the higher noise floor of the small-diaphragm capsule is restricted to only the very upper frequency range, while the bulk of the work is done by the quieter large diaphragm capsule.

Furthermore, by pushing the crossover frequency into the ultrasonic range, any artefacts caused by the crossover are also pushed into this range. That said, how valuable capturing audio that far outside of the human hearing range really is, is up for debate, particularly if that audio is then stored in a digital file at a sample rate of 44.1kHz which, even with ideal filters, can’t represent audio beyond the Nyquist value (22.05kHz).

The primary capsule can be switched from cardioid to omni, or figure-of-eight, while the secondary capsule is always in cardioid. This isn’t all that much of a problem however, as frequencies in this range are quickly absorbed in the air, meaning only direct signals from the source are likely to reach the capsule at all.

All I want for Christmas

Visually, the C-100 has a strong family resemblance to the C-800G, although since the C-100 is solid-state it doesn’t require the large heatsink, which gives the C-800G its signature aesthetic. The body is made of a two-part metallic structure, similar to the C-800G, which Sony claims helps to prevent acoustic vibration and plays a part in keeping the noise floor down, and improves the clarity of the signal. Although to what extent it is hard to say without hearing the C-100 in a more traditional body.

What is clear from the moment we turned the C-100 on is how sensitive the mic is. The air conditioning in the vocal booth is far from a noisy unit, and usually we’re happy leaving it on while we record, but with the C-100 the air con had to be turned off during takes, something we’d rather not have been doing during this exceptionally hot summer.

The results though were entirely worth the struggle with the heat. In a vocal shootout for a female R&B-style singer, comparing an original C-800G, a Vanguard V13, and the Townsend Labs Sphere L22 (using the C-800 model), the C-100 was our choice every time.

The response was cleaner, clearer and more exciting than any of the other mics. It had a very similar character to the real C-800G, but with a much cleaner response – although this could simply be down to the age of the C-800G in question and imply that it would benefit from a service.

Vocalists deserve to spend a little time testing out as many mics as they can get their hands on before settling on one that suits their voice and style. Obviously depending on your price-point, higher-end condenser microphones such as the C-100 are extremely recommended, considering that we always stress the importance of recording quality at the source. 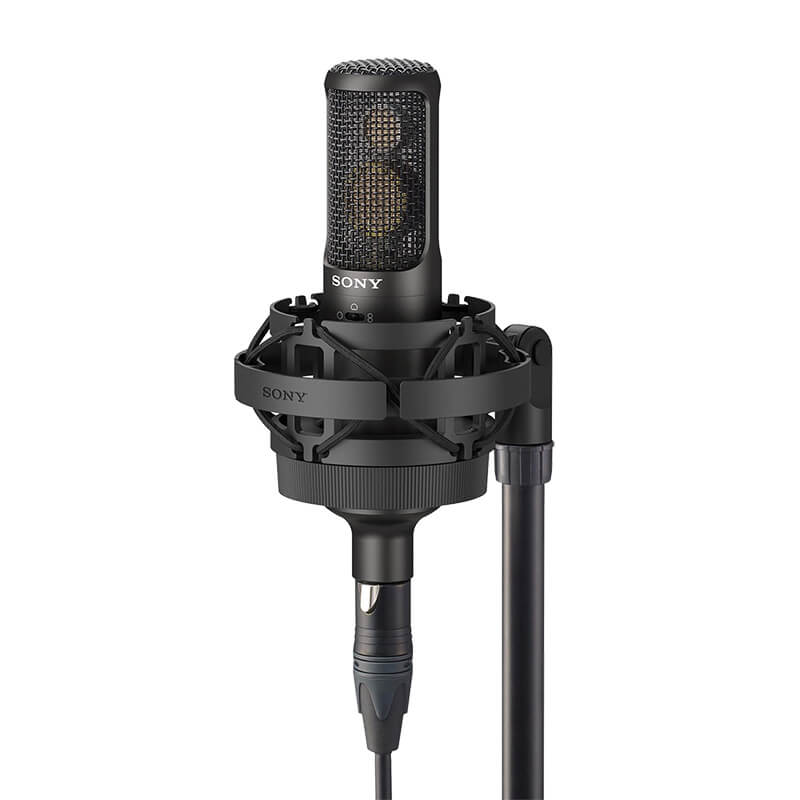 However we’re quite aware that not everyone has the dosh for this calibre of mic. That being said, if you can afford one, then the C-100 is flavoured in such a way that for the right voice, nothing else will come close.

While we really liked the Vanguard mic, it has a very different flavour, which could compliment the C-100 well in your collection, pushing the mids forward where the C-100 tends to pull the low-mids back in the presentation, pushing the upper frequencies in a natural and open manner, which along with the big, bold bottom end results in a sort of smile-shaped emphasis curve, which was absolutely stunning on our vocalist.

There’s an airiness to the top-end, as if the signal has already been processed and fans of the UBK Clariphonic or Maag “air band” type EQs will wish they’d just been able to record with this mic all along.

The Sony C-100 certainly does not produce a flat uncoloured representation; this is a colourful microphone, which means it isn’t going to suit every source you put it in front of. But match the C-100 with the right vocalist and a touch of compression and the vocal will sit above even the densest of mixes without any additional EQ.

If your vocalist needs something with a little more power and grunt then this may not be the microphone for you, and you might be better off with the Vanguard V13. In fact on our own less polished vocal takes during the shootout, the Vanguard V13 was our preferred option, and sitting the two voices next to each other in the mix was simple, as the two voices complemented each other wonderfully in part thanks to the mics pushing each of the voices in slightly different ways, so that neither one clashed with the other.

We had similar results on other sources. The C-100 produces wonderfully clean, sounds, which helped to bring a sheen to our upright piano that we’d never heard before, while our acoustic guitar truly glistened. On our Fender Deluxe cabinet, however, the C-100 lacked any guts, enhancing the fizzy top-end and chime, while pushing the body of the guitar part back in the mix.

A touch of 200Hz and a low-pass filter helped to bring the grunt of the amp back to life, but we got much better results with our Heil PR 20 dynamic mic, which pushes the lower-mids forward at the expense of the upper range, which suits the sound of the amp far more than the C-100.

It is exactly for this reason that studios maintain large mic cabinets. We might all have our favourites, but you shouldn’t aim to record an entire song with only one mic, no matter how good it is. A mic with a flat response might layer better with itself than a coloured microphone, but it won’t flatter anything, while a mic that’s designed to flatter one source might ruin another.

The C-100 fits firmly in this latter camp, it will flatter some vocalists, producing crystal clear highs that soar above the mix, while pushing the strengths of other vocalists to the back. We’d strongly recommend testing out the C-100 first to make sure yours is the style of voice it flatters. If it does you’re in for a treat with this superb mic.

The AKG C12 is one of the most highly revered microphones of all time, inspiring a multitude of copies, many of which have also gone on to become classics, like the Telefunken ELAM 251. The C12 has a flavour which also emphasises the upper frequencies.

If the AKG C12 VR is a little out of your budget, then the Peluso P12 is inspired by the same design and is a strong competitor. The P12 uses a 6072 valve and a custom Cinemag output transformer to deliver the same airy top-end as the great AKG originals.