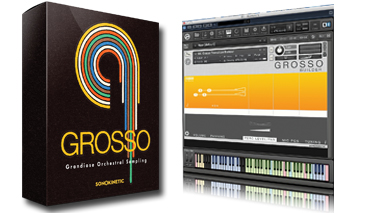 Sonokinetic rate Grosso as their best orchestral phrase-based instrument yet. Keith Gemmell cues it up… 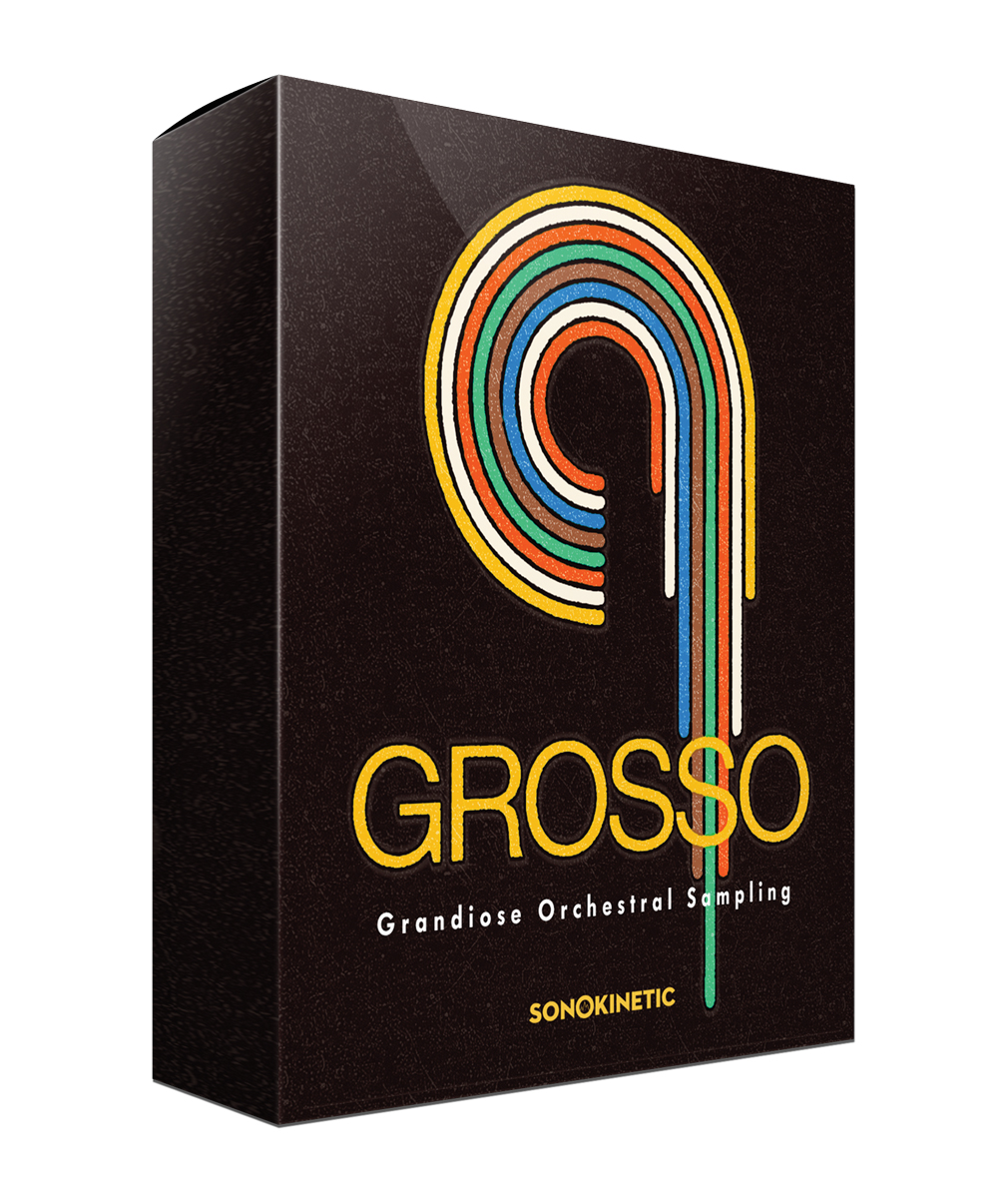 Sonokinetic’s last phrase-based orchestral library, Minimal, received such a positive response that a sequel was inevitable, say the developers. Made up of tempo-sync’d orchestral phrases it was an instant hit with composers. Built along similar lines with a section-by-section approach, their latest product, Grosso, is a grand orchestral sample library for scoring action, epic fantasy and chase scenes.

Being resource-hungry software, the content is available in both 16-bit and 24-bit versions.

Orchestral Grandeur
The library is grouped into five separate Kontakt patches – strings, woodwinds, brass, percussion and choir. Strings and choir are split into low, mid and high sections, and woodwinds and brass into low and high. Percussion is divided into taiko and traditional percussion. There’s also a transition builder for creating woodwind and brass segues.

Playing Grosso from a keyboard controller couldn’t be simpler – you just play major or minor triads, and all inversions are recognized. There’s an abundance of phrases, and you can mix and match different ones from the high, mid and low sections. You can switch them into half- and double-time and they’re chosen using icons that graphically represent their melodic and rhythmic shape. Some may find this method odd (we certainly did at first) because they have no descriptive name, just a numerical one, which is not easy to remember.

Unless you have the kind of mind that remembers shapes, finding a particular phrase means auditioning them one by one. If you read music, though, the notation is a click away and you’ll find that far easier to remember. (A complete score containing all the phrases is available from sonokinetic.net, but at extra cost.) 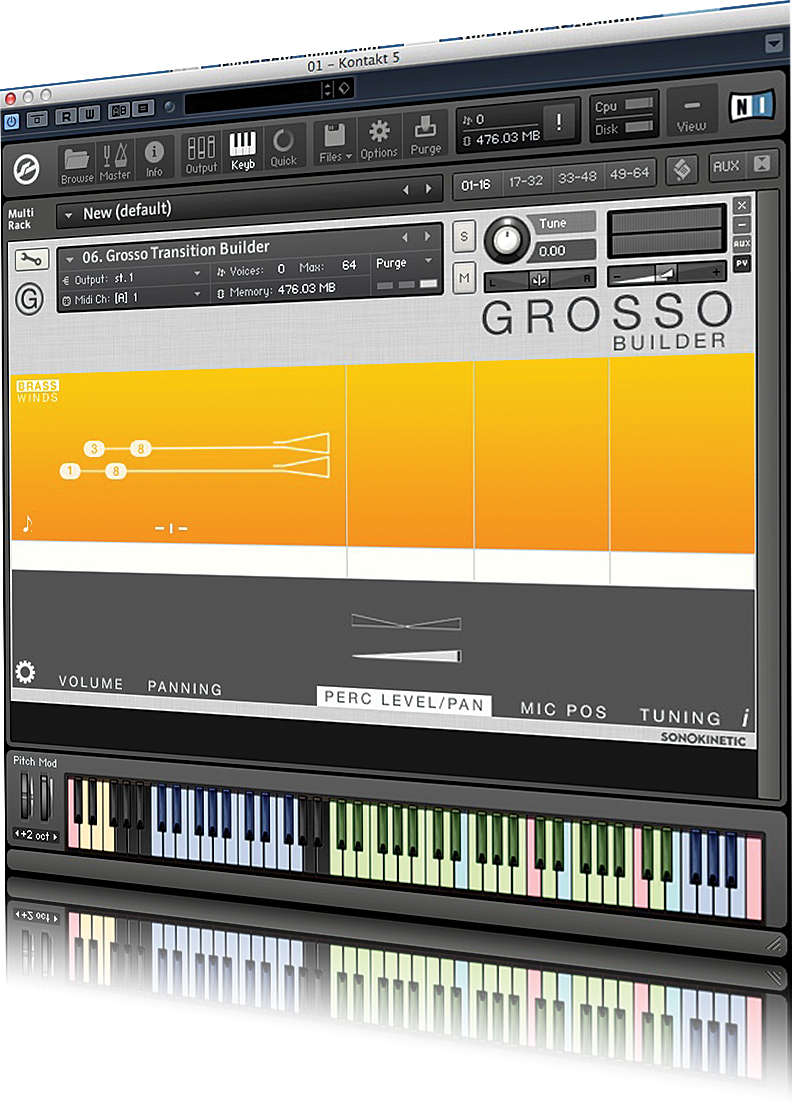 Musically the phrases are minimalistic, and most rely heavily on rhythmic shapes as opposed to melodic lines, which makes them ideal for accompanying action scenes and trailers. That said, they could just as easily be used in other genres.

Although recorded in 12/8 time the engine has been configured to work in both 4/4 and 12/8. Compositionally, they have been ingeniously constructed to fit together across the entire orchestra, and the orchestration by Piotr Musial is faultless. As a result, pulsating orchestral backdrops – anything from light strings and delicate woodwinds to a complete symphony orchestra at full blast – can be scored very quickly.

Harmonically Rich
Just when we began to tire of playing Grosso’s standard major and minor phrases we discovered the Harmonic Shift feature. Brought over from Minimal and expanded upon, it enables you to play phrases simultaneously in different but related keys. Triads are played, as usual, with the left hand while the right hand executes on-the-fly keyswitches that change the phrase or phrases being played by set intervals.

It’s a great feature and works brilliantly with two phrases playing simultaneously, one employing the harmonic shift and the other one left unaltered. Default major and minor interval settings have been defined by Sonokinetic but a matrix is provided for setting up user variations.

In the main GUI, which is both artistic to look at and functional, all the controls, including the main volume, panning, crossfade times and the different microphone positions, are easily adjusted. Volume for the fields within a preset is assigned to the mod wheel by default (CC 1) but is easily switched off.

Keyswitching plays a major role in Grosso. After all, there are plenty of spare keys available. The playing range is less than two octaves and playing individual notes is not practical. Muting phrases, selecting presets, controlling harmonic shift, tuning, turning release samples on and off and operating other controls is all done with keyswitches.

Also, because the instrument is split into separate Kontakt patches, the keyswitches have been laid out in such a way that when several patches are loaded together you can play them all on a single MIDI channel.

Four microphone positions are available: Close, Decca Tree, Wide and Far (balcony). Only two positions can be mixed at once, though, which might be a bit limiting for some people. The default position is just a single Decca Tree but you can mix in one of the other options if necessary. If the 16-bit Lite version is used, a premix from four recorded positions is used instead to save CPU.

The hall reverb produces an excellent ambience but it’s not adjustable. If necessary it can be tamed by using just the close microphone. A completely dry sound is, of course, out of the question and in this case not desirable anyway. 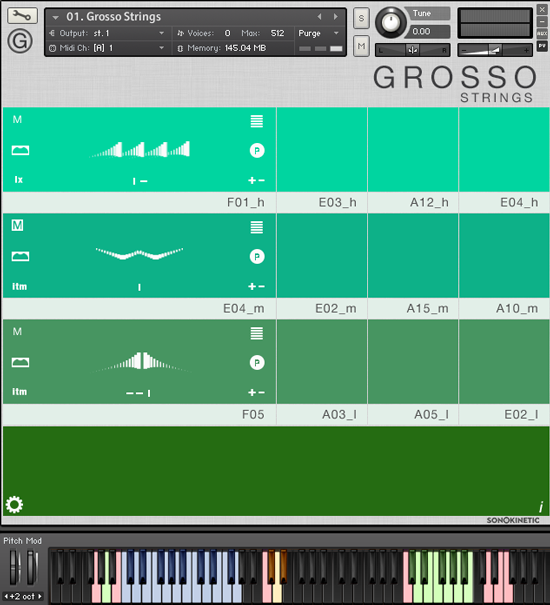 In Transit
A completely separate patch is used for the Transition Builder. It’s used to automatically build brass and woodwind crescendos based on various chords. Percussion fills and a taiko ensemble are also included.
Crescendos can be assigned to brass or woodwinds and, similar to the main Grosso instrument phrases, each one displays a graphical representation of the chord intervals that are building up throughout a crescendo.

The more complex the graphic, the more notes are added to the crescendo, mostly one at a time, fanfare fashion, and the speed at which they enter can be adjusted. Also, unlike the main instrument phrases, dominant sevenths, diminished, half diminished, augmented and suspended chords can all be played as well.

A large number of percussion fills, one-shots, rolls and short crescendos are mapped to the keyboard, as are the taiko and gran cassa samples which are laid out in octaves for two-handed playing. Mixable microphones are not available in the Transition Builder; instead, four positions are available plus a premixed tutti position similar to the one used in the Lite version.

To Buy or Not to Buy
Many musicians are opposed on principle to the phrase-based approach to composition. After all, the user isn’t really composing, just piecing together someone else’s musical ideas. If you’re in that camp, though, Grosso might just change your point of view.

The sheer depth and flexibility of the software is breathtaking, and with so many phrases available across the entire range of the orchestra, hundreds, if not thousands, of combinations are possible if you take the time to experiment.

With such a wealth of material at your fingertips, complete compositions can be achieved with Grosso alone. However, due to the lack of melodic material it’s probably at its best when combined with other libraries and synths.

Although instant results are obtainable, even to non-musicians, Grosso should not be dismissed as a one-finger (three fingers, in this case) beginner’s program. Experienced composers and musicians will find it useful, too, because the more musical knowledge you have the deeper you can go with features such as the Harmonic Shift and the Transition Builder. 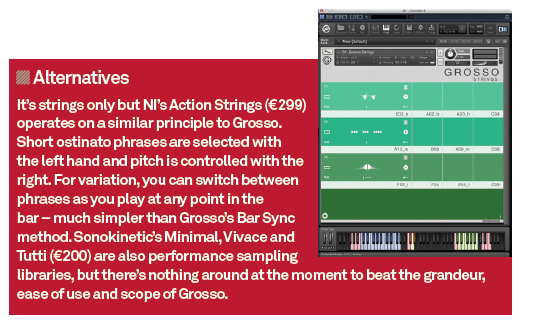 Everything in Grosso has been thoroughly thought through musically, and cleverly implemented for fast scoring. At its most basic it’s very easy to use but has the necessary musical depth to satisfy experienced composers. Mixing is basic but we found it easy enough to blend Grosso with other libraries, and if you need effects and so on you can always dive into Kontakt’s editor.

Last but certainly not least, we think that one of the best things about Grosso is its ability to inspire. It’s the kind of software that draws you in and before you know it hours have passed as you experiment with different section combinations, muting some, harmonically shifting others and so on. So if you’re stuck for ideas Grosso might be just what you’re looking for. 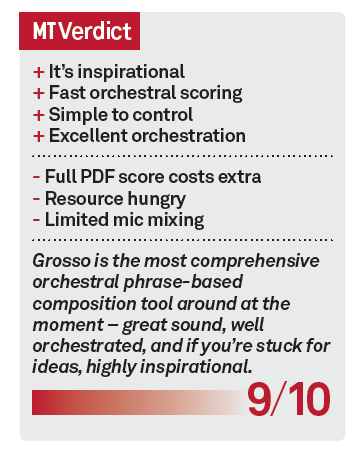