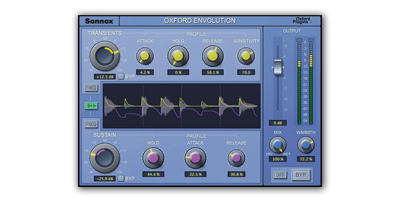 When it comes to transient shaping, Sonnox is pushing the envelope. Mike Hillier explores Oxford Envolution… 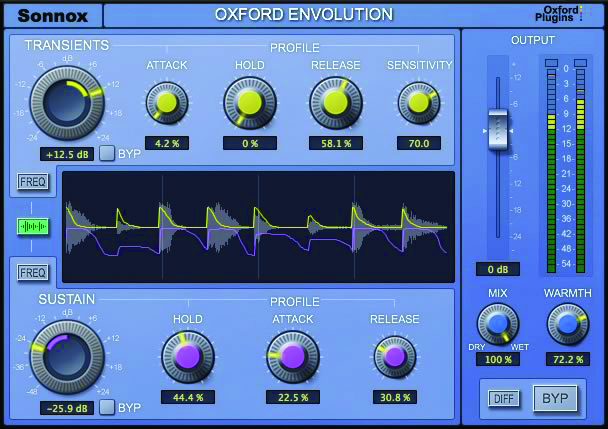 Transient shapers combine elements of compressors and expanders into a single tool for controlling the envelope of a signal. By splitting the signal into the ‘attack’ and ‘sustain’ portions, the user can then turn up or down each portion as they desire.

Transient shapers are most commonly used on drums and other percussive signals, to add either presence or distance to the signal, but they can also be used on many other instruments to either bring up or push back the transients or the room sound, just as you otherwise would with a compressor or expander.

The ‘attack’ portion, referred to here as ‘Transients’, has attack, hold, release and sensitivity controls in addition to the main gain knob, while the ‘Sustain’ portion has hold, attack and release controls alongside the main gain control.

Both Transient and Sustain portions can be made frequency conscious, by clicking one of the FREQ buttons, which opens up a basic one-band EQ, which can be switched from Focus (think standard parametric, with variable Q) to Tilt (which provides either a hi- or low-frequency shelving EQ, with 6 or 12dB/octave slopes).

The main output section has its own fader for gain staging, a mix knob, and a Warmth control which adds in additional harmonic saturation.
Additionally, there’s a DIFF button, which outputs only the changes in the signal, which can be useful for hearing what the processor is doing, or conceivably for creative sound design.

Punching Through
We often use a transient shaper on kick and snare duties, pulling a little sustain out of a kick drum to control the low end, or for shaping the snare to bring attention to the initial snap of the stick hitting the skin.

With Envolution, we were able to fine-tune those decisions. Rather than pulling the sustain out of the kick as a whole, we could fine-tune the Sustain portion to work on the low-end only, with the Focus EQ enabling us to pinpoint the fundamental frequency, leaving the harmonics to ring out without using up all the bottom end in the mix.

Using the Hold, Attack and Release controls, we could further control the gain reduction curve, dialling the boom of the kick sustain down just how we like it.

On snare, the Tilt EQ was a little more useful, letting us bring up the snap in the top end, without muddying the bottom end of the snare. Similarly, on the bottom end, we could pull out a little low-end muddiness, while leaving the sweet top-end of the tail alone. Finally, we ramped up the Warmth control, to give our kick and snare some extra harmonic content, and the end result was not dissimilar to tape emulation.

Although with so many tape emulators available now, this function is likely to get less play than the other, more immediate, parts of the plug-in.

The end result was a tighter, punchier drum sound which helped to clean up the imperfect room problems in the recording. Envolution needn’t
only be applied to individual kit pieces, though. It could work wonders on overheads or room mics, and really shines when used on loops, enabling you to dig in and craft the envelope of each of the elements in the loop to achieve the perfect sound for your mix.

Alternatives
The Elysia Nvelope (available as either software or hardware) has similar frequency-focusing tools to the Sonnox Oxford Envolution, although it doesn’t have the same level of control over the envelope, with no attack, hold or release parameters.

The SPL Transient Designer (also available as both software and hardware) has only attack and sustain gain controls, making it the least flexible, but also the easiest to use. Flux BitterSweet is another great simple option, and is available for free.

Natural Selection
In many ways, Envolution is a little like using a multi-band dynamics tool, but it was definitely much easier to get to grips with. All the additional parameters won’t be to everyone’s taste, though, and we’re not going to be giving up our other transient-shaping tools completely in favour of this one.

There are plenty of occasions where broad brush strokes with a simpler tool will give us all we need, but for those sounds where we need to dig in, Envolution will be ideal.

Overall, Oxford Envolution is a very useful tool. People after options will love the control, not only over the frequencies that are processed, but also the attack and release envelopes for both the Transient and Sustain portions of the signal. 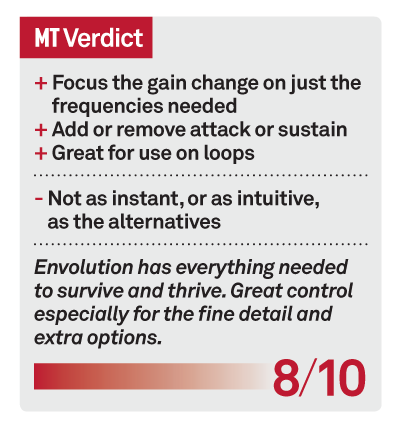