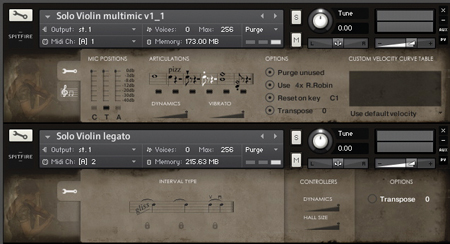 Hot on the heels of Albion – the impressive orchestral ensembles collection – Spitfire Audio has released another new samples library. Comprising solo violin, viola and cello, the aptly named Solo Strings was recorded at London’s Air Lyndhurst with top British session musicians. Few composers can afford Spitfire’s bespoke range of products, but Solo Strings belongs in the company’s commercial range, affordably priced and with an emphasis on ease of use. Available as a download from the Spitfire website, Solo Strings requires a full version of Kontakt 4 or 5 to run.

As the developers point out, their main objective with Solo Strings was to provide tools for sketching out soloist lines with the minimum of fuss. As successful film composers themselves, they knew exactly what was needed for the job and selected the most useful articulations. Each instrument comes in two formats: Legato and Multi Mic. As it’s probably the instrument that will be used the most, we started with the violin set, beautifully executed, by the way, by Andrew Haveron, leader of the BBC Symphony Orchestra.

Similar to Albion, the multi-mic samples have three microphone positions – close, tree and ambient – all of which can be mixed within Kontakt. Renowned for its great acoustics, the fabulous sound of Lyndhurst Hall was captured along with Andrew’s performance. Dynamics are handled by the mod wheel, which is also linked to a slider on the instrument panel along with another for controlling vibrato. Full left turns vibrato off; sliding it to the right turns it on again. It’s a bit clunky to use manually but much better using the assigned controllers.

For technical reasons, the legato patches come with a premixed balance and lack microphone controls. Nevertheless, it’s a beautifully reverberant string sound, perfect for scoring emotional violin solos over lush orchestrations. If the sound is too wet, a slider for adjusting the hall reverb tail is also provided.

Three types of legato interval are available here and each responds to a different velocity range. A light touch produces a glissando, a firm touch is needed for slurs, while playing harder generates smoothly connected but single bowed notes (you can lock and restrict these intervals to one type if preferred). Bring the mod wheel into play and you have a remarkably expressive virtual instrument.

For a more aggressive approach, though, there’s the Spitfire Ostinatum, a clever device for creating and performing repeated rhythmic patterns. Initially developed for Albion, it takes the strain out of playing them yourself. Lazy? Maybe, but very effective.

Session stalwarts Bruce White and Caroline Dale complete the trio on viola and cello respectively. These are set up in much the same way as the violin, with legato and multi-mic sets.
Neglected as a solo instrument and often the butt of musician’s jokes, the viola appears to have drawn the short straw here because, oddly, there are no pizzicatos. Having said that, a good sampled viola is rare indeed and this is one of the best we’ve heard.

Spitfire aimed to create a soloist sketching tool, and the company has achieved that and more. We think it has also filled a niche by providing three very expressive solo string instruments that provide instantly playable results at a reasonable price. We haven’t had so much fun playing a solo violin in ages – not since reviewing the now defunct Garritan Stradivari, in fact. MTM

WALK ON BY
Lacks viola pizzicato
No double bass