With its upgraded Beatmaker plug-in jam-packed with impressive new additions, has Ujam finally found its sweet spot atop the list of soft drum machines? 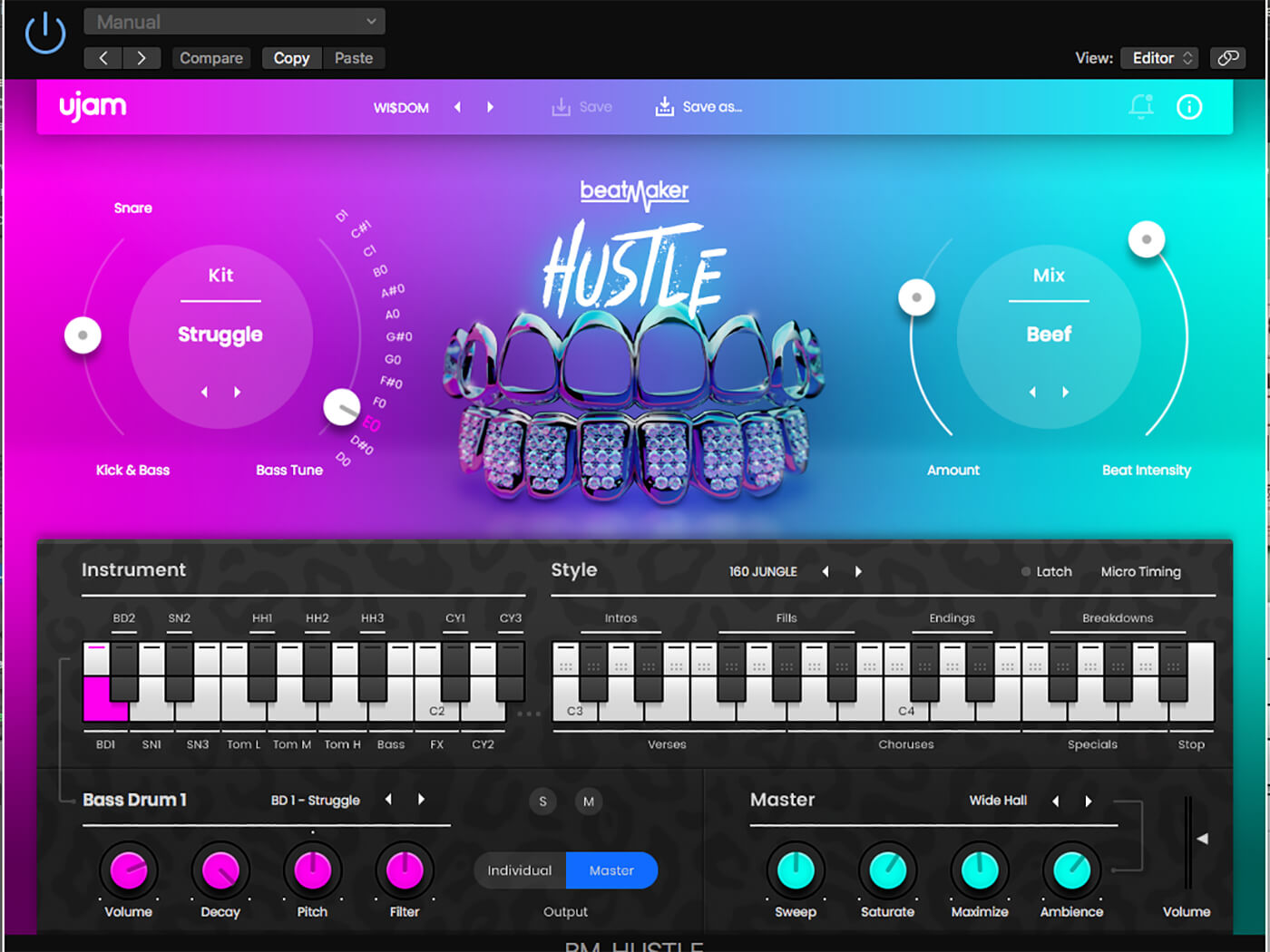 Founded in 2009 by music-technology pioneer Peter Gorges, hip-hop producer Pharrell Williams and film composer Hans Zimmer, Ujam’s range of instrument and effects products has seen the company go from strength to strength over the past decade.

Its outstanding user-friendly instrument plug-in collections include Bassist, Drummer, Guitarist and the new Finisher series. The first iteration of the cross-platform Beatmaker was designed to upgrade your productions with electronic beats and grooves of impeccable quality, and gave users the ability to create unique hits, patterns and grooves with real-time input from a MIDI controller. Optimised for live arrangement and mixing, Beatmaker plug-ins use Ujam’s macro controls to allow for dynamic and tonal tweaking on the fly. 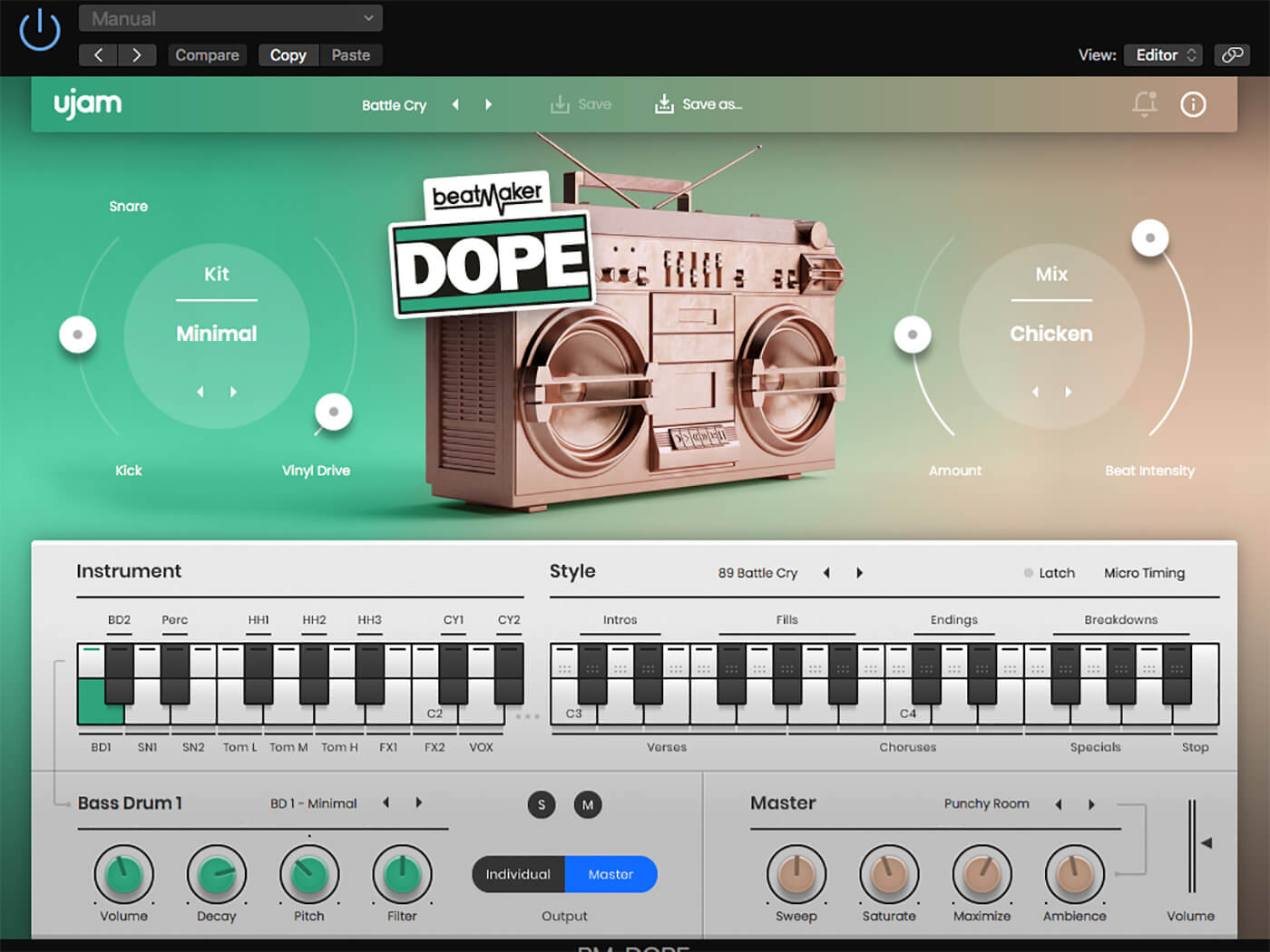 Install the 64bit-only VST, AU, and AAX formats, and the libraries of sound content that come with the players, which are packed into a .blog file named BM-<title>.blob. You can store the .blob file anywhere. After launching in Logic Pro and entering your Ujam login details, you’ll be making beats in no time. Once installed in Logic, I successfully loaded and tested within Garageband, Cubase, Ableton Live and Pro Tools. A word of warning though, if you’re upgrading from Beatmaker 1, make a backup in case you want to roll back. 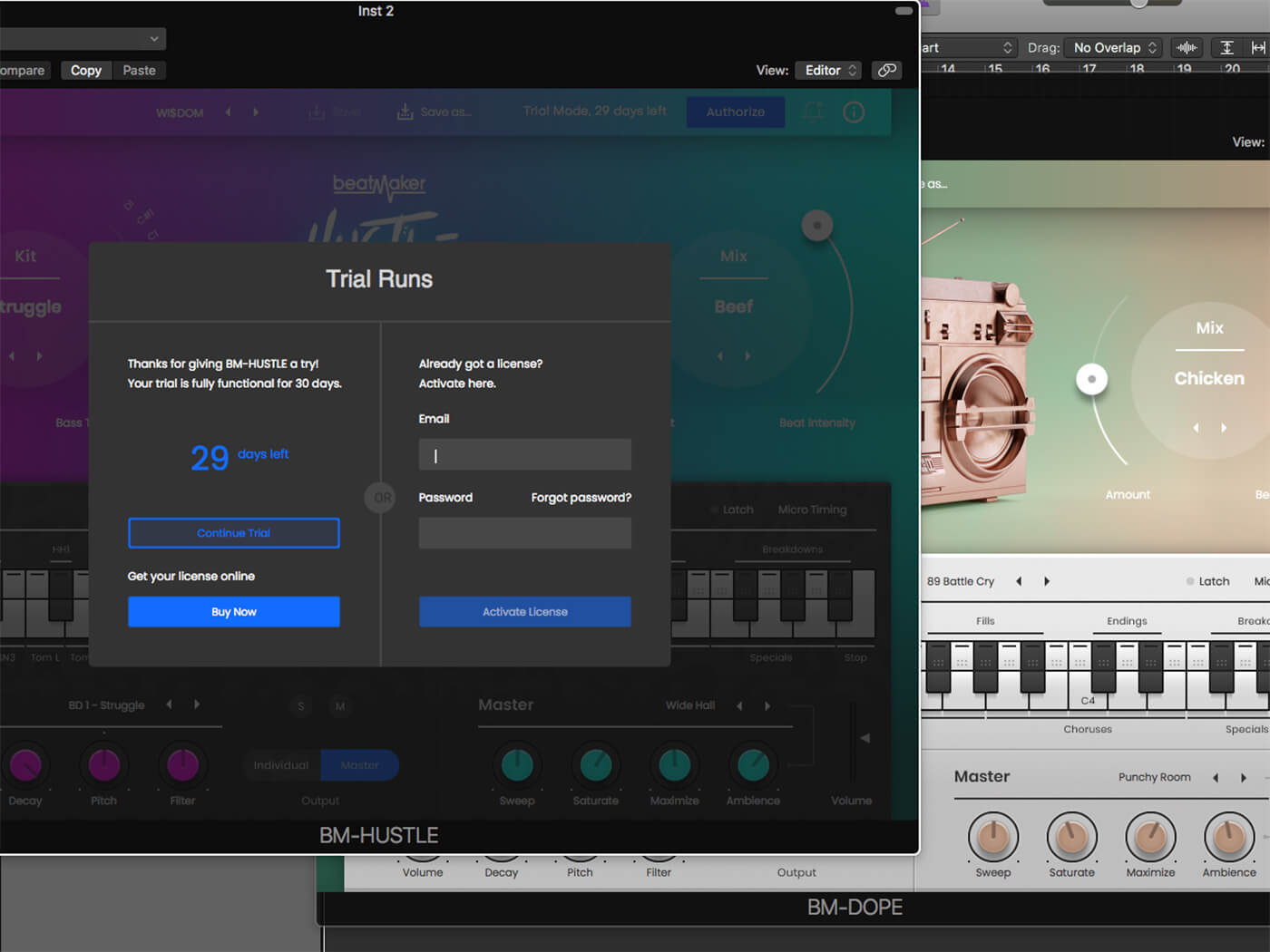 Aside from new libraries and functionalities, the instrument interface has been given some significant upgrades too. There is now a Phrase drag-and-drop section for dragging intros, verses or choruses straight from the UI keyboard into an instrument track. Doing this opens up further composition and editing features using the notation in the region. Multiple audio outputs are now available for routing each drum sound to an individual channel in your DAW, which gives you total control of the processing and mixing.

You can now build your own kits by loading in instrument sounds from others too. The Master section (mix preset and amount controls) – a holdover from Beatmaker 1 that controls a 12-bus mixing console with multiple audio processors per channel, as well as a mastering bus – has been updated, and now offers one-knob saturation, a loudness maximiser and an ambience selector.

If you haven’t used Beatmaker 1, it’s best to get acquainted with Ujam’s concept. Beatmaker has been developed for those who, in the words of the company, “find drum loops too limiting and programming MIDI drum arrangements too tedious or challenging”. It is designed to make producers’ lives easier, while retaining all the typical expressive options.

The new plug-in series covers a range of exciting sub-genres: Eden is tailored to EDM, big room and rave; Hustle is perfect for the gritty sounds of trap and grime; and Dope is aimed at hip-hop and boom-bap makers. It’s easy to lay down a drum track, with or without a MIDI controller. When it comes to the sheer enjoyment of playing and recording musical performances, as well as pitch bending and using modulation and sustain pedals for added real-time variation, a MIDI controller keyboard is the best option, but a standard step-input controller would also suffice.

Drum sounds now include groove patterns (phrases), which can be played or programmed in real-time by selecting song parts via your controller or mouse. The interactive keyboard’s mapping of samples in correspondence with a MIDI controller keyboard are well planned, but not GM standard, so adjustments would be required if you want to use the MIDI notation to play another drum-based instrument in your DAW. Keys in the left half of the keyboard, from C1 to D#2, trigger the individual drum sounds, and keys in the right half, from C3 to B4, play new phrases. The latch function helps with playback.

In the Kit Section’s browser (left of the main logo), you can also hear variations of the chosen preset kit and, with the instrument keys selected, change individual drum sounds and incorporate sounds from other kits.

This area is where you will find the hard-mapping of your keyboard’s pitch and modulation parameters, controlling the ‘Kick and Snare’ in the kit area. When using the pitch-bend wheel, you can gradually alter the volume of the kick drum and snare sounds to create crescendos and decrescendos

In the phrase section, white keys trigger the programmed phrase and black keys see intros and fills played once before falling back to the previous verse or chorus. The Endings samples can provide a final flourish. There’s essentially an entire song’s worth of drum arrangements available here.

The drag-and-drop function is straightforward, while the MIDI notation includes all the swing and velocity amounts of the phrase. You can make further notation edits and use them as a trigger for another instrument. Additionally, above the phrasing keys you’ll find back and forward buttons that change the grooves of the programmed phrases. Finally, the Micro Timing tab enables users to apply Swing in Eden, and Quantise in Dope and Hustle. 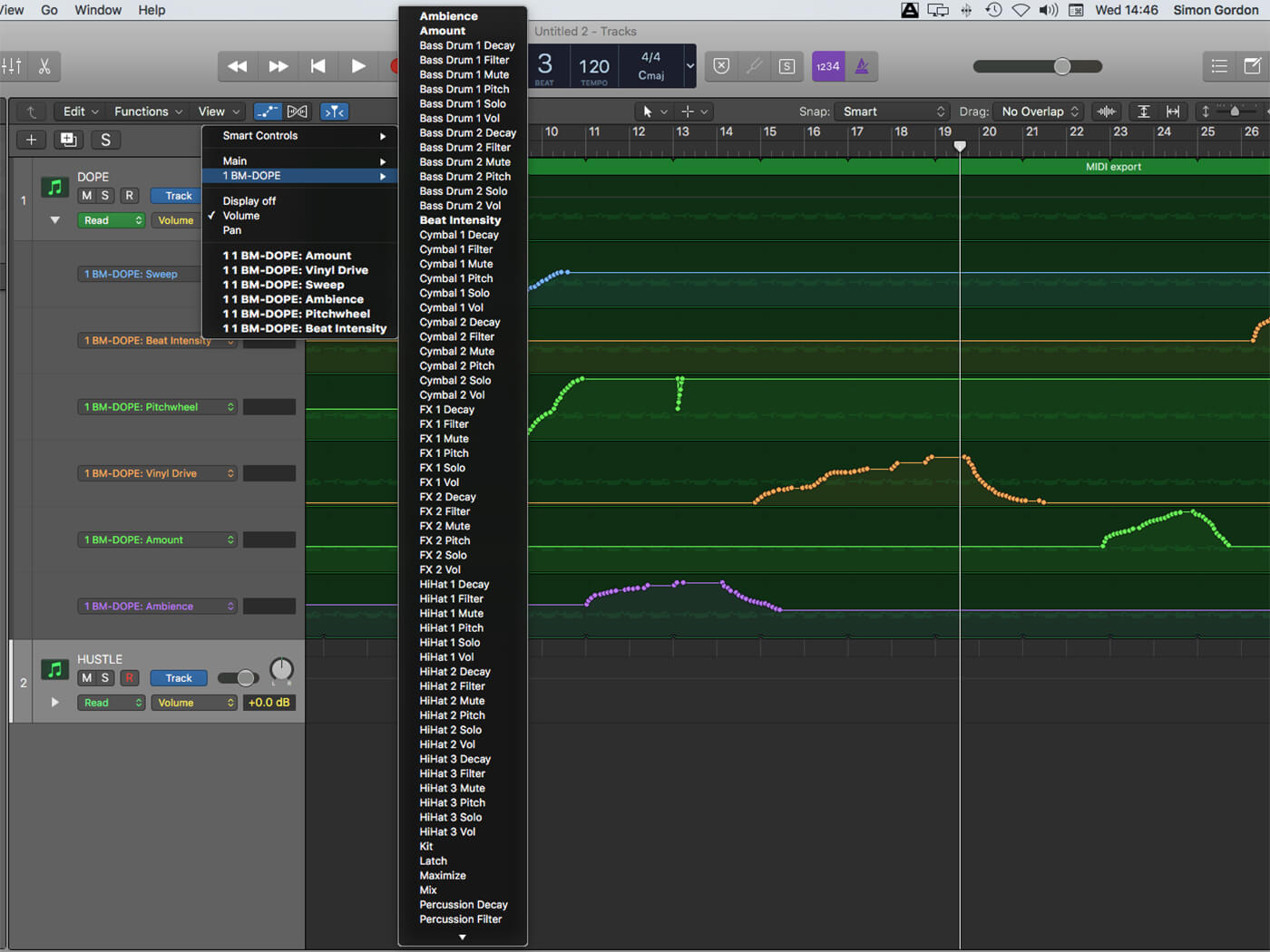 Beatmaker 2 is flush with new mixing features. Each drum sound can be manipulated through volume, decay, pitch and filter (only LPF/HPF) controls, found beneath the instrument section of the keyboard. The Master section is home to Sweep, Saturate, Maximise and Ambience controls.

In the Mix section (on the right, above the keyboard UI), you can select a hidden chain of effects that add modulation, reverb, bit-crushing and distortion effects to your sound output, each with variable application and intensity.

Each Beatmaker has a slider that controls a feature unique to its genre. For example, Dope’s is the Vinyl Drive, which adds a warm crackle to the sound, while Eden’s is Kick Pump, which sends the kick drum into a sidechain compressor that gives it a compressed edge typical of EDM and adjacent genres.

In Beatmaker 2, individual sounds can now be routed to external channel strips for extra processing opportunities, and we recommend using multiple output routing when loading these instruments.

With its intuitive design, Beatmaker 2 doesn’t disappoint. Each interface is sleek, vibrant and self-explanatory, leaving little reason to go digging through their manual in search of information. It’s more fun and more informative to simply get started. The expanded manipulation and mix features, which allow you to tailor the high-quality content to your liking, are a welcome addition.

The addition of multiple output options is a bonus. However, to be clear, this is a relatively primitive beat-making system and offers nothing of the advanced tools of Outpit’s Arcade or Xfer’s Nerve. But overall, this is an accessible and streamlined platform. 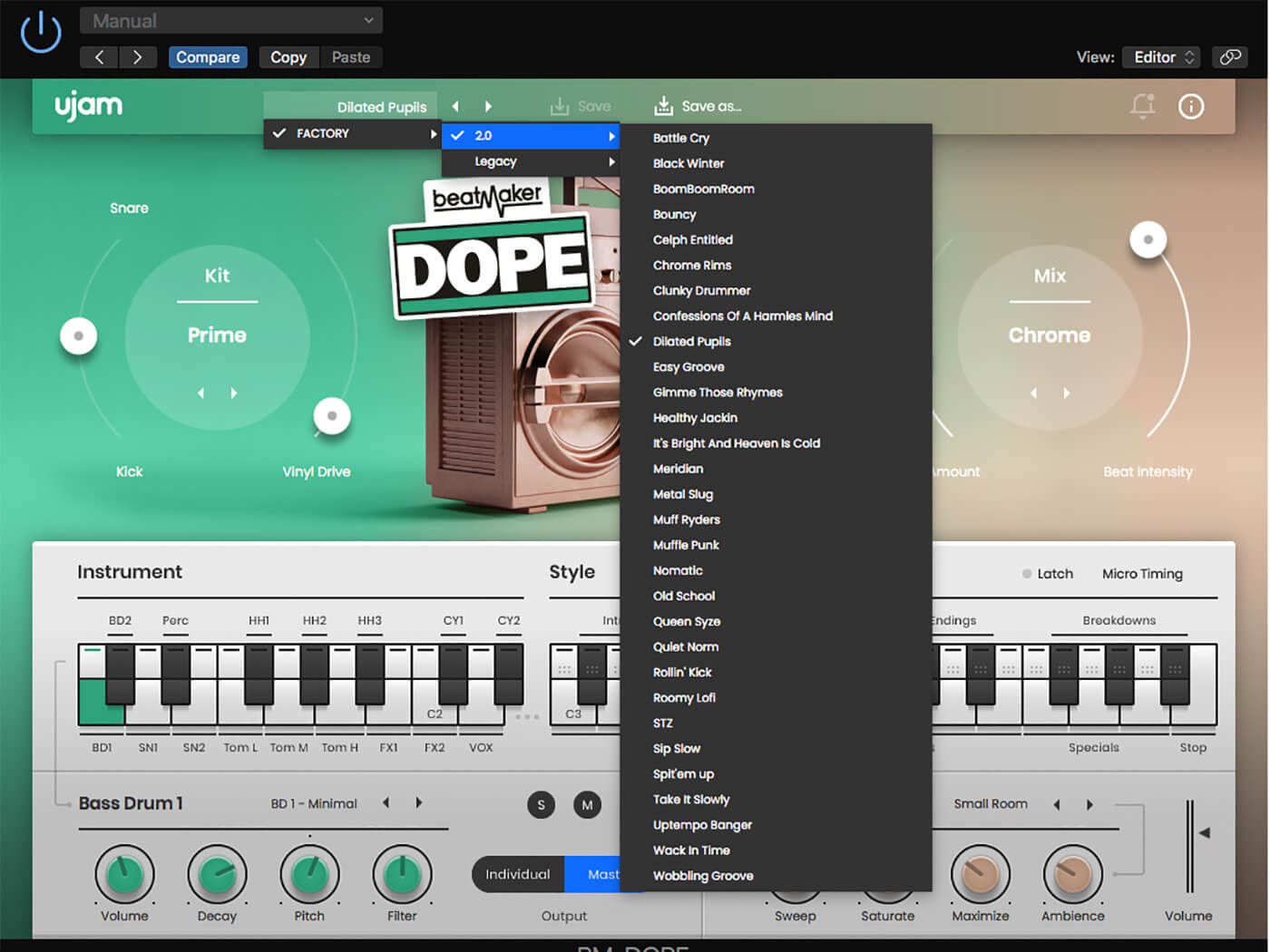 If you’re new to beat-making and have an interest in the genres that these Beatmaker 2 upgrades cater to, the answer is yes. The audio samples are of a high standard and it’s clear that these styles have been crafted by producers who know their stuff, and there are endless opportunities to be creative, thanks to the intuitive interfaces. But if you’re after a more advanced drum sampler for manipulation and processing, this isn’t the one for you. 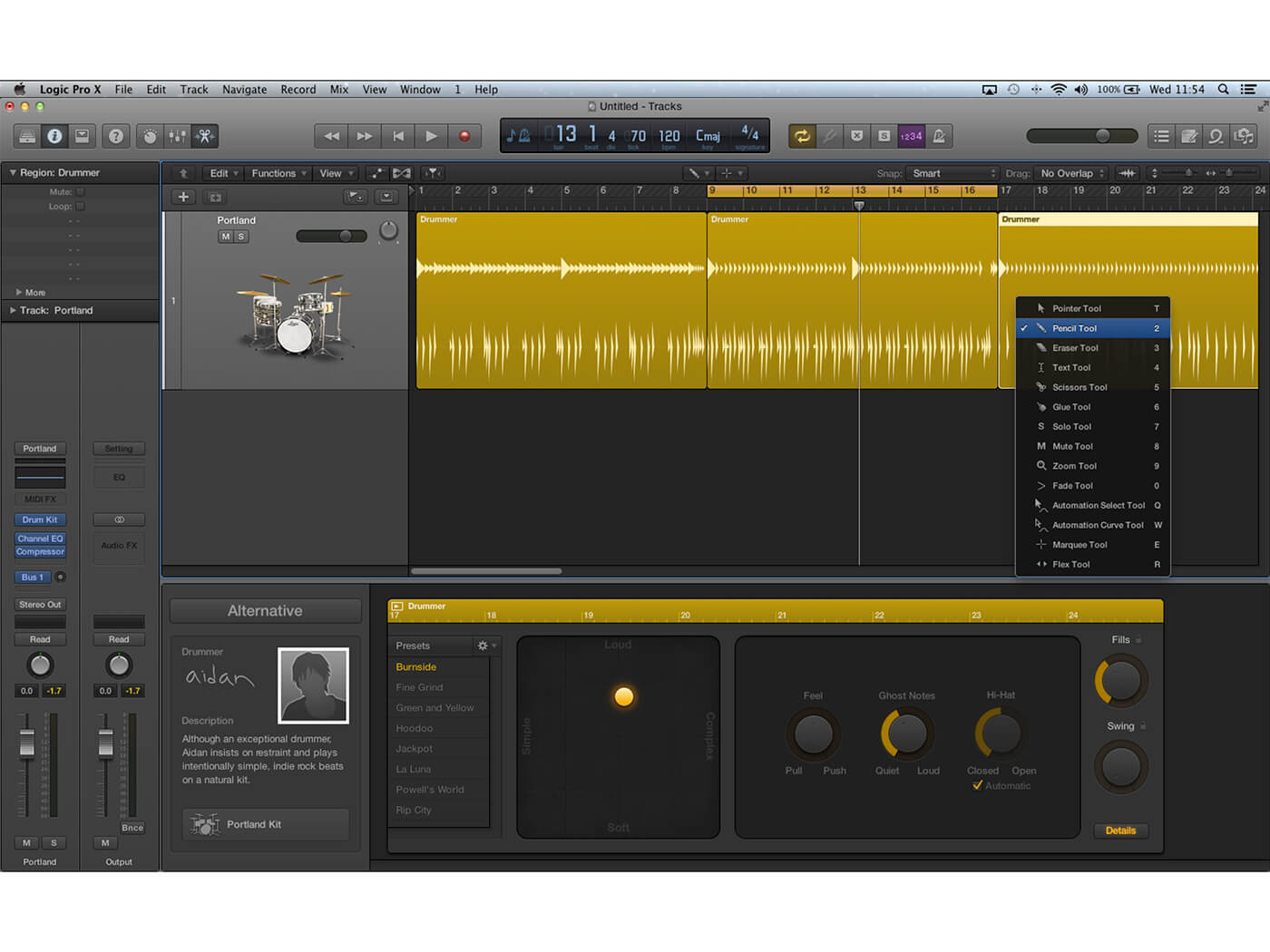 Logic’s Drummer was an absolute revelation for beginner producers. It’s a real time-saver, thanks to its allowing users to select the style, performance and intensity of their virtual drummer, and then build their track section by section. It’s a doddle and, for our money, the simplest way into the beat-building world. 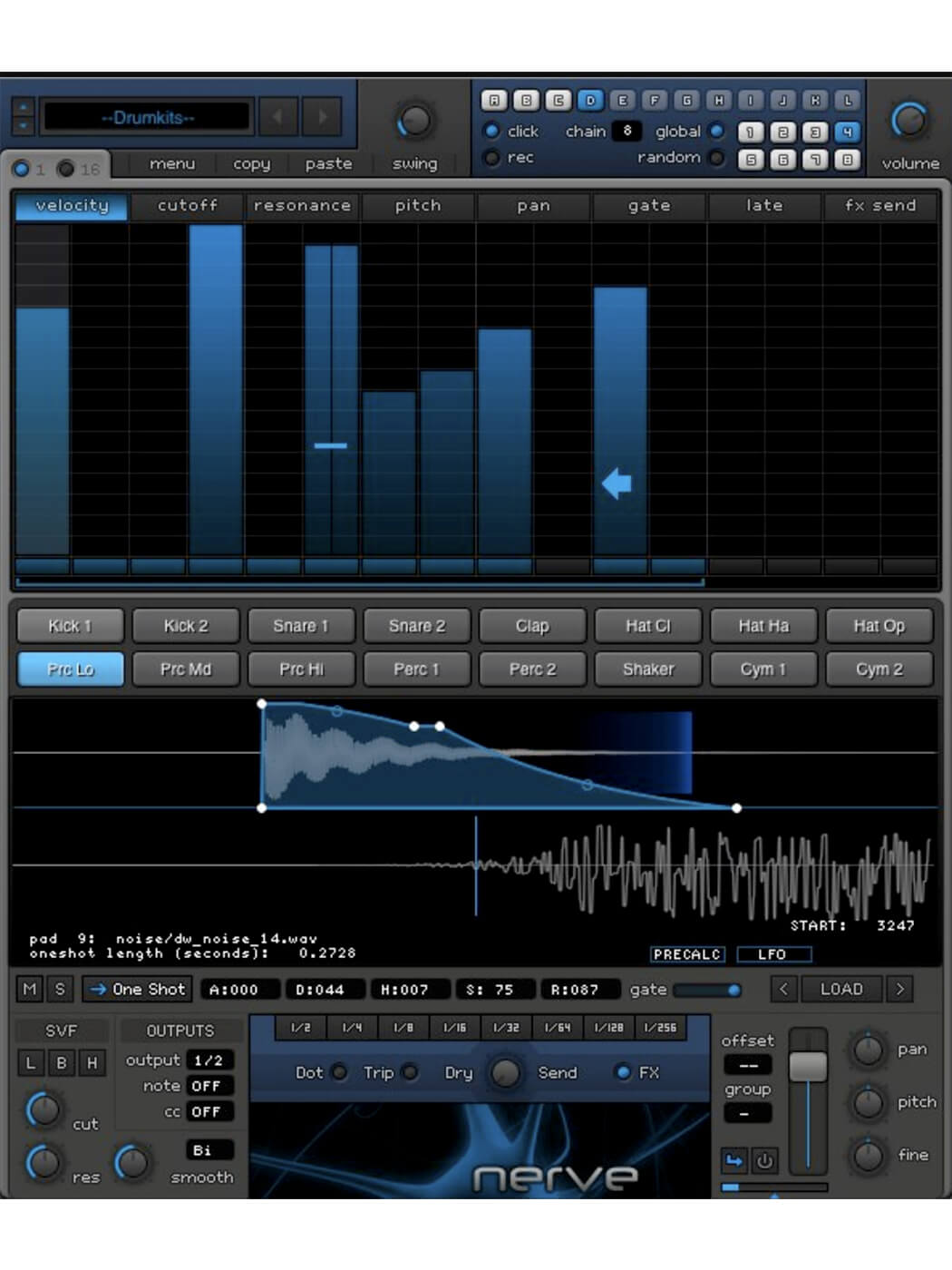 Though a decade old, Nerve is still an intuitive and complex drum processor. Rather than sticking to your simple loop sounds, Nerve prompts users to get their hands dirty and experiment with sound.