What do you get if you combine an award-winning engineer with a legendary studio? A whole lot of groove for your buck, as we find out with Toontrack’s latest drum expansion… 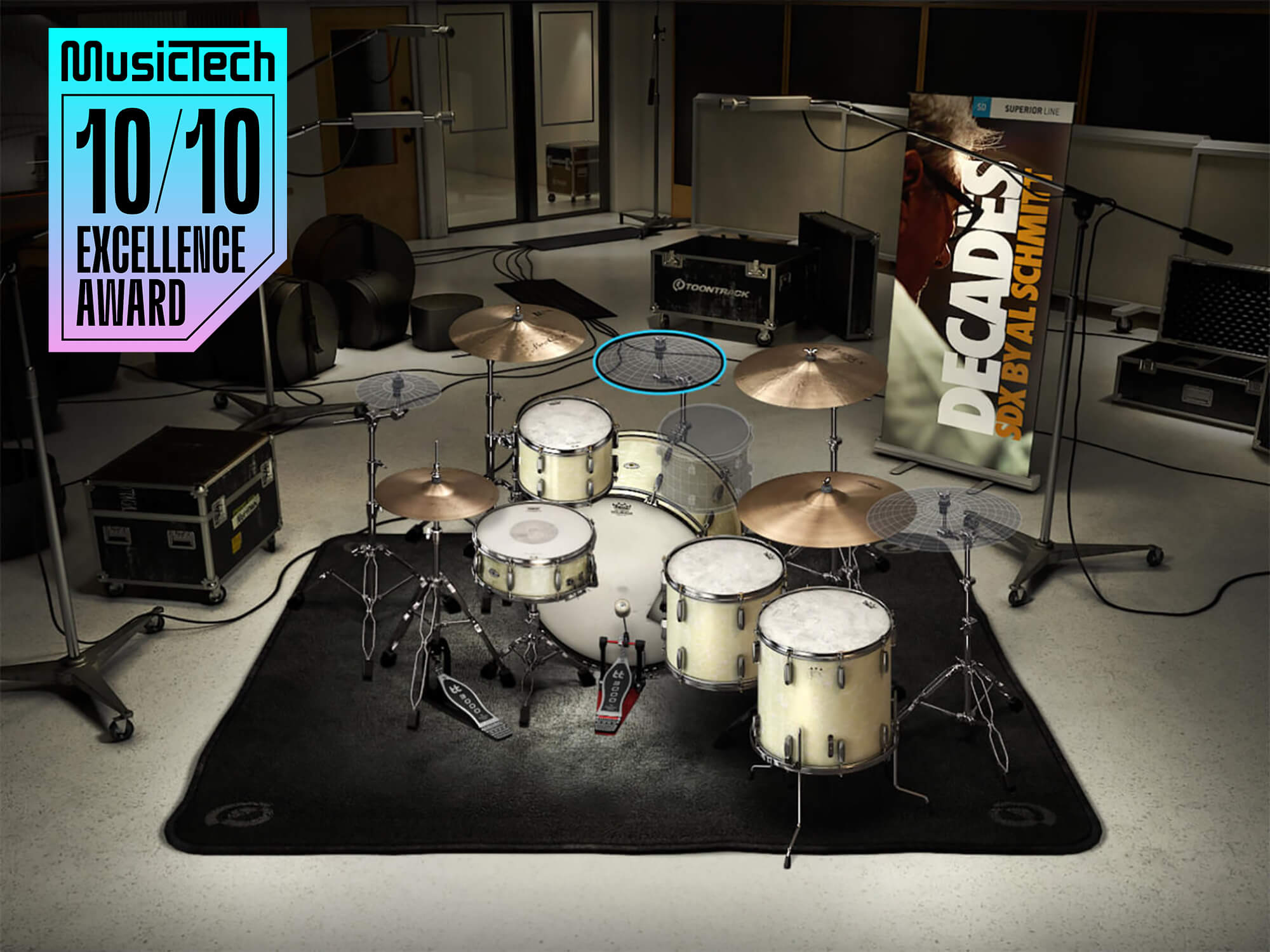 ⊖ There could be a little more rock content, but SD3 has plenty as standard

This is the most fantastic sounding expansion pack, fully exploiting the engineer, room, choice of kits and playing. It’s a Full-House!

Toontrack’s Superior Drummer package has arguably changed the way that many producers work, when it comes to utilising live drums. Billed as the bigger brother to the more modest EZ Drummer package, it offers access to a larger and more elaborate number of samples, while also allowing the exploitation of the EZ Drummer line, which caters for everything from Latin percussion to Junk kits, so any expansion library which further compliments the excellent in-house SD3 samples is going to be worth considering, especially when produced in conjunction with an industry legend.

Al Schmidt might not be a household name, but it’s absolutely guaranteed that you will have heard his work. His credits read like a who’s who of music from the last seventy years, beginning with Duke Ellington, who he worked with as a recording apprentice. From this initial spark, so followed Henry Mancini, Sam Cooke, George Benson, Steely Dan, Miles Davis, Quincy Jones, Frank Sinatra, Toto, Robbie Williams, and finally, Michael Jackson. 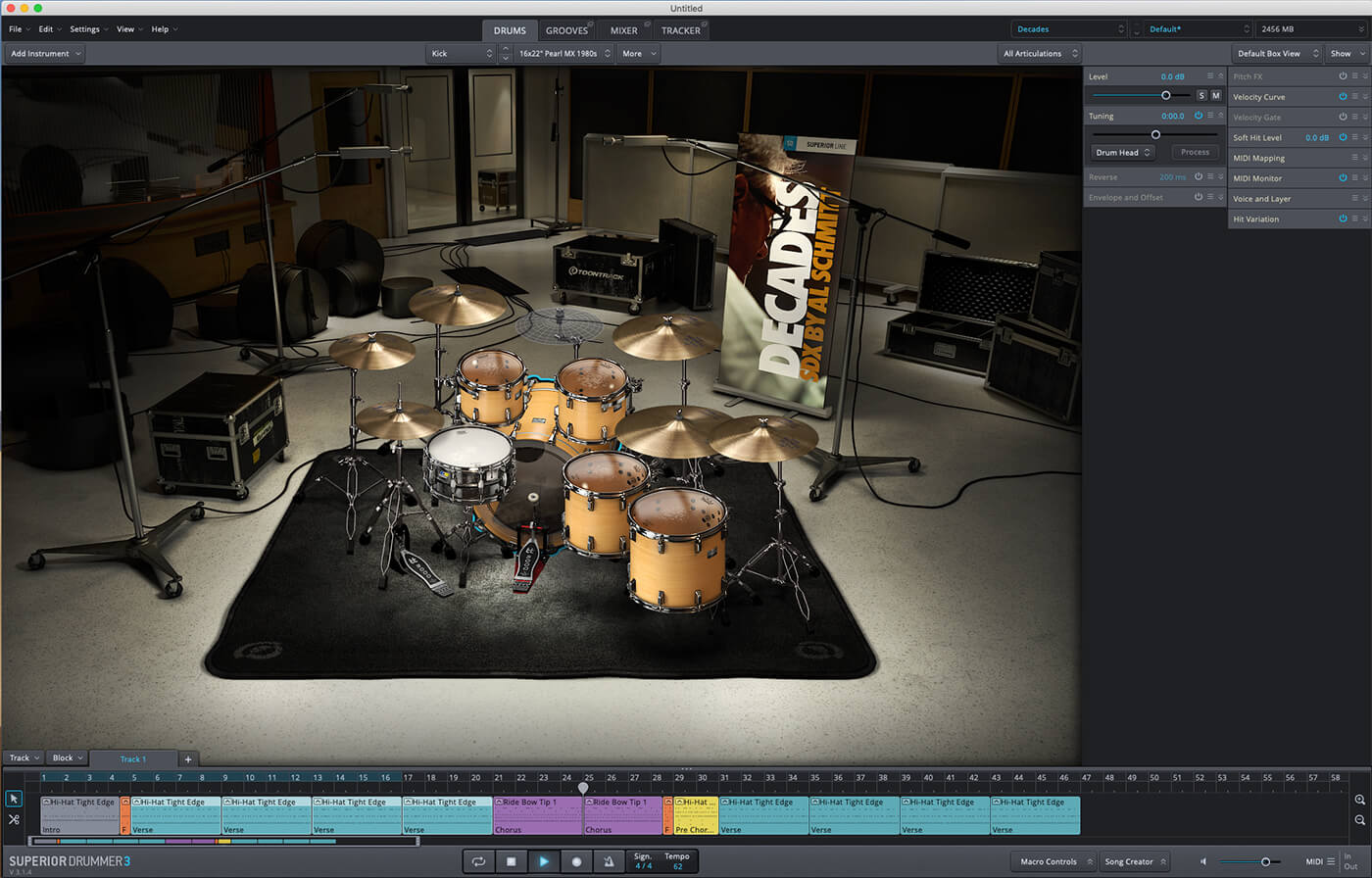 By any standard, that’s an impressive CV and one that accounts for twenty-three Grammys, but couple this with the equally legendary Capitol Studios in LA, alongside a host of super-fine drum kits, and you have something of a formidable collection, extending through the Decades – no surprise how Toontrack came up with the name.

Kits in the capital

Sampling for this collection has been undertaken in true Toontrack style, with a wealth of both drum and acoustic capture. Five kits have been used, but with variance within each, so you’ll actually have access to nine kicks and twelve snares, and while it’s entirely fair to say that there is enormous variety, it does feel more at the soul, RnB and jazz end of the spectrum. While this might discourage some, this would be tantamount to reading the proverbial book by its cover, as Decades feels entirely complimentary with the existing content found within Superior Drummer 3, acting as the host package for this expansion library; Decades falls into the higher category of what Toontrack describes as an SDX expansion, and is not designed for use with their entry-level EZ Drummer package. 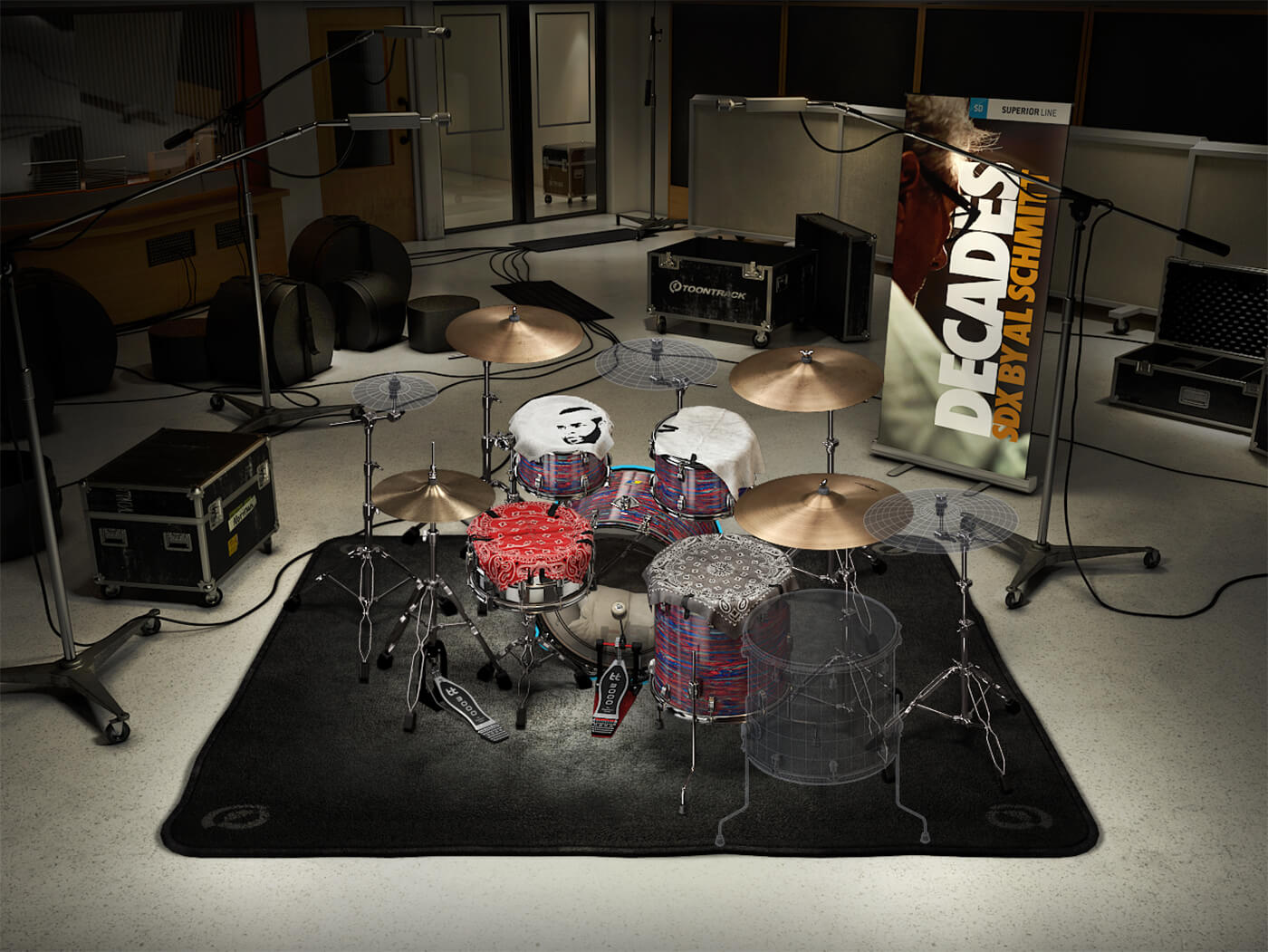 The first kit to get the sampling treatment is a classic 1930s Broadway Kit; oozing with vintage character, the colour extends back to the Swing era with reminiscence of Sinatra recordings. The huge 26” Leedy kick drum with calf skinhead is perfect for those big band pushes, and this is where the complimentary content of the library becomes relevant. Alongside the kick, the equally vintage Ludwig snare is perfect for those felted mallet and brush strokes. These will not be everyday requirements for modern production, but could easily spawn interesting colour for different production, or provide an exceptional palette for anyone who might regularly need those classic jazz styled sounds. It sounds exceptional when used in context with a brush groove, with the delicate feathering of the huge kick providing just enough vintage quotient, so that it doesn’t get in the way of any walking double bass.

As we move on through the years, the 1970s Pop & Soul kits, and 1980s Rock and Fusion kits, tighten up considerably in sonic makeup, not least of all as the drum technology progresses. As if the library wasn’t legendary enough, the snare found in the 80s kit is the very same snare used by drummer Jeff Porcaro. Apart from being the drummer with American band Toto, Porcaro was a renowned session drummer, playing with numerous other artists, having become synonymous with the drum groove found on the opening of the Toto track Rosanna, which went on to become known as the Porcaro Shuffle. The snare, being the very same drum, sounds unsurprisingly familiar, while the rest of the kit around it sounds equally tight.

Even though the kits are somewhat recommended in makeup, there is great pleasure to be had in exploring the different individual drums within each construct, such is the flexibility of the package. Accessing the mixer page of SD3 allows for great amounts of experimentation; on the most basic level, this can mean simply balancing the room capture fader, which sounds suitably reverberant, while adding in some of the SD3 compression and effects can yield sonic gold. I have always liked the Bleed feature in SD3, where it’s possible to apply or eliminate the amount of spill from other drums, if you want to tighten up your sonic form.

There are also options for felt mallet and brush articulations, allowing for further mix and match, depending on what you require, but unsurprisingly, the more modern the kits get in makeup, the tighter they sound, like a trip through the annals of pop music history.

It’s worth pointing out at this stage that while the sounds themselves are exemplary, they are only part of the SDX puzzle, as we have to bestow special praise on the comprehensive MIDI and groove files that accompany the package. Drummer Norman Garschke is firmly at the helm here, with considerable experience ranging from Big Band playing to the modern era. In interviews he clearly revels in his love of the classics, just about all of whom Al Schmidt has recorded, so it’s little wonder that he is such a great choice for the task of supplying groove. 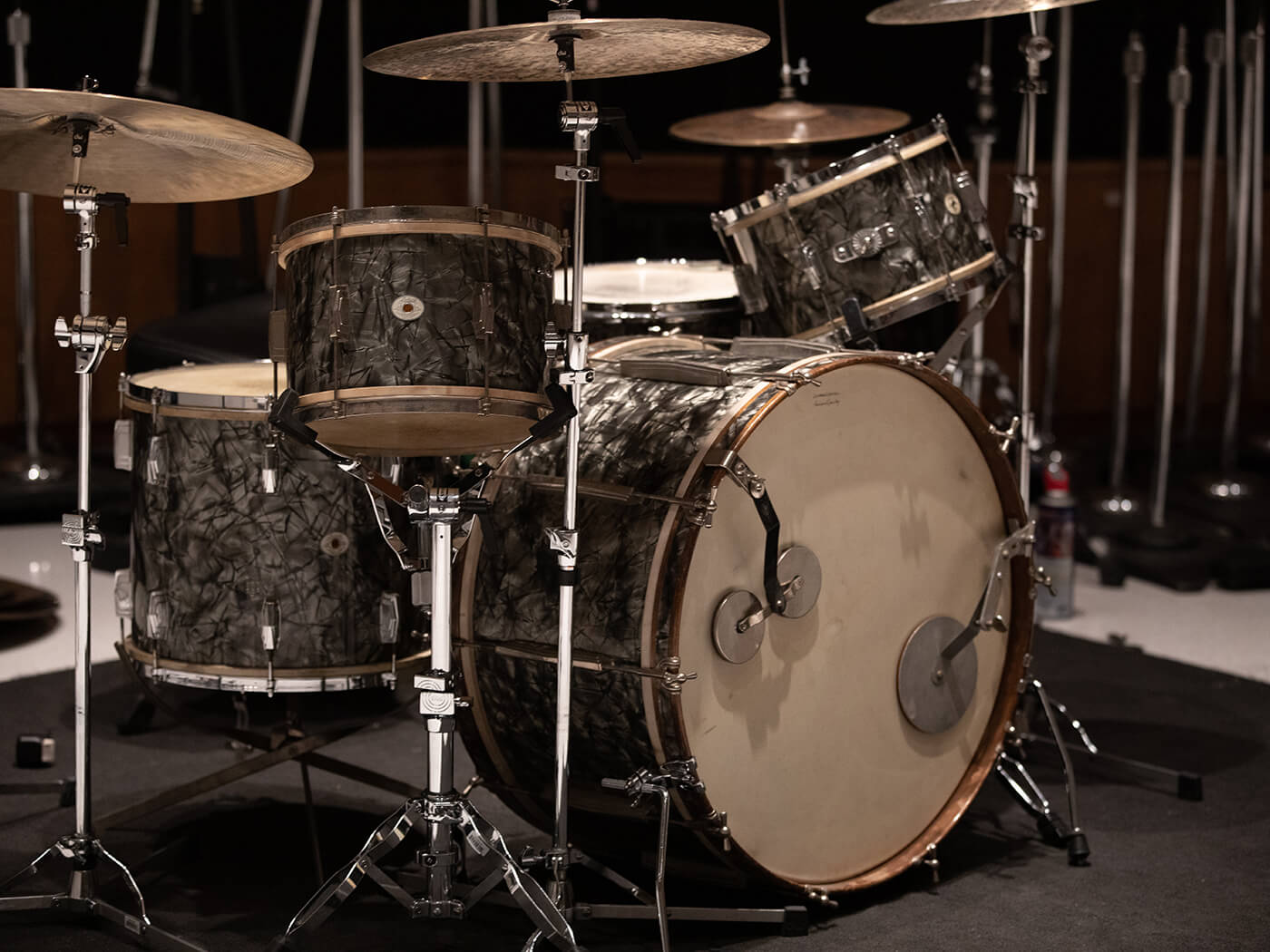 Toontrack has offered clues to accompany the different styles of kit; a good example being the SteelAJA grooves, which are clearly styled on classic Steely Dan content. Many Dan recordings used Bernard ‘The Hitmaker’ Purdie on drum duties, with his own legendary Purdie Shuffle being the backbone for tracks such as Babylon Sister. While Purdie’s playing was always astonishing, there is a sense that Toontrack and Garschke have tightened things up a tad, which will be very welcome when trying to employ in a commercial track. It’s a tricky balance between quantise and feel, which has been pulled off brilliantly. The playing is nuanced and effective, and as groovy as hell.

The Grammy goes to…

It’s hardly surprising then, that if you ask a legendary engineer to record legendary kits in a legendary studio, you are going to get something very special, and barring some unforeseen circumstance, it’s going to be of a high calibre. Well, it’s beyond special. Decades is an outstanding package that will compliment the SD3 default content to its fullest extent and is flexible in use, whether via DAW or in standalone mode. It offers the control that we all crave, while sounding excellent straight out of the box. If you want more rock and pop sounds for SD3, this will be very worthy, but add in the content from the jazz and soul end of the spectrum, and you have a very comprehensive compendium of superior drums.

The very fact that you might be considering this library means that you will have Superior Drummer 3, or you will be considering it as a purchase alongside this expansion pack. The complexity of what Toontrack has achieved with SD3 is not to be understated, and while the initial SD3 pack doesn’t cover all bases, it is excellent and sounds superb. What Decades does flawlessly is fill in several holes in the sonic palette, and add a large number of grooves to an already brimming library. Used sensibly, you can makeup a track that sounds exactly like a real drummer, but in a room that many of us can only dream of using, with an engineer who one might expect to be choosy about who he works with. It is a formidable expansion package at a price point which makes it the most outrageous bargain. 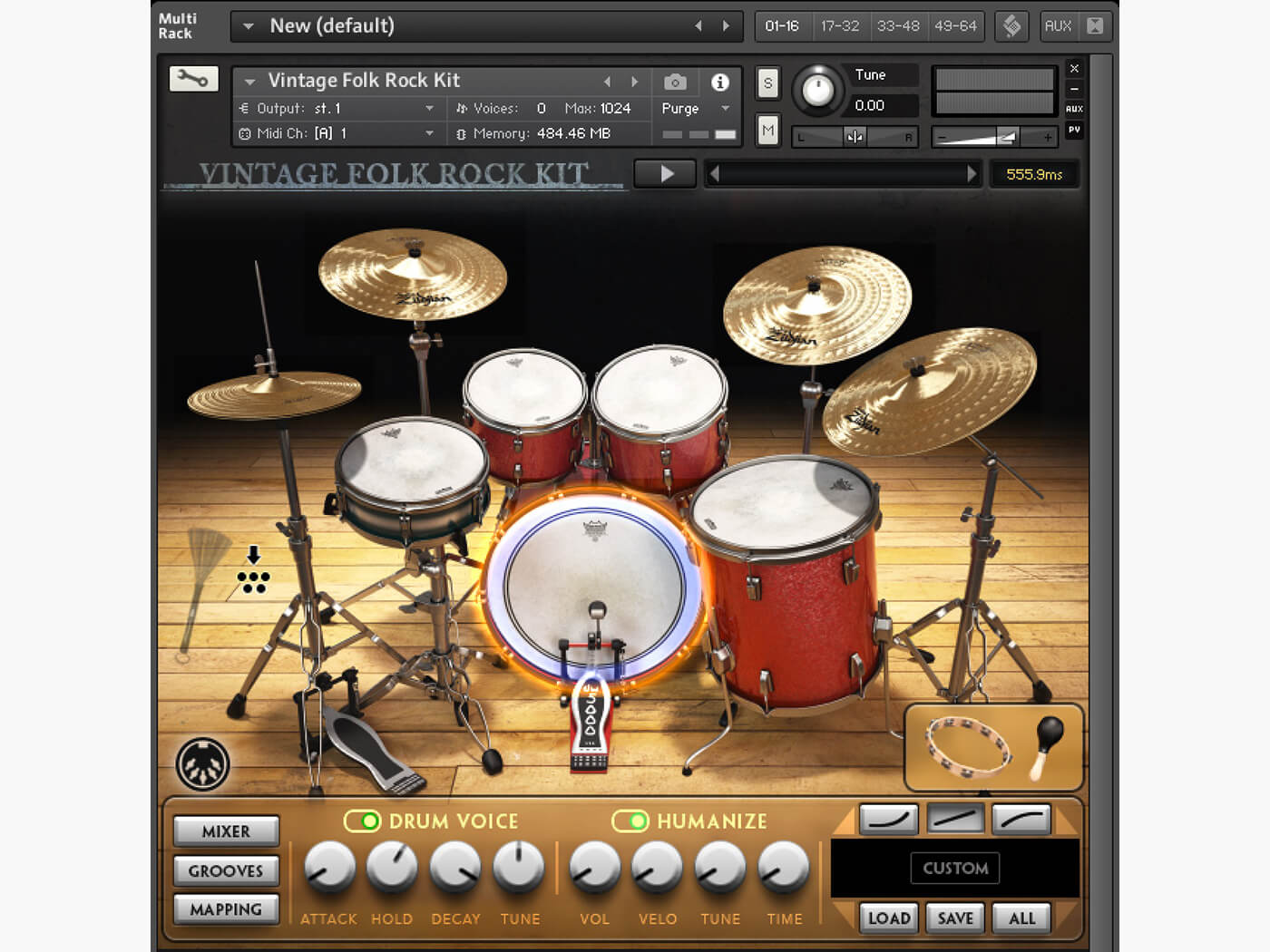 The Kontakt 5 series from Drum Drops brings a host of classic and vintage kits to the Kontakt format, offering a very thorough choice of drum sample, depending on your production persuasion. Choose from vintage classics, with musical styles in mind. 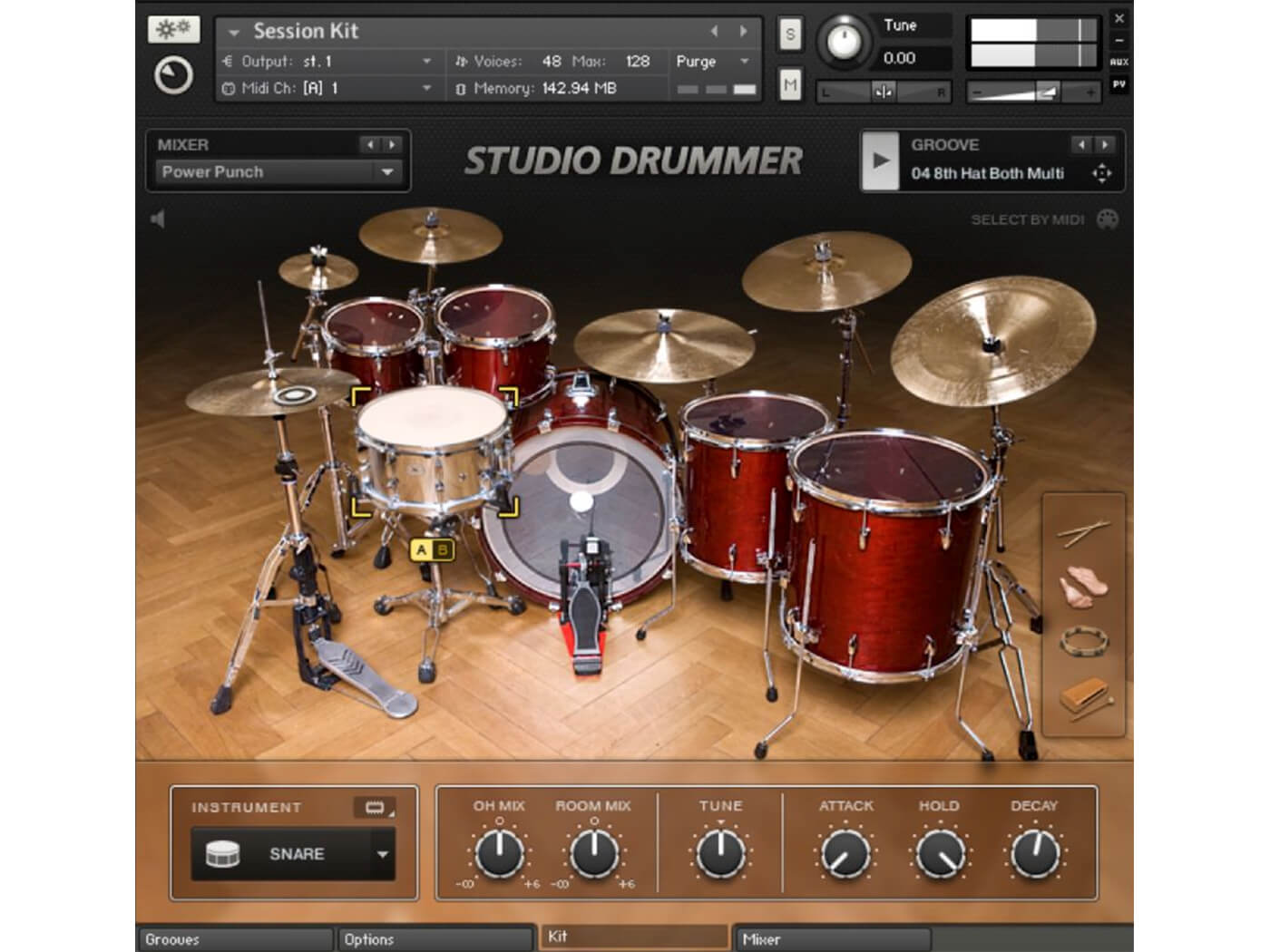 This Kontakt Player-friendly library offers similar sensibilities to Superior Drummer, making it ideal for use within the DAW. Sample capture is tight and assured, with modern tendencies, over and above the vintage stylings found elsewhere. Easy to use and full of groove!