Piloted once again by Iceland’s Ólafur Arnalds, the high-flying Spitfire has reached the stratosphere with its latest collaborative library. We strap in and see where it takes us. 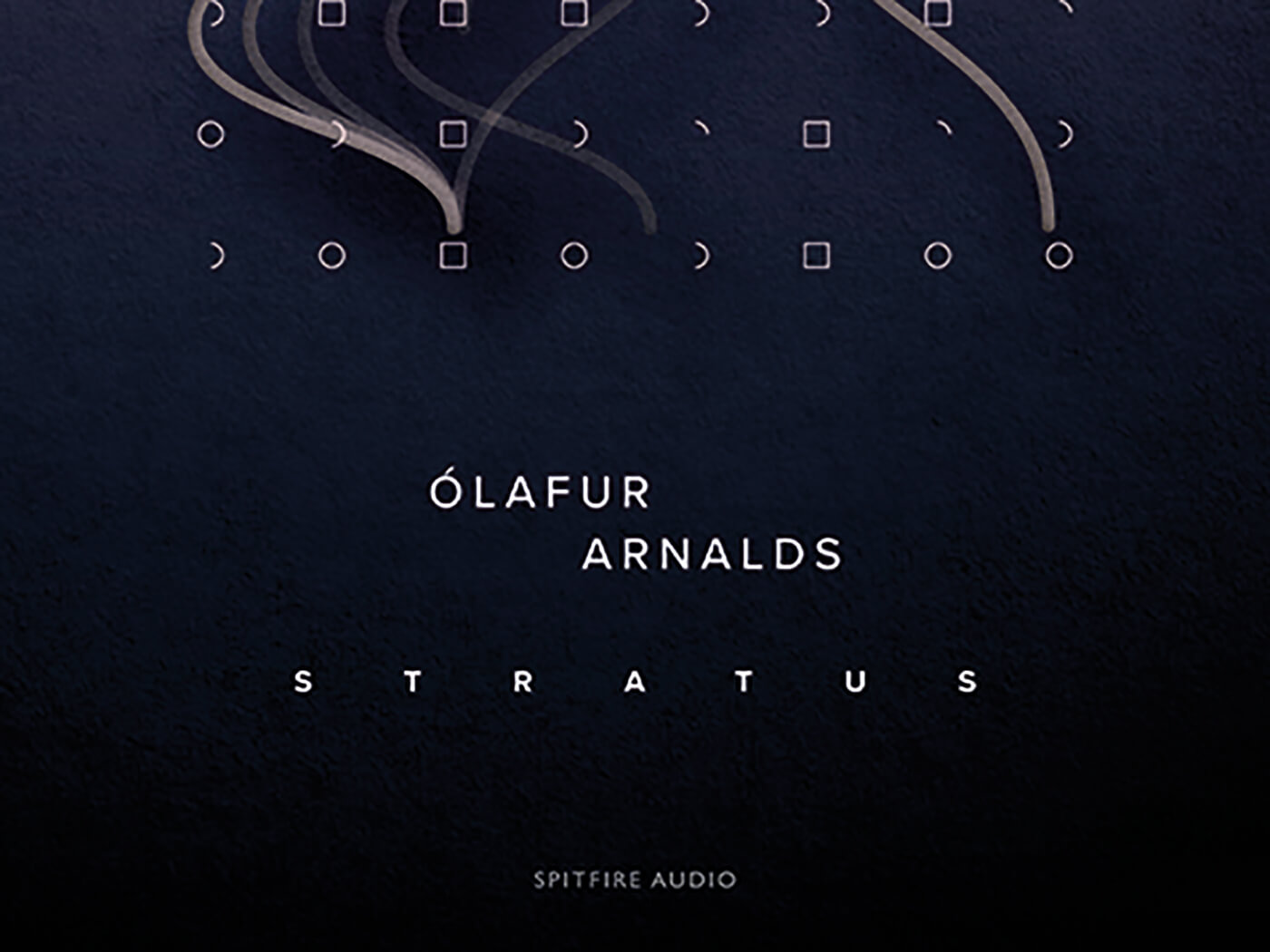 Stratus is London-based Spitfire Audio’s fourth collaboration with the Icelandic multi-instrumentalist and BAFTA-winning composer Ólafur Arnalds. Their partnership has so far yielded three fantastic libraries, of which the strongest is probably Composer Toolkit, which among other textures features warm and intimate muted piano sounds. Native Instruments’ Noire and Una Corda libraries have boosted the popularity of similarly equipped piano packages but there’s no doubt that Composer Toolkit remains the first choice for many.

The other two Spitfire releases to bear Arnalds’ name are Evolutions and Chamber Evolutions, which offer string textures based on undulating movement. Stratus builds on these successful titles by combining the felted piano of Composer Toolkit with the movement of the Evolutions libraries. But the comparisons end there – Stratus is very much its own instrument. 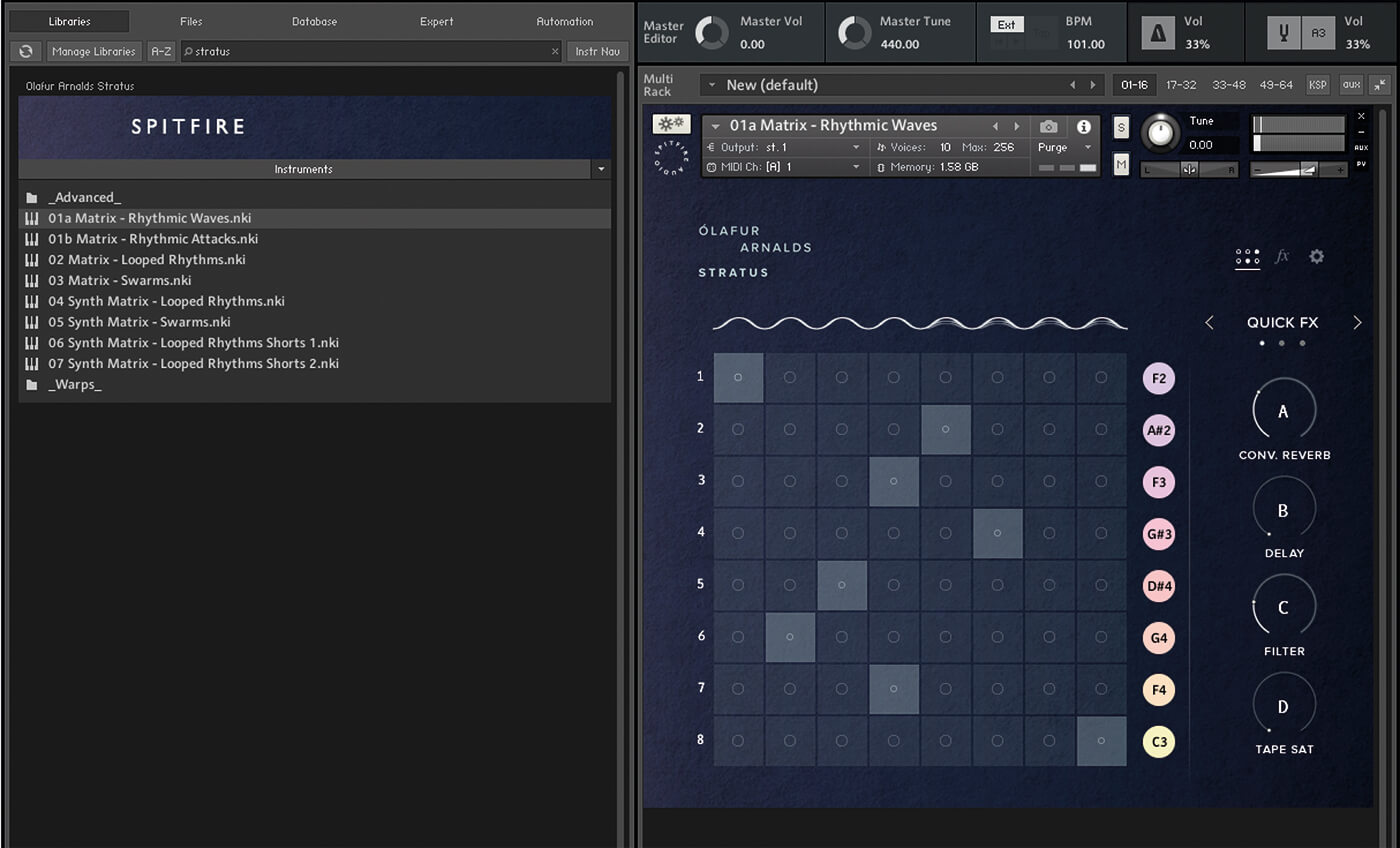 Stratus is hosted by Kontakt, and can run in either the full version or the free Kontakt Player. You’ll need 15.2GB of hard-drive space to get yourself up and running, and installation and authorisation require a simple two-step dance between the Spitfire Audio application and NI’s Native Access. Thereafter, it’s worth exploring Stratus’s capabilities in the order of its listed patches, which, at first glance, appear to run to seven – though there’s more here than initially meets the eye.

Explore in order and the first patch you’ll load is Rhythmic Waves, which goes a long way towards explaining Stratus’s place in the world. Play a single note and you’ll hear a piano sequence, triggered from the square in the top row of Stratus’s matrix. To hear a different sequence, click another square in this row; more rhythmic complexity will be added as you move to the right. Hold down a chord, however, and you’ll hear a series of polyrhythmic performances, as each note you play triggers its own pattern from positions in grid lanes two to eight.

The notes you’re playing are named to the right of the matrix, so you can see which notes of a chord are allocated to which lane. While Stratus assigns different Rhythmic Waves to each note by default, if you prefer life free of polyrhythms you can limit these to a single vertical column, so that all notes automatically trigger the same pattern. To do this, click the waveform shape above each row. But what exactly are you triggering here? 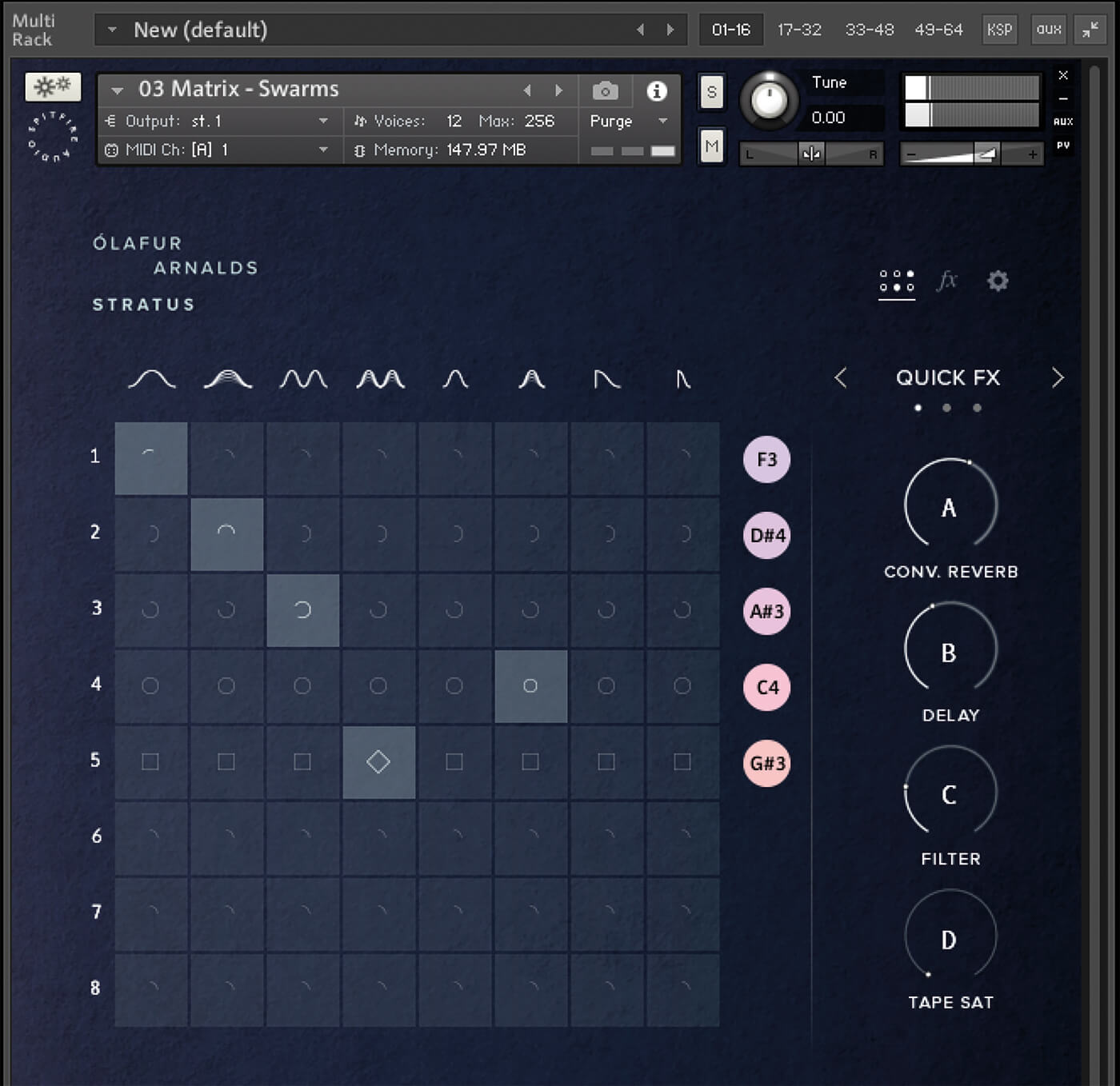 The answer is two separate pianos that have been recorded simultaneously, and are presented very widely across the stereo field. There’s a story to this clever feature. After suffering damage to his hand, Arnalds chanced across two pianos whose keys were being triggered from a sequencer. With his playing limited by his injury, he saw potential here for a new approach to the instrument. Now, via a brand-new interface developed for Stratus by Spitfire, the same techniques are available to you. The pattern triggering here seems sensationally simple but behind the scenes there’s a lot happening.

With some patches, you can click on individual cells to switch to sequence variations, allowing for more complexity. In-built effects are accessed above and to the right of the matrix, while shortcuts to a few prized effects parameters are available underneath. Dig deep into the effects page and you’ll find rotaries for a high-pass filter, tape saturation amount, chorus, convolution reverb, and delay. There are four effects bays (labelled A to D) and you can assign effects into any of the bays in any order you like.

There are two folders of convolution-reverb impulse responses, one made specifically for Stratus and the other borrowed from Spitfire’s EDNA Earth library. Below the effects tab, you’ll find the Quick FX, Controls and Randomise options, and the Controls page lets you set attack and release times for the currently loaded patch. You can add a piano overlay via the piano patches too, which introduces a third piano that sits centrally between Stratus’s twin wide piano engines.

The overlay functions like a regular piano, letting you play a front-end to accompany Stratus’s polyrhythms. There is a volume control for the piano overlay but there isn’t one to control the Stratus engine’s pianos when it’s engaged, which is a shame.

If you’re struggling for inspiration, not feeling the patterns or just want to be surprised, use the Randomise page to let fate decide which patterns will trigger. That’s not all it can do, though. You can also randomise the matrix based on time (in seconds) or based on a specific number of beats within your tempo-locked track, meaning you could, for example, use it to trigger a new range of randomly selected patterns every bar. 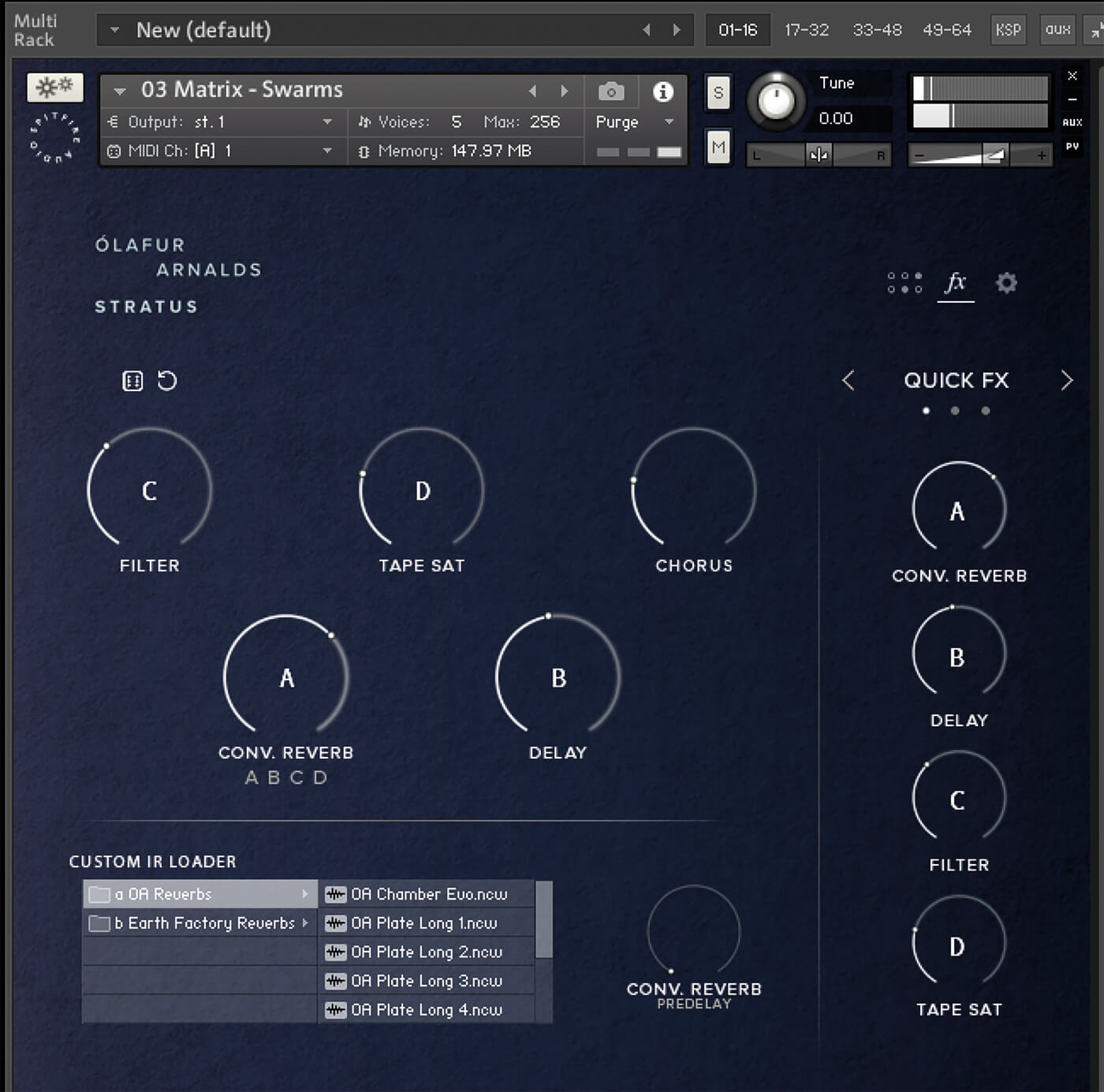 So far, so piano. But Stratus does more than merely tinkle the ivories – and this is where fans of Arnalds’ work as one-half of minimal-techno duo Kiasmos might sit up a little straighter. Alongside its piano-based matrices, you’ll find some for synths, namely Looped Rhythms (locked-to-tempo and free-time), which uses the Stratus engine to power Korg PS-3100 and Roland Juno-60 sequences.

The Korg patches feature a warm and pure bleep, which has clearly been heavily treated with tape. With their sharp attack and quick decay, they respond spectacularly to Stratus’s algorithmic patterns. The Roland patches are more like pads but still pulse and swell in an evocative and beautiful fashion.

If this sounds appealing but the matrix concept seems like hassle, relax in the knowledge that the Advanced folder lets you cut to the chase, loading just a single sequence and using Spitfire’s Mercury GUI to help you shape sounds with low- and high-pass filters, LFO routing, and other effects. Using the same engine, the Warps folder offers a more eclectic mixture of processed pads, drones, piano treatments and general musical gold.

Make no mistake, Stratus sounds gorgeous. It’s clean, crisp and capable of cutting through any mix, despite being warm, fuzzy, blurred and muted all at the same time. Does that sound non-committal? Listen to the demos online via the Spitfire website and you’ll see that this seemingly non-specific description is more than fair.

Stratus is an all-rounder, then, and its depths are all too easy to get lost in, which is always a good thing. Here are a few notes of caution, though. There will be times when you’ll want to apply Stratus’s sequence triggers to sounds outside of the library. As these sounds have been sampled as full sequences (and there’s therefore no editable sequencer within the interface), that isn’t possible.

The package is also easier to work with early in the composition process than later down the line. It’s an extraordinary instrument for helping you build atmospheres and phrases quickly, and it’s staggering where it’ll take your mind once you get a rhythmic cycle, sequence or pattern pulsing away. But if you’re already tooled up with other plug-ins and you’re tempted to reach for Stratus purely for its unique almost delay-tap style, don’t be surprised if it doesn’t work out how you want it to. When adding Stratus to tracks that have already been developed, you may find yourself wanting less – fewer repeats or less syncopation in the loops. Then again, you may find that the opposite is true.

Either way, what’s wonderful is that this is the first Spitfire-Arnalds collaboration that feels like a celebration of not just the Icelandic wizard’s piano work but his electronic experimentation with Kiasmos too.

If you’re a fan of Arnalds’ particular brand of electronics, you’ll be besotted by Stratus. And if you’re looking for a sophisticated sequencing engine to power a range of arresting sounds and patterns, Spitfire would love to collaborate with you in making some beautiful vapour trails.

If you’re drawn to polyrhythmic wide stereo pianos, Stratus is a vital purchase. Such a draw might only apply to a relatively niche group of producers but before the rest of you stop reading, know that this plug-in is first and foremost a vibe-machine. You cannot fail to cultivate or chance upon a valuable idea for a track while using this product.

Its matrix-based approach to pattern generation is its main USP but alongside its pianistic capabilities, it’s also a pattern generator for a rare Korg synth and a collection of beautiful sonic warps. If you like Ólafur Arnalds’ solo work or that of Kiasmos, examine this closely. After all, Spitfire’s pedigree speaks for itself. 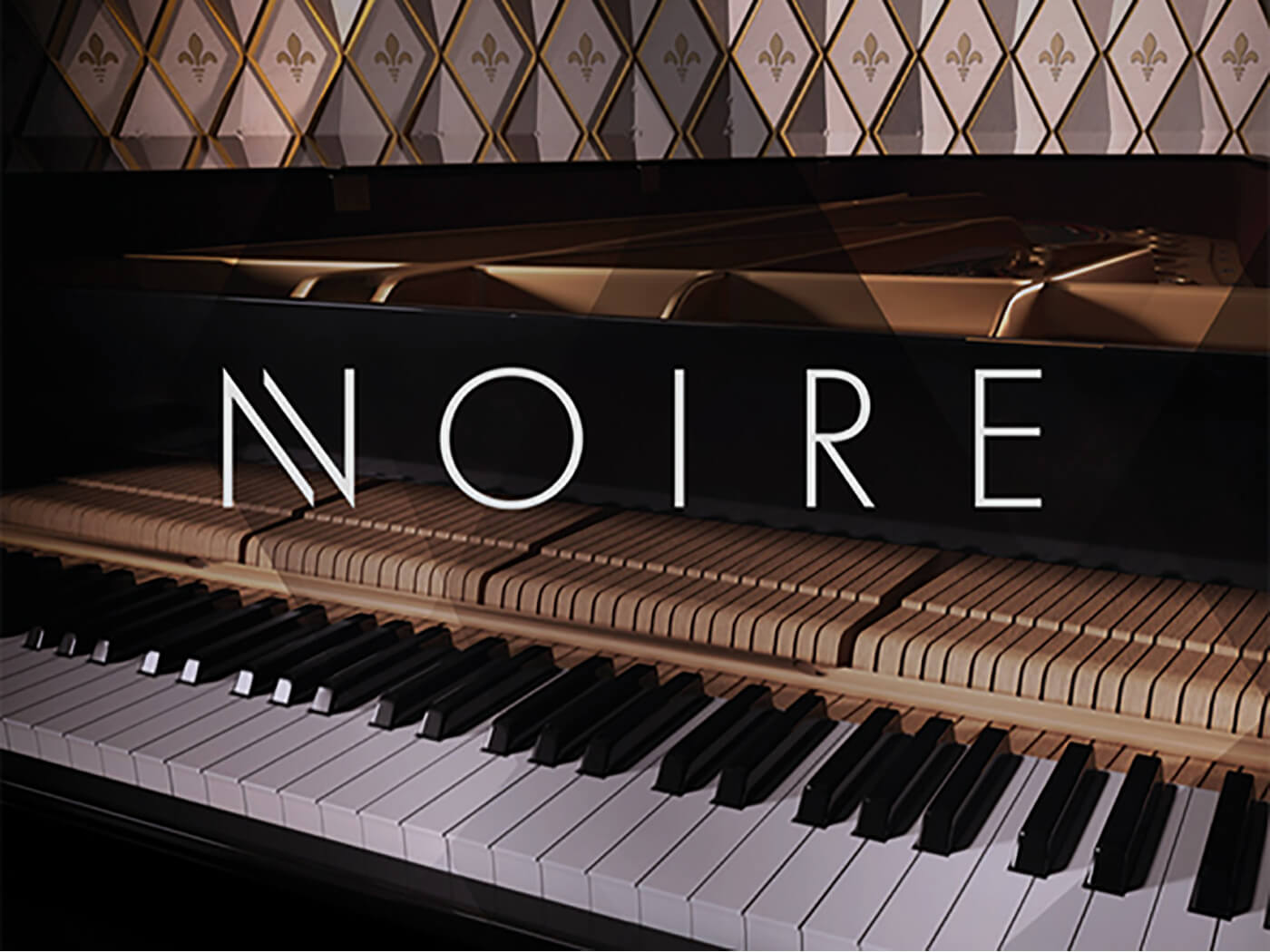 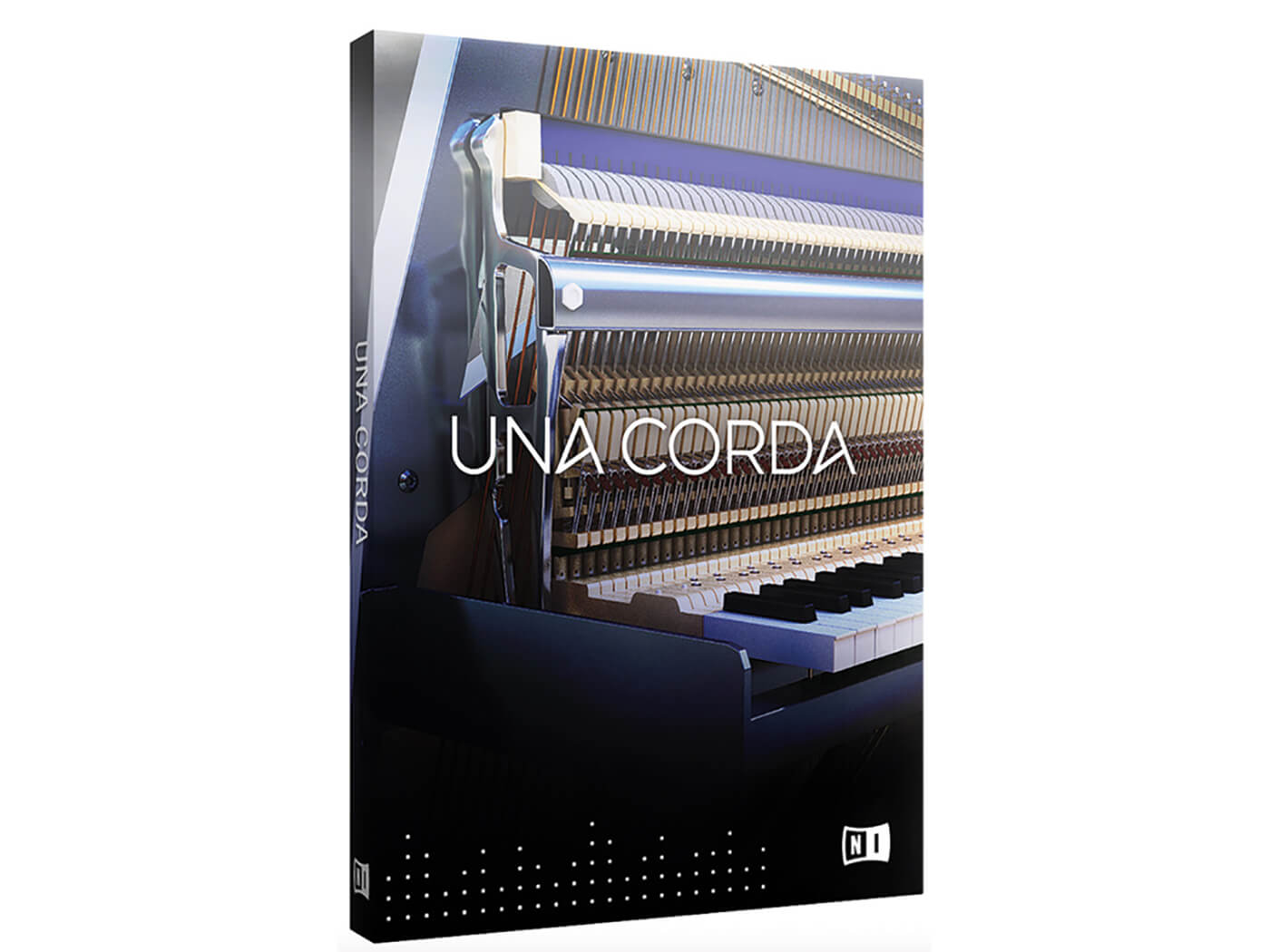 A customisable felt-piano plug-in with modules for pedal noise, onboard reversing, mechanics and more, this instrument has been heard on more TV shows, movies and in more piano-based EDM tracks than Arnalds has had hot dinners.