Orchestral conductors Sonokinetic put down the baton in favour of a cinematic new instrument capable of evolving textures and soundscapes. 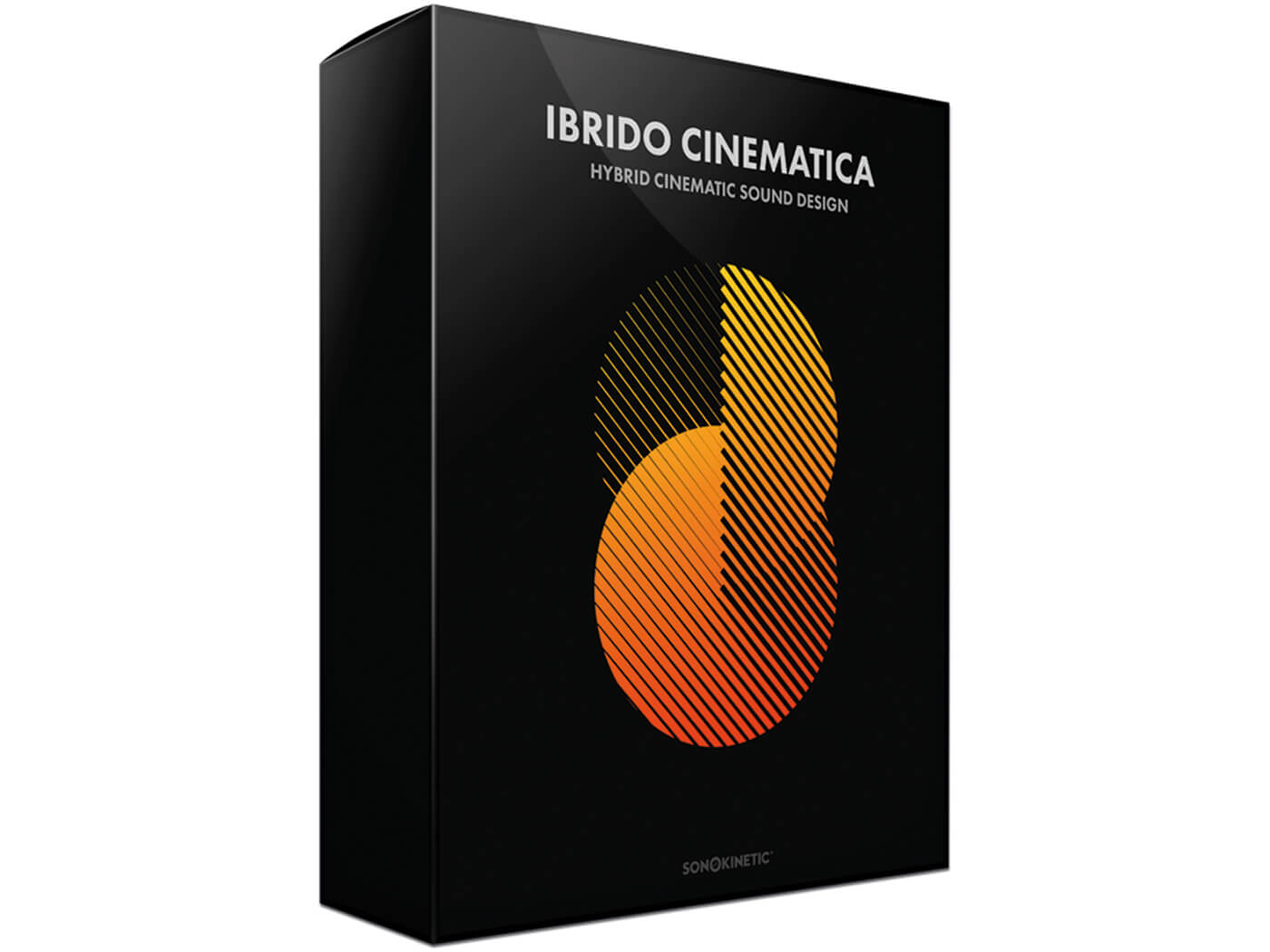 The Dutch sample-wranglers at Sonokinetic have in recent years done an outstanding job of establishing the company as a go-to for orchestral samples. Its uncompromising production approach involves only the best musicians, orchestras, venues and recording equipment, and this attention to detail shines through in all of its orchestral libraries.

The company doesn’t just focus on audio excellence, however, as is abundantly clear to anyone who has used its phrase-based libraries. These wed the exquisitely recorded samples to clever scripting that generates authentic orchestral phrases on the fly based on the chords and keys you play. As a means for generating orchestral music for TV and film, few other libraries come close to the simplicity, efficiency and quality of those offered by Sonokinetic.

Given this orchestral reputation, Sonokinetic’s latest library, Ibrido Cinematica, the first instalment in their new Ibrido collection, is something of a departure for the company. Why? There isn’t an orchestral sample in sight! As ever, the instrument is designed for use in Native Instruments’ Kontakt or Kontakt Player, and is aimed primarily at much the same users as other Sonokinetic libraries – those in the worlds of TV, film and videogames composing, and sound designers. Ibrido Cinematica does, however, fulfil a completely different compositional role to those other libraries: its speciality is the creation of constantly evolving soundscapes and sonic textures. 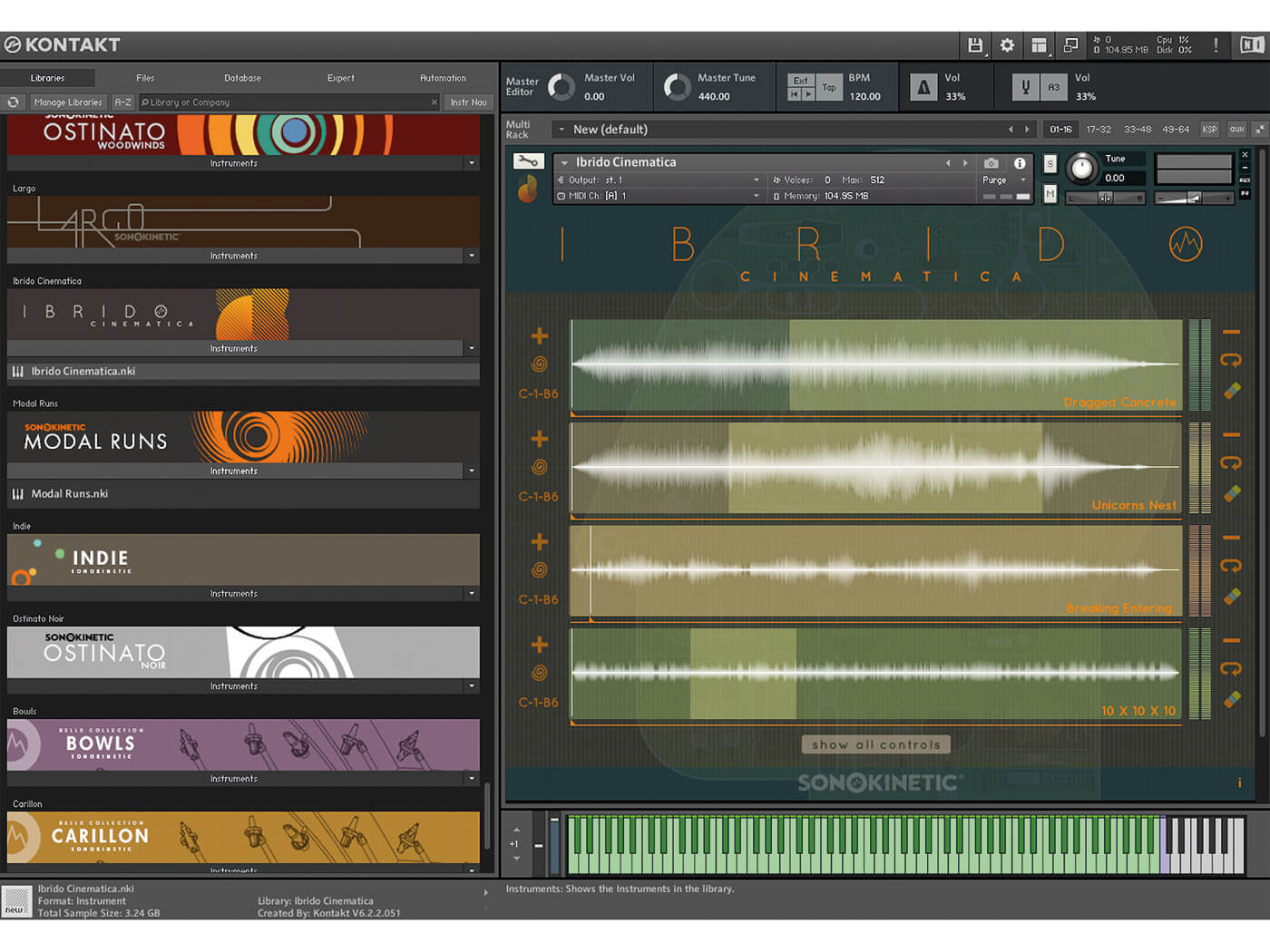 At the heart of the instrument lies a collection of more than 350 samples built from organic, acoustic and electronic sound sources, and hand-crafted by Mexican sound designer Juan Pablo Naranjo. The samples range from short hits and impacts through to long drawn-out atmospheres, and are selected from an integrated browser that organises them into four main categories – Ambiences, Shorts, Noise & Drops, and Shine & Crush – each of which has three subcategories.

The instrument works by layering together up to four of these samples, with each layer having independent sample start and loop points, along with independent automation curves for volume, pan, pitch and reverb. Each layer can also be restricted to a defined key range.

Of course, this being Sonokinetic, all of this is wrapped up in a user interface that’s as quirky in appearance as it is easy to use. There are two view modes: Zen and Show All Controllers. In Zen, the default is that each layer is represented by the waveform that results from the source sample being processed by its various modifiers. You can also select samples, set key ranges and start and loop points, and set the layer’s playback mode.

Switching to Show All Controllers mode reveals a more extensive set of controls, and provides access to the automation curves integral to each layer. The waveforms are overlaid with one of the four automation curves (buttons at the bottom of the layer stack allow you to select which curve is shown). You can then modify the curve by clicking and dragging over the waveform. It’s all very intuitive. 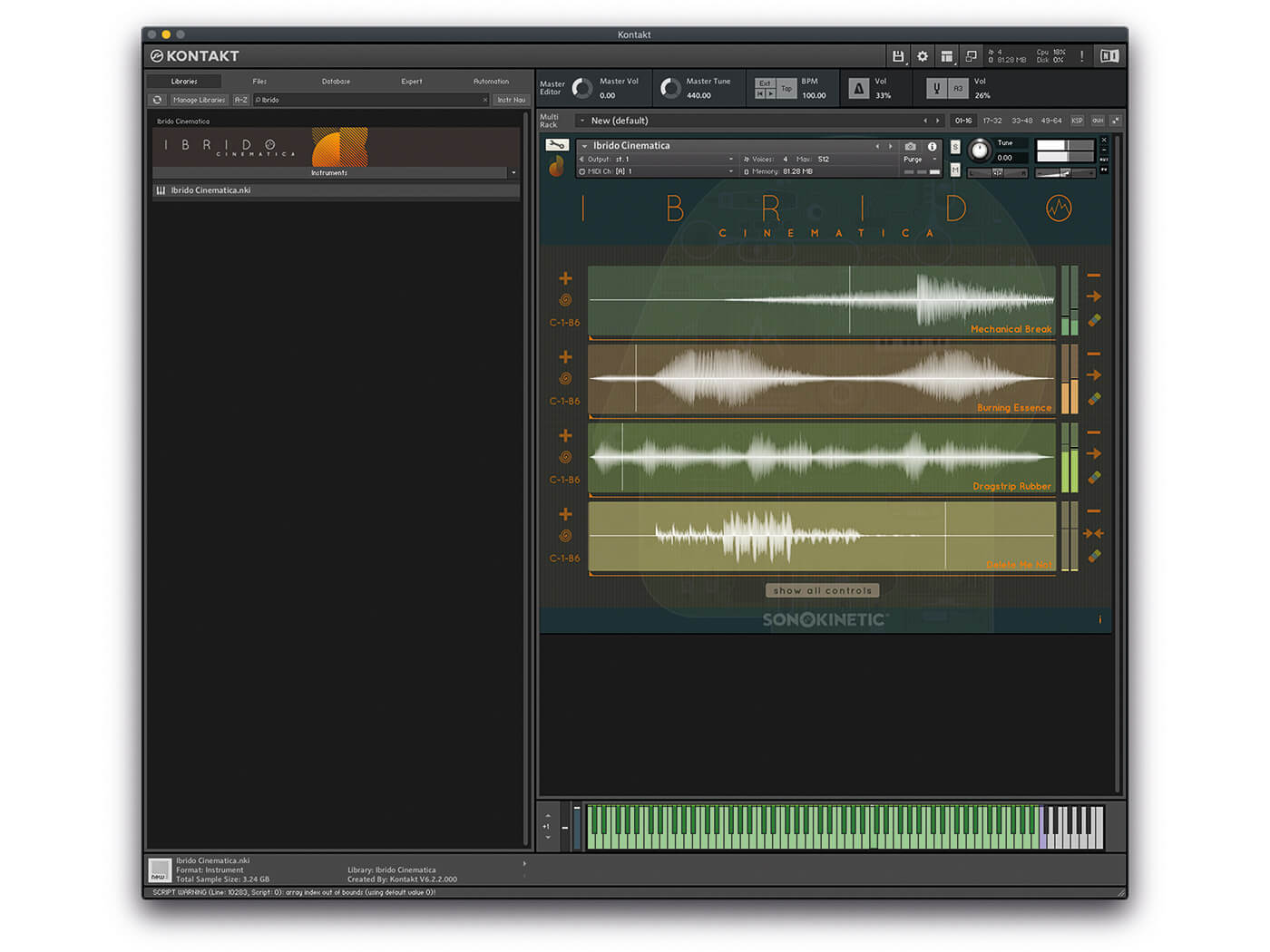 All waveforms are drawn at the same length in the interface, no matter the length of the underlying sample. When playing a note, position markers move along each layer’s waveform to show the current play position of the layer, and so move at different speeds depending on the length of a layer’s sample. Each layer can be set to play its sample once from start to end, or reversed from end to start. Alternatively, you can loop or ping-pong the sample, either in its entirety or based on loop points that you define by dragging on a layer’s waveform.

When using samples and/or loops of different lengths, the sound that results from the interaction of the layers changes constantly, and if it repeats at all it does so over a very long time scale. You can of course do such things by stacking up samples and instruments in your DAW but Ibrido Cinematica is directly playable and allows you to do in moments what may otherwise take a few hours to set up.

The instrument is, however, monophonic. Given that each note you play can be made up of such a complex stack of timbrally rich yet tonally ambiguous sounds, it’s not likely that you’d want to play chords as such, but it still feels limiting nonetheless. That said, the retriggering mechanism works well: if you change note legato-style (that is, you don’t release the first note until you have played the second), layers that are currently playing will change pitch without resetting their current play positions, so the sound doesn’t restart.

However, any layers that have stopped playing will be retriggered from their start. This allows you to create fluid movements in a soundscape while still having the ability to accentuate each change of note, which can sound wonderfully effective.

As a means of creating rich and interesting sonic bedding for use when composing to picture, Ibrido Cinematica is practically perfect, and provides an ideal toolkit that allows you to create such sounds in moments. The resulting soundscapes are unquestionably fabulous but their usefulness is limited to only a few scenarios and styles. That said, an imaginative sound designer will have no trouble using the tools and samples in Ibrido Cinematica to create strikingly original percussion hits, effects stabs, drones, rhythmic loops and so much more.

When composing, happy accidents occur when a combination of audio parts unexpectedly results in a moment of unplanned sonic awesomeness – perhaps a crazy harmony or chord rings out briefly or a fascinating rhythm coalesces for a few moments before evaporating. Ibrido Cinematica is a superb at producing such moments, and you can even leave everything completely to chance by using the instrument’s randomise feature and seeing what fate delivers.

In terms of the nature its sounds, Ibrido Cinematica is quite a break from the norm for Sonokinetic. But it’s business as usual as far as quality and attention to detail are concerned. The instrument is a far more versatile sound-design tool than it may at first appear and, no matter which way you look at it, it’s hard not to be both impressed and fascinated by the sounds of this powerful instrument. 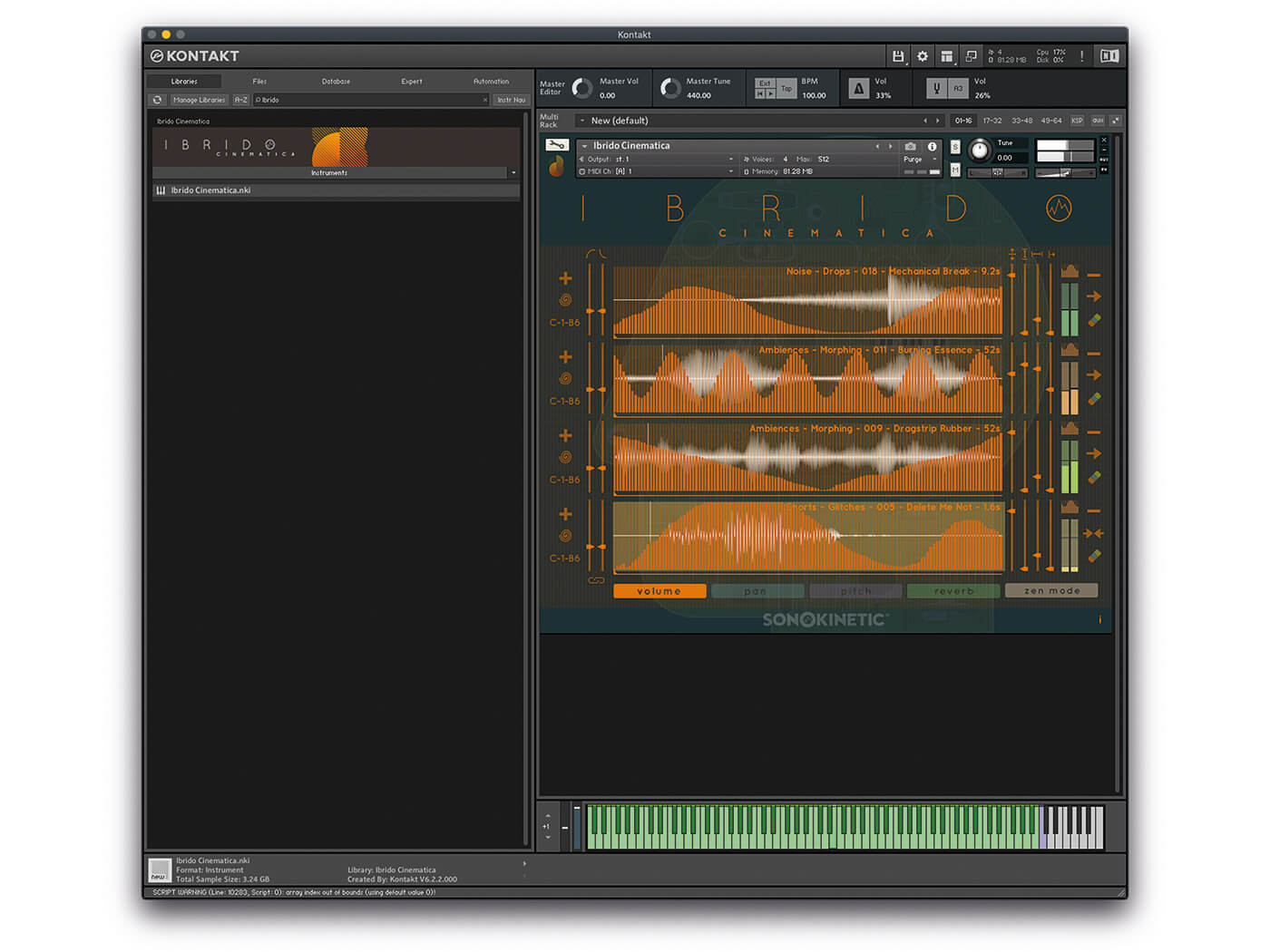 Ibrido Cinematica is clearly aimed at creating audio beds for use in film, TV and videogames, and in this role the instrument truly excels. It makes light work of creating and modifying such parts, and will be an invaluable tool for anybody producing this sort of music.

Sound designers too should take a serious look at this sample library, as it offers a near-limitless range of possibilities for creating new tones and textures that can be resampled and turned into loops and instruments in their own right. As for everyone else, if you enjoy having your eardrums tickled by interesting sounds and textures, whether as a source of inspiration or just for the fun of it, Ibrido Cinematica will not disappoint. 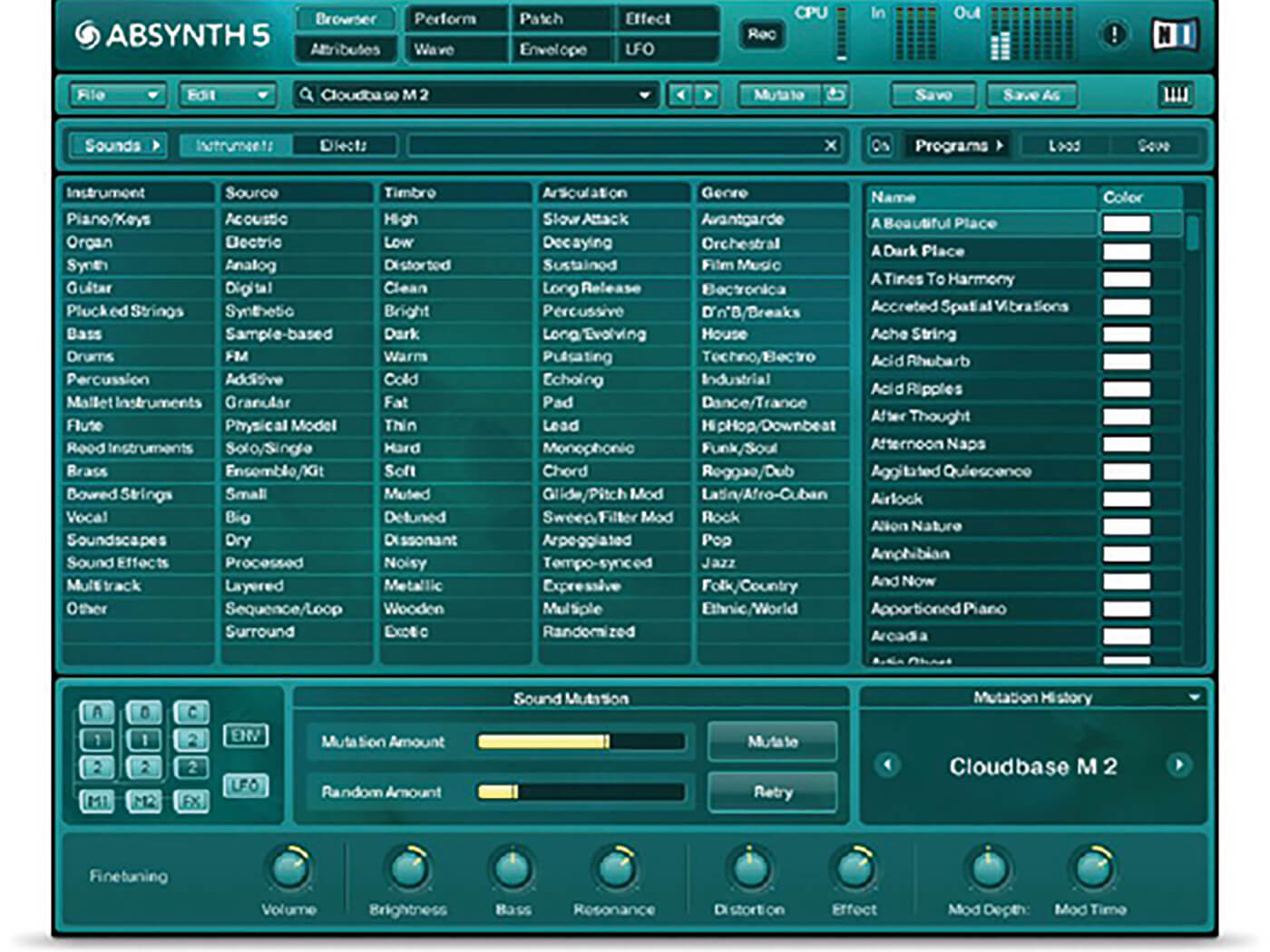 Regarded as one of the best tools out there for creating ever-changing soundscapes and otherworldly sounds, Abysynth 5 uses an impressive hybrid synthesis system that combines subtractive, FM, wavetable and granular synthesis into a single unified instrument. It’s not the easiest to program though. 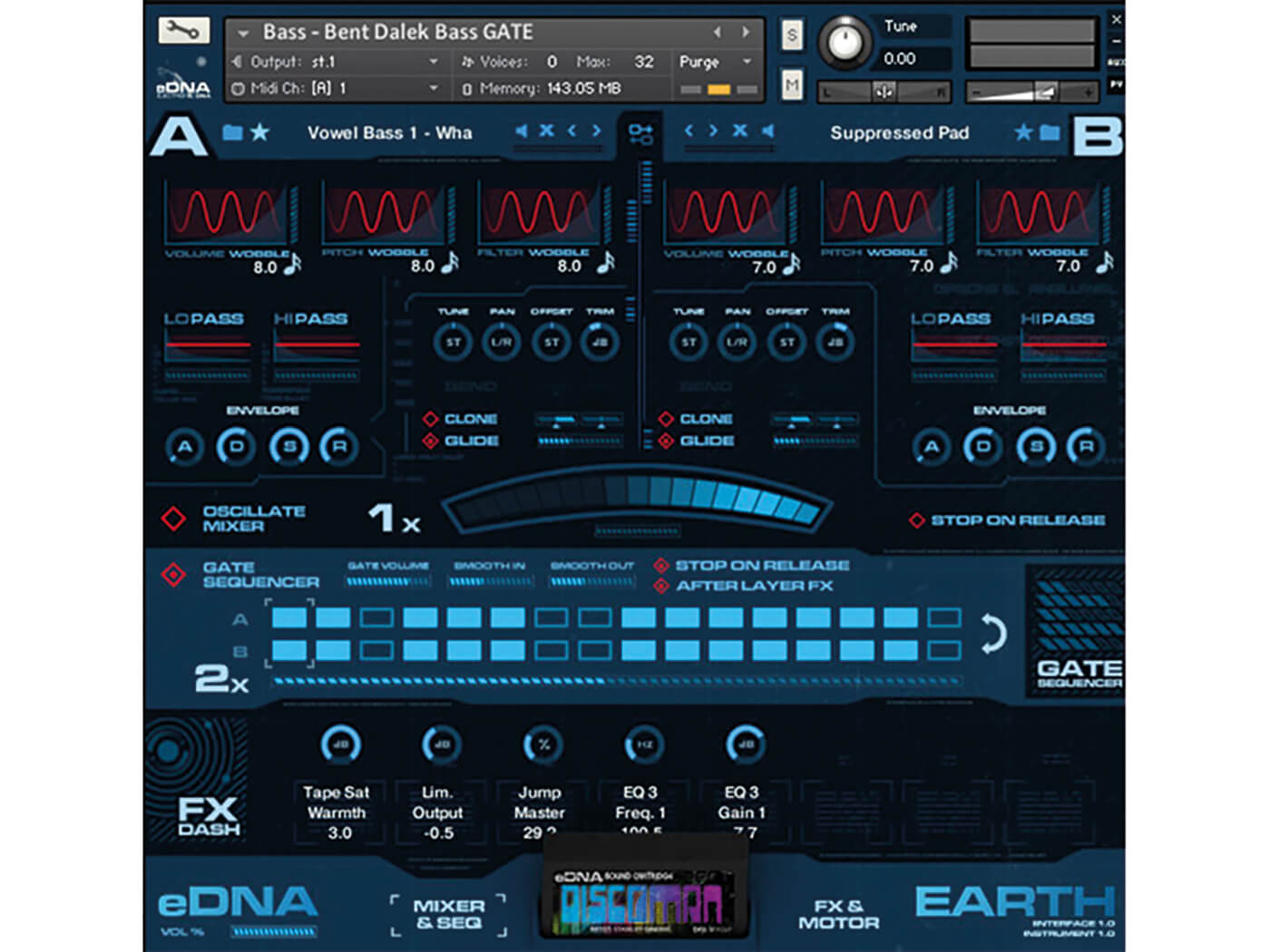 The eDNA Earth library incorporates elements from orchestral experts Spitfire’s other libraries, processed and warped in various ways, and then repackaged into their bespoke synthesiser engine for Kontakt.