A vintage vocoder emulation with a refined feature set – but can Softube bring anything new to this classic effect? 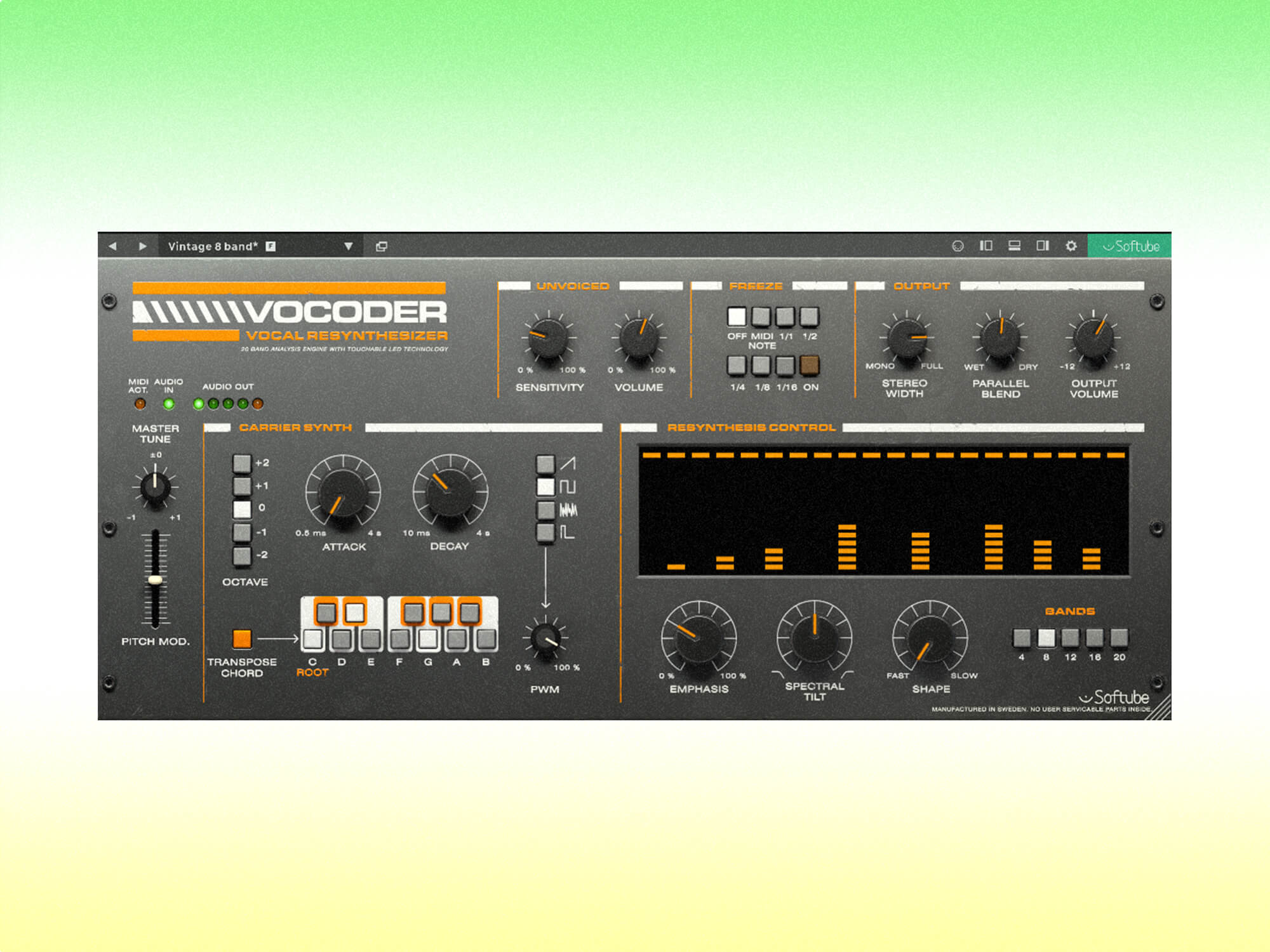 The vocoder sound flots in and out of fashion in popular music – there’s something about its robotic tones that just keeps us coming back for more. From ELO’s 1977 Mr Blue Sky through to Daft Punk’s Harder Better Faster Stronger and beyond, it somehow manages to simultaneously sound retro and futuristic.

But what does one expect from a Vocoder plug-in in 2022? Well, this particular release from Softube first saw the light of day as a UAD exclusive back in 2018, but is now being released as a native plug-in to be enjoyed by all. Although it’s arguably lacking when it comes to cutting-edge new features, it delivers a solid, classic vocoder sound with an analogue hardware feel.

You’ll need an iLok account to get up and running but, thankfully, Softube gives you the option to register the computer instead of an iLok key, which is more convenient. At Vocoder’s core is a six voice, polyphonic carrier synth, with a choice of four waveforms that play when audio is fed to the plug-in. These are Saw, Square, Noise and Pulse, with an accompanying dial to adjust the pulse width.

The waveforms all sound pleasing and react well to incoming audio, with each providing a different base timbre. It would have been useful to have the noise as an additional oscillator that could be added to the other waveforms though, which could help add some top end detail. That said, there is a clever Unvoiced section that helps in this regard – more on that later.

To trigger the synth, you can choose to insert Vocoder as an audio plug-in direct to the track, then use the small keyboard in the GUI to select which notes you’d like to play. In this way, you can select single notes, or play chords, which run as long as the timeline is playing and there’s audio being fed to the input.

You can also change the octave plus or minus two. In theory, you could trigger chord changes by drawing in automation to switch each note on or off, but it’s a bit cumbersome. A much better solutiom is to feed MIDI into Vocoder for a more nuanced live or pre-programmed performance. The specifics of how this is achieved will depend on the DAW but as we are testing in Logic Pro, we’re using it as a MIDI controlled effect. A small light shows that there’s MIDI input coming in, alongside one that confirms an audio signal.

When running via MIDI, you get access to attack and decay dials that control the envelope of the synth. Additionally, you have a Master Tune control, and a Pitch Mod slider that introduces either a subtle or more extreme vibrato, which is a nice touch for adding thickness.

Vocoder is well laid out and quick to get results, but it would have provided a bit more flexibility if there were a few additional features. In particular, control of pitch mod and pulse width mod speed, a mono mode with glide, and for the MIDI to react to pitch bend. On top of this, we found it impossible to coax any proper low-end out of the synth, so perhaps a sub oscillator could be another good addition.

This may seem like a lot of requests but, as the synth is the core sound generator for the plug-in, you want enough flexibility to make it sound and react how you want. These things aside though, the GUI is smartly designed and intuitive to use overall, so we can forgive Softube for not wanting to overcomplicate it with features.

The other core component of the plug-in is the Resynthesis Control, which lets you select from 4, 8, 12, 16 or 20 bands. With 4 bands, you get a narrower and more raw sound, compared to 20 bands that sounds fuller and with more detail. You can then change the volume of individual bands, which is a useful way to sculpt the overall tonality and reduce any nasty resonances.

You can further tweak the tonality using Spectral Tilt, which will shift the tone towards the lows or highs, and also the Emphasis control, essentially turning up the resonance for each band. This can have the result of increasing intelligibility and focussing the sound when used with spoken phrases.

Finally, there’s the Shape control, which either makes the synth follow the envelope tightly, or smooths things out making the tails ring out. This is great for creating interesting pads and textures, and we had lovely results creating unique reverb effects using the noise oscillator on a drum beat and setting the dry/wet to 50 per cent.

Speaking of which, the main output section gives you a Parallel Blend control for setting the dry/wet balance, a Stereo Width control that sends alternate bands to the left and right channels, and a master output. You also get Softube’s Extended Features that include extensive input and output volume metering, and a gain difference feature that can match the perceived input and output volumes.This is especially useful given that changing the oscillators, emphasis, and band settings can make a big difference to the overall volume.

You may be forgiven for thinking that thus far, Softube is playing it fairly safe with Vocoder’s features. But the final two sections are perhaps its most innovative additions.

The Unvoiced feature helps add some sibilance and top-end detail back into the signal. It sounds a bit like some sort of envelope follower that lets snippets of noise poke through to help improve intelligibility, which is very useful for speech and also for adding punctuation to drum transients and hi-hats.

There’s a Sensitivity dial to control how much of the signal is used, and then a Volume control to blend it in.The other section is called Freeze, which will capture and hold specific formants. This can be triggered at any time, or set to re-trigger on different subdivisions of the beat, creating some unique, rhythmic resonance patterns that sync to the host bpm.

We compared the sound of Vocoder to some other effects, including Logic’s native vocoder, and found it to have a superior, smoother and classier sound.There are perhaps other options that will give greater flexibility such as iZotope’s Vocal Synth 2, but if you’re after a solid sounding, classic vocoder effect, then it’s hard to beat.