The success of Eurorack has seen a revival in hardware synthesis, so why would you want to do it in software? Propellerhead presents several complex reasons. 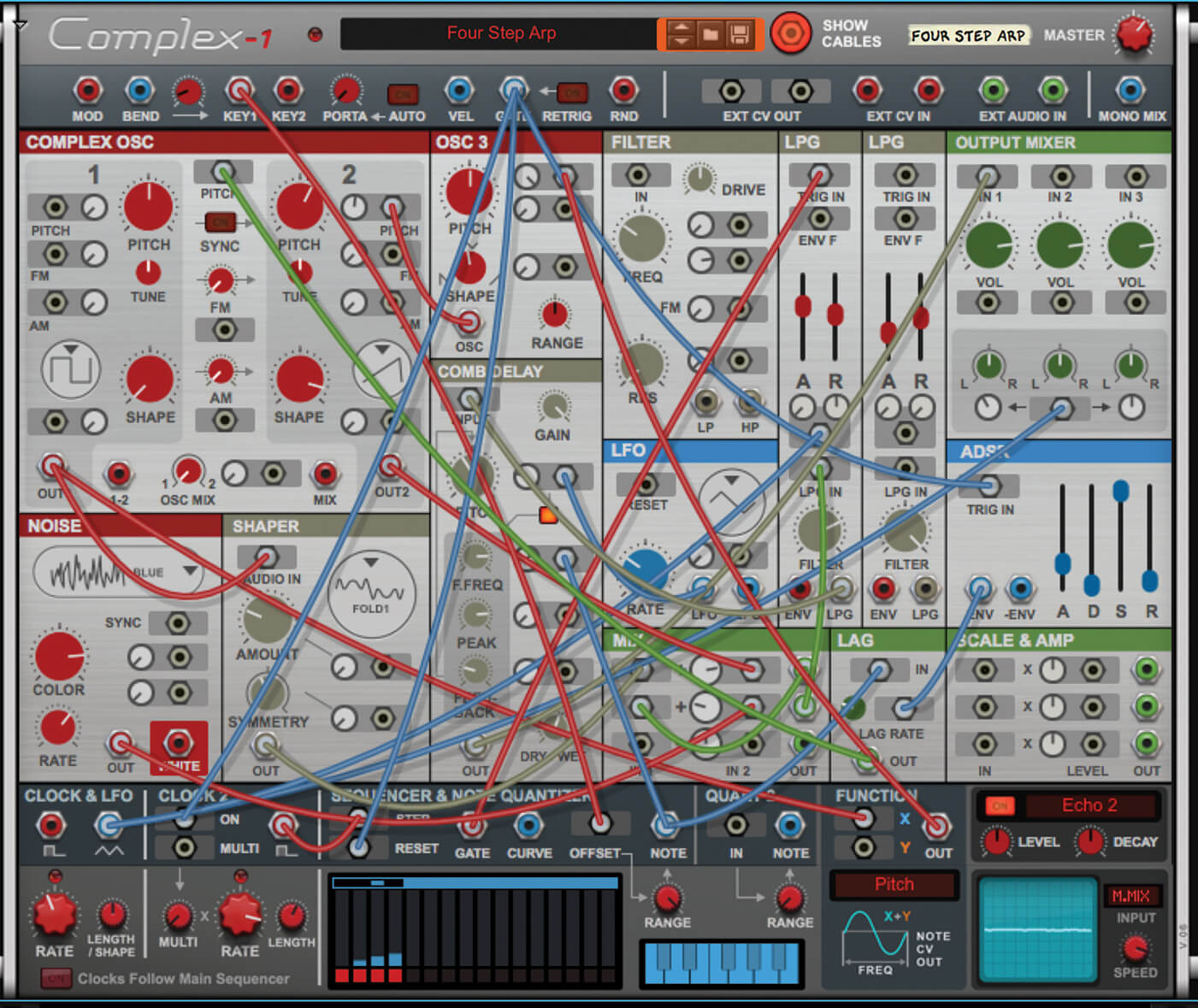 The absolute earth-shaking, awe-inspiring, leftfield and totally surprising phenomenon of the last decade in music production has been the re-emergence of the modular synthesizer. You can often tell when something becomes a bit of a ‘thing’, though, as it can often be quite divisive.

Like many topics in 2019, Eurorack synthesis has its proponents and its opponents. Collecting synth modules can be the best and most addictive thing since collecting Top Trumps (for older readers), cigarette cards (even older readers), or Pokémon Go. Or it can be seen as, well, basically a long-winded way to build a snare sound.

What is certain is that a big part of its appeal lies in the fact that it is a way to make music without having to use a computer. Being hardware, you actually plug things in and it takes up physical space in your studio, creating a wall of flashing lights that will undoubtedly be impressive (even though you might really have no idea what it does!). So having it in software? Well, that’s hardly what you might call ‘pure modular’ is it?

That said, there have been a few developers – notably Native Instruments and Softube – who have had pretty good stabs at replicating all the joy (bar the hardware) of Eurorack behind a computer screen. It may not be the movement’s raison d’être, but modular synthesis in software certainly has its fans. Propellerhead has noted that in a big way with Complex-1. 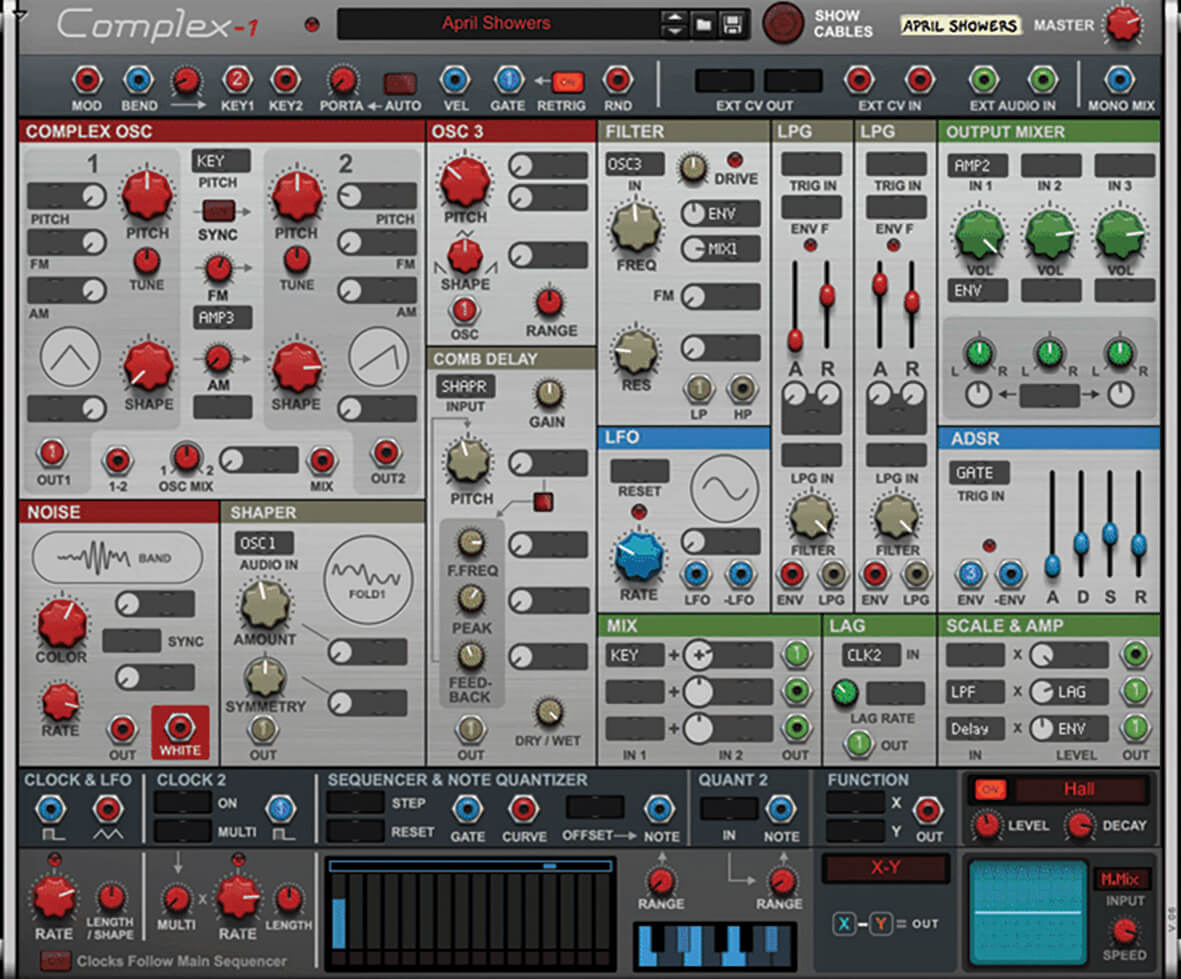 I, for one, can instantly see why Eurorack in software might be a good idea. Yes, it doesn’t offer all that hands-on, plugging-in physical fun, but you can (usually) afford it. And doing it in software gives you a trial run of the concept, as well as some space to experiment and make mistakes – certainly, the Undo button is software is a godsend for modular virgins. That really is how Complex-1 is being pitched. Propellerhead states that Complex-1 is the ideal entry point for modular synthesis, and what you learn on it can easily be transferred to a hardware system, yet it also describes it as the most complex Rack Extension it has devised.

Clearly then, there might be a potential clash of direction going on here – can it be both complex and good for beginners? Well, it’s time to find out. I’ve been tempted by modular, bought a system, sold the system, and am now building a completely different system, so Complex-1 could swing my interest either way.

Breaking the available modules down, then, let’s start with the oscillators. We get both flavours: traditional analogue (which can be used both as a source and LFO) and more complex dual (with AM and FM options), plus a noise generator. Similarly, with the shaping modules, you get traditional filters alongside the Buchla low-pass gate and waveshapers. There’s also a comb filter delay here that Propellerhead describes as more of a ‘playable’ filter that’s great for strings and effects. 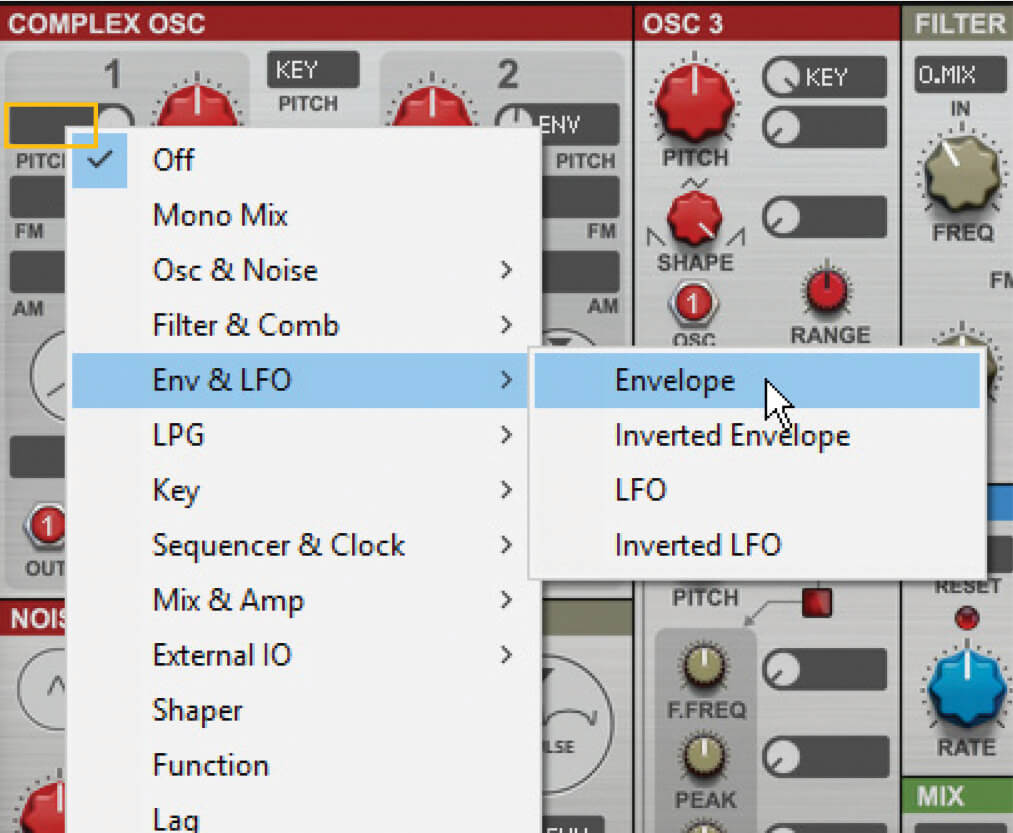 Other, more standard modules include an ADSR (for adjusting attack, decay, sustain and release for volume and other envelopes); a simple LFO (with both rate and depth options); plus a couple of mix and clock-sync modules. Finally, there are sequencer and Quant modules for creating melodies and controlling modulation, plus an oscilloscope and Function module for more in-depth algorithmic functions.

It really doesn’t take long to understand how to put these together, and patch cabling is as easy as you’d expect, given that Propellerhead has made something of a name for itself with the cabling around the back end of Reason. You’ll quickly get into patching everything together and understanding the signal flow involved. You can choose to have the wires shown, or not, although obviously, if you want to get into patching – very much the point – then you’ll want these shown.

Perhaps the best way to get into Complex-1 – whether you are a seasoned, older Eurorack veteran of millions of HP or a beginner plugger-inner – is to load up some of the many and varied patches and tweak away. Presets are in folders that include Bass, Abstract, Sequenced and Melodic, although relative newcomers might want to dive into Templates and Examples and load up something like the basic LPG patch. Here, you can easily recognise the signal flow – straight from the Complex Oscillator to Output Mixer. I add in a filter, then route it to the Comb Delay; and suddenly, I have an inspirational metallic monster on my hands. I’d like to pretend that was completely intentional but, truth be told, it was more by luck than judgement. But isn’t that one of the joys of this kind of synthesis?

As soon as you’ve mastered the basics, then you can start delving into more complex sounds. Again, you might wish to go into the pre-created efforts here, as they quickly ramp up in complexity. It’s a good idea to delve into the Sequencer folder, for example, and discover its gated interaction with note triggering. You’ll also learn more – as I have – about how important some of the more utility-based modules are, and overall, I think there is a great range of different modules included, at least giving a taste of the most important flavours of the format.

The presets also give a very good picture of how big, wide and expansive Complex-1 can be, the addition of both Buchla- and Moog-inspired modules really pays off. As well as the more obvious ‘yep, we’re at Superbooth’ sequences, there’s definitely more of an aggressive sound here. Certainly Complex-1 can teach you, but it also rocks your cones. 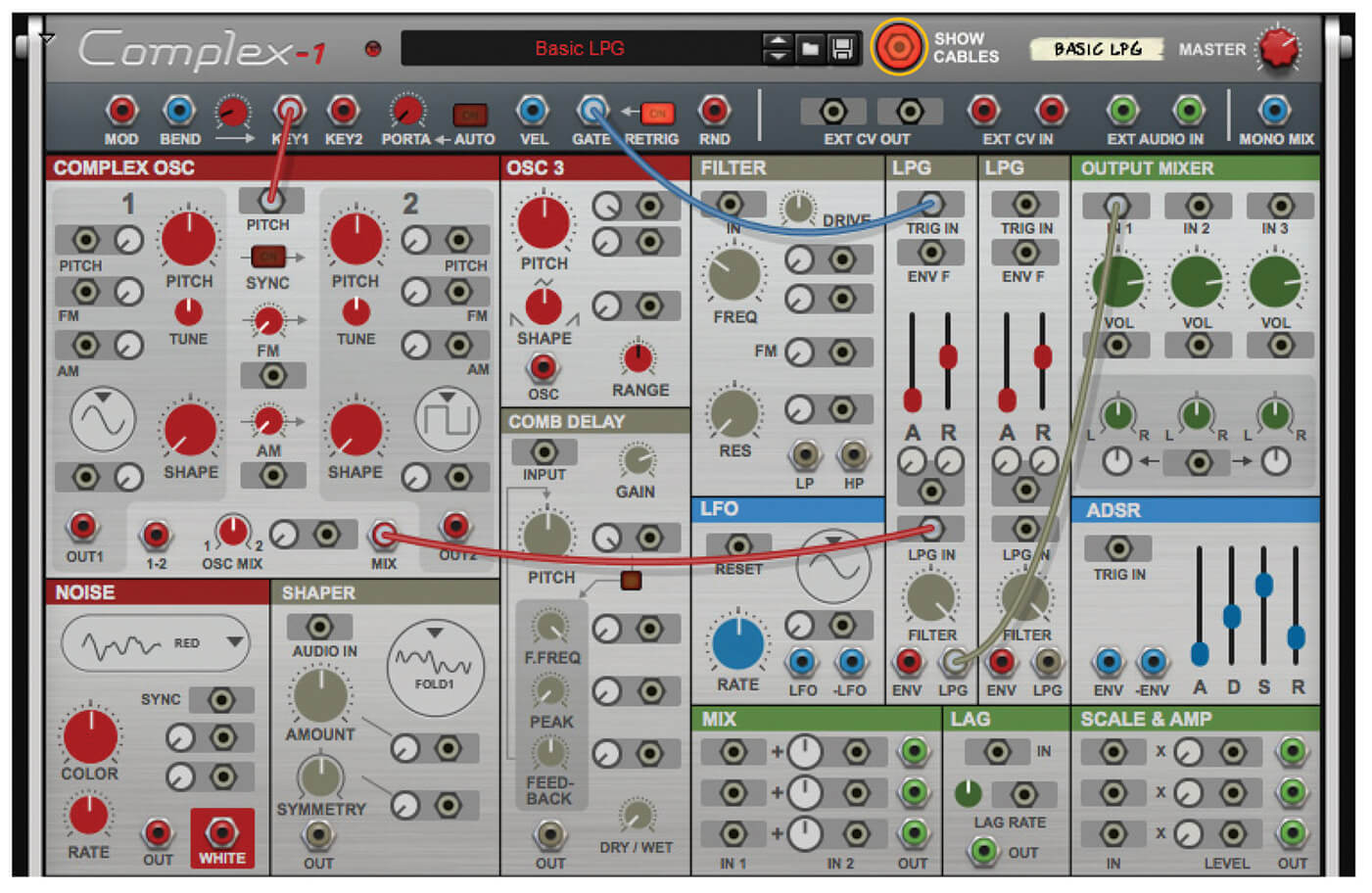 Best of both worlds

Complex-1 can be very complex indeed, but thankfully, it treads a nice balance between offering an introduction to modular and impressing with its sound. I do wonder if it will appeal more to relative beginners or people like me who are just that bit further along, wishing to dabble with the hardware. You can’t help thinking that more seasoned users might sniff at a software approach… which would be a shame, as Complex-1 could act as a brilliant recreation of a hardware setup for a more mobile version, and even as an important component within some kind of hybrid setup.

For beginners, or people lacking space and cash, and for dabblers, Complex-1 offers a lot. Education, for sure, but it’s also a thoroughly impressive best-of-both-worlds approach. You get to enjoy all of the experimentation of plugging away, creating something new and taking the credit for what you absolutely had planned all along, and you also get the joys of software: meddle with someone else’s creations and save what you come up with, with ease. So, overall, Complex-1 might well be the non-complex route into modular you’ve been waiting for.

If you have a wall of modular, then you will a) not need this, b) be too busy to be reading this, or c) be Junkie XL and probably get it for free. If you are new to modular, then Complex-1 is what you need to take your first steps. It will help you decide whether to either embark on that path to synth obsession, or opt for more time spent with loved ones and a fuller bank account. I’m joking, of course, but Complex-1 is great synth bridge for many synth paths. 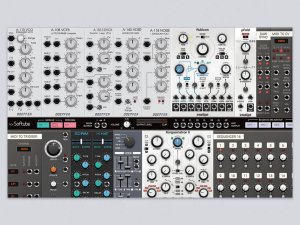 More customisable in its approach, Modular allows you to create really open-ended systems from a core set of seven modelled modules from hardware experts Doepfer. Add more as you go – as with the hardware, but with less studio space required. 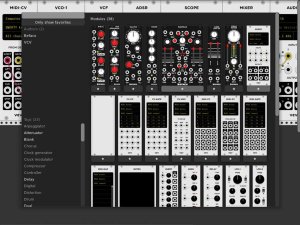 There are some other big guns – Native Instruments’ Blocks/Reaktor, Max For Live – where you can create modular in software, but this is an intriguing free system where you can choose from a good selection of open-source module creations.