Details Price £69/$99 Contact MSL Professional 0207 118 0133 Web www.softube.com It has to be said that there is an element of commitment involved in getting into Eurorack and modular synthesis. There’s the inevitable inherent price tag and then there’s the bewildering array of modules available, so if your path towards modular glory is laced […] 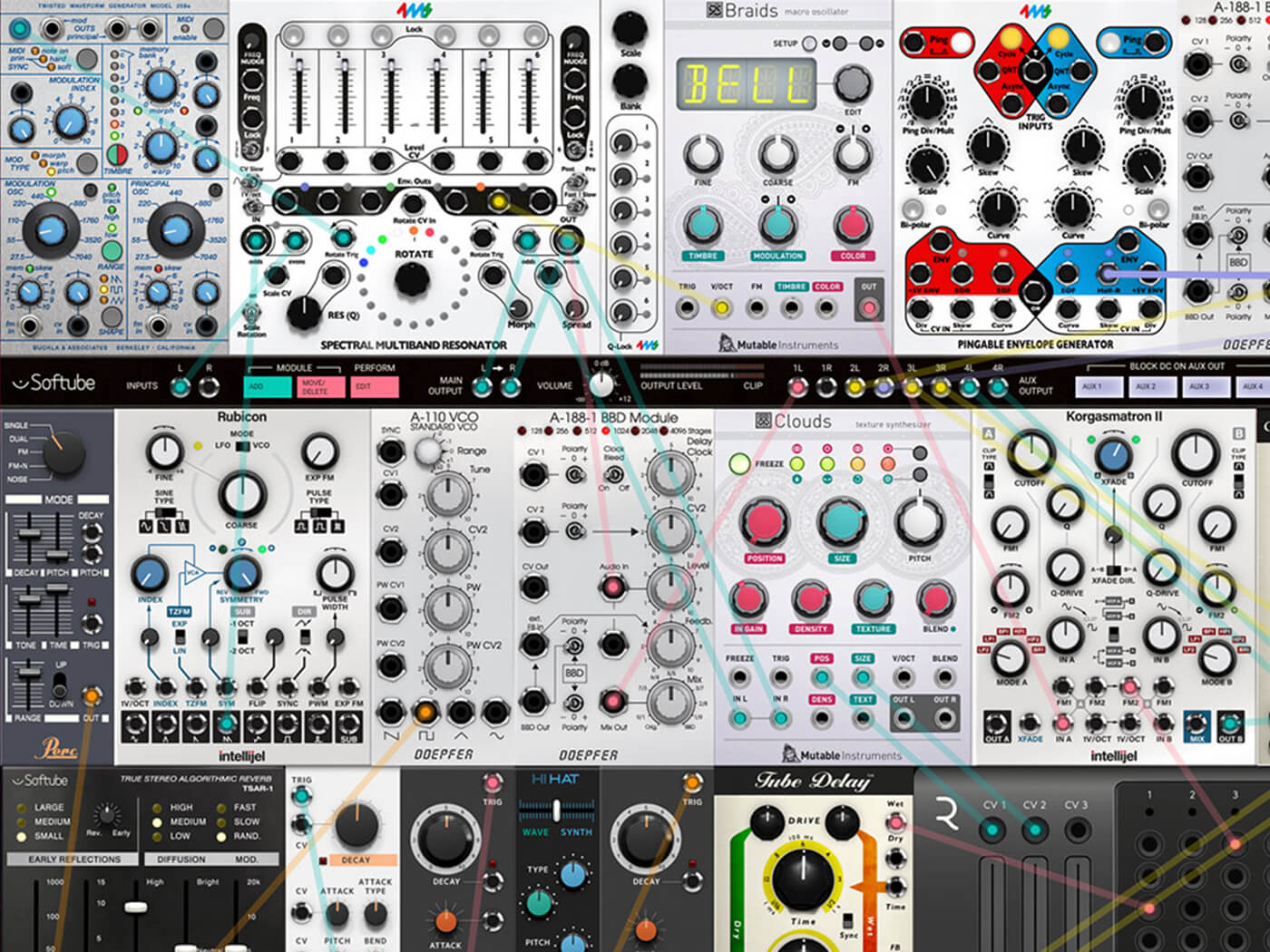 It has to be said that there is an element of commitment involved in getting into Eurorack and modular synthesis. There’s the inevitable inherent price tag and then there’s the bewildering array of modules available, so if your path towards modular glory is laced with trepidation, the new Softube Modular could well be the answer – at least in the short term.

Once installed, Modular appears seamlessly in your DAW, and springs open to reveal a blank case. “Where are all the modules?” I cry, but then, clicking the intuitive Add button reveals the available units with six basic, but good, modules from Doepfer, and a host of utility modules.

The ethos of Modular is to offer the user modules from the real world, and while there’s a large collection of generic utility modules, many of which offer the sort of functionality expected in a Eurorack, there’s also a helpful smattering of modules from existing companies, most notably at this stage Doepfer and Intellijel, with the latter requiring an additional small purchase.

Diving straight in with some of the presets purely to get a taste of what is on offer, I was immediately hit by the depth of the sonic palette. The bottom end is thunderous, with wonderful warmth in the lower mids, while the top end offers a wispy quality. It could be argued what I was hearing in the presets is akin to what I refer to as the ‘Bose effect’ – where the frequency palette is coloured by an overarching top and bottom end, that feels pleasing to the ear in its initial form. So now was the time to break open a pack of virtual patch cables and build up a timbre.

At this point, I discovered any illusions I may have had that this wasn’t a traditional modular were about to come into sharp focus. Creating a sound, I had to take off my ‘DAW-based soft synth’ hat, and very firmly put on my ‘Eurorack boffin cloak’. This synth will not make a sound unless you look after the basics; you’ll need a MIDI-to-CV module to be in place if you want to trigger a sound from your keyboard, so having attended to this, I moved to an oscillator. The Doepfer A-110 VCO is one of the first modules on view, so this was my starting point.

Once selected, the module appears in the modular case, and is ready for use, which essentially means patching it in – it’s a modular synth, remember – so rather than waste time, in goes a filter, VCA and envelope. Patching together is a cinch, thanks to the elegant design of the interface.

As you select an output, all the available inputs for connection glow green, as does the cable you are connecting. However, just like a modular, it is still possible to make CV connections that might not illicit a response at first, so unlike many soft synths, if you’re creating a patch from scratch, you will need to engage the grey matter to ensure that connections make sense. Helpfully, cable colours alter with each one patched, so it’s easy to trace the route of any cable.

And so the fun can begin, as it is even possible to build step sequencers into the frame as well, which will then, in turn, clock to your DAW, via the helpful DAW Sync module. However, special mention must go to the additional modules that are available at extra cost.

There’s a great choice of basic Doepfer modules available straight out of the box, which will more than allow you to get going, and Softube has implemented its own Heartbeat drum synth into the system – also at additional cost – which means you can turn your modular into a very beefy drum machine; but it has also teamed up with Intellijel to model the Korgasmatron II filter, Rubicon VCO and µFold modules. 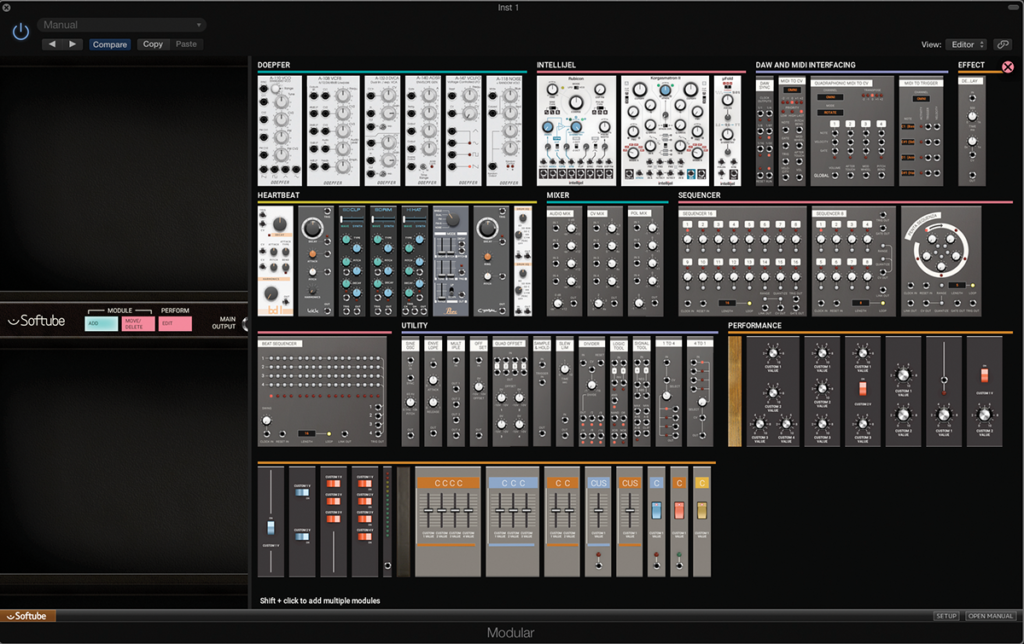 The Module Selection menu – it’s the equivalent of pick ‘n’ mix, and just as sweet to bootFurther models from other companies are in the pipeline, which ultimately means that the Modular is pretty future proof. In the short term, you might want to consider the Intellijel extras, because even though it’s perfectly solid, the tonal colour of the Doepfer module set will inevitably become tired in use.

It’s worth mentioning that authorisation of Softube Modular is made through the iLok system which, if you are not familiar, is a pretty well established anti-piracy and authorisation system. The ideal setup is to have an iLok USB key, which will hold iLok licences; but the said licence can also be written to your computer’s hard drive instead, if a USB key is not present. This can be slightly more complicated if transferring a licence from one machine to another, which is why many prefer the iLok USB-key method, as the key can be easily moved. iLok is also used by many other companies (Eventide, Synthogy, Celemony, iZotope, Avid) as an anti-piracy system, so the likelihood is that you will use it for other software over time.

There is no doubt that if you want a modular on a budget, this is an excellent solution, and I cannot overstate how good the Modular sounds, but there are lots of great soft synths out there, and I think the question is more about whether you’re the sort of electronic musician who likes to experiment. If you are, this will most likely open new horizons, but if you’re after presets aplenty, this is probably not the best choice for you.

If you’re really into the concept of a modular synth on your computer, then there are a number of very fine options available in this arena. Arturia has modelled the Moog Modular and the ARP 2600, both of which are excellent clones and cost a fraction of the price of the vintage examples. If you own a Roland AIRA FX pedal, you can use Roland’s new Modular Customizer, which will allow you to build a modular on a Mac/PC or iPad, and load it into the pedal for use. Similarly, if you have an iPad, the new Moog 15 App, from Moog, is outstanding – with all the touchy-feely elements that can be exploited on a touchscreen device.

I have always been a little sceptical of modular synths in software format, and this is quite possibly because I am so spoiled by using the real thing, but I have to say that I really enjoyed my time with the Modular. The overarching fact is, it sounds huge and certainly to my ears, there’s some very realistic modelling of third-party modules.

16 notes of fun… the step sequencer ready to sync to your DAWSo, are there any circumstances where it could actually take the place of my Eurorack? Only time will tell, and this is most likely to be dictated by the situation and how practical it is that I will have my Eurorack with me. The basic, slim collection of tonal modules that are currently available at this time is a minus, but with more modules on the way, Modular is a great investment if you want an inexpensive version of modular on the move.