Crossing streams is a specialty of this Ohio-based company, whose creative plug-ins bridge the gap between analogue and digital. We dip our toes into its latest release, a granular-synthesis instrument with minimal CPU-drain. 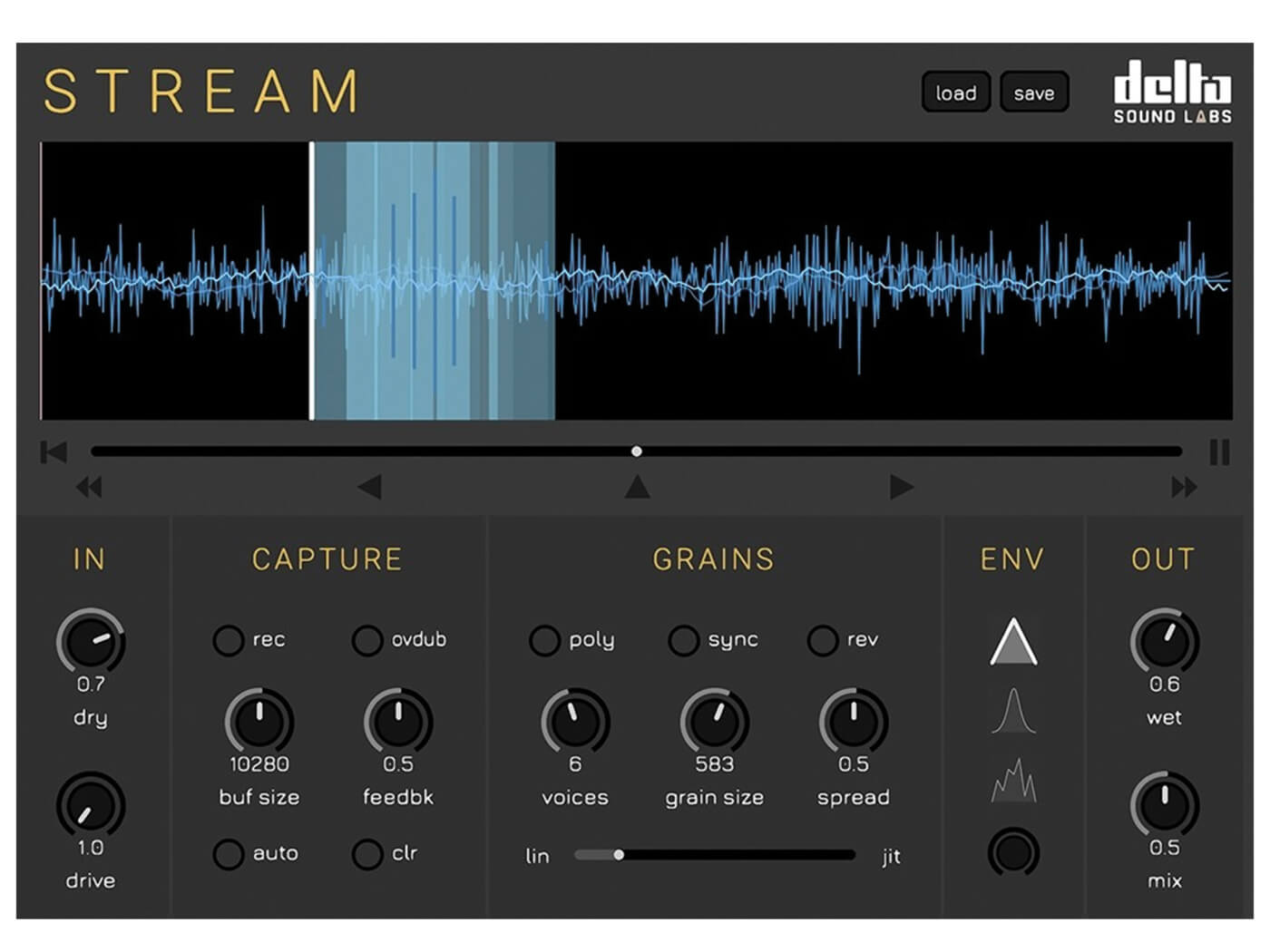 From rough crossings to smooth sailing, granular synthesis is capable of many sounds and textures. Stream, the new plug-in from Cleveland, Ohio’s Delta Sound Labs, is evidence of that. The intuitive instrument uses audio of up to 20 seconds in length to form sounds that range from jagged and bumpy to even and glossy.

Stream boasts a simple layout based around a central display, upon which sits easy-to-read white-on-dark-grey text. It’s divided into five sections. The first is In, which features controls for input volume and drive, for adding distortion to the input signal. To the right is Capture, which includes Stream’s all-important record and overdub buttons, as well as settings for buffer size, which can be set manually or automatically as record is toggled on and off, and feedback.

The Grains section features the poly switch, which makes Stream more playable as a regular software instrument despite being an audio effect. It takes incoming MIDI notes directly from a keyboard if Stream is loaded into a MIDI track or, if it’s on an audio track, MIDI can be routed from a separate MIDI track. The adjacent sync button sets grain sizes to note values, and next to that there is a reverse button. Below these, there are controls the number of voices, grain size (when not set to notes) and spread, which determines the overlap between each voice.

This is presented clearly via the central display, with each voice appearing as a blue region onscreen, the area they cover determined with the grain control, and the overlap altered as you move the controls. At the bottom of the Grains section is a horizontal slider that increases the randomisation of the playback position for each voice as it’s moved from left to right.

The fourth section, the Env panel, presents a choice of ‘windows’ that affect Stream’s playback characteristics: Triangle is the smoothest, Gaussian is more rhythmic, and Noise is suitable for noisier percussive textures. Above the five sections, below the visual display, there’s a horizontal playback bar through which it’s possible to click and drag to speed up or slow down playback in either direction. 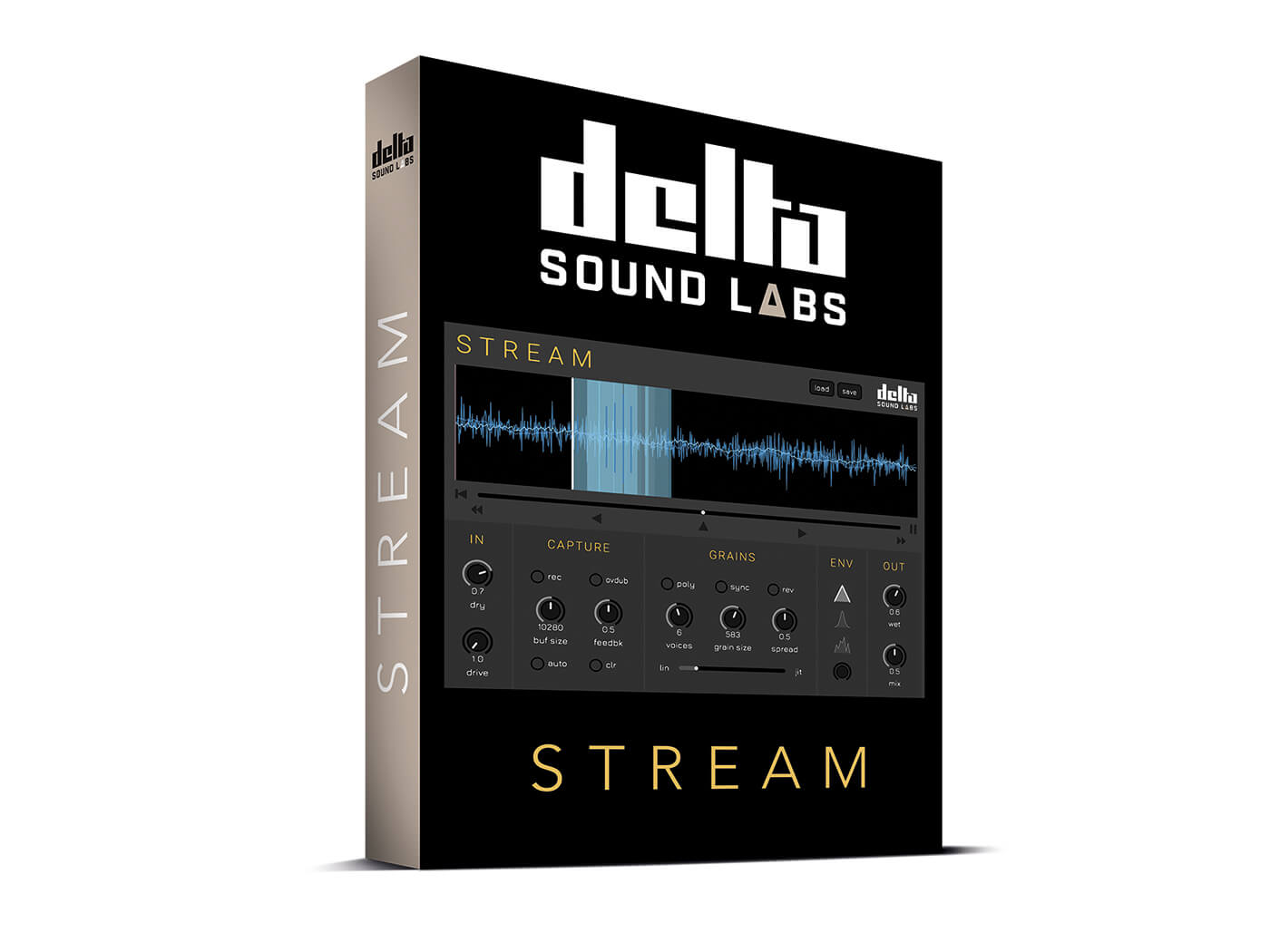 The plug-in’s final section is the Out panel, which contains a mixer section. Stream can be added to audio or MIDI tracks but it has to grab from a live audio input or a sample in order to work; it doesn’t work like typical audio effects whereby it’s applied to everything passing through it. By using the record and overdub buttons, Stream can stack up layers like a looper effect. We try it with beats, piano chords and spoken word, and are impressed with just how easy it is to get interesting results from all the elements we throw at it. We record vocal ahhs into the buffer and jam with those, and these work well as a starting point too, ideal for building up compelling layers and textures.

Everybody should have at least one granular synth plug-in in their arsenal, and Stream sounds excellent no matter what you feed it with, yielding stutter-like effects at high note values and moving into smooth shimmer-style territory at lower values. The presets are an efficient way to get to know what this plug-in is capable of, and Delta Sound Labs has a set of accessible tutorial videos on its YouTube channel too. There’s also a free limited version on the website, so you can try before you buy. 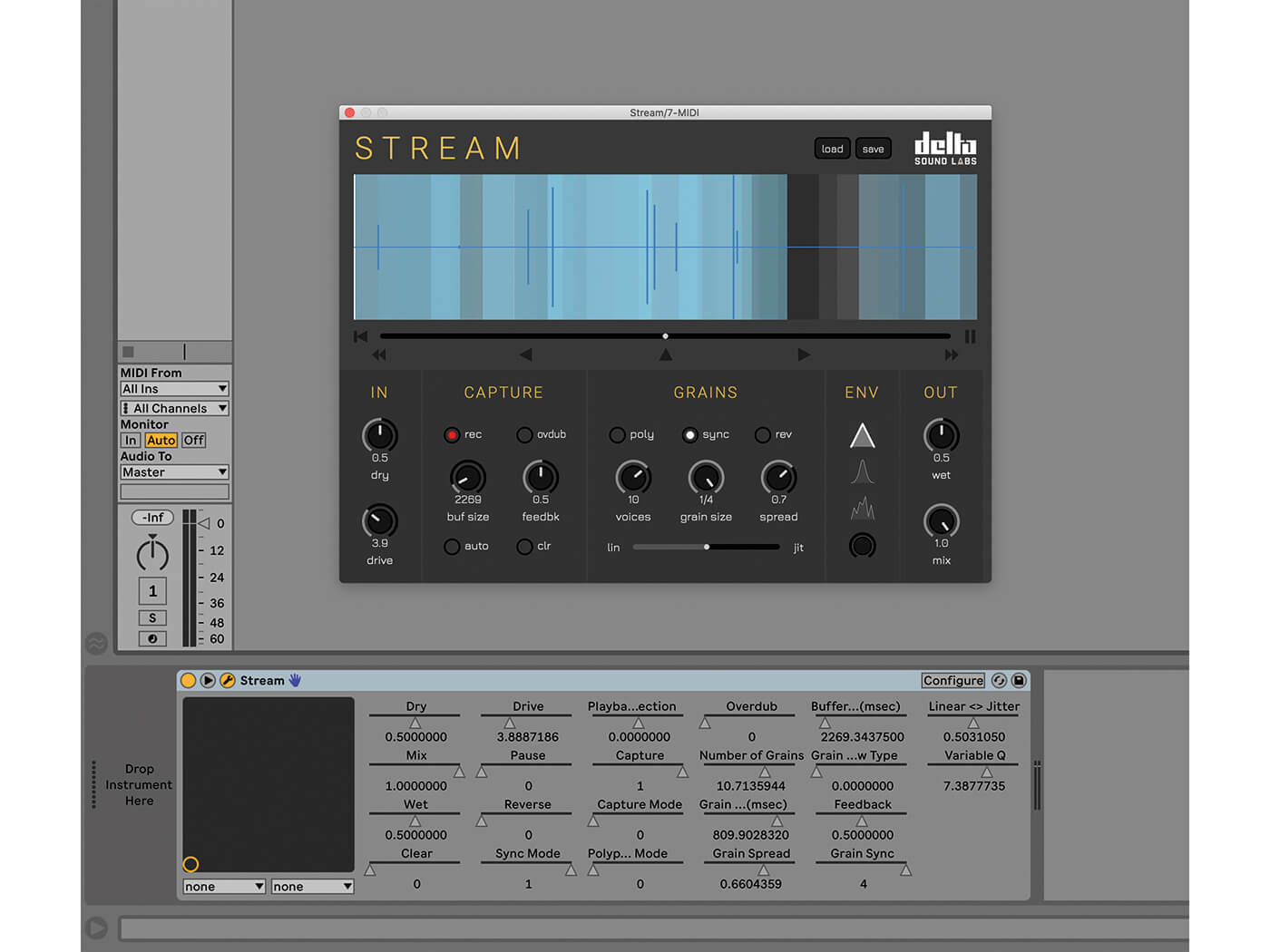 Stream is an affordable and simple-to-use granular-synthesis plug-in that’s as capable of far-out destructive textures as it is smooth and lush alternatives. Whether you need Stream depends on the plug-ins already in your arsenal and the ways you like to work. This is clearly a tool for sound designers and soundtrack composers.

It’s easy to get superb result from Stream, especially with its excellent factory presets. For deadline-facing pro sound sculptors and the like, this is a massive real-world benefit. Delta’s latest might also be a sensational tool for those who record and perform with ambient sound, and for those who simply must have access to every beat-mangling accessory on the market, it’s a must. 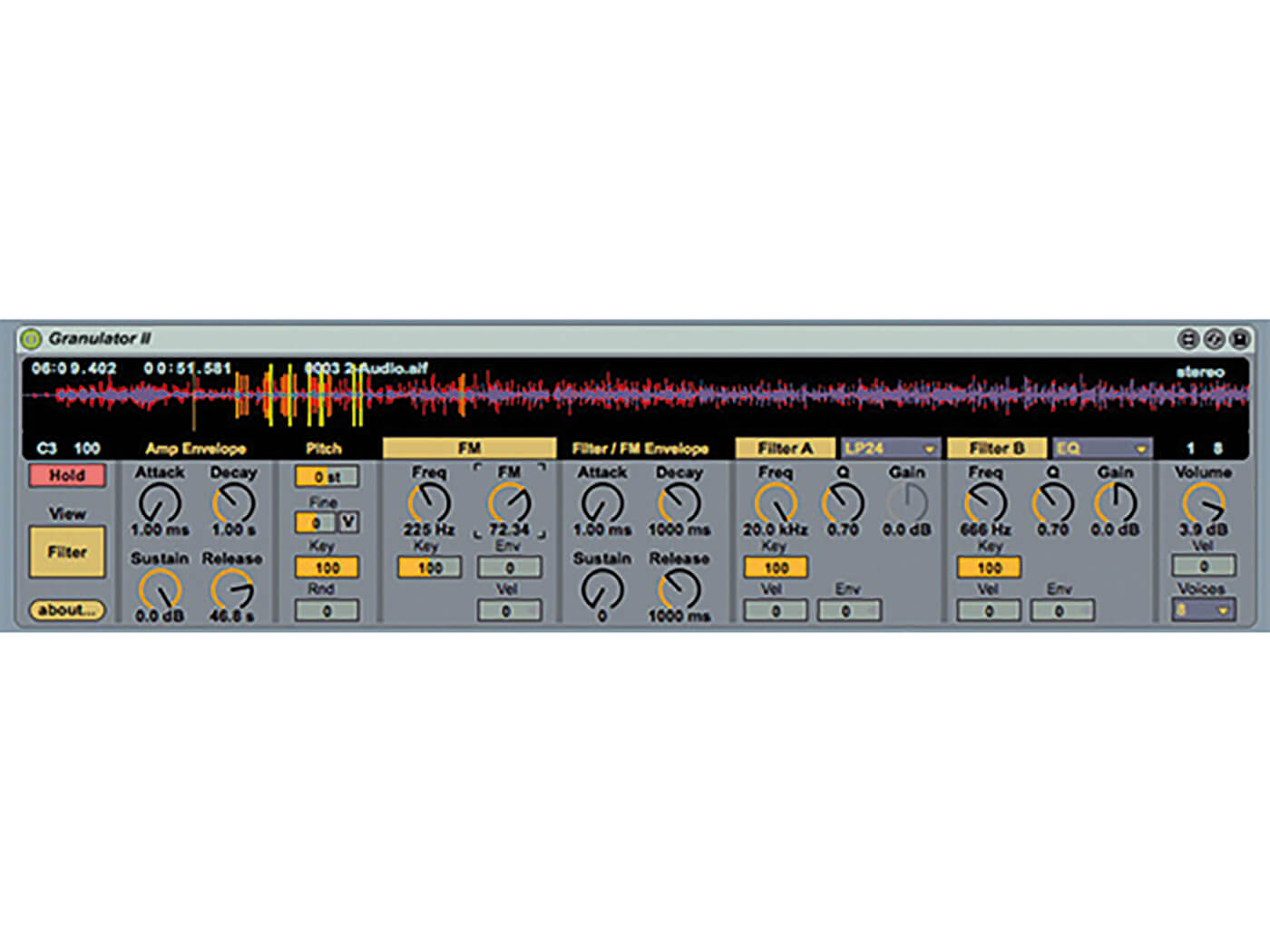 This granular synthesiser features frequency modulation and two filters. It loads into Live as a MIDI instrument rather than an audio effect, and has a distinct sound that’s quite different to Stream’s. 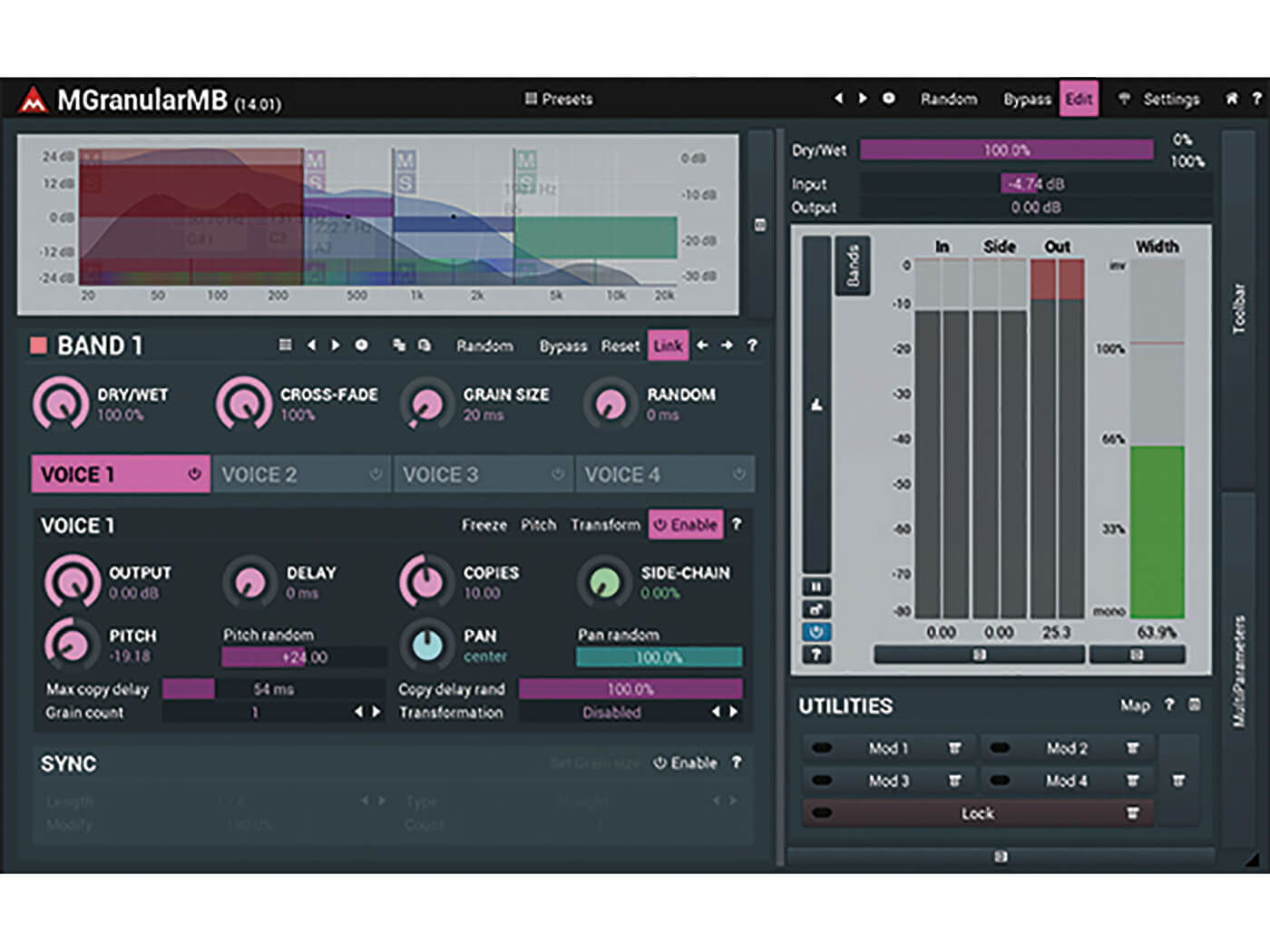 This granular synth for VST, VST3, AU and AAX includes six frequency bands, with up to 20 layers and plenty of modulation options, including an LFO, audio level follower, randomisation and a simplified interface option.