With Ensoniq’s classic 80s hybrid synth resurrected in plug-in form, does it capture the distinct sound of the original and is it worth including in your production palette? 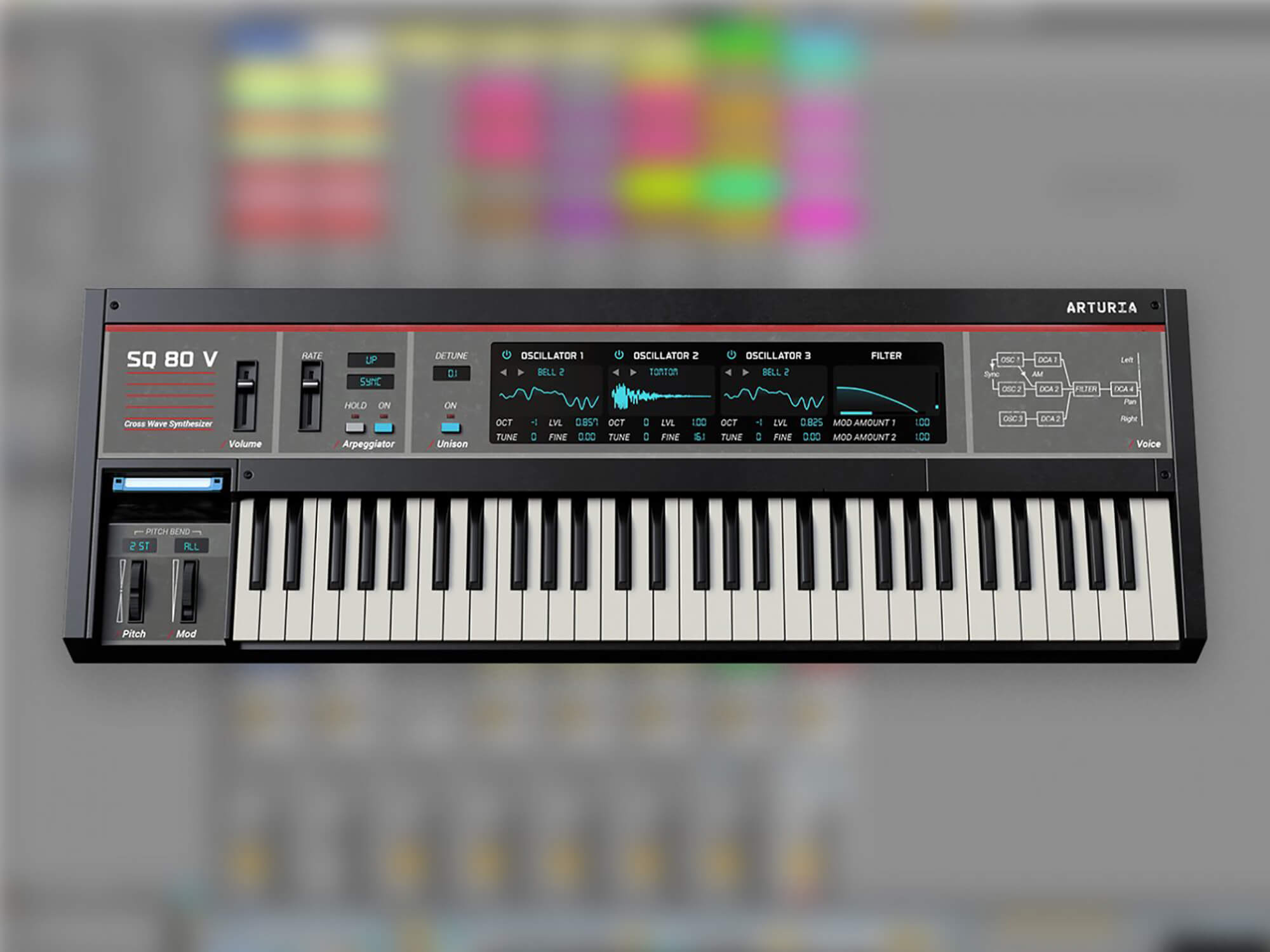 While the analogue revival is still in full swing, music-tech companies of all sizes have also shown great interest in revisiting digital and hybrid designs. Arturia’s SQ80 V is one such example. Will their digital reimagining of a mid-level 80s keyboard wow the contemporary user and fill an empty hole in their sonic armoury?

SQ80 V takes its design cue from the Ensoniq SQ-80, the successor to the ESQ-1. Ensoniq was set up by the design team behind the Commodore 64 home computer, which was also famous for the SID chip – a complete synth system on a single integrated circuit.

The synth company’s first success was with the Mirage 8-bit sampler. At a time when sampling was very expensive, the Mirage was superb value though somewhat unfriendly to use. It had eight voices of polyphony, with each shaped by an analogue VCA and filter. In the days before heavyweight computer DSP, this was commonplace even in the increasingly digital world of synthesis. 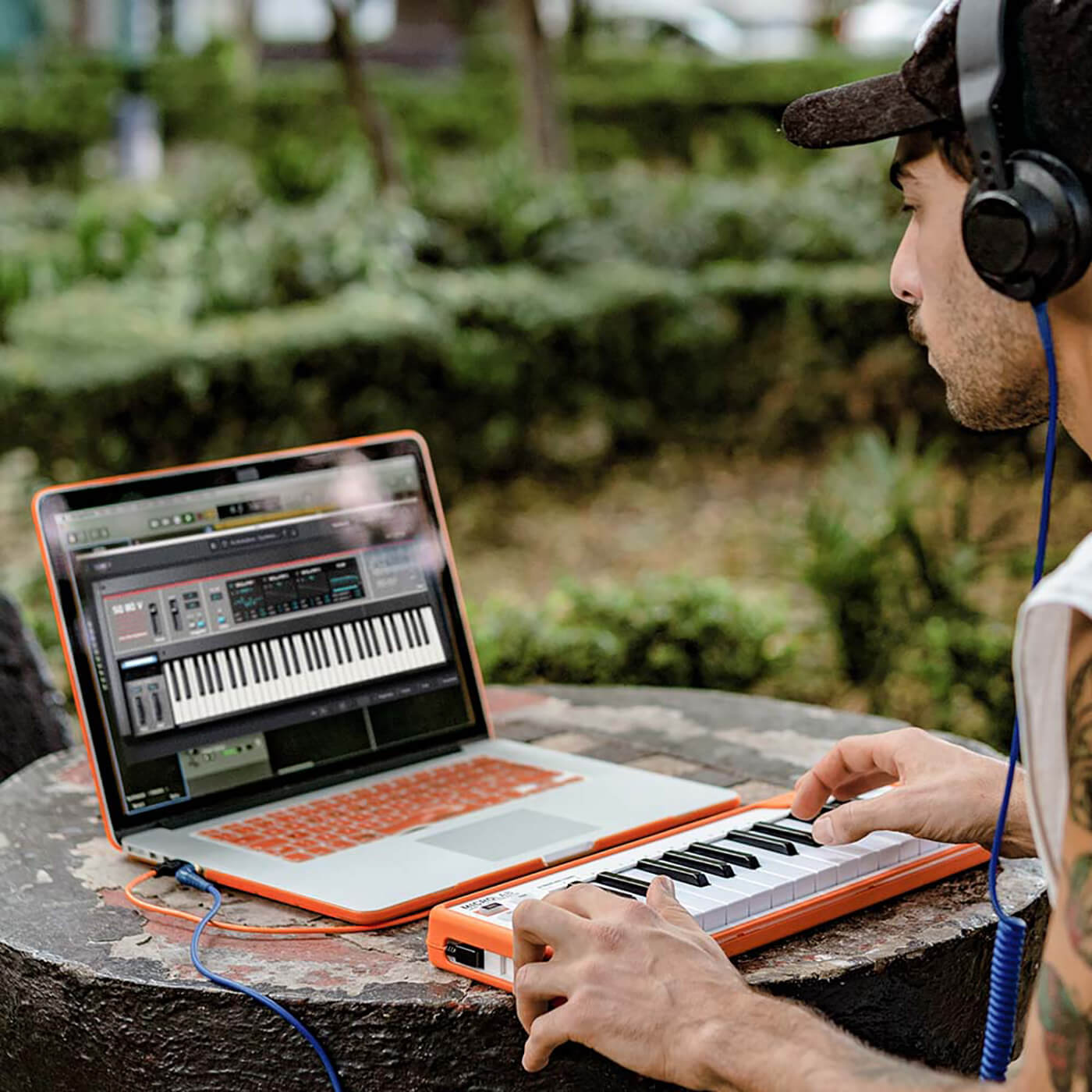 It is from here that Ensoniq’s SQ range took shape. Most commercial analogue synths were (and are) limited by the number and complexity of waveforms that their oscillators can generate. However, if the analogue oscillator is replaced by digital memory that can store and playback multiple complex waveforms (a bit like in a sampler), the range of sonic options is expanded considerably. The added benefit is that the common issue of tuning stability is removed.

Why the history lesson? Well, as these so-called hybrid designs embrace both digital and analogue audio elements, they not only defined an era of synthesizers, but they have an extremely distinctive sound; a composite of basic digital playback and analogue processing, and their related anomalies and artefacts. Keep this in mind when we explore the SQ-80 V.

One of the allures of the ESQ-1 (and the architecturally identical SQ-80) was the complexity of each voice. There are three oscillators, each with a similar set of waveforms to choose from. Alongside the usual control over pitch, you can sync the waveform start point of Osc2 with that of Osc1 (for squealing oscillator sync effects) or dial in controlled amplitude modulation (AM) between the two, which creates progressively harsher non-harmonic tones. 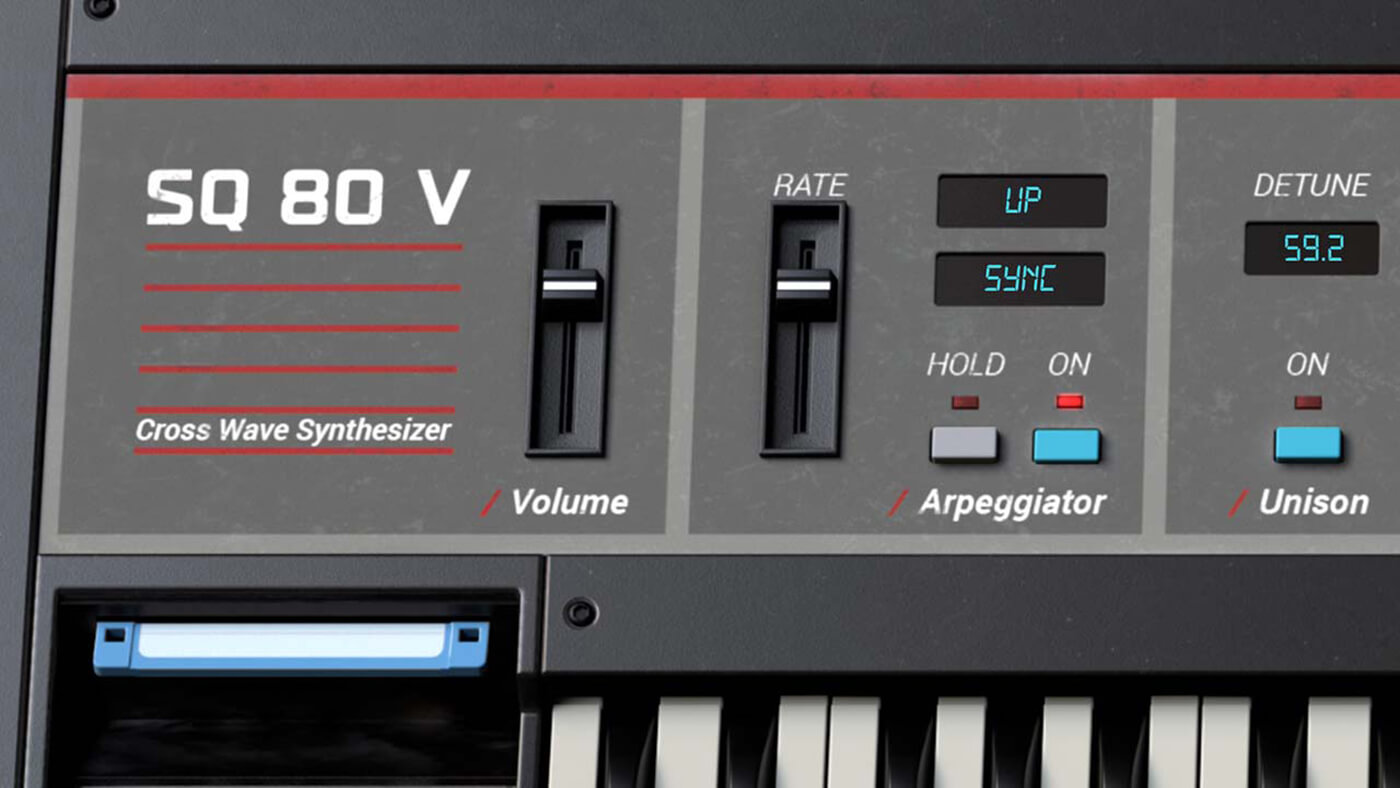 Besides the standard sine, saw and square waveforms, SQ80 V offers more complex shapes such as bells, voices, pianos and transients such as ‘click’ and ‘chiff’. There are even some one-shot drum sounds, revealing the SQ-80’s heritage as an early workstation keyboard.

In terms of sound quality, don’t expect immediate access to Kontakt-style realism. Waveforms are limited in length and sound quality, so you can hear audible looping on waves such as ‘breath’. Moreover, all have noticeable noise and aliasing due to the limited DA conversion spec of the original. However, this is exactly what you want in a recreation such as this, and the gnarly character was immediately comparable to my trusty ESQ-1 keyboard.

With three oscillator slots, the SQ80 V lets you layer a transient attack sound with looped sustained elements, to build more complex patches. And, for more versatility and other-worldly sounds, each oscillator’s amplitude and pitch can be controlled independently by the various modulation sources.

Arturia has included some ‘Hidden Wave’ banks that were originally generated by reading chunks of operating system memory. These are fantastically weird and glitchy.

There’s also a ‘Transwave’ section which includes morphable wavetables found on the Ensoniq VFX and others; perfect for evolving atmospheric timbres. These really add to both the oddness and depth of the SQ80 V sound generation circuitry.

After this melange of waveforms comes the ‘analogue’ filter section. The 24db/octave resonant low-pass filter is modelled on the Curtis (CEM) 3379, and the recreation is true to the original SQ-80. The only drawback is that it doesn’t offer the flexibility that a multi-mode design might bring. However, on a synth with so many wave shapes, this is not a particularly frustrating absence.

The original SQ-80 was surprisingly well-endowed in the modulation department. This is reflected in Arturia’s version with its four envelopes and three LFOs, each freely assignable to multiple parameters around the synth. Order is maintained with colour coding representing different modulation types. Assigning and controlling modulation sources is straightforward, but a matrix page for viewing all active modulation routing would have been welcome. Also, clicking on the small ‘+’ buttons to add new modulations is fiddly even at larger plug-in window sizes.

This largely rounds off the features that run in parallel to the original hardware. However, as expected Arturia has seen fit to enhance the synth in a few areas. The original 4-stage Level/Time envelopes can be switched to simple DADSR or complex MSEG (multi-stage) types – great for wavetable modulation. There’s also a unison mode with variable detune that’s great for thickening-up sounds, an arpeggiator, MPE compatibility and a Mod Mixer for combing two modulation sources in a range of ways.

Finally, the plug-in adds a 4-part effects section – something the original hardware lacked – which really helps add the necessary depth and space to the digital oscillators. The so-called Voice Dispersion section does allow you to dial in some variation between voices but this is limited to the filter and amp stages. It would have been interesting to see this extended to envelopes, oscillator pitch and even panning as well.

Fundamentally, the SQ-80 V does an excellent job of emulating the original SQ-80, and also offers enough new and worthwhile features to make this an exciting plug-in in its own right.

Those who already have Arturia’s Prophet V (including the hybrid VS) might find some similar ground being trodden, and one shouldn’t also discount the freeware SQ8L (though it is 32-bit, windows-only, old and no longer being updated). Owners of the original hardware may also be attracted by the ability of the plug-in to import original patch SysEx data, though amongst the 200+ presets included, there are some from the original included for good measure. 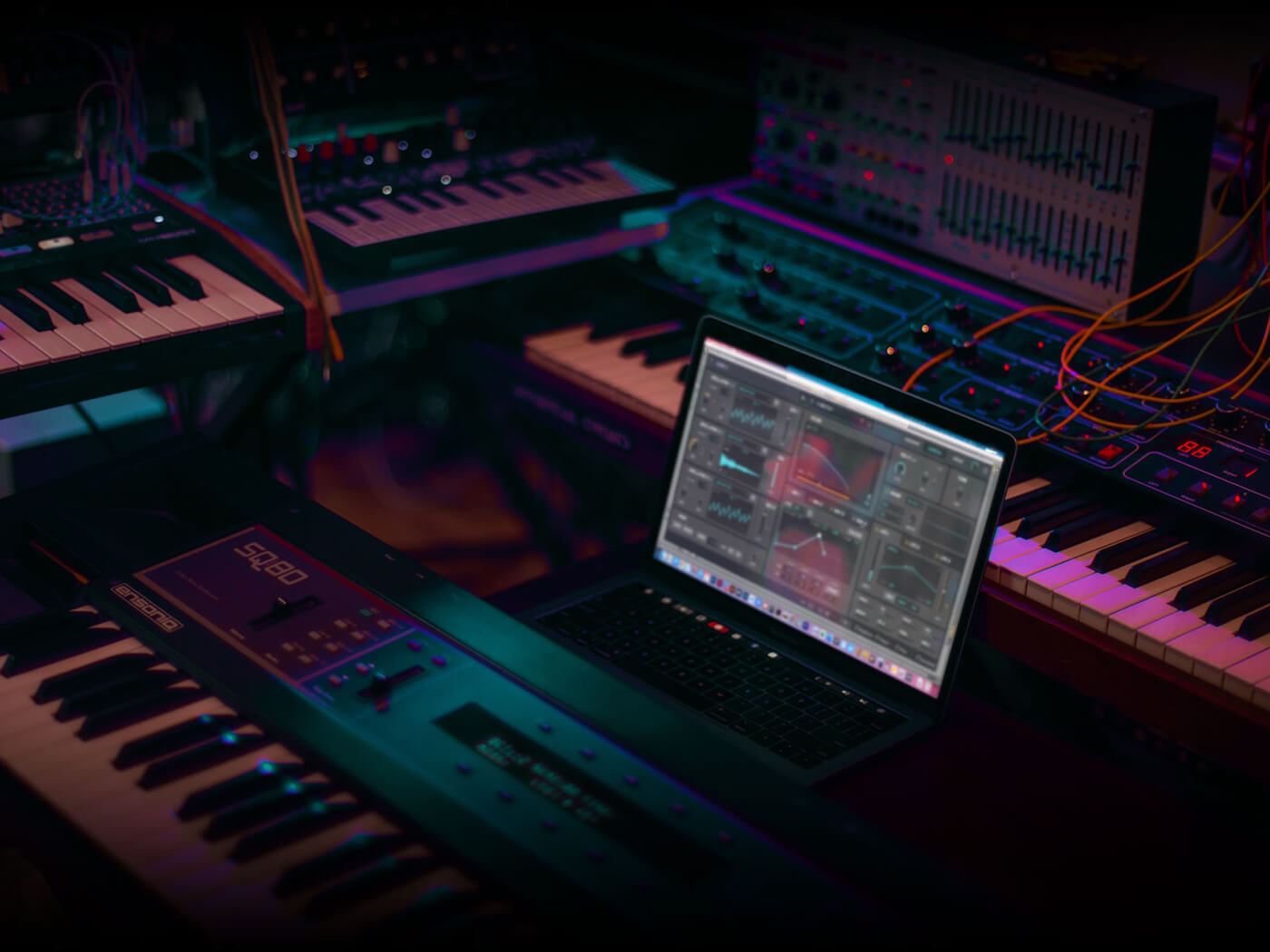