With a sonic palette this versatile, Pigments 3 promises to bring a whole new splash of sonic colour to your projects and productions. 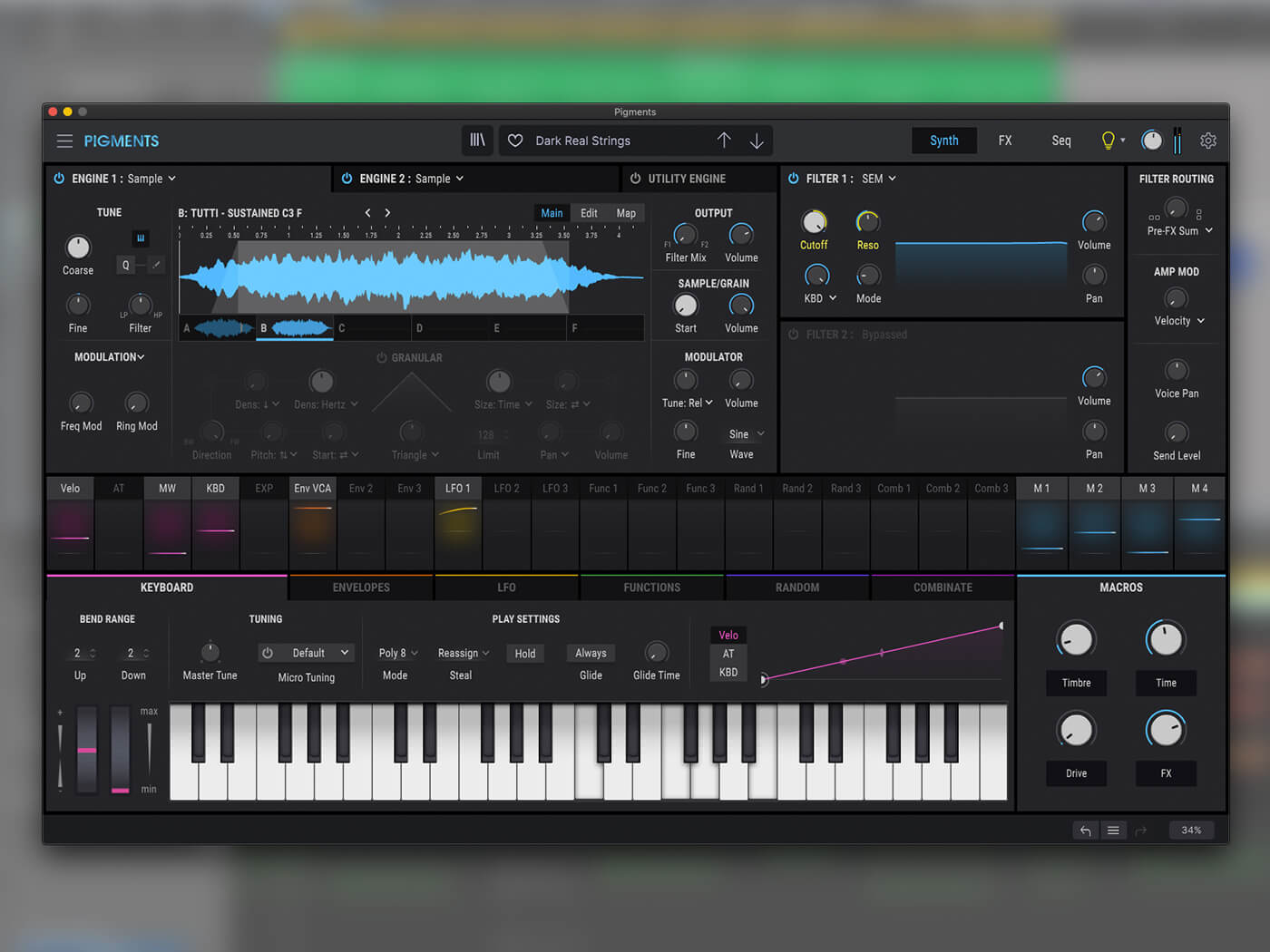 ⊕ Ludicrously versatile
⊕ A masterpiece of UI and UX design
⊕ An additive oscillator that’s easy to use – what witchcraft is this?
⊕ Extensive selection of modulation sources
⊕ Innovative, intuitive modulation routing and control

⊖ Having so many toys to play with can become overwhelming

This excellent update to Arturia’s super-flexible and chameleon-like soft-synth will become a go-to instrument for sound designers, musicians and producers alike.

Arturia has built an impressive catalogue of products in recent years: slick audio interfaces with innovative features, controllers for modular and traditional MIDI-equipped gear, and an ever-growing range of stunning analogue hardware synths. The company’s still going strong on the soft-synth front too. And the company’s not just focused on replicas of classic synths, either.

Their latest advance is Pigments 3, an update to Arturia’s so-called “Polychrome” software synthesizer.

At the heart of Pigments lies a pair of synth engines, each of which can operate in one of four modes: Analogue, Wavetable, Sample or, new in Pigments 3, Harmonic. The first of these is a powerful three-oscillator virtual analogue synth with FM and hard sync capabilities. It also sports a noise generator that can blend smoothly through three different colours of noise (red, white and blue), and be used as an FM source for the oscillators.

Wavetable is (no prizes for guessing) a wavetable synthesizer, and this has received an additional bank of 64 wavetables in this new version, focusing on metallic textures. In Sample mode, a Pigments engine can load up to six different samples, which you can trigger based on key range, velocity switching, round-robin, user selection, or just randomly. Furthermore, the engine allows the modification of the samples’ start, end and loop points, and features a granular synthesis mode, perfect for creating complex, constantly evolving pads and textures.

Finally, we come to the all-new Harmonic mode, which generates its sound using additive synthesis. Although notorious for being difficult to work with, Arturia’s take on additive synthesis is astonishingly easy to use and can be wonderfully expressive. Key to this is the Harmonic oscillator’s Spectrum section that imprints different patterns of amplitude variation on the oscillator’s partials (of which it can generate up to 512), thereby reshaping the oscillator’s spectral profile. You can also control the panning of the odd and even partials to create some unique stereo oscillator effects.

Alongside Engines 1 and 2, Pigments 3 gains a new Utility engine. This provides a pair of noise generators and an analogue-style waveform oscillator that’s perfect for adding a bit of analogue depth to a sound without giving over one of the main two engines to the task. The same goes for the noise generators, which are sample-based, with a varied bank of nearly 60 built-in noise samples available.

Each oscillator engine has an output section that allows you to balance the amount of signal fed to each of Pigments’ two filters and adjust the overall output level. In addition, you can amplify or attenuate the level, meaning you can overdrive the filter input a bit, which the filters respond to in a very analogue-like fashion.

The specific response depends on which of the ten available models a filter is using. The first of these is a multi-mode model designed exclusively for Pigments, and which offers 14 different modes – four slopes of low-pass, four of high-pass, and three each of band-pass and notch filter. Of the remaining filter models, some are taken from Arturia’s V range of instruments, with models based on iconic filter designs by Buchla, Moog and Oberheim, and a new-to-Pigments Roland Jupiter 8 filter. Others, such as the 64dB/octave Surgeon filter and the voice-like Formant filter, are more specialised in their function. 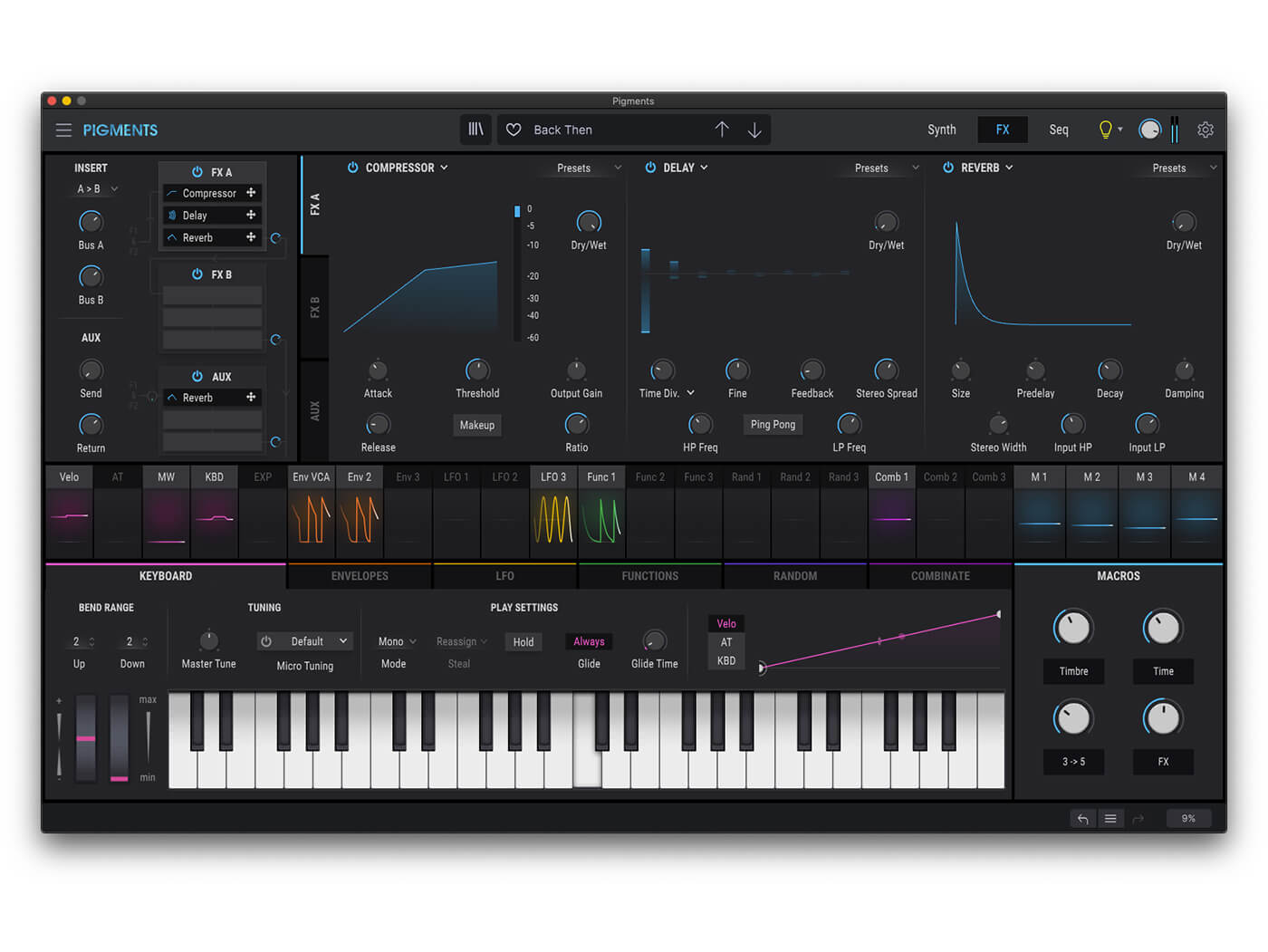 The filters can operate in summed or split modes. You can blend between series and parallel filtering when the filters are summed, making for some exciting tonal variations. The summed filter output is then fed to the FX section, where the two main FX busses can be arranged in series of parallel. Each filter sends its output to just one of the main FX busses in split mode, and the signals aren’t mixed until after those FX busses.

Alongside the main FX busses, which are essentially insert effects because they process the entire signal from the synth section, there’s an Aux bus. This is akin to an effects send. Each of these busses has three slots into which one of the 18 included effects can be loaded. These are standard studio fare comprising EQs, dynamics, distortion, delay, reverb, and modulation effects.

That might seem like a lot of different modulators to deal with, but Arturia has created a couple of super-intuitive methods of configuring modulation routing and strength. It’s also made a gorgeous way of visualising it through graphs drawn in the windows and rings drawn around the modulated knobs. Check it out in the video.

Finishing off Pigments’ impressive feature set is a built-in 16-step sequencer/arpeggiator. In sequencer mode, you effectively define the pitch relationship between each step. This then transposes based on the key you play. In arpeggiator mode, the pattern is generated directly from the keys you are holding down. Both modes have an additional five lanes alongside the pitch lane for controlling the velocity, octave, trigger probability, gate length and slide of each step. You can also set the step length of each lane independently, allowing you to make some fascinating polyrhythms. 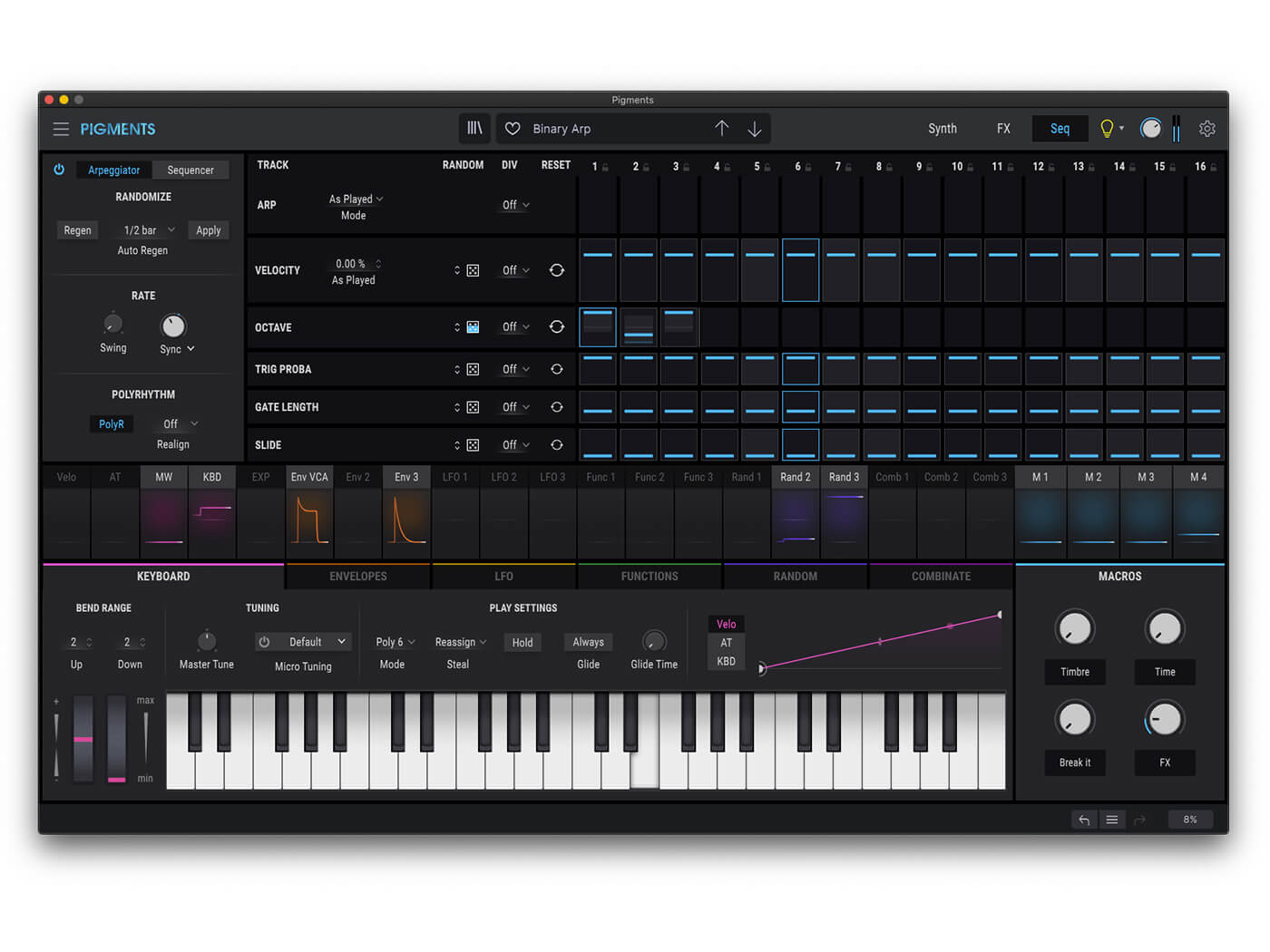 The sound of colour

Pigments is an exceptionally deep and powerful synthesizer, oozing with capability and flexibility. As such, the plethora of possibilities can be a bit overwhelming, especially when you first delve into the instrument. However, there’s a set of integrated tutorials that get you up to speed quickly, a hint system to keep you on the right track, and an interface that is a masterpiece of UI and UX design.

Given that three of the four engine models are based on digital synthesis techniques, it shouldn’t come as a surprise that a lot of Pigments’ presets have a digital edge to their sound. But Pigments 3 still retains the tonal expressiveness and subtlety of a subtractive synth. Of course, if a big subtractive sound is what you’re after, stacking a pair of Analogue engines and using the Utility engine’s oscillator quickly turns Pigments 3 into a seven-oscillator sub-synth monster. No matter what blend of engine modes you are using, the wide choice of filters, extensive modulation and top-notch effects make for a sublimely versatile synthesizer that’ll be as satisfying for sound designers as it surely will be for musicians and producers.