This 88-note controller boasts a beautifully playable keyboard and all the MIDI functions you can shake a stick at – is it the ultimate controller for studio and stage? 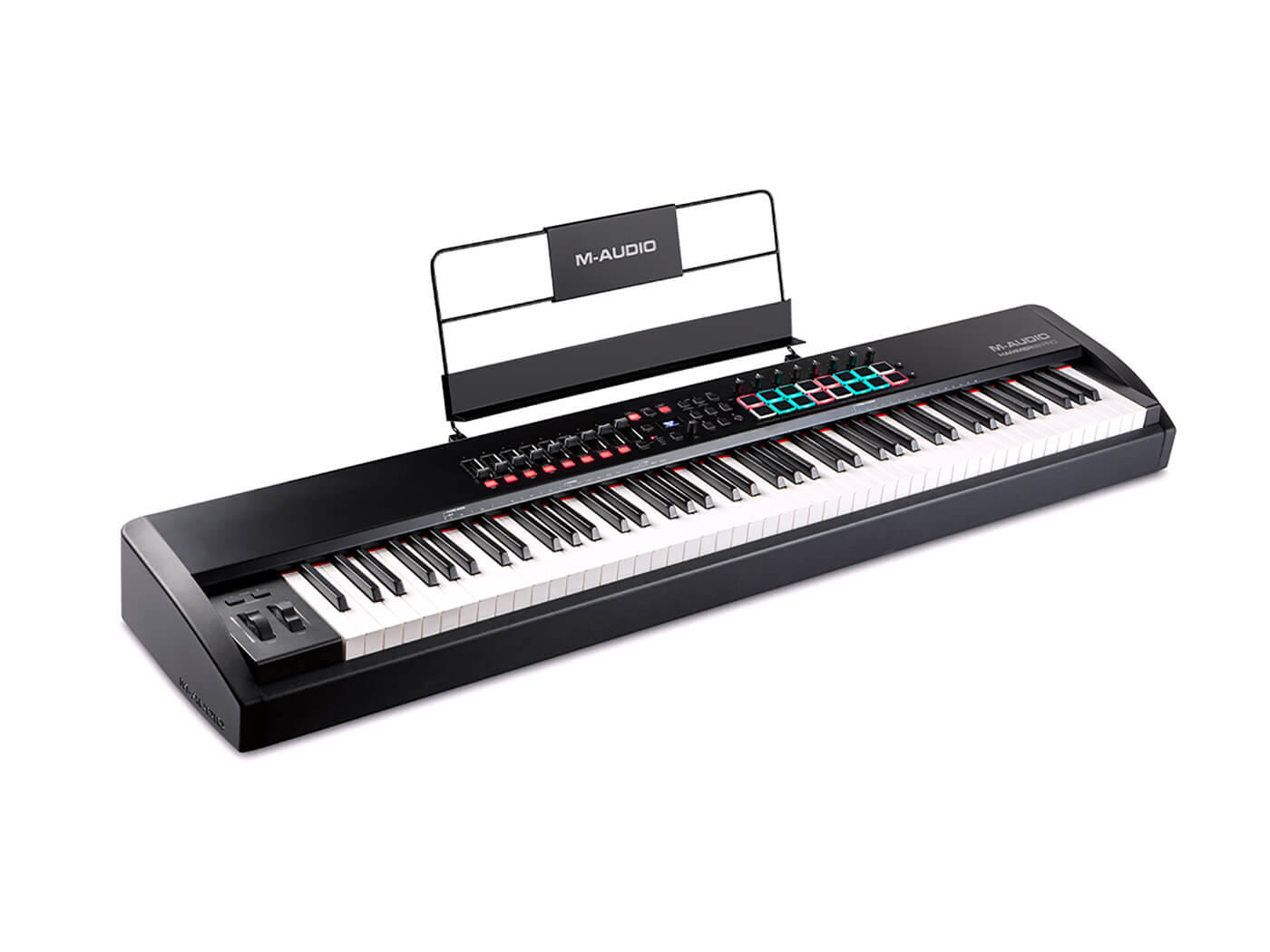 ⊖ Occupies a narrow market that won’t be for everyone

The Hammer 88 Pro surpasses its predecessor with a host of new MIDI functionality, creating a keyboard controller that is both pianistically expressive and fully geared up for digital music-making.

Press your fingers down on the keys of the Hammer 88 Pro, and you can instantly feel the weight and resistance that made the previous model, the Hammer 88, so appealing to performers who value pianistic authenticity.

For some, a fantastically responsive playing experience would already be enough to justify a purchase. However, with the Hammer 88 Pro, the feel and expansive playable range are coupled with a fully-fledged interface for MIDI control and innovative new features that we’ve previously only seen on M-Audio’s Oxygen range. 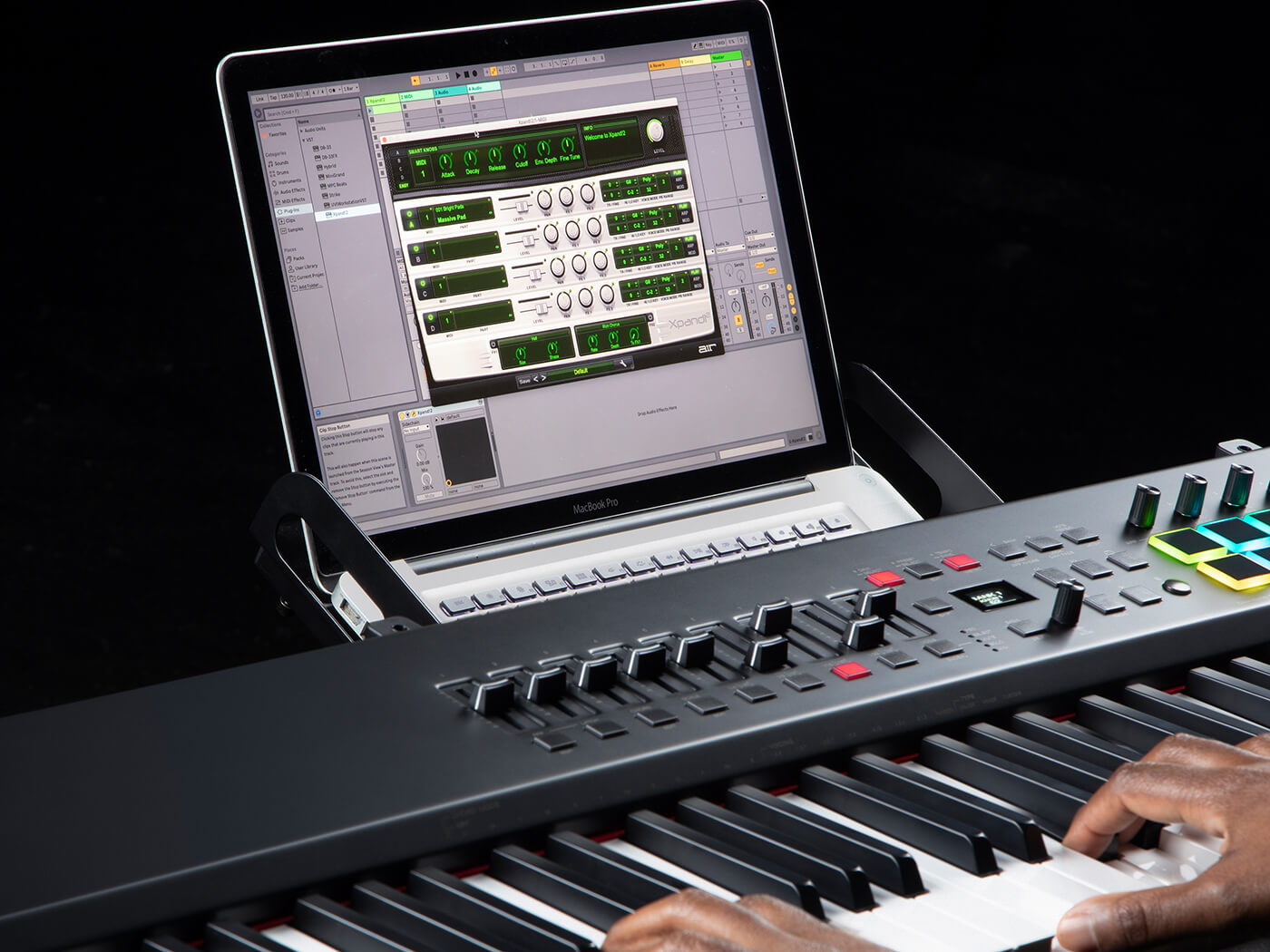 The core mechanical feature of the Hammer 88 Pro is its graded hammer-action keys. Designed to emulate the mechanics inside a real piano, these are the same keys that made the previous model, the Hammer 88, appealing to performers who value pianistic authenticity.

Weighing 18.5kg and stretching to 142cm, it’s not easily portable, and you will undoubtedly need a road case if you are planning on using this for live shows. Nevertheless, with this size and weight, you get a controller with robust build quality that will handle the bumps and knocks of touring.

Under the hand, the weight and resistance of the keys are very satisfying and create a fun and expressive playing experience. Coupled with Channel Aftertouch, the keyboard’s responsiveness provides stacks of potential for crafting nuanced melodic lines. 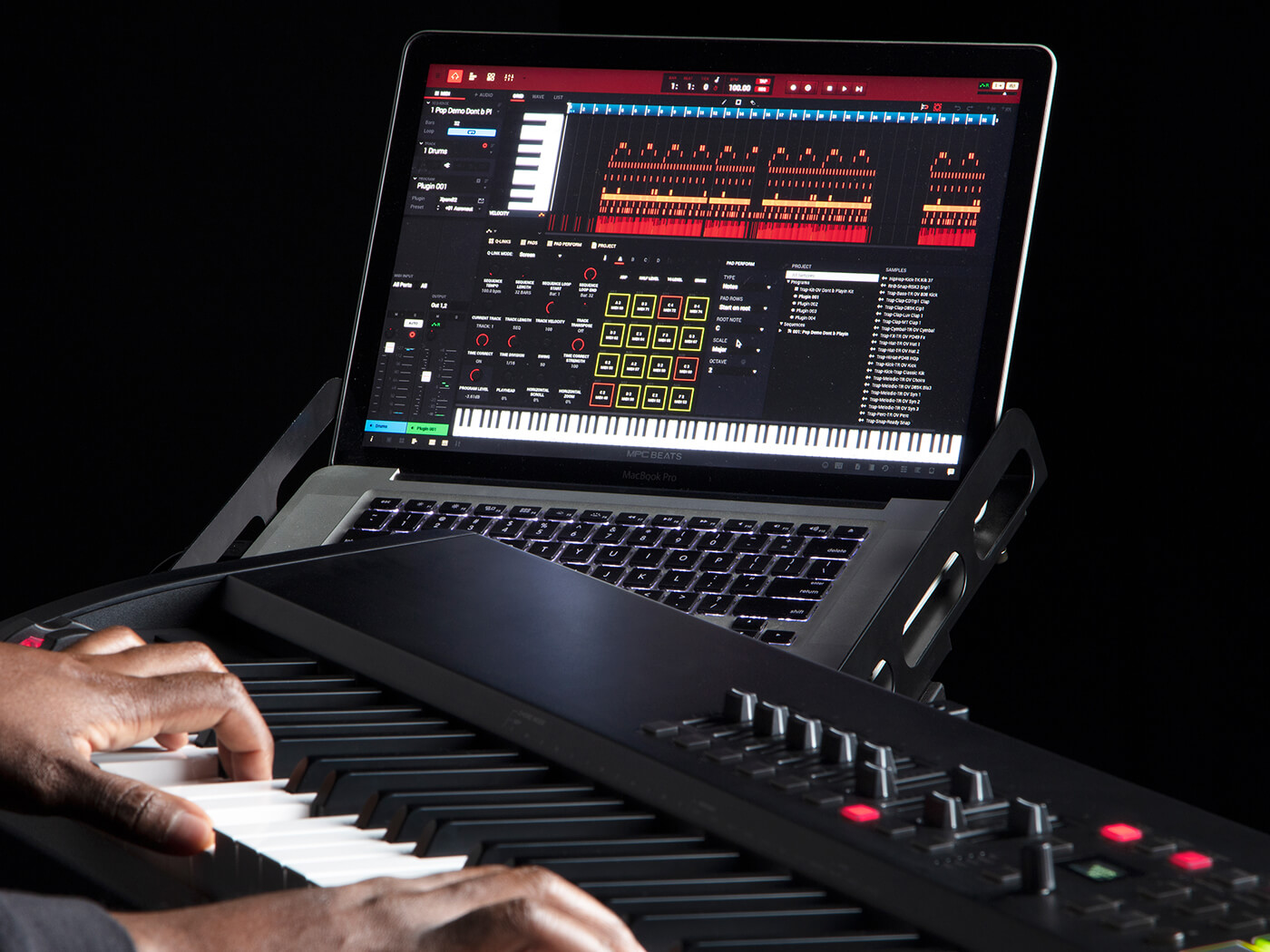 Moving beyond the keys, a metal panel folds over the top and back of the Hammer 88 Pro body to protect the mechanics, while the remaining sides and bottom are encased in hard plastic. On the left-hand side, there are the pitch and modulation wheels, which are both well-proportioned and very smooth to play.

In the centre of the controller is a small OLED display that shouldn’t be overlooked. It gives users the ability to edit settings from the piano and check in on parameters at a glance, and this meaningfully streamlines workflow. Other performance controls include nine faders, 16 velocity-sensitive pads, and eight knobs and buttons. Finally, transport controls include record and loop buttons, all of which have a satisfying feel.

Keeping a copy of transport functions on the keyboard means that you can reduce the time travelling between the computer and the instrument, ultimately leading to fewer interruptions when jamming to tracks or locking down parts for recording. Additionally, there are dedicated buttons for DAW select, Preset select, Tempo/Metronome, Note Repeat function and the new Chord and Scale functions. 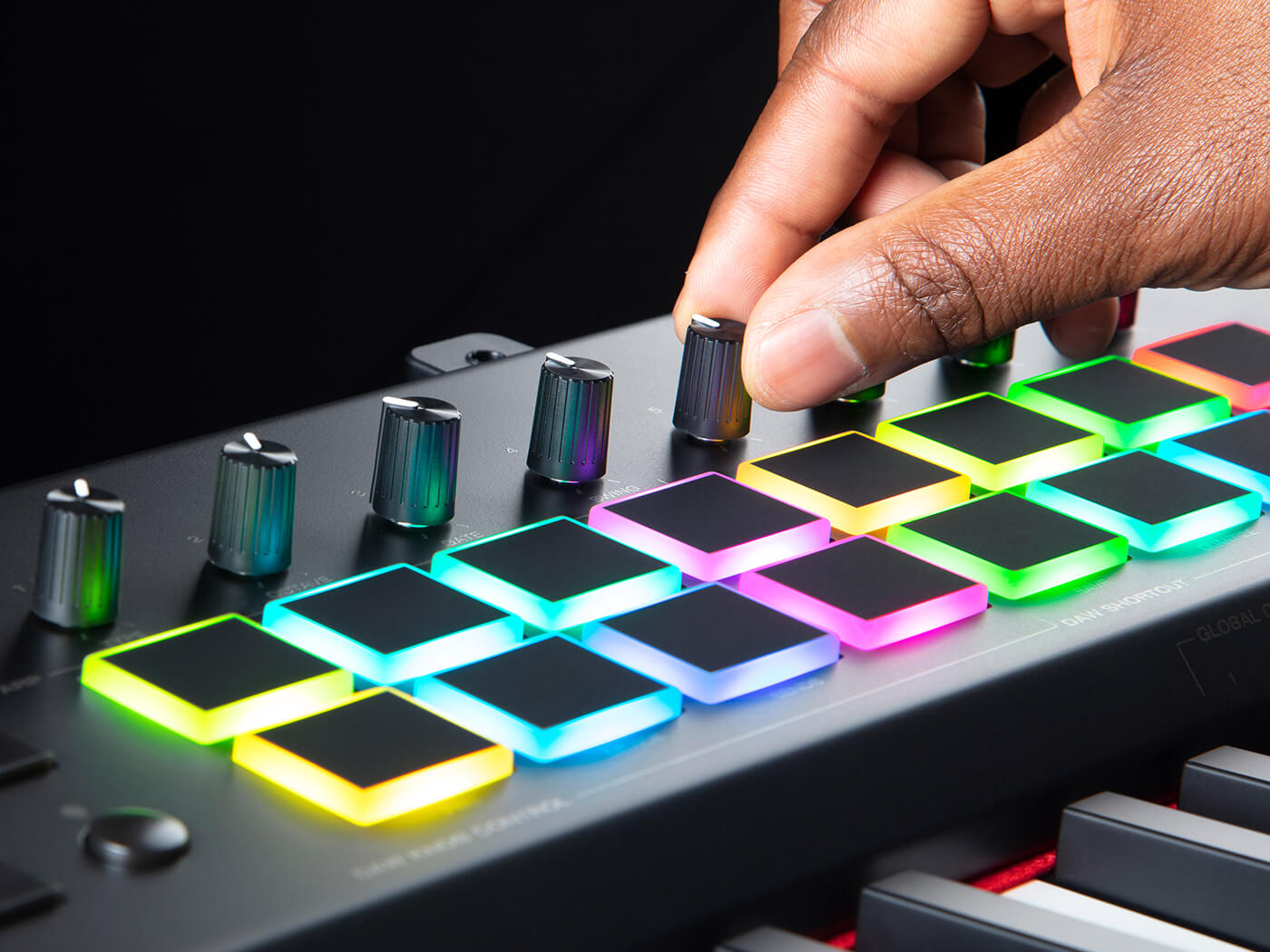 From studio to stadium

The Hammer 88 Pro has massively expanded on its predecessor’s feature set in both number and variety of performance controls on offer. The Hammer 88 had only basic MIDI functions. The Hammer 88 Pro adds a wide range of easily auto-mapped MIDI tools, making it ideally suited for experienced keyboardists who also want maximum control over their software instruments during performance or production.

For those familiar with M-Audio products, the design and function of the hardware interface have been mainly migrated over from the Oxygen Pro series, including the Chord and Scale technology.

The Chord function, at its simplest, allows you to play a full chord by pressing down just one key. Extending this idea further, you have the option to select the chord scale, voicing and type (for example, key of C, voicing 1,5,7, major scale). Alongside this, you have the option to set custom chords with up to six notes. After setting your custom chord parameters, you can play the chord anywhere on the keyboard with a single key.

Similarly, the Scale function lets you choose from various key signatures, including modal scales such as Dorian and Locrian. Once set and activated, you can haphazardly press any key on the keyboard, but you will only hear the notes of that scale. Instead of playing a ‘wrong’ note, such as a B♭  in a C major scale, you will hear the closest corresponding note in the scale, which in this case would be a repeat of notes B or A.

Even for seasoned producers and players, Scale mode is a worthwhile safeguard against inputting wrong notes into your recording session and ultimately reduces the need to go back and edit MIDI performances. As a live instrument, the Chord and Scale features might have exciting applications for electronic musicians who want to experiment with performing or improvising.

These modes are quick and easy to access and switch on with a press of a button. If you’re not a pianist, they will be even more valuable, helping when you’re playing around with ideas and recording them into a session. Alongside these ‘smart’ features, you also get useful staples like Note Repeat, an Arpeggiator, assignable keyboard zones, velocity-sensitive pads and no less then three footswitch pedal inputs and one expression pedal. 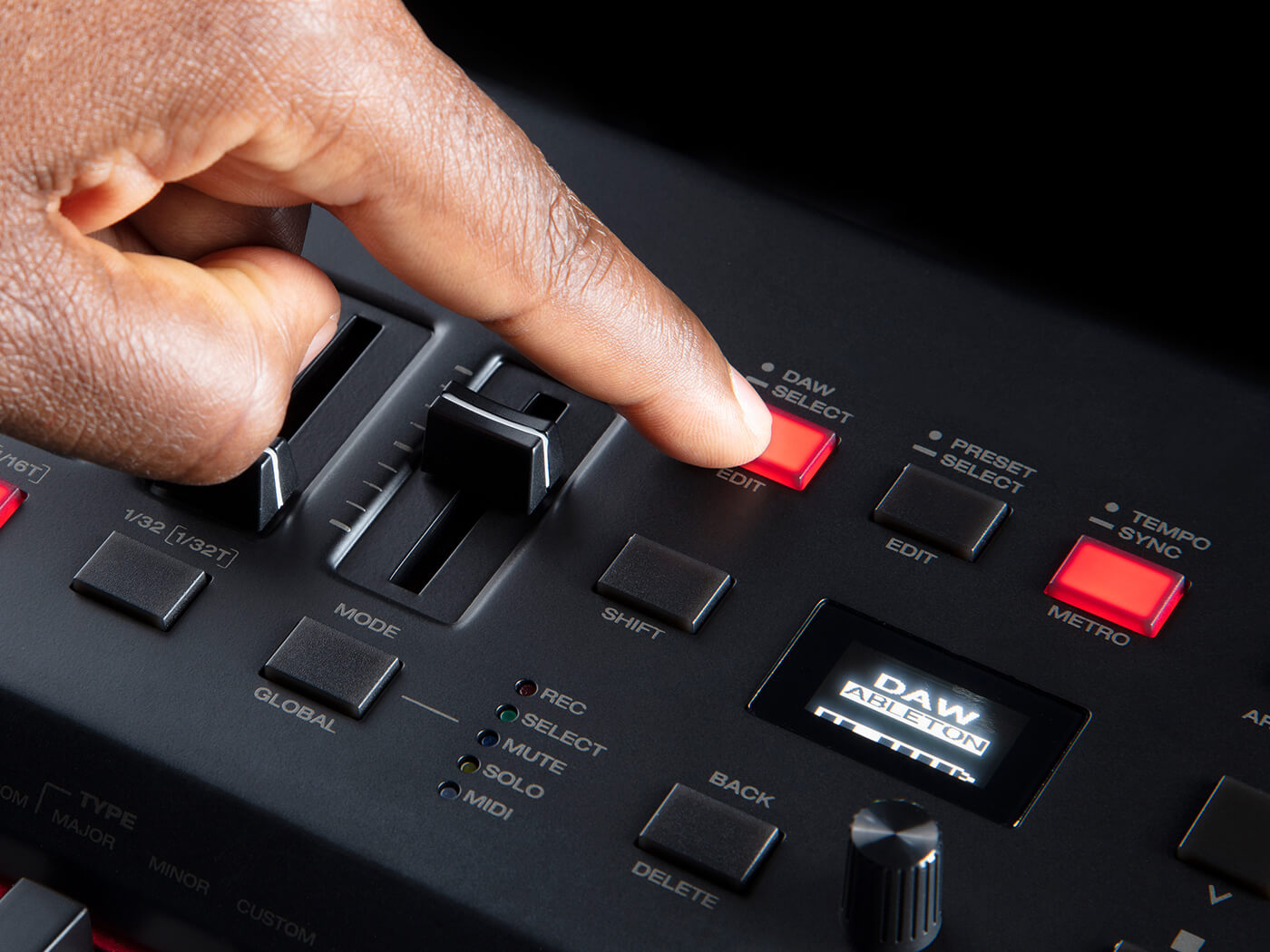 If you’re looking for a controller that will feel as at home in the studio as it will on the stage, then it’s hard to think of what more you might want in a keyboard. The Hammer 88 Pro is brimming with functionality and playability, but it’s the 88 fabulously weighted hammer-action keys that stand out and justify the price point.

Considering the weight, design and expansive controller functions, the Hammer 88 Pro comes together as a sleek and elegant beast. M-Audio has integrated the advanced MIDI controllers from their Oxygen Pro series with the minimalist design of the Hammer 88 predecessor, all in an effortless and pleasing way.

It’s unlikely that everyone will require this keyboard’s highly specific blend of performance and production capabilities but, for those who do, the Hammer 88 Pro bridges the gap between instrument and software controller in a way that few other products do. 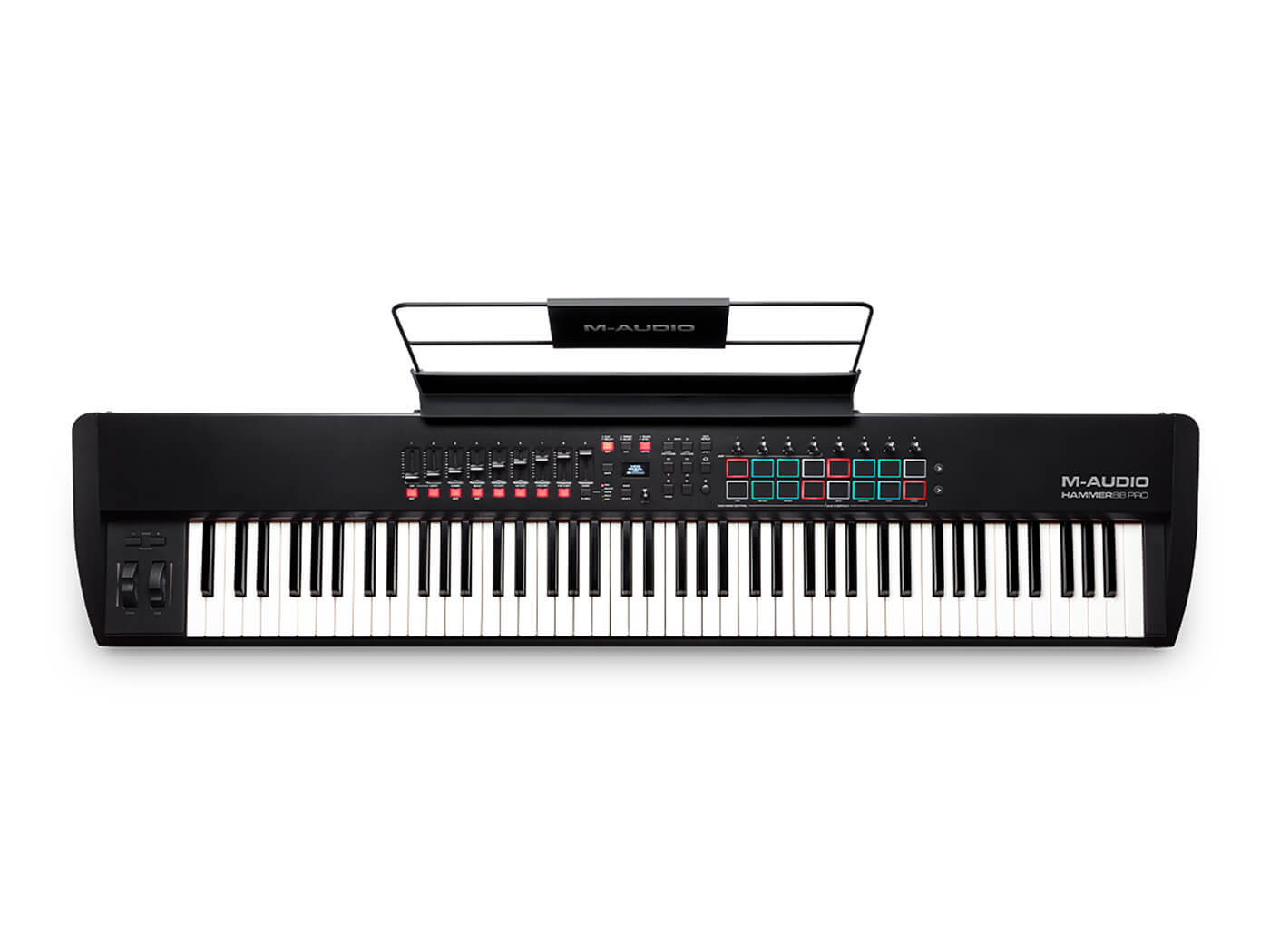