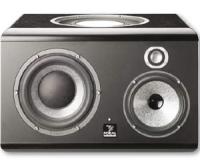 The SM9 is billed as two independent monitor systems housed in a single enclosure. On the one side there’s a two-way monitor with a 6.5-inch bass/midrange driver and a 1-inch pure beryllium tweeter. On the other side there’s an 8-inch bass woofer with an 11-inch passive radiator. The fun part is that you can switch between the two-way system and the full system, where all four drivers are in play. 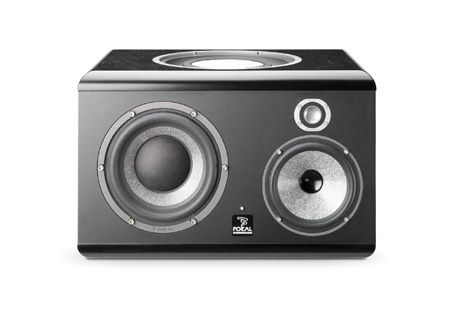 The SM9 has numerous frequency response adjustment controls, which we’ll describe a bit later on. There’s even an EQ in/flat response switch, conveniently located next to the half-/full-system switch and the standby switch located on the side of the cabinet. As one SM9 owner observed: it’s almost like having four monitor systems in one. And at 35kg each they weigh about as much as four monitors, and measuring 320 x 490 x 390mm they take up almost as much space.

The quoted frequency response of the SM9 is impressive, ranging from 30Hz to 40kHz with all drivers engaged. We can’t comment about the upper frequencies because we’re merely human, but test tones were clearly audible below 30Hz. With 400 watts driving the woofer and 200 watts evenly distributed between the bass/midrange driver and the tweeter, you’ll soon identify any loose fittings in your room.

An XLR socket is provided for balanced audio input along with a -10dB/+4dB sensitivity switch. First up is the High Pass Filter, with the Full Range position disabling the HPF. The filter slope for the three other positions (45Hz–60Hz–90Hz) is 12dB/octave.

Our expectations were high and the SM9s didn’t disappoint. Essentially they sound like utterly superb nearfield monitors – but without the usual missing frequencies. If your studio already has a pair of soffit-mounted big monitors, the SM9s could make them all but redundant. Basically they eliminate the guesswork.

Besides listening tests involving our usual test tracks, we used the SM9s during a couple of microphone reviews. The mic in question was a repro of a classic Neumann, and we had a genuine vintage Neumann on hand for comparison. Listening through our regular monitors, the two mics sounded almost indistinguishable, but switching over to the SM9s revealed subtle differences in the high-frequency response. The acoustic image was so solid that the mono signals seemed to be coming from a centre speaker.

Next we decided to try some mixing. Recalling a recently completed mix in Logic, we embarked on some fine-tuning. Through the SM9s it seemed that the bass could come up a tad, along with the drum overheads. The lead vocal also exhibited occasional sibilance. The adjusted mix was burned to CD along with the original to compare on a variety of systems. Bearing in mind that we had been happy with the original mix, it has to be said that the minor alterations the SM9s had prompted us to make improved it. The SM9 mix simply translated better.

While low frequencies are said to be non-directional, hearing ultra-low frequencies from the SM9s at ear level rather than feeling them in your chest takes some getting used to. The sensation is odder still when you’re standing up. Besides that, we have nothing negative to report about these speakers. The imaging is surgically precise, the effortless transparency is world-class and they’re a pleasure to work with.