sE’s 2200 models have long been its best-selling products. Now there’s
a new one. Huw Price sounds it out. 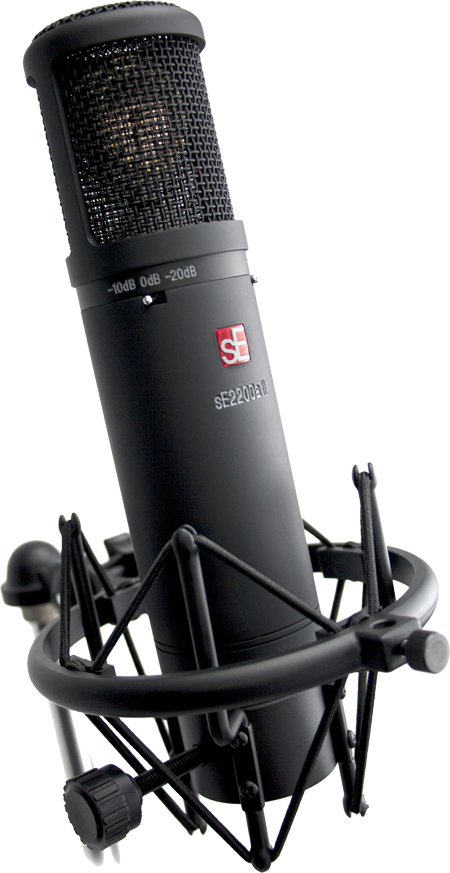 Although labelled ‘II’, this is actually the third incarnation of sE’s sE2200 condenser microphone. The first version debuted at the turn of the century, and the II version sees the addition of figure-8 and omni patterns to the stock cardioid. A -20dB attenuation pad option has been added to the -10dB and 0dB settings and the bass roll-off switch (with the still-unspecified frequency point) remains.

To facilitate pattern-switching the sE2200a II has a hand-crafted, 1-inch gold-sputtered diaphragm based on the original sE2200a capsule with a centre-tapped rear diaphragm (customer feedback apparently prompted the development of this multi-pattern version of the original 2200a). Bringing the looks bang up to date, sE has opted for the black rubber paint finish that matches several of the other microphones in its current catalogue. As well as being reflection-free, tough and chip and scratch resistant, the substance helps to dampen chassis resonance.

As an introductory offer the sE2200a II comes with a matching shockmount and metal mesh pop shield. A hole at the front with a small thumbscrew accommodates the pop shield (supplied), and a thumbscrew mechanism similarly secures the mic in the shockmount.

Many of the best microphones have remained in production more or less unchanged for 40 or 50 years, but some companies seem to think that a revamp or facelift has to be scheduled every few years. The sE2200a has won the Music Industry Association (MIA) award twice and we have been fans ever since we reviewed it back in the dark ages, so we were somewhat apprehensive as well as excited about the sE2200a being updated.

It’s with some relief we can report that we still like the sE2200a. In fact, we actually like it better because it offers so much more than the original without compromising the qualities that made it one of our favourite low-mid-price condensers in the first place.

The 2200a II is still a bold-sounding microphone with a pleasing degree of detail, a hint of sE’s trademark high-frequency sparkle, and just enough midrange colouration to provide character without dominating the sound or detracting from the natural tone of a voice or instrument. In particular, the cardioid setting’s midrange has a slightly larger-than-life quality that can flatter many vocalists and bring additional body to thin or underpowered instruments.

In omni mode the character is very open, displaying breathy highs and deep bass. Figure-8 has a slightly lower output and the midrange is more coloured, with a thinner, scooped quality. This may actually prove useful for mid and side stereo setups. We also achieved good results by switching from cardioid to figure-8 to reduce proximity effect in close mic’ing situations rather than engaging the bass roll-off.

The fact is that the sonic characteristics of the 2200a II remain as good as the original. This may determine whether you think it’s worth paying more for the 2200a II or buying an original 2200a. If you’re happy to stick purely with cardioid it might not be, but either way, if you fancy an sE2200a with extra versatility the 2200a II won’t disappoint.

WALK ON BY
If cardioid-only isn’t an issue

If you’re already a fan of the original 2200a but need extra patterns, the 2200a II Multipattern won’t disappoint.