Is sE’s new version of its multi award-winning reflection filter out of this world? Mike Hillier prepares for lift-off… Details Price: £299 Contact: Sonic Distribution – 0845 500 2500 Web: www.seelectronics.com Controlling the ambience on a signal is one of the key jobs of any tracking engineer. Even in great-sounding rooms engineers will likely pull out a […] 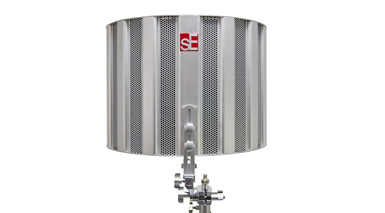 Is sE’s new version of its multi award-winning reflection filter out of this world? Mike Hillier prepares for lift-off… 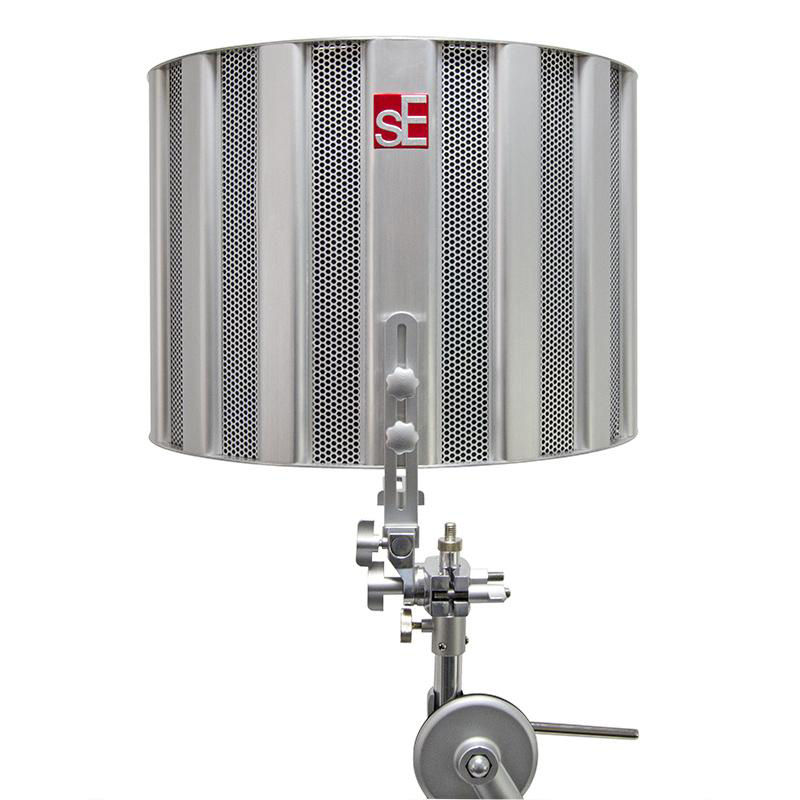 Controlling the ambience on a signal is one of the key jobs of any tracking engineer. Even in great-sounding rooms engineers will likely pull out a bunch of baffles to control the ambience as they are recording. But for many small studio owners, having large baffles on hand when you need to close down the reflections is not an easy option.

The original RF Pro sought to ease this problem by creating a portable solution that could be quickly set up and positioned to reduce room reflections while capturing a stunning clean, dry performance. Now, eight years later, sE has taken another look at the reflection filter and come up with the SPACE (Specialised Portable Acoustic Control Environment). 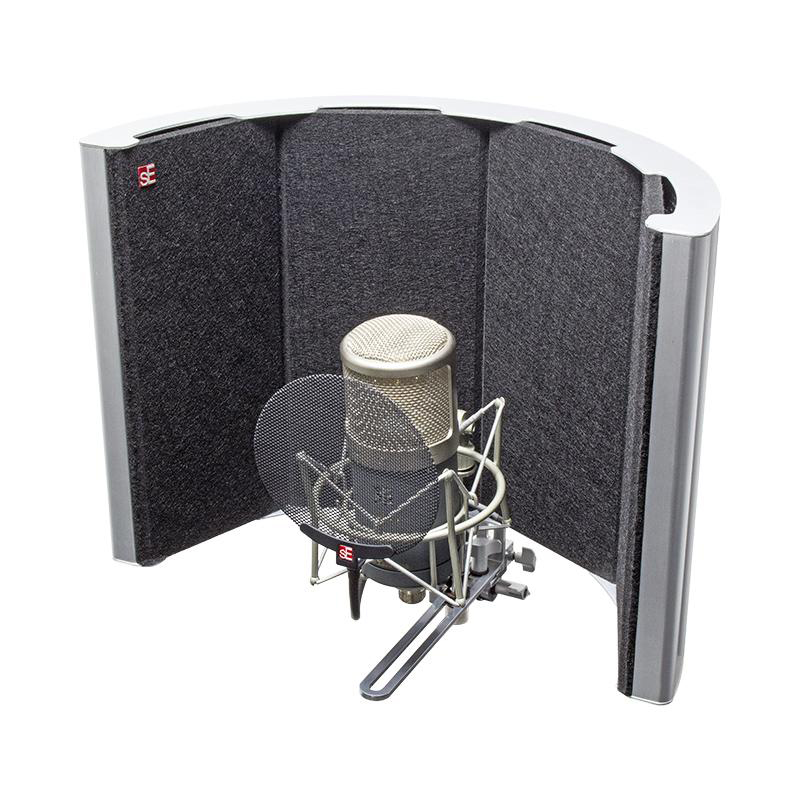 Rocket Science
The SPACE takes the basic concept of the RF Pro’s multiple layers and air gaps and extends the surface area to envelop more of the microphone and prevent a greater degree of room reflections from reaching the microphone. The design uses ten layers of sE’s patented Multi-Layer Air Gap technology material with seven vertical pillars. These pillars deepen the air gaps, capturing more low-end material and adding some random diffusion. Compare this with many of the alternatives, which usually consist of nothing more than a sheet of foam, and you can see that sE has really put a lot of work into the Reflection Filter range.

In order to make SPACE a more useful and easy-to-use tool than the previous models, sE has redesigned the mounting mechanism. The clamp can now be tilted and locked at an angle, making it easier to use the SPACE as a filter around instruments as well as on a vertical stand for vocals.

However, because of the nature of putting the enclosure around the back of the microphone it still works best with side-address mics (which hang vertically) rather than end-address units, which tend to start poking the back of the chamber, especially when you add the XLR connector. 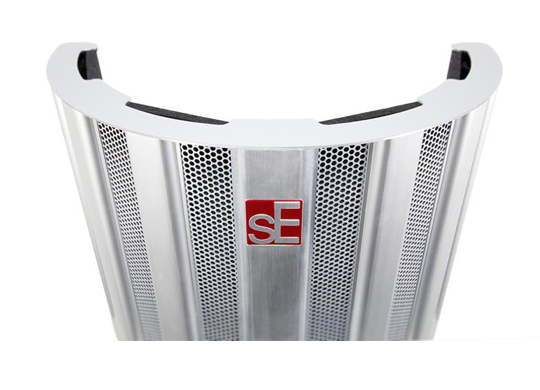 No-one Can Hear You Scream
We started our testing with a vocal in an already fairly well-controlled room. The difference was subtle but still noticeable without any processing on the vocal, and it became more apparent as we started to apply a little compression to the signal. With the RF SPACE in place the compressed signal retained its close, dry, intimate emotion; without it, the compressed signal brought up the room, placing our vocal just a touch further back.

Switching from our treated control room to the kitchen – a very live room with a tiled floor and plenty of flat wooden surfaces – the difference between recording with the RF SPACE and without it became more obvious. The live room sound can be a great trick, and we’ve often used it for exactly that reason, just as we’ve heard of other engineers using bathrooms or purpose-built stone rooms for similar effects. 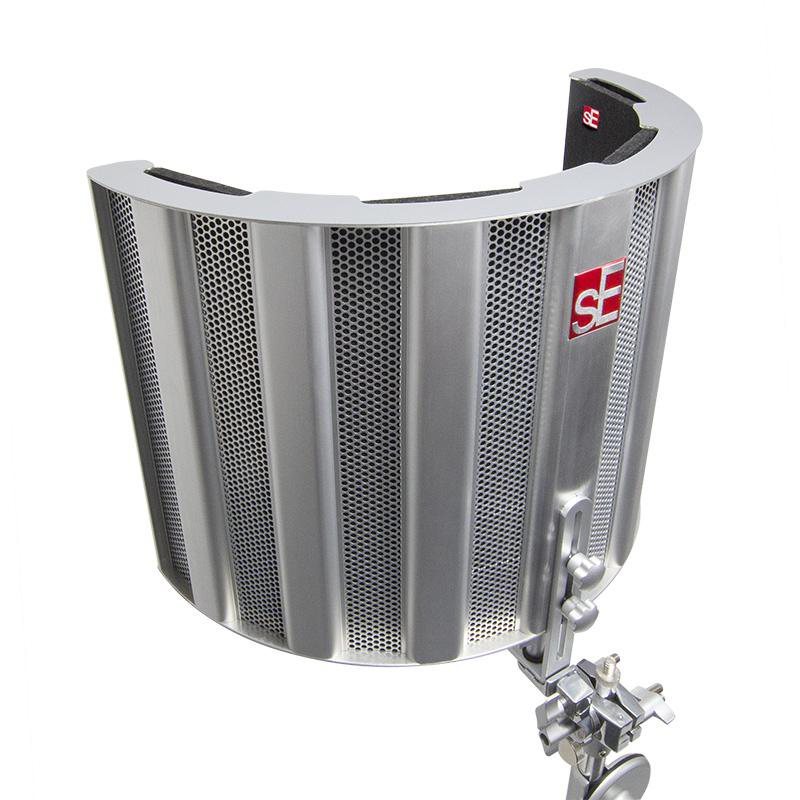 However, with the RF SPACE the room took an altogether different vibe and we were impressed at how much the room was controlled. It still wasn’t as dry as the controlled room with the RF SPACE, though, which shows you that even with the filter in place the room is still going to have an impact. However, it did take much of the life out of the room and would have made it easy to place as a dry vocal, as opposed to the obviously live version without it.

Switching to acoustic guitar, the option of being able to angle the RF SPACE made it easy to place and angle the mic at the guitar without too much hassle. We like to use sE’s RNR1 Rupert Neve ribbon mic on acoustic guitar, which has a figure-of-eight polar pattern. With the RF SPACE the signal we captured was clean and clear, with a more direct, focused sound than without it. Because the filter prevents signals from hitting the walls and bouncing back onto the rear of the ribbon, the figure-of-eight capsule sounded more like a cardioid but still had all the gorgeous qualities we’ve come to love of ribbon mics. 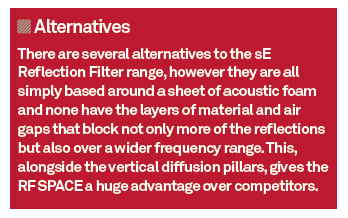 The Final Frontier
The RF SPACE does a great job of cutting down room reflections. We’re often telling you the importance of room treatment with respect to mixing, but the tracking environment is important too – arguably more so. If you record in a project studio where the room acoustics are less than perfect this is an almost essential purchase. But even in studios with fantastic treatment and portable baffles, the ability to quickly switch the acoustics makes this a great addition. 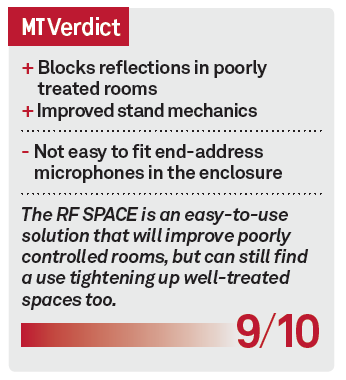 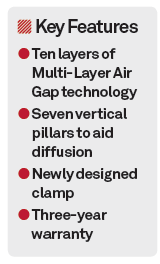