Denon has a long-standing history as a manufacturer of CD decks that goes back to 1993, which saw the launch of the company’s rack-mount industry standard, the DN-2000F. But as CD decks evolved, Pioneer took the lead and started developing tabletop models, and the legacy of the CDJ-1000 club standard was born. Now, though, Denon […] 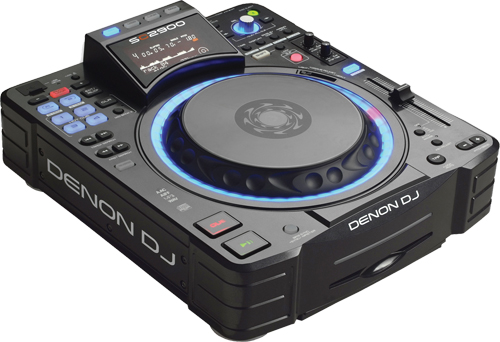 Denon has a long-standing history as a manufacturer of CD decks that goes back to 1993, which saw the launch of the company’s rack-mount industry standard, the DN-2000F. But as CD decks evolved, Pioneer took the lead and started developing tabletop models, and the legacy of the CDJ-1000 club standard was born. Now, though, Denon seems poised and ready for battle, with its newer models including pretty much everything the Pioneer decks have to offer. 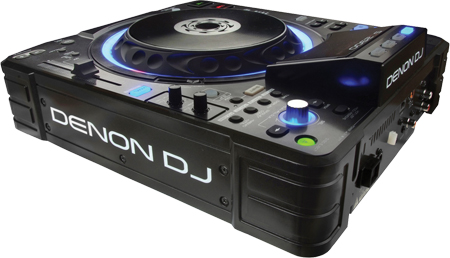 The SC2900 isn’t the cheapest of units, but its features and build go a long way towards justifying its price. It’s nicely weighted and thanks to its sturdy rubberised feet it’s not going to be going anywhere during a performance. The buttons, switches, pitch control and new Eclipse platter also have a solid feel to them. This platter is non-motorised, unlike the SC3900 model which preceded the SC2900, making it closer to the feel of a Pioneer deck.

The surrounding LEDs of the Eclipse platter are striking in appearance and have a very bright output. However, they aren’t just a gimmick: they display a red position marker for playback positions and cue points over a blue backdrop. Anyone who likes to beat-juggle or scratch will prefer this visual aid to the small, central displays seen on Pioneer decks. As it’s placed on the outside of the platter it has more accuracy due to the larger circumference, which also means that it’s much less likely to be covered by your hands when you’re performing a furious routine.

Connectivity is fairly straightforward: there are stereo RCA outs, an S/PDIF out for a digital mixer, USB for MIDI connectivity to your computer, and a fader connection port to cue, play and so on with a compatible mixer. There’s also an Ethernet socket for networking so you can use the included Engine software for crate organisation and USB-sharing between multiple decks from a B-type socket at the rear. A second USB port is located on the top for connecting a memory stick or external hard drive containing music to mix with.

Along with the choice of CD or USB for your music, the SC2900 can also act purely as a DJ controller when switched to MIDI mode. These modes are easy to switch between via buttons in the main display area. You can then use the included Traktor LE software (or purchase the full Pro version) to open up the vast possibilities of DJ software and your computer’s library. These three modes of operation make these decks accessible for various preferred approaches to DJ’ing and also offer a few back-up options should anything go wrong on the night. You’d feel very safe gigging with a wallet of CDJs, a USB stick and a laptop. But even the first two would be enough as a sensible back up plan.

The display on the SC2900 is adequate and provides a basic track overview waveform along with the other expected numeric information. Plugging in unprepared USB tracks can be a little difficult navigation-wise if there are lots of tracks to go through, but that’s where Engine comes into play, as this enables you to create a library database via your computer as you would in standalone systems like Traktor or Scratch Live.

There are several ways by which you can wire up the SC2900 systems. A computer can connect directly via Ethernet to one SC2900, while the USB connection is for connecting one or more decks directly to Traktor. This requires one USB connection per SC2900, so you’ll need a hub. More connectivity is available but you are then looking to add a network box into the equation. With this you can wire up to four SC2900s, a computer and even an iPad over Wi-Fi to control Engine during a mixing session. You will then benefit from a tactile library experience, loading tracks at will into any SC2900 from the computer or a connected USB drive. In our tests we used the unit with CDs, Traktor and USB drives and didn’t encounter any issues.

Along with the more basic navigation functions for performing a mix, we found reverse and hot cues to be a lot of fun. This takes some practice, though, as hot cues aren’t made or launched with any form of quantising applied, so it’s easy to go from the middle of a good mix to a complete train-wreck if you’re not up to the performance. You can, however, store the hot cues, so at least their positioning can be prepared beforehand. If you’re setting hot cues on-the-fly, the button layout suits those who like drum pads. The hot-cue Clear button is also directly to the side, so it’s easy to quickly replace one cue and give it a new function in the heat of a jam. Toggling between cues and using the reverse switch is also very fun and we stumbled on lots of cool remix ideas with these two techniques alone.

In our tests we found the SC2900 to be reliable and with a professional feel that’s comparable to the competition. Will it replace Pioneer as an industry standard? Probably not, as that’s also reliant on being lucky with the ‘right time and place’ situation. But if a club, radio station or yourself are looking to own one or more well-built decks with professional features while saving some money, the SC2900 is certainly worth a whirl.

+ Eclipse platters and lights improve on other designs

+ USB data can be shared

If the SC2900 was the same price as a Pioneer CDJ 2000 we’d say Denon had omitted a few things. However, for this money these decks are well worth considering.

Here’s a vid from Denon: