Sample Logic’s latest library is full to the brim with explosive cinematic effects and transitions. Mark Cousins takes it out on his ears in this review of Sample Logic’s Assault. Details Price $299 Contact via website Web www.samplelogic.com  Amazon.co.uk Widgets Over the last ten years, cinematic music has seen a distinct shift away from the traditional orchestral score, […] 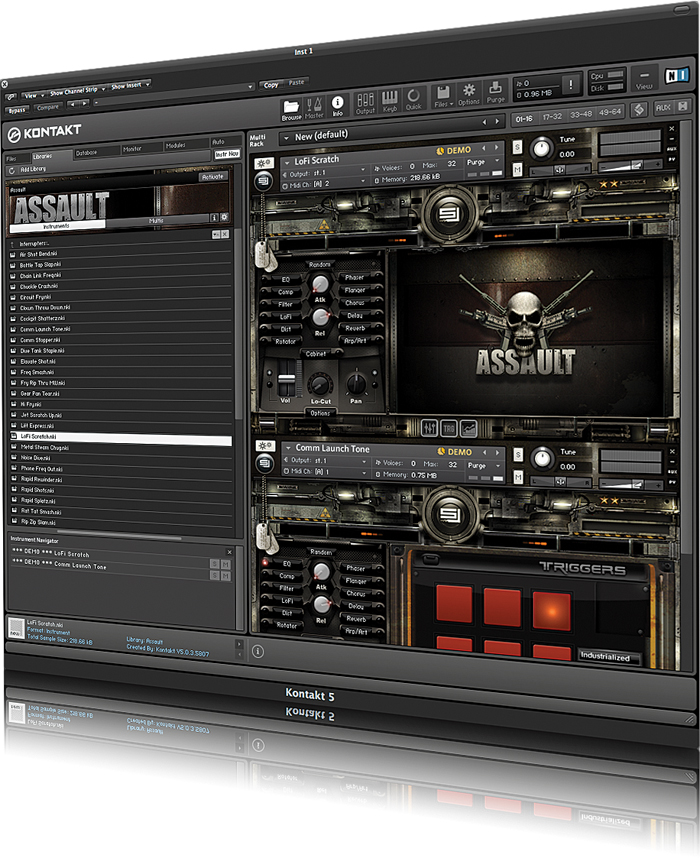 Sample Logic’s latest library is full to the brim with explosive cinematic effects and transitions. Mark Cousins takes it out on his ears in this review of Sample Logic’s Assault.

Over the last ten years, cinematic music has seen a distinct shift away from the traditional orchestral score, instead placing greater emphasis on textural sound design. Scores like Hans Zimmer’s Man Of Steel soundtrack as well as a wealth of action trailers that sound closer to dubstep than Debussy, illustrate that cutting-edge sound design is often the driving force behind contemporary cinematic music. Echoing these musical developments, therefore, Sample Logic’s range of sample libraries have placed an emphasis on sound design, often using conventional sources – such as guitars or marching band brass – in unusual and creative ways.

Sonic Assault
Assault is Sample Logic’s latest offering, this time exploring a range of powerful cinematic impacts and transition effects. The library includes more than 850 instruments and multis, which is an impressive count considering its relatively modest installation size (1GB using Kontakt’s lossless compression). In theory, the product sits neatly between the world of foley-like effects, which might be used by a dubbing engineer or sound designer to enhance more ‘explosive’ onscreen action, and the world of music and soundtrack production, where the same powerful hits, scrapes and transitions can be used to great musical effect.

Not surprisingly, Assault’s range of aggressive industrial sounds have all been sourced from recordings made by veteran sound effects guru Rick Allen. The list of sources is largely what you’d expect from a typical foley session – dumpsters, rifles, breaking glass and so on – coupled with a collection of more traditional percussion sources. These recordings have then been passed through Sample Logic’s unique ‘sound-mangling’ process, often making the sounds even harder and more aggressive than their original source, which is an impressive feat in itself!

Powerful Impact
To help navigate the library, the instruments are divided into categories such as Impacts, Interrupters, Scrapes and Sweeps, and there’s also a bank of instruments that deploy some interesting tempo-sync’ed rhythm effects using Assault’s built-in arpeggiator. While the library is an excellent source of high-impact industrial sounds, it possibly misses out when it comes to more subtle effects or more traditional percussive sounds. Native Instruments’ Damage, for example, manages to include both the aforementioned industrial effects combined with some delicately multisampled percussion sources, which increases the scope of the library.

Industrial Logic
Compared to some of Sample Logic’s other products, which tend to offer an array of ambient, rhythmic and effects-based sounds, Assault is clearly focused on the one application. If you’re looking for some powerful industrial hits and extreme transition effects, you’ll undoubtedly be impressed by the energy Assault has to offer. However, in an ideal world it might have been beneficial to see a little more scope and versatility, especially given the strong competition from the aforementioned Damage library, possibly through a greater range of multisampled instrumental sources.

Overall, though, Sample Logic continues to shine as one of the most imaginative sample developers in the world of cinematic sound design. Balanced correctly, the sounds deliver all the crunch, ear candy and power you’d expect in a contemporary trailer – a quality that can elude some of the more ‘polite’ solutions on the market. Equally, there’s plenty of scope beyond cinematic production, especially if heavy, grinding industrial sounds are a feature of your music.

Sample Logic’s Assault places a distinct emphasis on explosive cinematic effects. What Assault lacks in subtlety it more than makes up for in powerful, ear-crunching hits and transitions.