Mike Hillier considers the potential benefits that this dedicated headphone amplifier, the RNHP, can bring to your mixing setup… Details Manufacturer Rupert Neve Designs Price £529 Contact Sonic Distribution 0845 500 2 500 Web www.rupertneve.com In professional audio, headphone amplifiers are usually among the last things we tend to think of. Most modern audio interfaces […] 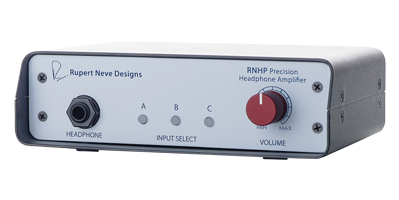 Mike Hillier considers the potential benefits that this dedicated headphone amplifier, the RNHP, can bring to your mixing setup…

In professional audio, headphone amplifiers are usually among the last things we tend to think of. Most modern audio interfaces will have one or two headphone outputs and for the most part, that’s been good enough. The Rupert Neve Designs RNHP is a dedicated headphone amplifier, designed to drive a single pair of pro-quality ’phones with exceptional quality. The circuit is borrowed from the RND 5060 Centerpiece desktop mixer, which is itself based on the larger 5088 console, giving the RNHP a very strong pedigree to live up to.

The three input options are each calibrated to expect a different level of signal. The combi inputs expect a professional level balanced +4dBu signal – this is likely to be the outputs from your audio interface or mixer. Alternatively, the RCA inputs are calibrated for unbalanced signals. Finally, the stereo 1/8-inch jack is designed for use with the lower-quality headphone amps built into laptops and mp3 players.

All three inputs can be hooked up simultaneously, with switching done from buttons on the front panel, which also houses the 1/4-inch headphone socket and volume knob.
Our studio interface has no headphone output built-in, and we’ve been reliant on the headphone amp built-into our SE Munro Egg 150 system amplifier. Lined up against the SE amplifier, using a pair of Sennheiser HD 280 Pro closed-back headphones and the balanced input on both units, the RNHP was a touch brighter, with a touch less bass.

Playing through our reference tracks, this resulted in the pounding kick drum on Daft Punk’s Rock’ n Roll being a little lighter on the RNHP than the Egg amp. The snare and claps, though, seemed more snappy through the RNHP.

The big crunchy distorted guitars on Godspeed You! Black Emperor’s Mladic were much cleaner through the RNHP, leaving more room for the string arrangements. Elton John’s Tiny Dancer was more vocal-forward with the Egg amplifier, while the RNHP brought the piano and the string section closer to the front, while the vocal sat more into the track. The bass guitar seemed to lose a little energy compared to the Eggs, which helped the whole mix to sit more comfortably.

The brass arrangement on Revere’s As The Radars Sleep sits right in your face on the RNHP, with the breakup around the top of the instruments sounding like the mic is giving everything it has. Through the Egg amp, this distortion simply sounded like a generic distortion plug-in placed across the brass, and they sat in among the rest of the mix much more.

All in all, we preferred the RNHP sound to that of the Egg amp’s built-in headphone amp. Comparing these in turn against the room sound, this time using the Egg 150 monitors, shows the obvious benefits of checking mixes on ’phones, but also the shortcomings.

In the room, the sound has a little more room to breathe, the instruments can hit your chest just as much as your ears. Stereo spacialisation is a little better, though not substantially, using the headphones; but it became much easier to focus on details and to listen closely to reverb tails.

If you mix on headphones often, then a great headphone amp is going to help, and the RNHP is exactly this. But if you mostly mix on monitors, with the occasional switch to headphones for an alternative perspective, then you might want to consider this as a luxury upgrade, rather than a necessity.

Alternatives
The RNHP is a great-sounding device, which really brought a better sound from our now fairly old headphones. If you’re looking for an alternative, it’s worth considering many of the hi-fi headphone amps, rather than something designed specifically for the studio world. 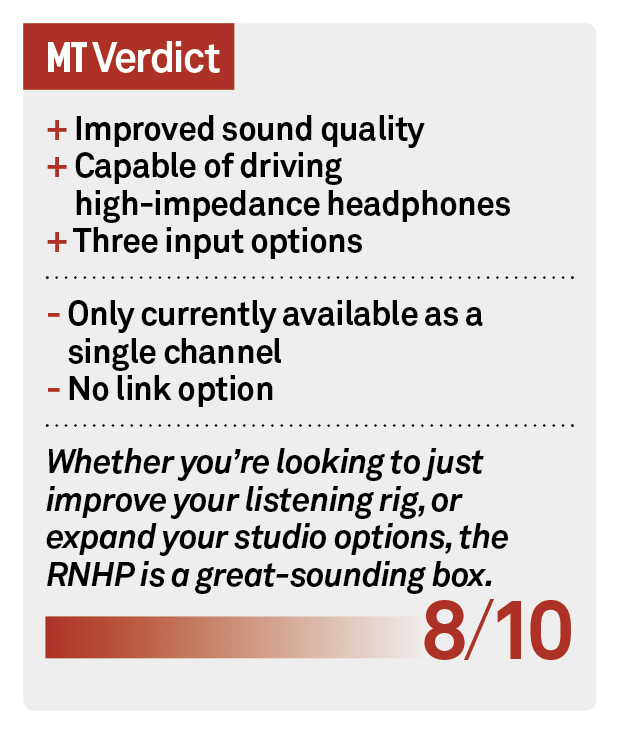