Roland’s flagship stage piano inherits some technology from the formidable V-Piano. Hollin Jones finds out if it’s V for victory… Details Price  £1799 Contact  Via website Web  www.roland.com Amazon.co.uk Widgets Roland has been at the cutting edge of stage piano design for a number of years and has a well-earned reputation for building instruments that […] 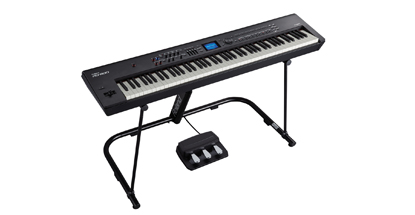 Roland’s flagship stage piano inherits some technology from the formidable V-Piano. Hollin Jones finds out if it’s V for victory… 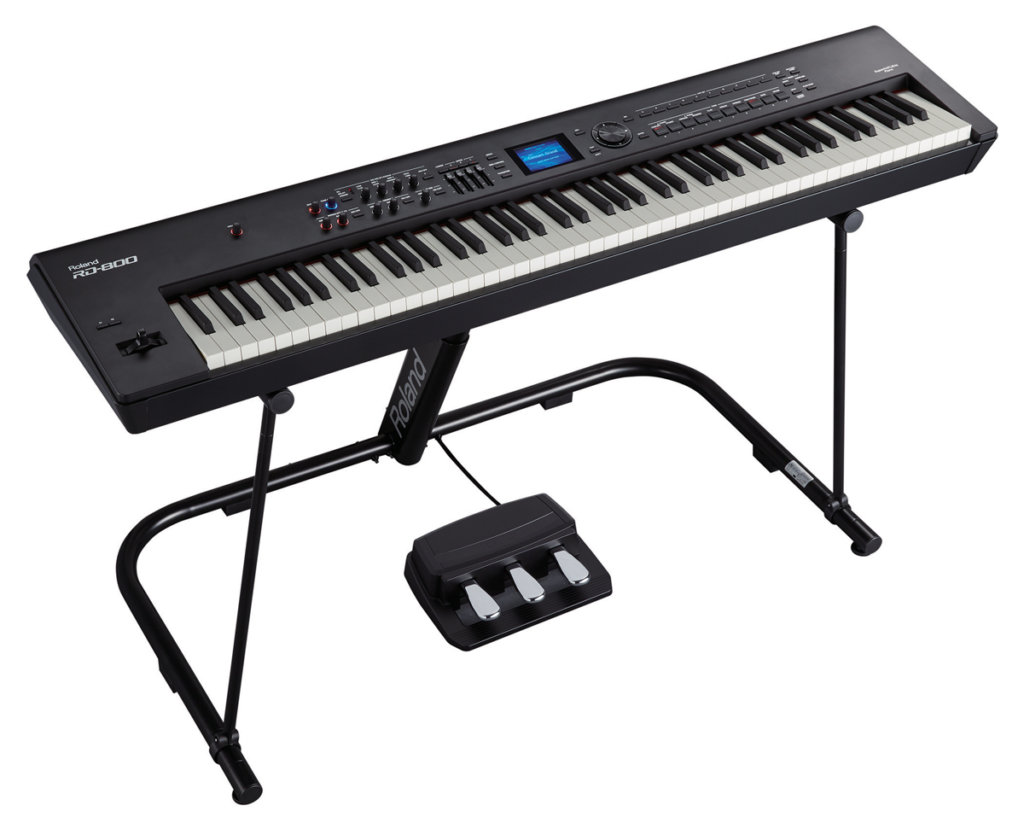 Roland has been at the cutting edge of stage piano design for a number of years and has a well-earned reputation for building instruments that players love to use. The RD series has been going for a while and is its flagship stage piano, if you don’t count the seriously exclusive V-Piano which is somewhat less portable for a gigging musician.

Stage pianos have come a long way, both in terms of sound quality and portability, and they can now replace several physical keyboard instruments without sacrificing authentic sound. 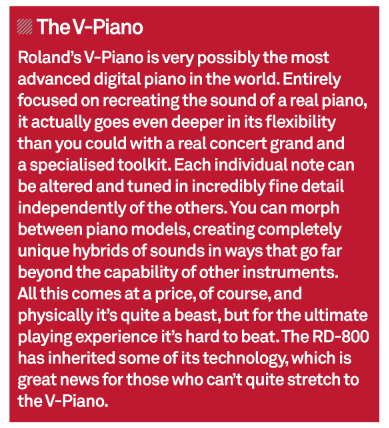 The RD-800 is as solid as any stage piano but a little lighter than you might expect, something that Roland has been working on. Any weight saving is to be welcomed when you have to carry these things around. There’s a sort of binding post on the back that acts to prevent the power lead being ripped out in the event of someone tripping over the cable – again a nod to the realities of live performance. As well as a headphone out you also get stereo XLR and jack outputs so you can connect to any kind of PA or amp, and a mini stereo jack in for connecting an MP3 player to route through to the outputs. There’s hardware MIDI in, out and thru and four pedal inputs: Damper, Ext and two foot controllers.

The piano comes with a sustain pedal which is essential for proper playing, and there are also two USB ports on the rear panel. One connects to your Mac or PC and transmits MIDI back and forth, and the other can be used to connect a USB memory stick or a wireless adaptor. With a memory stick you can load and record WAV files of backing tracks or your performance, and with wireless you can connect to one of Roland’s iPad apps such as Piano Partner for learning to play. You can’t at present send MIDI wirelessly to a receiver for triggering a DAW, which would be a nice addition.

Keys to the Kingdom

The keybed is an 88-key weighted PHA-4 concert keyboard with Escapement (for more expressive soft playing) and an ebony/ivory feel. As you might expect it’s extremely responsive to play, with an incredible action.

And the keys really do have a grand piano feel to them – the simulated ivory finish being particularly noticeable compared to the regular plastic of some other stage pianos. The action is perhaps best appreciated when playing the piano sounds, since they’re generally the most expressive.

There are four sound engines on board: The SuperNATURAL Piano, SuperNATURAL electric pianos and clavis, a virtual tonewheel organ, and a PCM sound generator for the other sounds. There’s a total of 1113 tones, a maximum 128 voices and 16 parts. The jewel in the crown is the Concert Grand piano model which is derived from the V-Piano Grand, though there are actually five acoustic piano types available and 34 variations within these. Calling up and editing sounds is easy, thanks to the clear layout of the front panel, the large colour screen and the navigation controls.

Play it One More Time

The pianos sound exquisite, of course, but there’s a lot you can do to tweak them to your liking. There’s a Piano Designer section available for piano patches and this lets you alter in fine detail the many characteristics that go to make up the sound, such as string resonance, key-off resonance, hammer noise and more.- 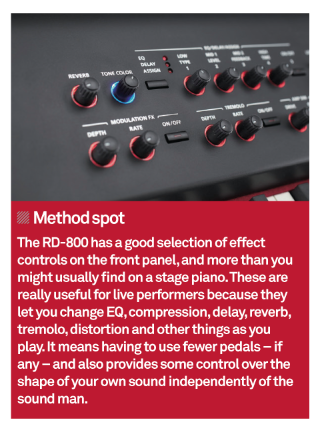 Even better, carried over from the V-Piano is Individual Note Voicing, a technology that lets you adjust the pitch, character and level for every individual note of a piano sound. With this you can edit as if your piano was real rather than having to make global settings for the whole preset. A Tone Colour knob is also available for every sound, and with a SuperNATURAL piano selected this defaults to control the sound’s width so you can dial in stereo or mono effect as you wish.

The electric piano section is also remarkably accurate, with a great selection of Rhodes, Wurlis, Clavis and others from the 60s to the 80s. Again you can edit things like mechanical key noise, damper noise and more, and there’s a very cool feature where the Tone Colour knob lets you morph between electric piano models so you can, for example, blend a little hard edge into your dreamy EP sound. The effects really come into their own here, with gritty distortions and amp simulators lending the electric pianos a truly authentic feel.

In fact there are quite a few effects, many of which have realtime, backlit controls on the front panel for live tweaking. There are 56 types of modulation effects, six reverb and five delay types as well as a three-band compressor and five-band digital EQ. The reverb, modulation, tremolo and amp sim sections all have their own hardware controls, and there are four further dials which can be set to control EQ, delay or a user-assignable parameter. Four sliders control part volumes, and the keyboard can be split and layered as well as transposed.

There are Live Sets available which are presets you can flip between on the fly. So, for example, you might have a bass in the left hand and layered piano and strings on the right, with effects assigned accordingly. Hardware shortcuts mean you can switch between these without fiddling around in menus, which is a relief. The RD-800 is all about live performance, and players will know how important it is to be able to transpose, boost or cut EQ, change part volumes or vary effect levels as quickly as possible. Luckily this is all easy to do.

There are many other sounds on board, though they aren’t perhaps as breathtaking as the pianos and EPs. Some serviceable organs benefit from the addition of some grit via the effects, and the sliders become drawbars in organ mode, plus there are strings, pads, basses, brass and others to give you a few options. Some pre-programmed backing beats are available too should you need them.

A stage piano should always focus on performance, and that’s what the RD-800 does. The acoustic pianos are breathtaking, the electric models just as good in a more retro way. The keybed feels fantastic and the instrument as a whole is supremely playable.

Placing multiple effect controls at the player’s fingertips is very welcome and means you can be more creative mid-performance than if you had to dig around in submenus. And the effects are very good and really useable as well, letting you modify your sound as you go in a way that many keyboards don’t.

The RD-800 is an excellent stage piano that focuses on what players need: a wonderful action, gorgeous sounds and powerful effects. The other stuff like audio file playback and MIDI control works well, but it’s when you’re designing and playing pianos that this instrument really comes into its own. 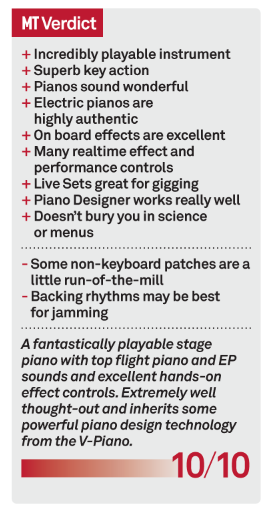