One of the main talking points of this year’s NAMM show was the Roland JD-Xi. Andy Jones has had one for a while, and embarks on his most stressful world exclusive review ever… Details Price £399 Contact Roland – 01792 702701 Web www.roland.co.uk Roland is on a roll at the moment, there’s no doubt about that. […] 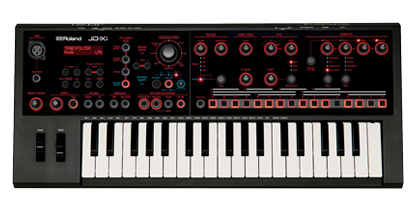 One of the main talking points of this year’s NAMM show was the Roland JD-Xi. Andy Jones has had one for a while, and embarks on his most stressful world exclusive review ever…

Roland is on a roll at the moment, there’s no doubt about that. Mind you, considering that the company has been floundering around like a blind, drunk man for the better part of a decade, it’s about time. But, by all accounts, last year’s AIRA range has re-injected some much needed cash and pride into the organisation, and now it has a clear path ahead with divisions a-plenty and the R&D teams working overtime. So this year’s NAMM show was an incredibly busy one in terms of MusicTech related gear.

There’s the new piece of AIRA hardware, interfaces and other bits and pieces, plus “the secret” that no-one is supposed to know about which I saw demo’d alongside the new Roland JD-Xi that’s on test here.

First, let’s have a good look at the JD’s specs and price – I’m sure you’ll agree they make for an impressive start to the review.

The JD-Xi delivers an analogue synth engine (monophonic) plus one digital synth engine offering 128 notes of polyphony over “a wide range of SuperNATURAL-based PCM tones” that includes drum sounds.

The synth also boasts a pattern sequencer, vocoder (complete with gooseneck mic), plus effects for both this and the on-board synths, so you have, on paper, an astonishing spec. Even more amazing is the price: it comes in at less than £400! When I heard the price and the spec I was, frankly, blown away. When it arrived, however, I have to say that excitement was initially deflated…

You Lightweight
What turned up was an incredibly light box containing an incredibly light keyboard. “Hardly a keyboard stuffed full of analogue circuitry,” I thought. You can hold the JD-Xi with just one thumb and two fingers, it’s that light. It also has 37 mini keys of which I’m not a fan, so first impressions were “yes, it costs less than £400 – but that’s for a reason.” Then I had to rush off to NAMM, and the keyboard was left in my studio ready for test on my return.

And so I found myself in the Roland “secret room” at NAMM with a demonstrator ready to fire it up, and I must admit I was feeling rather jaded and cynical and this point. I already had one at my house, had drawn some early conclusions: it felt light-weight, what I’d played had been ok, so I thought: “come on and impress me, mate”. He switched it on, and then: bang…

It’s Bigger on The Inside
To say what came out of the machine during that demo was great would be an understatement. Of course demos at gear shows are supposed to do that so part of me remained wary, but I decided that on my return from NAMM I should immediately fire the JD-Xi up and give it another go. And, largely, I’m glad I did.

Before I go through the sounds, let’s have a quick look at the keyboard’s main architecture and front panel. So you get Tones (the individual sound from the synths or drums); Parts (the source the Tone comes from: Analogue Synth, or Digital Synth/Drums); and finally the Program.

Each JD-Xi Program has four Parts, comprising one Analogue Synth Part and two parts and Drums from the Digital Synth. These are effectively performances, presets of which lie across banks A to D (64 in each). User Programs can be stored in banks E to H (64 each) so you can create your own combinations of Parts from each synth quite easily and quickly.

Simply step through the Programs using the Program Value + and – buttons beneath the screen. Find out the Tones that make up the Program by selecting each Part using the Part Select column of four buttons. Then use the Tone + and – to change each tone. To make things even easier, there’s a dial to select synth sounds by category.

Once you have four tones you like, simply save to a user Program location. Handily, you can also save 16 of your favourites to the 16 buttons along the bottom of the synth.

It’s important to note that unlike performances you know and love from many other synths, you can’t play these as a massive wall of sound together; you can however record them to a Pattern to play back together – more on this later. For now though, let’s have a listen to the sounds, or Tones, from each source: analogue, digital and drums.

Tone Wars
We’ll start with the analogue engine as I’m sure that will be of most interest. It’s monophonic for sure, but has a fat sound helped by the Sub OSC which can add a layer of lower frequencies one or two octaves down. The presets concentrate on basses and leads, as you might expect. The former are suitably thick, dirty and fat, as you might also expect from a company with Roland’s heritage.

As if one analogue synth, a digital synth (including drums) and sequencer weren’t enough, you can also plug in the  supplied goose-neck mic for some polyphonic vocal hilarity.

There are plenty of wobbling effects for today’s dance musician and plenty of deep sub basses and tearing leads for everyone. Celoclip 1 is a searing lead suitable for some big dubstep tunes while the incredibly simple House Bass 3 does what it says on the tin.

So it’s a very solid engine with 64 presets that display a good selection of sounds. You might notice background noise on a few – it’s not so much hiss but is audible on the quieter tones. I found that boosting the volume didn’t boost it, however, so you can effectively drown it out by adding a bit of gain.

I should also mention the Synth section here on the JD-s front panel. It’s very much a ‘best of’ analogue synth set of controls. So you get the most dramatic dials (filter, LFO resonance, etc) for some instant sound tweaking. There are six LFO waveforms to choose from and three destinations (pitch, filter and amp). It may be simple but it’s very effective, and it also works on the digital section. Talking of which…

Continue to Next Page