The latest soft synth from Rob Papen is the successor to one of his established classics. Dave Gale powers up Predator 2 to see if this sequel is a killer update… Details Manufacturer Rob Papen Price £124 (upgrade from Predator 1 €49) Contact Time+Space – 01837 55400 – sales@timespace.com Web – www.timespace.com Rob Papen is a name that has […] 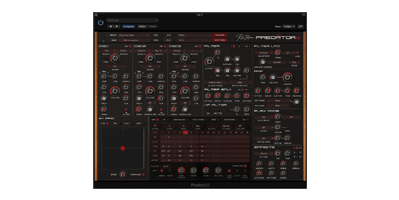 The latest soft synth from Rob Papen is the successor to one of his established classics. Dave Gale powers up Predator 2 to see if this sequel is a killer update… 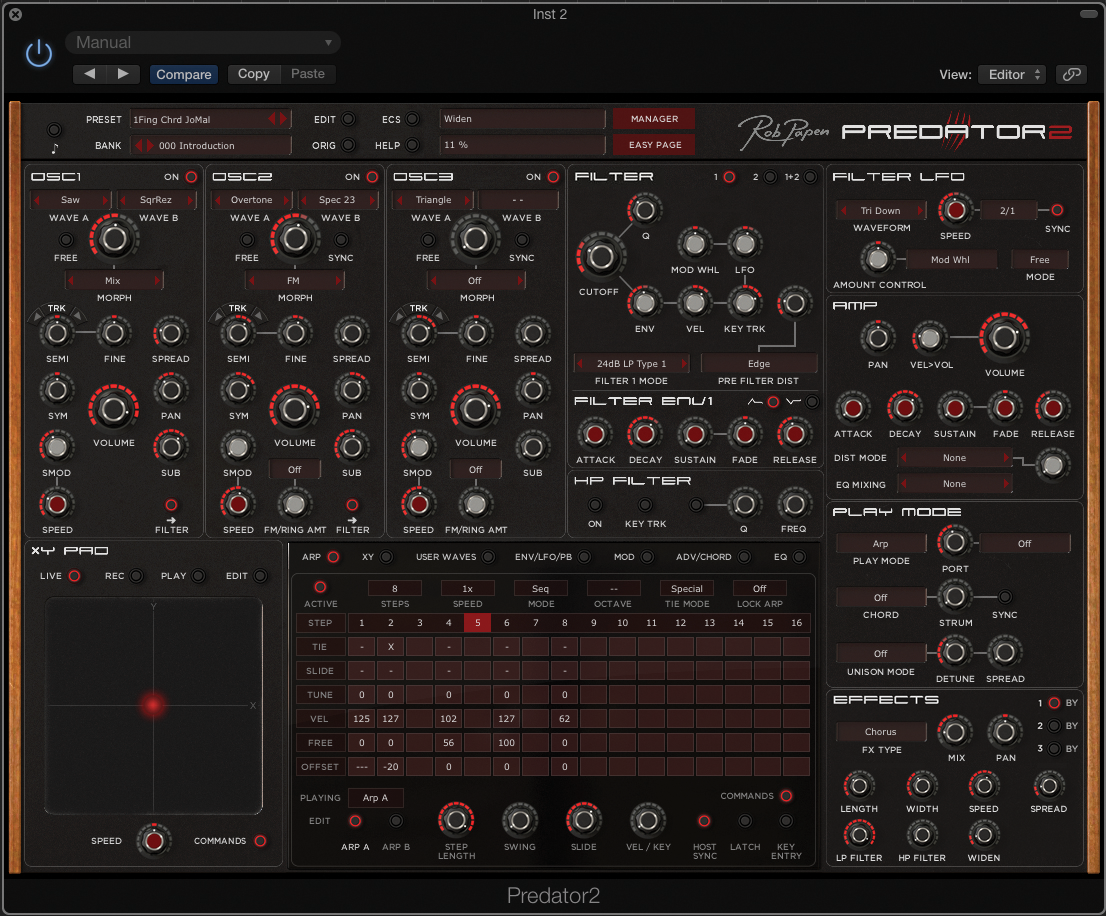 Rob Papen is a name that has become synonymous with virtual instrument plug-ins, following on from the legacy, set by the likes of Albino. Predator 2 is a long-awaited update, which promises a whole host of new features and functions, so let’s dive in…

Makeup of the Predator 2

Starting at the beginning, the oscillators of Predator 2 see the first major update; these three primary tone sources offer the selection of one of 128 waveforms, which consist of basic classics and more advanced wavetable timbres.

Added to which, each oscillator can now host two of these waves, and be blended, via the rather obvious Morph control – but going further, this control can be set to a number of other functions, such as FM and Ring Modulation. Timbres go from clean and classic, right the way through to grainy and crunchy, and that’s before we’ve got to any sort of effects processing.

To compensate for any over-accuracy in the digital architecture, there are both Coarse and Fine tuning controls, plus a rather handy Spread control (the result of which is akin to a super-detuned waveform). Factor in other useable features, such as a sub oscillator on each oscillator channel and the ability to change amplitude and panning, and you have a very comprehensive synth.

So this is all great and usable stuff, but what of the sound? Well, being very careful to make sure that no additional elements were at play, and with the filters switched off, I took a listen to the basic waveforms in isolation.

Starting with the ubiquitous Saw, I got the under whelming feeling that it felt a little lightweight, which was a bit of common thread that seemed to run through all of my waveform selections. By lightweight, I mean there seems to be a lack of depth in the lower-mid frequency band, which I suppose could be put right with some EQ, but it’s always a shame if the source material feels underwhelming.

I also discovered a strange trait: when adding in a second Saw and blending them together, as the super Spread parameter was invoked, a strange whistling digital artefact became present, which was revealed when played in the lower register.

I must add this has nothing to do with whistling filters; instead, it seems to be something to do with the blending of two waves and the Spread. But it did rather remind me of a 12-bit digital synth from the mid-80s, which wasn’t something I was expecting…

Putting this to one side, what is undeniable is the great choice of source timbre. I am always a complete sucker for vowel/human sounds and wavetables, and there’s plenty of content here.

With these more complex waves comes a nice feature in the shape of Symmetry, which allows the user to define a point within the wavetable. There’s also a dedicated LFO within each oscillator, with exclusive control of Symmetry Modulation (Smod), and within seconds, I had some really interesting meanderings through wavetables which, when mixed with further, more basic oscillator settings, gave a great sense of movement.

It’s important to remind ourselves at this point that we haven’t even ventured elsewhere yet… This is still just the oscillator section.

So let’s now avail ourselves of a filter or three, because that’s what we have. Again, there is a very fulsome selection here, with filters one and two sharing the available list of credentials.

Apart from the obvious suspects, we have 6, 12, 18, 24 and 36dB options for both high- and low-pass varieties, with smatterings of notch and band pass thrown in for good measure. But where it gets interesting is with the inclusion of formant and comb filtering, the latter offering a cavalcade of glistening colour, which ascends in true comb style. Filters one and two can be switched on and off, allowing the user to switch from one to another, or they can also be linked in series to create a powerful combo.

When this is combined with the third utility filter, which is exclusively high pass, it creates a very potent combination.

In operation, the filter feels a little vanilla until the resonance is brought into play, at which point, it can whistle like crazy. It’s a little excessive in this regard for my liking, but better to have it than not. This seems to be a symptom of many soft-synth filters, and certainly not exclusive to the Predator 2. Thanks to the vast choice of filter, the usual low-end dropout can be avoided if you do want to crank the resonance. The filters can also be routed from envelopes, and there’s a dedicated Amount control for this purpose.

Talking of which, there is (not surprisingly) plenty of modulation available, from the usual sources.

Both two filter envelopes are fast and snappy;so much so, that I found the decay to tail off rather swiftly, in the sense that it ditches at the last moment, which I found irritating.
Not surprisingly, this seemed to be amplified when routed to the filter cut off – but on the flip side, the front end is sharp and perfect for modern tones and percussive timbre.

A third envelope is assigned to amplitude, while a fully functioning LFO, separate to the oscillator LFOs mentioned earlier, offers considerable routing potential, as well as clocking to the DAW or freewheeling.

The XY and Matrix

A common feature of many Rob Papen products is the XY pad, which is implemented in Predator 2 for the first time. Linked with the matrix which nestles to the right of the pad, a bewildering array of parameters can be assigned to both X and Y, which include features from pretty much every section of the synth.

In turn, the inviting pad allows the user to drag the mouse around in real time, or record movements for playback, with control over speed. It’s a very addictive function and is endlessly useful, although more delights await us next door, in the matrix. Here, we can program the arpeggiator/sequencer, in steps up to 16.

The fully functional arpeggiator also offers a bewildering number of functions, including basic arpeggios up to chordal-based sequences, but with this control comes a degree to complexity in programming, which is largely based around numbers. This takes a little getting used to, but is largely intuitive, with additional features in the shape of swing and slide amounts.

If you don’t mind number crunching, you’ll pick this up relatively quickly, but if you prefer something more visual, it might take you a while to get your head around the concept. However, if you’re excited by visuals, the next aspect that awaits you will no doubt delight…

User Waves can be created by simply drawing on to the grid, and then hearing your opus played back in real time. It’s important to select the appropriate User Wave in the oscillator section, which corresponds simply by number, but once this is done, it’s easy to draw in what you want, either freehand or using lines mode – although I also very much enjoyed working with the Partials mode, which displays all of the information in a histogram style. 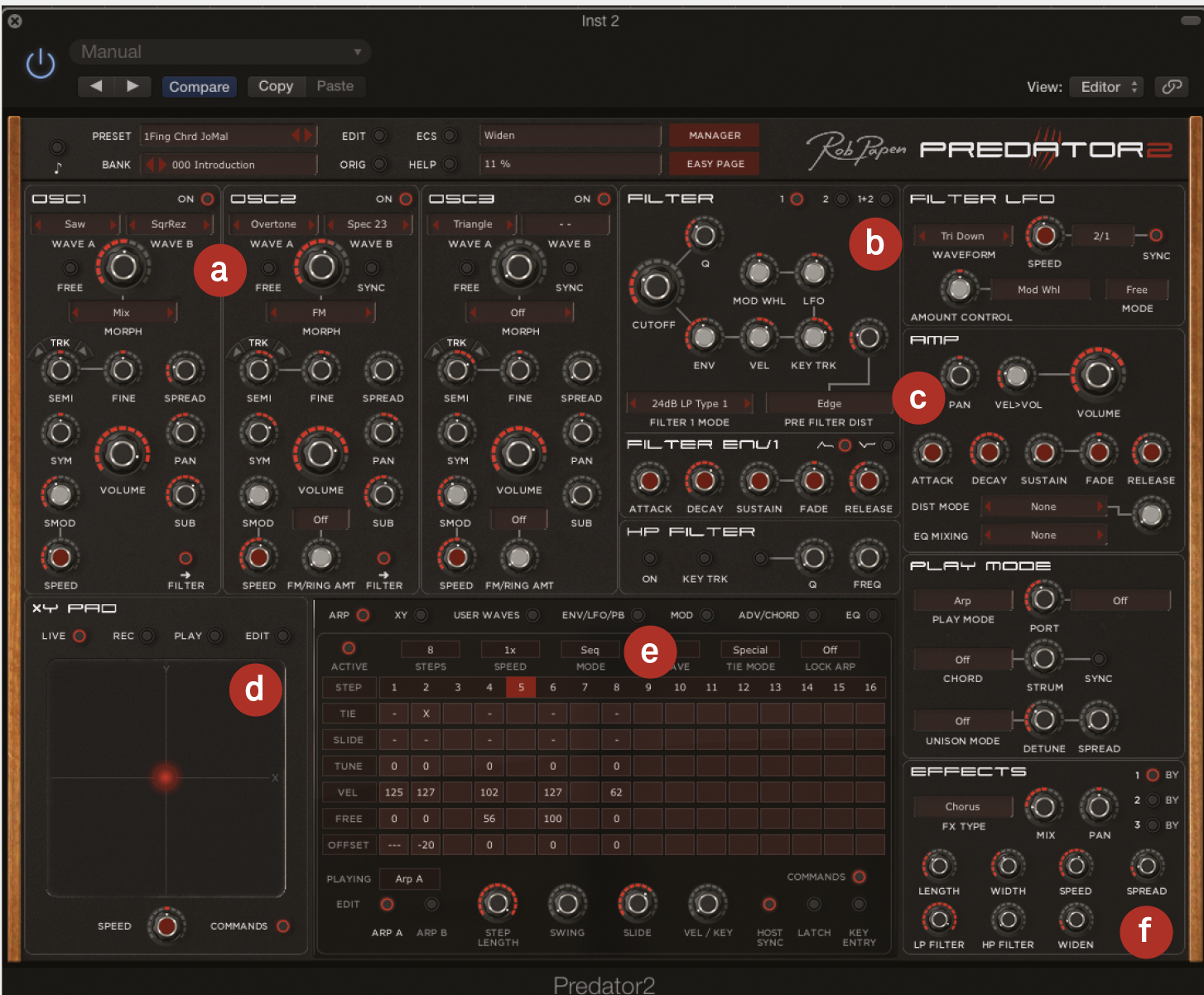 b:Filters galore – The extensive selection of filters is doubled, with a third high-pass filter below. Note the dedicated filter envelope just below, placed right where you want it

c: ADSFR – The amplitude envelope offers five stages, with a useful ‘fade’ element, which links in with the sustain phase

d: Real-Time XY Movement – The XY pad allows for live movement, in real-time, with the ability to capture and play back these movements. The speed pot controls the time aspect of motion playback

e: Matrix Manipulation – The matrix is the place to go to change the settings of the XY pad and anything sequencer or arpeggiator based. There are plenty of elements to change your chosen patterns, but you’ll need to work with the numbers

f: Full Effects – The backend of Predator 2 has plenty of FX to liven up your sound. Chorus, delay and even cabinet simulators can all be applied from within the plug-in

There’s no doubt that Predator 2 lends itself to a range of musical styles. As a fully fledged synth, it’s capable of a wide variety of tones, with a large tonal palette right out of the box.

It’s easy enough to move away from the presets and be creative, but I found myself having to work quite hard to get something that felt like it would fit my sound world. With all of this in mind, and with my previous thoughts on its overall sound, I would suggest that this may well cut through a commercial mix quite well. So if you work at the more commercial end of music, and are a little tired of your onboard synths, this could well be worth a look.

Quite helpfully, a demo version of Predator 2 is available so you don’t have to part with any money to try it out, which is always a welcome bonus – because soft-synth choice always boils down to sonic preference, and the best place to make that decision will be within your own working environment.

There are so many soft synths to choose from, many of which are based right within your chosen DAW – so you might already have something suitable for most tasks. In Logic Pro X, the ES-2 is often overlooked, but it’s a versatile and comprehensive synth which has a certain colour and usability. 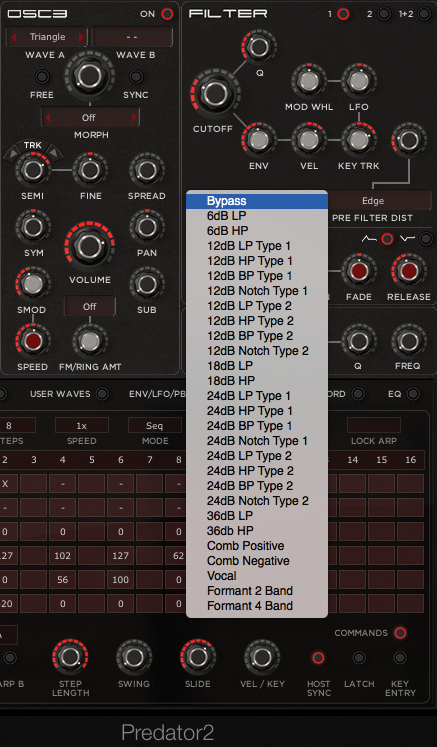 One of the strengths here is the modulation grid that runs across the centre of the fascia, and is flexible and pretty easy to use. However, the obvious third party contender to Predator 2 is Massive from Native Instruments, which, although slightly clunky with certain operations, does sound as its name implies, and – certainly in my listening tests – gave the Predator 2 more than a run for its money.

There’s no doubting that the level of programmability in Predator 2 is vast and that it’s a powerful soft synth on a number of levels. However, when placed up against other soft synths of a similar ilk, some sounds can feel thin and lacking in depth and weight of tone.

I guess that this could be addressed by using external EQ, but somehow it feels wrong that you should be heading into the build of a patch with such antipathy, knowing that it’ll have to be fixed later, rather than at source, and this is disappointing.

Understandably, there will be those who disagree, and that’s the nature of synths – one person’s Moog is another person’s Buchla.

The bottom line is that the flexibility in use with Predator 2 must be applauded, and certainly for mere bang for buck, there’s plenty on offer for everyone here. The vast selection of waveforms and filter types is bewildering and comprehensive – so much so, it could absolutely fit a number of stylistic musical genres with ease 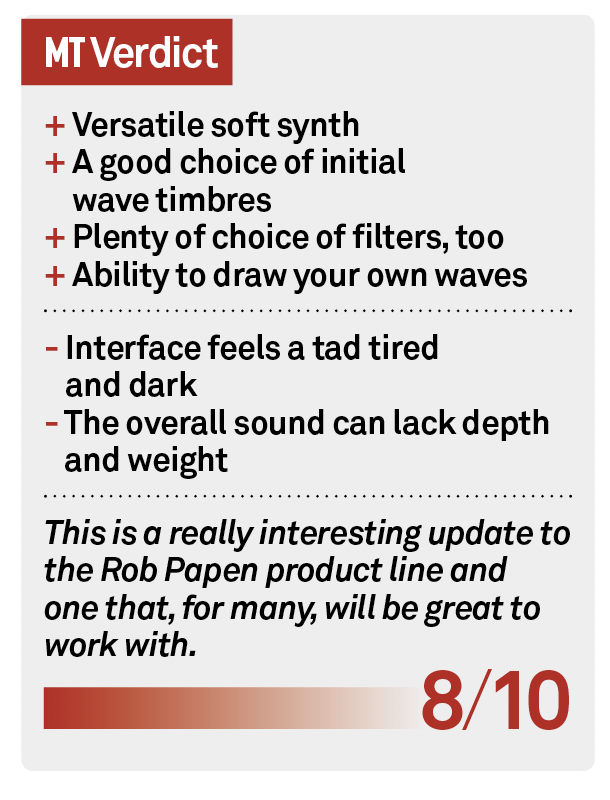