Using an iPad or iPhone for guitar processing is no longer a novelty. Hollin Jones gets jamming… Details Price £6.99 Distributor Positive Grid Contact via website Web www.positivegrid.com Minimum System Requirements iPod Touch 4/5, iPhone 4/5, iPad 2 or higher Californian developer Positive Grid is making something of a name for itself with well-received products such as […] 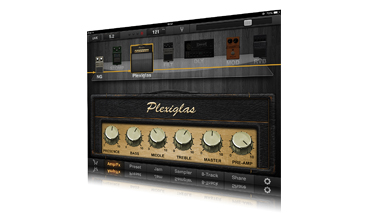 Using an iPad or iPhone for guitar processing is no longer a novelty. Hollin Jones gets jamming… 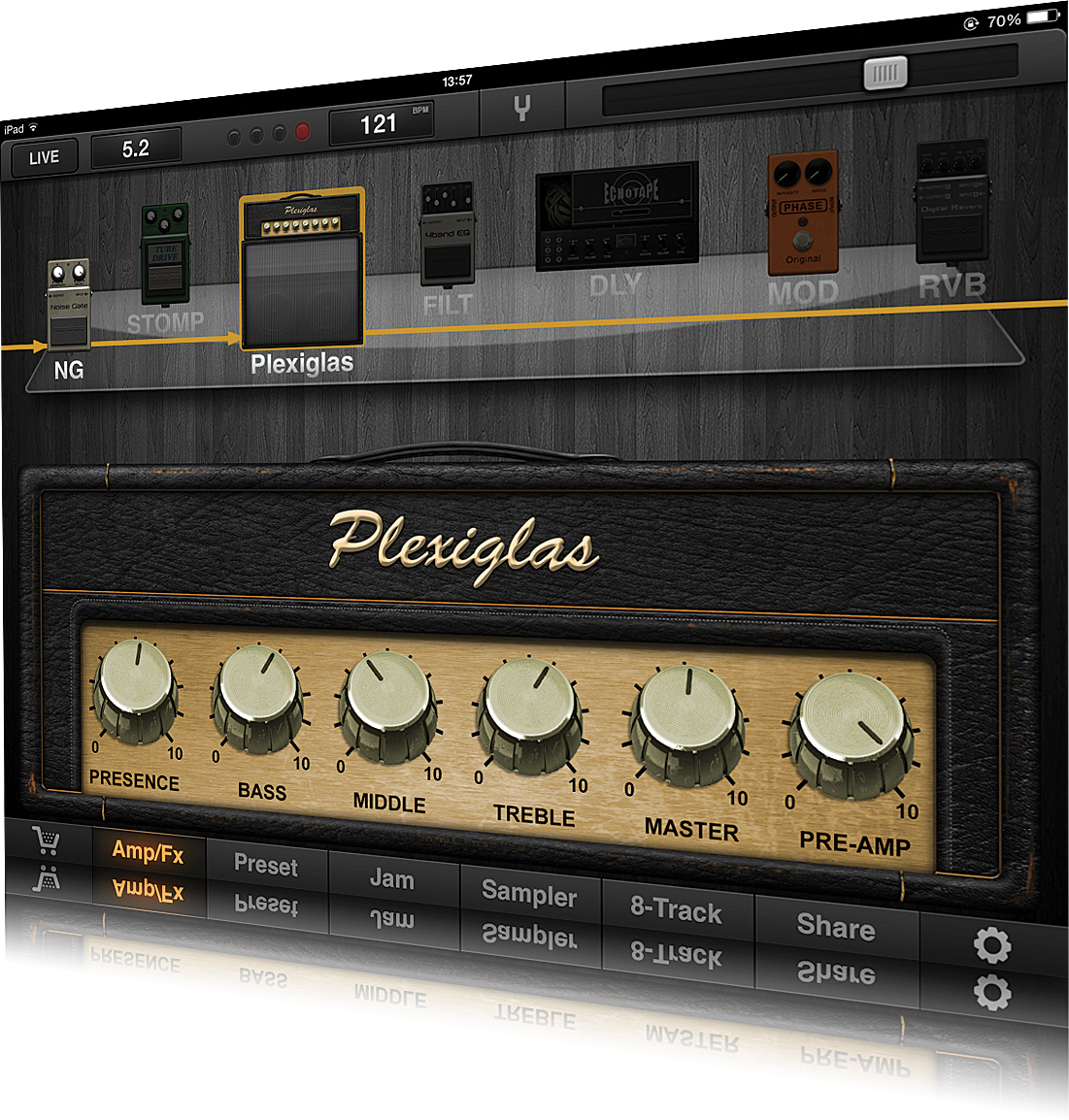 Californian developer Positive Grid is making something of a name for itself with well-received products such as the Final Touch mastering suite, BIAS amps and various hardware accessories for iOS. Its latest is an update to the JamUp guitar processing app that runs on all recent iOS devices. JamUp Pro XT is certainly among the more capable of the many guitar simulation apps out there, offering an all-in-one performance and recording tool for guitarists in all genres.

Heavyweight App
It’s quite a sizeable download from the App Store – a shade under 500MB – so this may be an issue if you are on one of the lower capacity iOS devices. It runs on an iPhone 4, iPad 2 and iPod Touch 4 or higher, which encompasses a fair few devices. As ever, a newer A7-based device will give you a smoother ride. 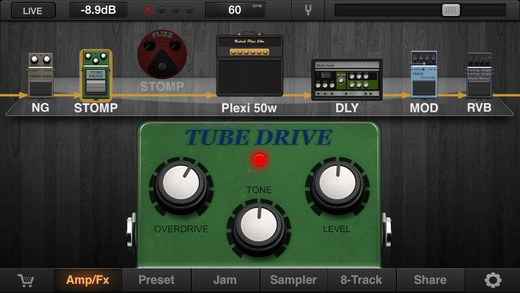 It’s designed to work seamlessly with Positive Grid’s own iOS guitar interfaces and Bluetooth foot controller, and it will also work with all the major third-party iOS audio and MIDI interfaces (a list is provided on the website). There’s the standard stuff you’d expect, such as a built-in tuner and metronome, as well as Audio Copy and Paste functionality.

JamUp Pro XT has six amp models and 16 stomp box and rack effects including distortion, compression, delay, tremolo and spring reverb, and these can be dragged and dropped into a chain with great ease, or swapped out by tapping on them and choosing a replacement module. With a module selected in Amp/FX view, a large control area appears at the base of the window for you to tweak the effect or amp.

Tap into Live view and you get a grid of big, helpful buttons that enable you to switch between presets on the fly – perfect for live performance. If you hook a Bluetooth controller up, its stomp buttons will correspond to these pads so you can switch sounds without using your hands. 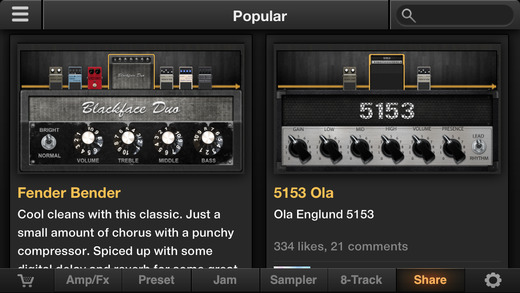 The presets can be managed and tweaked using the Preset section and there are three banks of four pads. Interestingly the app has quite extensive MIDI control, which can be activated in the Settings section. You can view which parameters are assigned to which MIDI CC numbers and also use MIDI learn to reassign them to any CC of your choice, so it would be easy to set up custom controller maps in a few simple steps.

Gear Racks
JamUp Pro XT can actually hold up to 46 amps and 40 effects, but to get them all you have to buy expansion packs via in-app purchases. There are nine of these covering various musical styles from acoustic to metal, priced at £6.99 each, and a £2.99 expansion to enable the full eight-track recorder (by default you get two tracks). 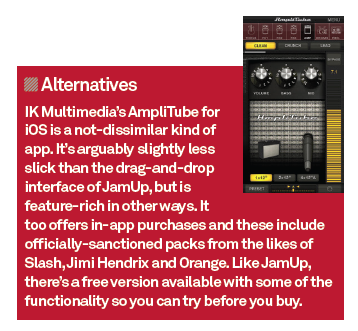 You can run up to seven amp and effect models at any one time and there’s also a handy phrase sampler with loop recording and overdub that can also load tracks you have previously recorded from Audio Paste and from your onboard iTunes library.

Material that you record here can be shared via email, to iTunes or SoundCloud directly from the app. For instant gratification you get a Jam section where it’s possible to load a song from your onboard iPod library and then play it back or loop it using A/B points as you play along. To help you learn a part it’s possible to change the playback speed and pitch of the track as well as its volume, so this is useful for mastering tricky guitar solos. 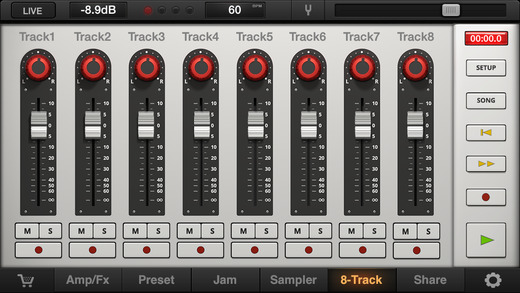 Jam Tomorrow
Once you have created some great signal chains of amps and effects you can share them using the company’s ToneSharing cloud system, and download patches from other users. You can also back up your presets directly to Dropbox from inside the app and sign in to ToneSharing via Facebook. The Settings menu enables you to specify channels to use for audio input and output and there’s an ultra low latency mode for those with more recent hardware.

You can turn background audio on or off, which is useful for keeping the processing going even if you leap into another app deliberately or by accident. JamUp now integrates with the company’s other major guitar app, BIAS, meaning that you can use your own unique custom-created amps from BIAS inside JamUp.

This is a great tool for iOS guitarists and bassists, providing a very user-friendly way to build effects chains, play live, jam, practice and even record. The music library integration is good and the drag-and-drop interaction, as in Positive Grid’s other apps, is a joy to use.

We’re past the point where taking an iPad or even an iPhone on stage seems gimmicky: apps like this paired with modern iOS hardware are a much easier solution for performers than hauling round a battered bag full of pedals and a truck full of amps. 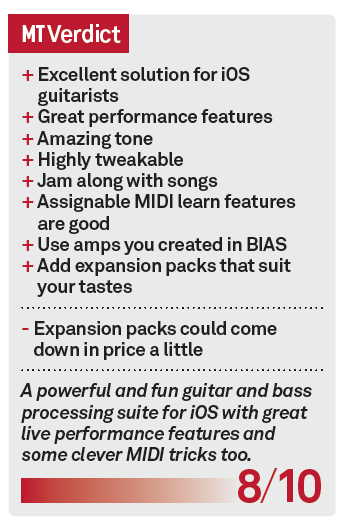