Andy Jones continues his review of the amazing Pocket Operator series from Teenage Engineering… The Differences Rather than me repeating the previous pages’ set of paragraphs for each unit, you should now get the drift for all three of the units but there are differences in use, and, of course, sound. I’ve already commented on […] 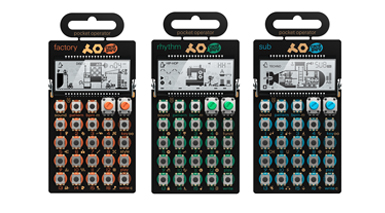 The Differences
Rather than me repeating the previous pages’ set of paragraphs for each unit, you should now get the drift for all three of the units but there are differences in use, and, of course, sound.

I’ve already commented on the surprising volume that can come from each unit in the PO series. But as well as the volume that emanates from each, you might also be surprised at how good they sound. And that’s simply down to the source material which is punchy, contemporary, dirty and, when you get those rotaries moving, surprisingly tweakable.

It’s also helped enormously with the on board effects which add a massive amount to the proceedings – not just extra sonic dimensions in heaps but also a hell of a lot of movement. Don’t think of these as ‘just’ delays or reverbs as they are very much in the crushed bit rate territory with filters at work and shuffling all over the place plus delays, crushing and distortion a plenty.

So on to the second unit, factory (so called as harmonies are created from a cargo of exotic birds in the factory – Ooohh, kaaaayyy), and we’re talking lead sounds although beats are also present, this time just on a micro drum machine on part 16 of the sequencer.

This is the crucial difference between the lead (factory) and bass (sub) units over the rhythm unit. On each melodic Pocket Operator there’s more emphasis over the key of the sound and length of the note played, – you effectively get one big melodic part and track 16 just dedicated to beats. You highlight which of the 16 parts plays the melody and then you adjust its pitch and length by holding down the sequenced part in Write mode and adjusting the left rotary for pitch and the right for note length. So you can easily create changing riffs as the 16 parts cycle.

Best not show one to your dad. He’ll think it’s not finished…

It’s a slightly different way of creating than with the rhythm unit but you soon get used to it. And as the symbols come into their own (and it’s really worth learning to match colour to code) so you start shifting and selecting at some pace. This will also keep your mind from wandering too much to the screen and wondering what it all means… (Yes, I know: building site, crane, obvious!)

The sound of the factory unit is just as cool and contemporary is that from rhythm, and if you’re going to buy just one you could argue that this should be it as it ‘does’ every sound. 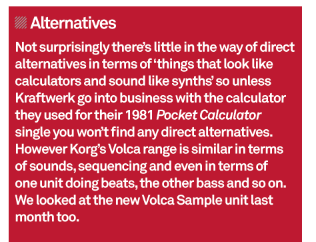 Finally we get sub which is, as the name indicates, more about bass than anything else although, again as with factory, part 16 offers the micro drum set of 16 sounds so, again, you get beats and notes. Programming this one is identical to factory with note pitches and lengths determined by the rotaries and the emphasis on the main melody, only this time it’s more about sub sounds (hence the submarine on screen!) than leads. It’s proper squelchy, then, with effects lending themselves well to acid lines and plenty of variation in sound to get loads of bass line action.

Again, with all three units, it’s worth emphasising that you get both melody and rhythm parts, it’s just the emphasis obviously leans depending on the unit you choose. Which leads nicely to…

Teenage Gits
You could argue that the PO Series is a set of gadgets that is achingly trendy and, as such, exists in a particular time and place in music production that will quickly pass. You could also argue that part of this ‘cool’ actually comes by way of them simply being unfinished which, in turn, comes by way of keeping costs down. So cheap = cool – shabby chic for today’s producer, in gadget form.

Once you get the hang of the symbols and LEDs around the keys, you might not need to use the main screen. Which is probably just as well as this one has a picture of a crane on it for some reason

You could also argue – and hey, stop being quite so aggressive why don’t you – that the pictures on the screen put fun before function, and if you really want to push things, that the unfinished nature of the beasts means that they are exposed to the elements – you can’t be too rough with them…

And had you met me a few days ago, before starting this review, I would have endlessly spouted all of those arguments to you, . But, with the benefit of hours playing with them, I admit now that that stance would have made me look slightly (ok, very) middle-aged and bitter. Perhaps revealing a little too much that I’m not particularly happy that today’s music producer has it so easy. (“In my day it was half your student grant on a Roland D-20, and that was it! etc etc.”)

But I have to say I’m a convert. All of those arguments above still stand, yes, but each and every one of them is countered by not one but three positives: these units sound fantastic, they are incredibly fun and, more importantly than anything else, they are as cheap as silicon chips. So as much as it pains me – and it does in a middle-aged kind of a way – I’m left with no choice but to bestow just about every award that MusicTech can muster at the damn things. 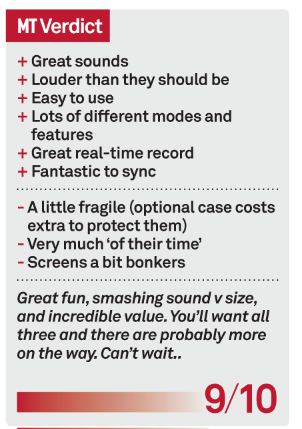