Combining impeccable sound and unmatched musical flexibility to produce truly distinctive character and quality, Unisum is a compressor like no other. 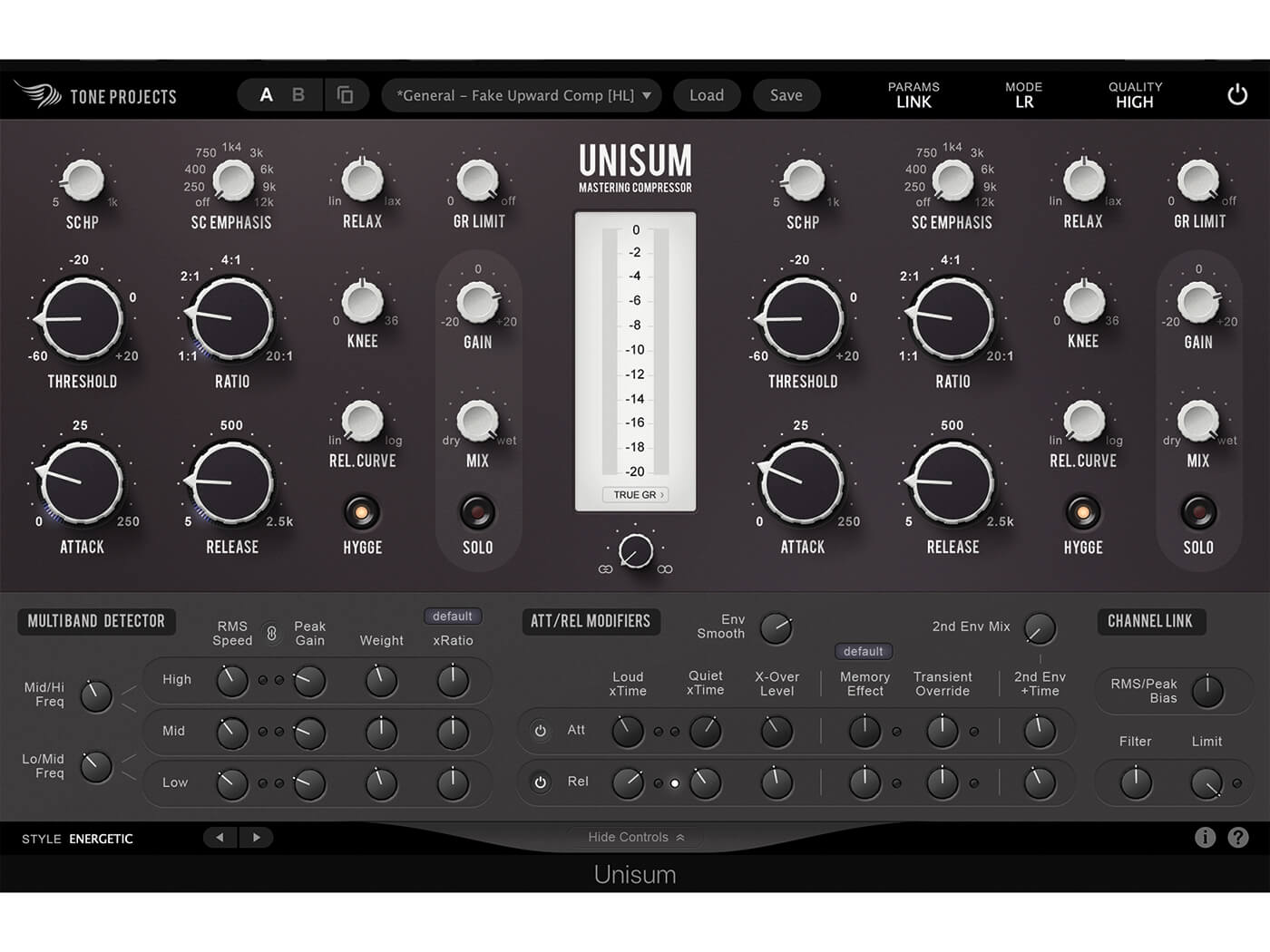 Established in the early 2000s by Rune Lund-Hermansen and his team of talented engineers and DSP specialists, Tone Projects has become renowned for its audio quality. This new mastering compressor is preceded by three stellar products: BassLane, Compadre beatpuncher and Sonitex STX-1260, all of which have become firm favourites with producers searching for hefty software processing.

Unisum, though, is something different – and more innovative. Imagine rolling the features of all the world’s finest mastering compressors into one and you’re on the right lines. Unisum is fully adaptive to any track and boasts capabilities that cannot be replicated by any other compressor. Let’s unpack it.

According to Tone Projects, one of the central ideas behind Unisum is that “every song is different and no mix has the same ups and downs”. With this in mind, the Copenhagen-based company went about designing a mastering compressor that embraces the complexities of modern mixing and mastering, putting the creative control of dynamic shaping directly into the hands of the mastering engineer. This is a tool that responds precisely to your ears and emotional understanding.

It merges tone, dimension and groove, and even though it’s an extremely deep plug-in geared towards professional mastering engineers who will revel in its features, it can still be used by more modest engineers too. That’s what we love about Unisum –  it can be used to make surface-level decisions or more in-depth ones. It’s capable of amazing sounds after merely tweaking the parameters on its main GUI, some of which are unique. With the helpful tips function enabled and the detailed but simple-to-use manual at hand, however, you can embrace its more expansive features with confidence. 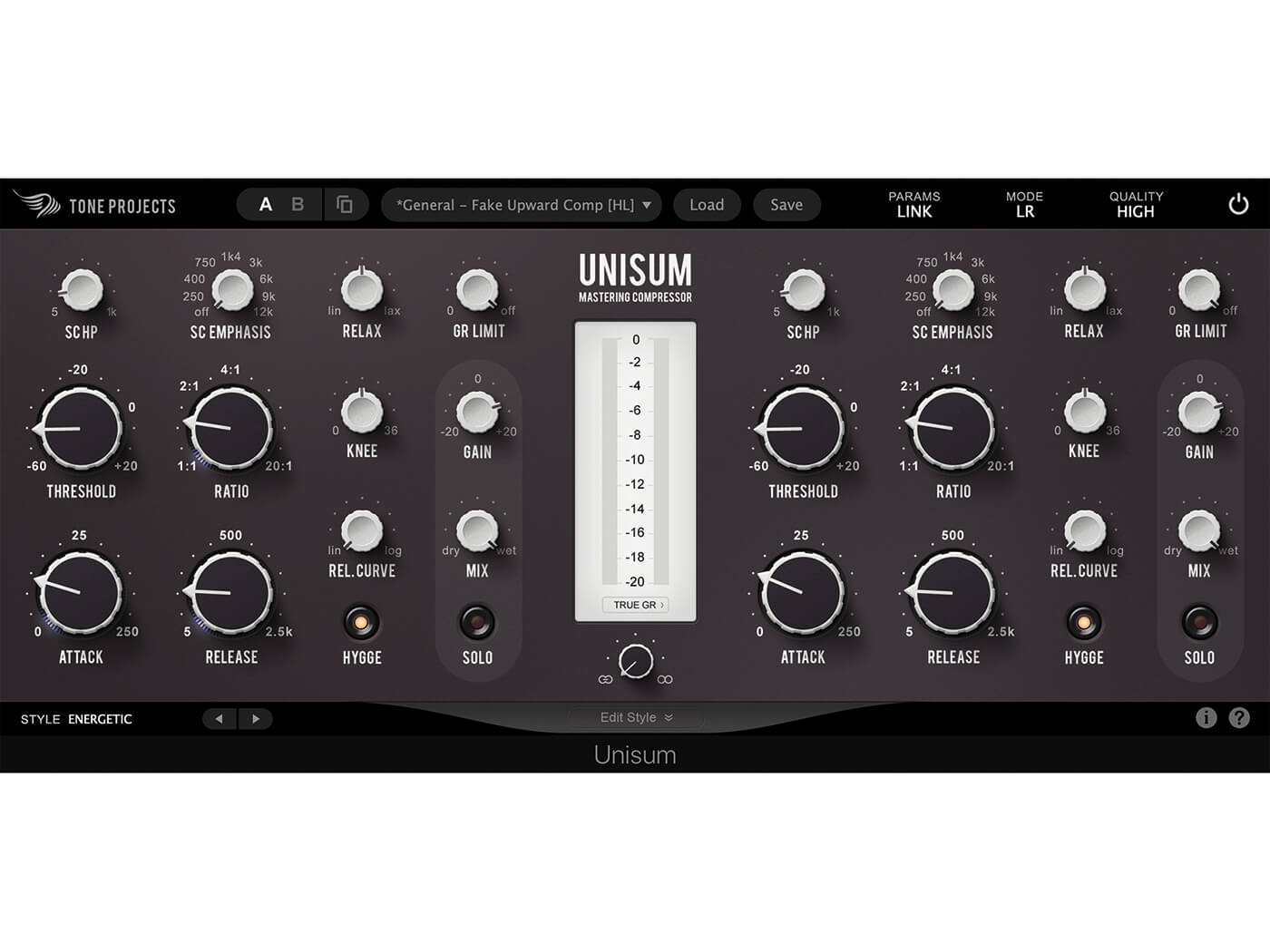 Unisum is a two-channel compressor capable of operating in either Stereo (LR) or Mid/Side (MS) mode. Both modes allow either fully linked, partially linked, or completely separate processing of each channel by using the continuously variable channel or parameter link controls, which also include filter and limit features. When designing this, the team at Tone Projects looked to focus on sound. They wanted a transparent and clean compressor through which users could add character by way of Tone Projects’ own Hygge button or by increasing the colour via fast settings for the RMS detector. The result is a very organic sound.

The Hygge circuit offers a warmer and thicker sound by subtly altering harmonics, transients and frequency response. It contains several stages of frequency and level-dependent saturation, with filtered feedback also available. These are inspired by the transformer and tube characteristics of high-end hardware compressors.

The processing of sound and particularly oversampling within the compressor is based on three quality settings: Realtime, for zero-latency and low-CPU usage, but not best suited to Hygge mode; High, for low aliasing and balanced CPU usage, ideal for most applications; and Pristine, for superior-quality alias-free compression that’ll eat away at your CPU. 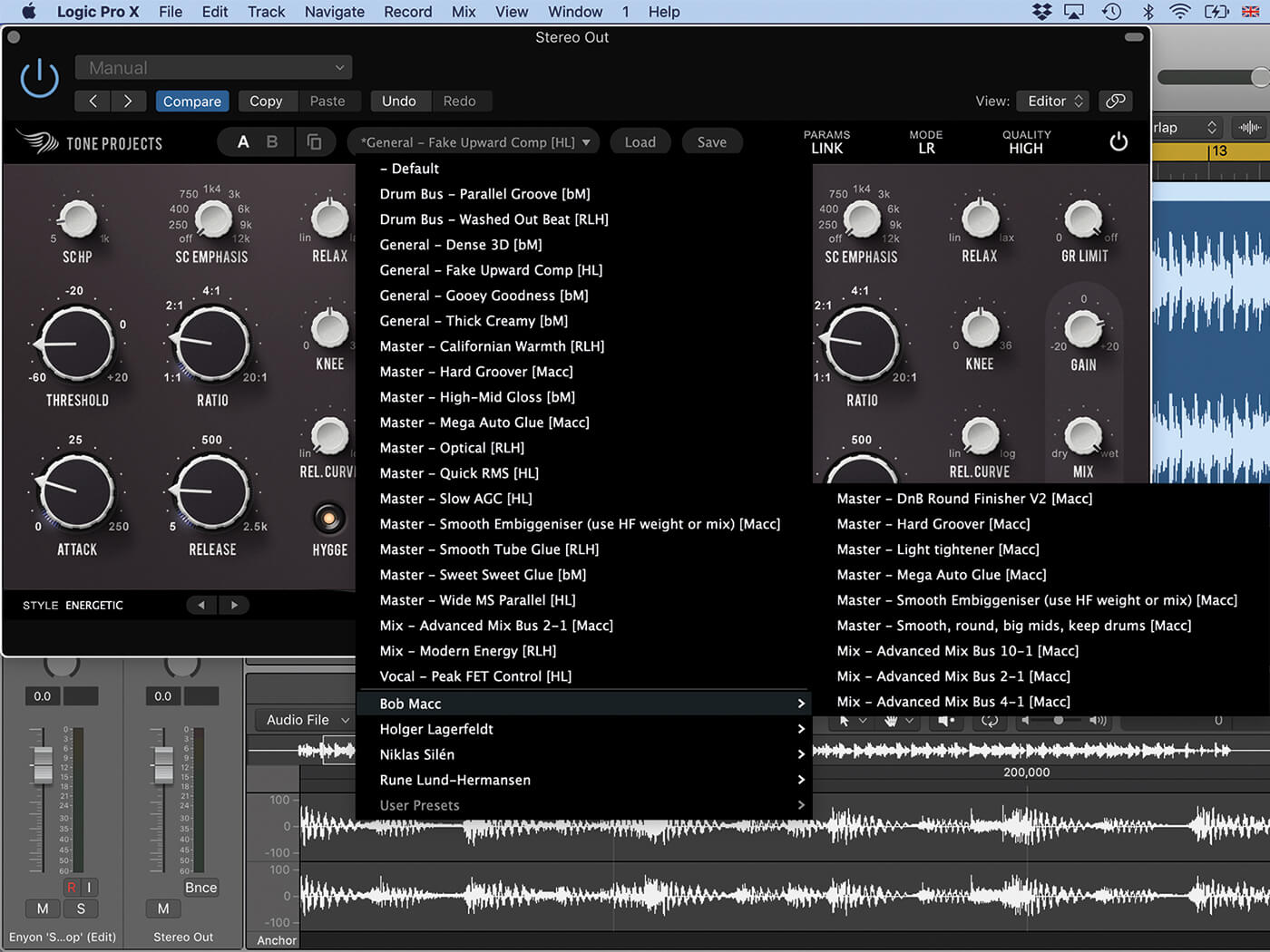 Far from the mastering crowd

What makes Unisum stand out from the crowd is its unique and detailed control sections that empower users to make decisions. Each channel on the main GUI sports threshold and ratio controls with neat features. For example, when using SC Emphasis (sidechain) combined with the Weight control, you can set up frequency-dependent thresholds. Unisum reacts beautifully to these, and the function can almost be used as a de-esser.

The SCHP sets the frequency of a 6dB/oct high-pass filter on a sidechain signal, a brilliant function for reducing low-frequency pumping. The Relax and GR Limit controls work well with each channel’s ratio to reduce maximum gain reductions, smoothing out transfer curves in the process. We love the new range control between linear and logarithmic release curves too – and not just because it’s never been seen on a compressor before.

At the bottom of the GUI, there’s an expandable section for those who want to explore the advanced parameters. In this area, you’ll find a set of built-in styles (presets) that change the parameters in the Style section, providing quick and easy starting points that can be adjusted later.

The attack and release functions are further enhanced in the Modifier section. This is primed for tailoring the A/R envelopes to the unique needs of your track or to carefully add an extra sense of movement and energy without hyping the sound too much. Using RMS speed and peak-gain functions when adjusting A/R helps control the speed and sensitivity to signal changes. The release-curve function also provides a balance between energy and smoothness, with the Modifier section fine-tuning how the software reacts to different levels of compression.

The additional controls in this section also allow users to apply further functions not seen before in other compressors, such as controlling A/R curves with the Loud and Quiet Time functions, and controlling the crossover points between the curves with the X-Over Level control. The A/R Modifier section also features Memory Effect, which modulates A/R times based on compression intensity, and the transient-override function, which overrides A/R time on transients by compressing at a different time to the other material present.

This unique A/R Modifier section includes a second envelope too, with mix, time and smoothing functions. This slower envelope runs in parallel with the main envelope, and can yield snappier or smoother compression with slightly different timings, if required.

The Multiband Detector section is split into three frequency bands, offering separate RMS and Peak detectors from which the loudest signal is used. The RMS detector’s speed is variable and, while it can be very fast, it is typically used in a fairly slow setting to track the average and perceived loudness of a signal. In contrast, though, the Peak detector is fixed in a very fast configuration, which makes it effective at catching transients. Using both in tandem produces flexible signal-level detection.

The useful low-mid and mid-high frequency settings enable 12dB/Oct crossover frequency between the detector bands, with no phase-shifting or distortion, which helps tailor the compressor to any material. Unisum is a reliable and near-perfect tool for tone-shaping and solidifying your tracks. 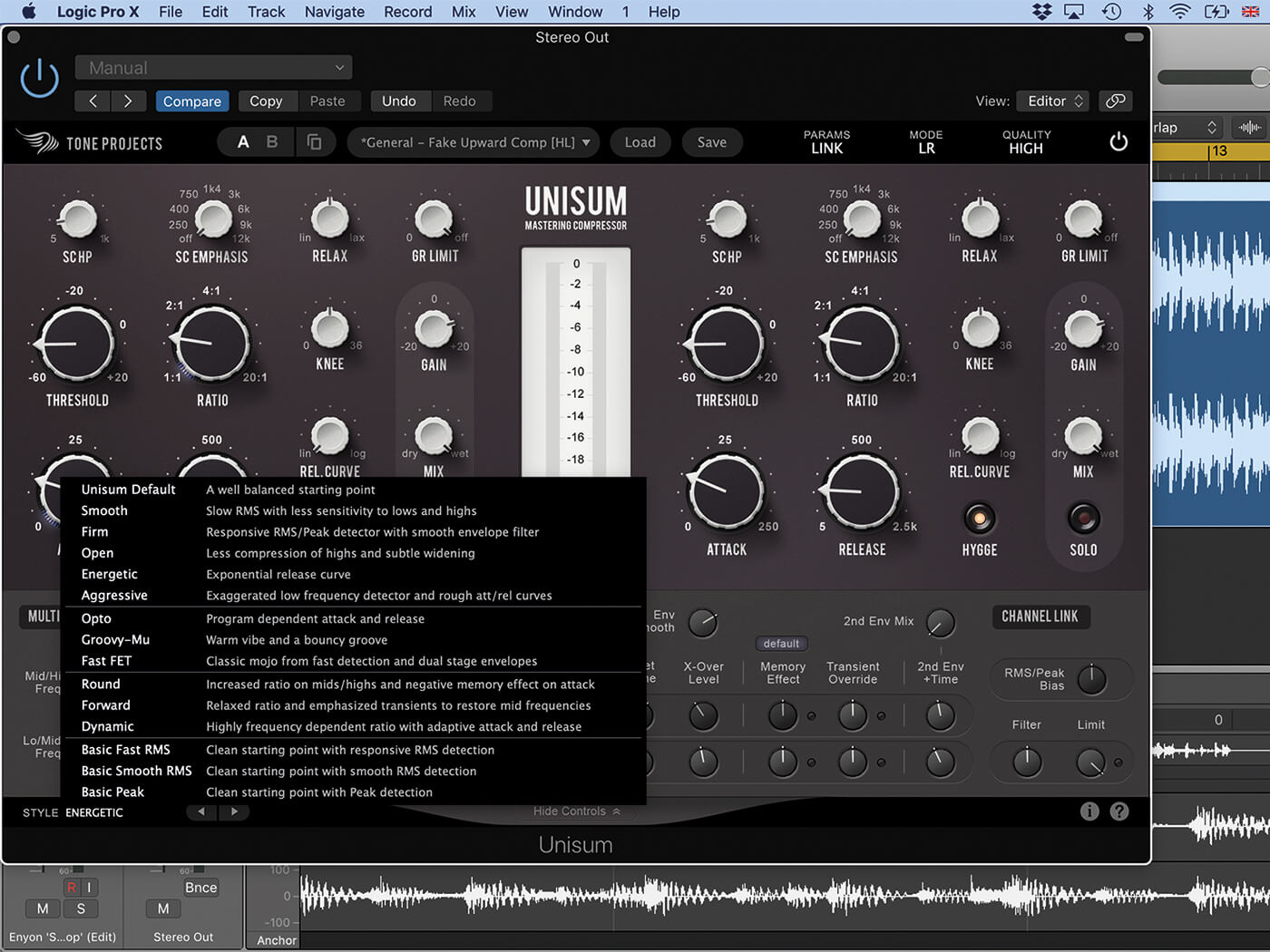 There are many mastering compressors on the market and you may already have a few favourites. The features found in Unisum, however, mean it’s unique and should be highly desirable by comparison. Let’s face it, when you have the likes of Bob Katz, Stefano Pizzaia and Holger Lagerfeldt endorsing a product, you know it’s something special. If you’re going to spend money on a DSP compressor this year, this has to be it. 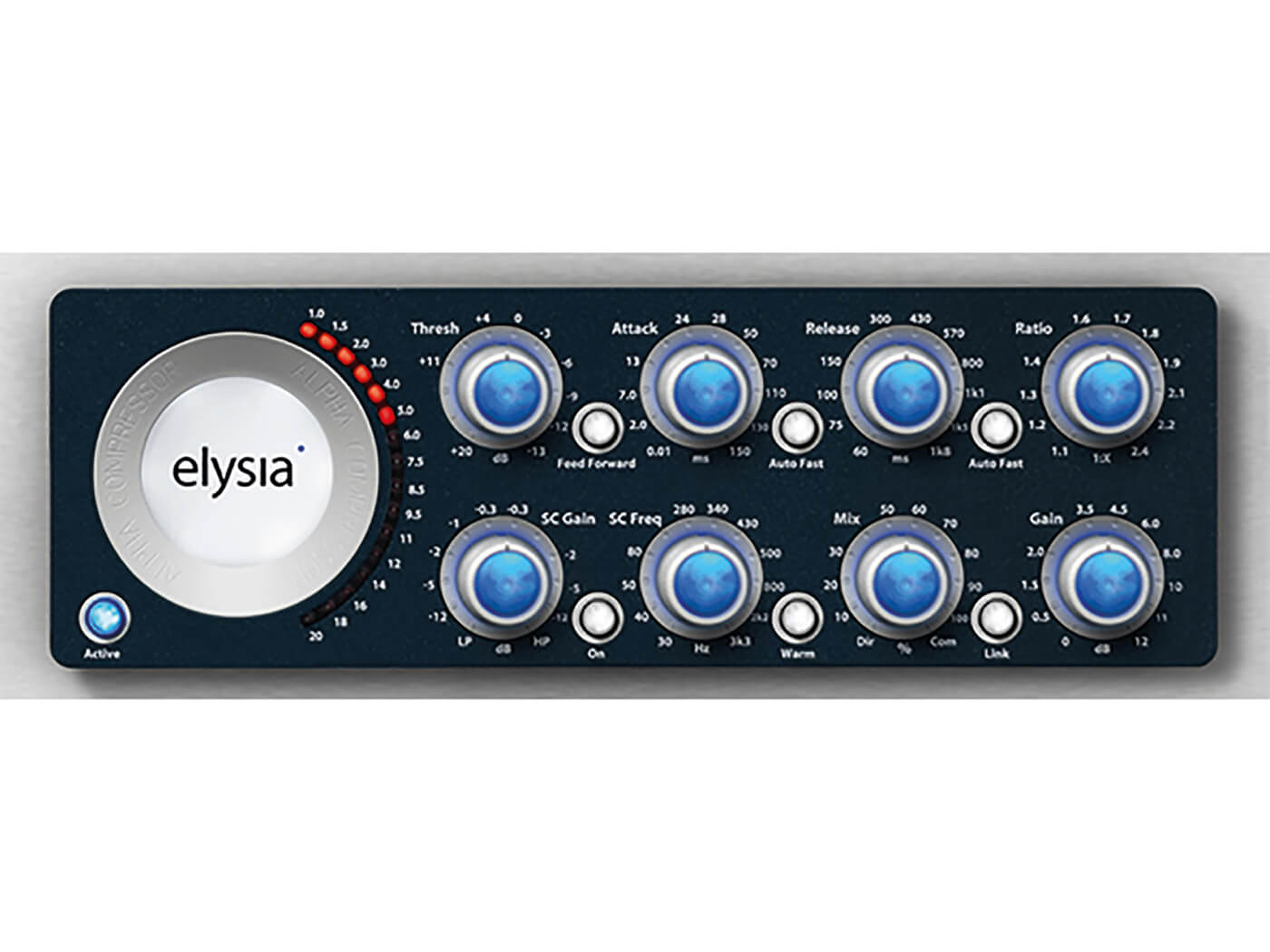 The closest alternative in both price and features, this analogue M/S mastering compressor is an accurate emulation of the popular high-end hardware version. It’s able to retain the character of your source material even when extreme compression settings are applied, and boasts frequency-targeted controls. 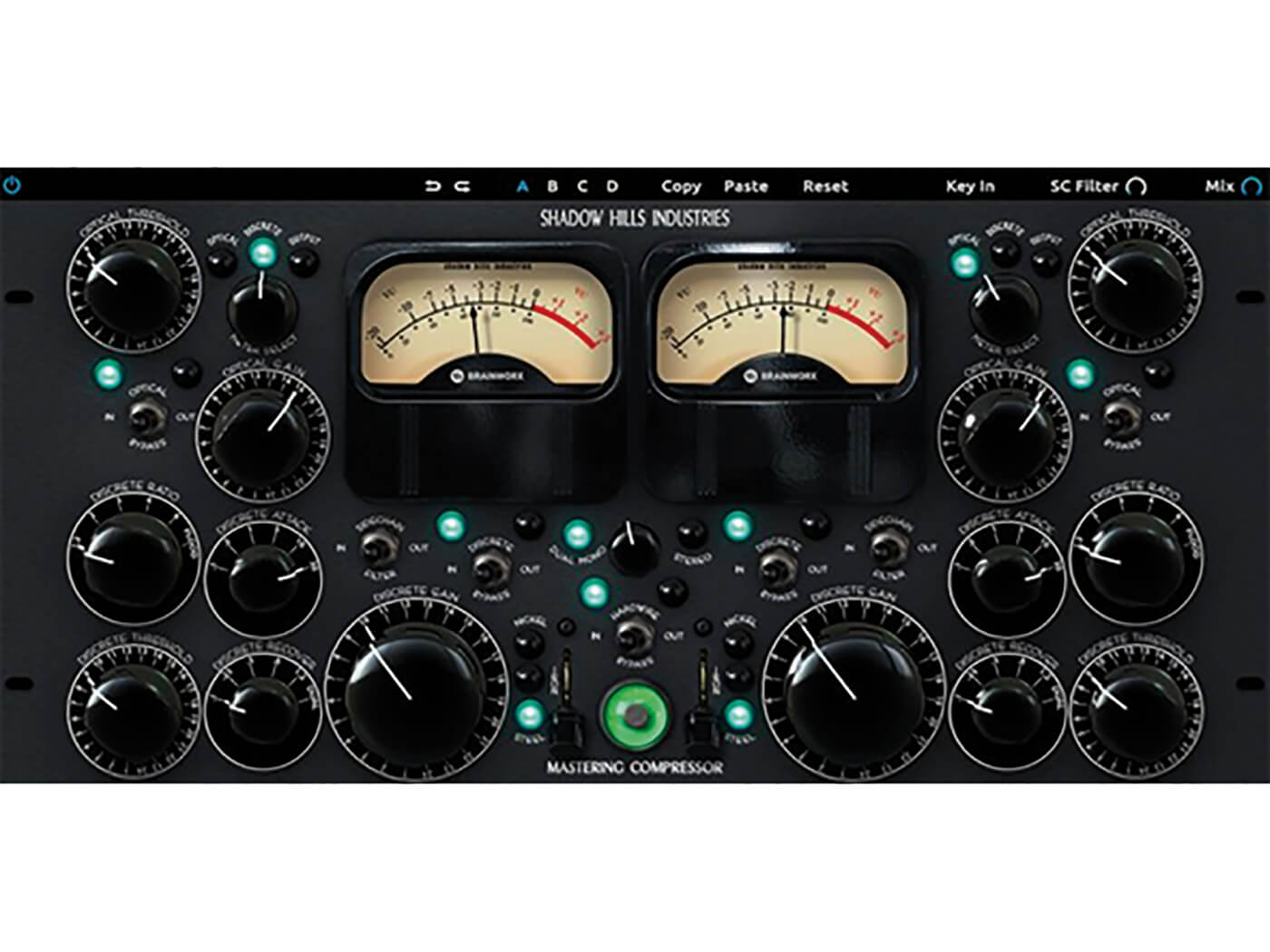 More expensive than Unisum but with similar functions, this mastering version is considered by some audio pros as the pinnacle of the Shadow Hills sound. The software includes separate optical and discrete compression sections for the use of two-stage compression techniques.