Shimmering drones and exotic pads are close at hand thanks to this Baltic-inspired expansion from cinematic specialist Sonic Atoms. 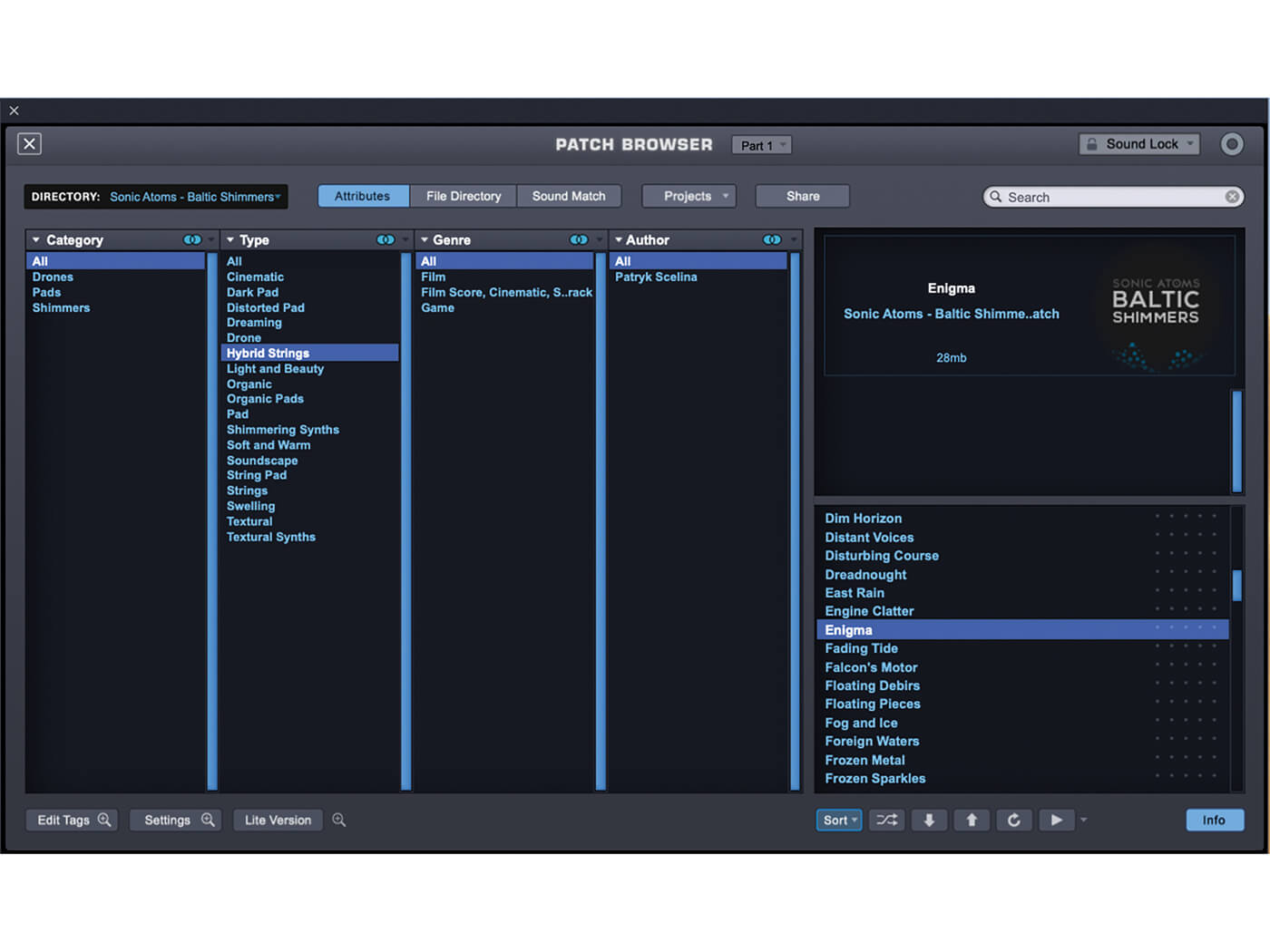 Spectrasonics’ flagship Omnisphere synth is renowned for exotic samples, including everything from mainstream instrumentation to the infamous Flaming Piano sample set. Thankfully there’s nothing so sacrilegious in the latest release from cinematic sample specialist Sonic Atoms, which provides Baltic inspiration in the form of this Omnisphere expansion.

Omnisphere allows users to program and tweak patches, and create new ones using the onboard sample content. But it’s the ability to load samples from original sources, including new audio content released by Sonic Atoms, that makes it truly special.

The patches here are mostly pads and drones, and much of the sample content trades on organic and natural sources, from bird calls to the sounds of the sea. There’s also content from an electric cello and ukulele, both providing tremolos that have been treated in a number of ways. Many of the samples were recorded to tape before being slowed and recorded digitally, some featuring  creative and outboard effects processing. This explains why many of the samples and patches can take a while to build or unravel. It’s this that is the core concept of Baltic Shimmers: interesting drones, pads and shimmers that sport a genuine sense of depth and movement too often missing from typical usual synth-drone line-ups.

Omnisphere’s file hierarchy makes light work of finding your preferred sound. Baltic Shimmers should appear in the user directory. Providing the aforementioned subcategories Drone, Pads and Shimmers, the hierarchy breaks down further to give additional clues about the nature of each sound. This also extends to genre, which are weighted towards film, TV and videogame styles of production.

The quality of the produced material is slightly darker than we initially expected. There’s a beautiful presence to each and every sound in the lower-mid range, which lends many of the patches a brooding flavour, and doubtless comes courtesy of the vari-speeding of the tape during the sampling process. Even the sounds within the shimmer category don’t feel overly bright.

Most of the patches take a while to get underway, and have extended attack phases. However, it doesn’t take much effort to adapt the envelope, after which many of the sounds can be repurposed to provide useful resources for alternate settings. New sampled content always invites experimentation, and there’s no shortage of superb source material here.

Many of the patches are extended in timing, which means that, while they take a while to unravel, they don’t suffer from any repetition. Many of our favourites from this library modulate while offering a beautiful sense of foreboding. One such patch, Northern Mirage, offers an eclectic mix of harmonic colours, with modulating elements in both filter and amplitude. It’s discordant but beguiling, the only danger being that, from a producer’s stance, there might be a little too much harmonic content here for this patch to be easily inserted into a mix. This makes us think that these intense colours may provide their own backdrop, without the space for many additions, and requiring filter or EQ to create further mix-space. 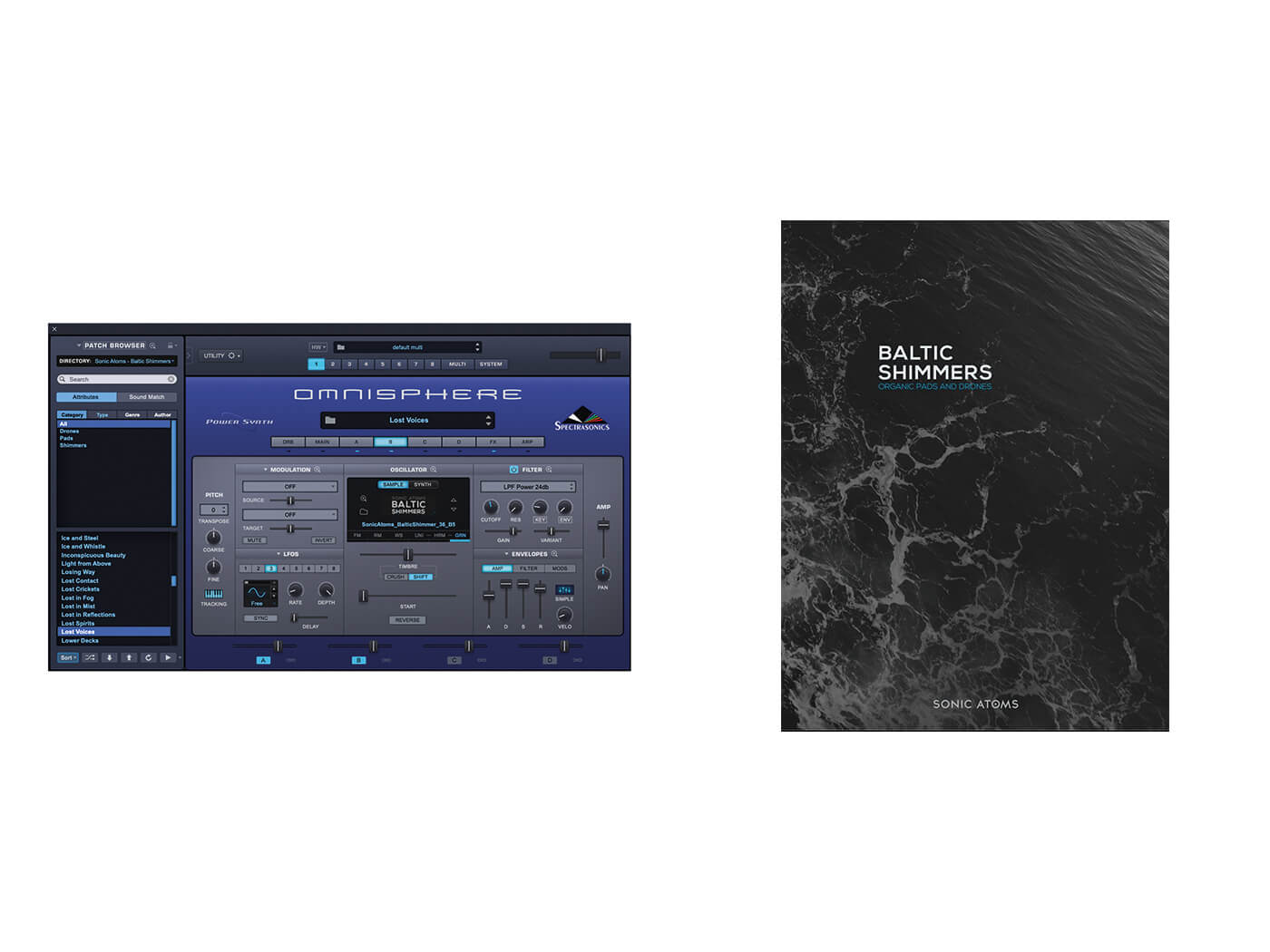 Baltic Shimmers is a classy product and a worthy addition to any Omnisphere owner’s library. It’s sensibly priced, with a clear product remit: provide sumptuous pads and drones for media compositions. This does not preclude additional programming though – the amalgamation of other Omnisphere samples will extend this package’s life.

The registers of patches can be variable, with low-pitched material often presenting itself in the middle register of your controller keyboard. But that’s a minor gripe for a suite that has been assembled so beautifully during the sampling process. 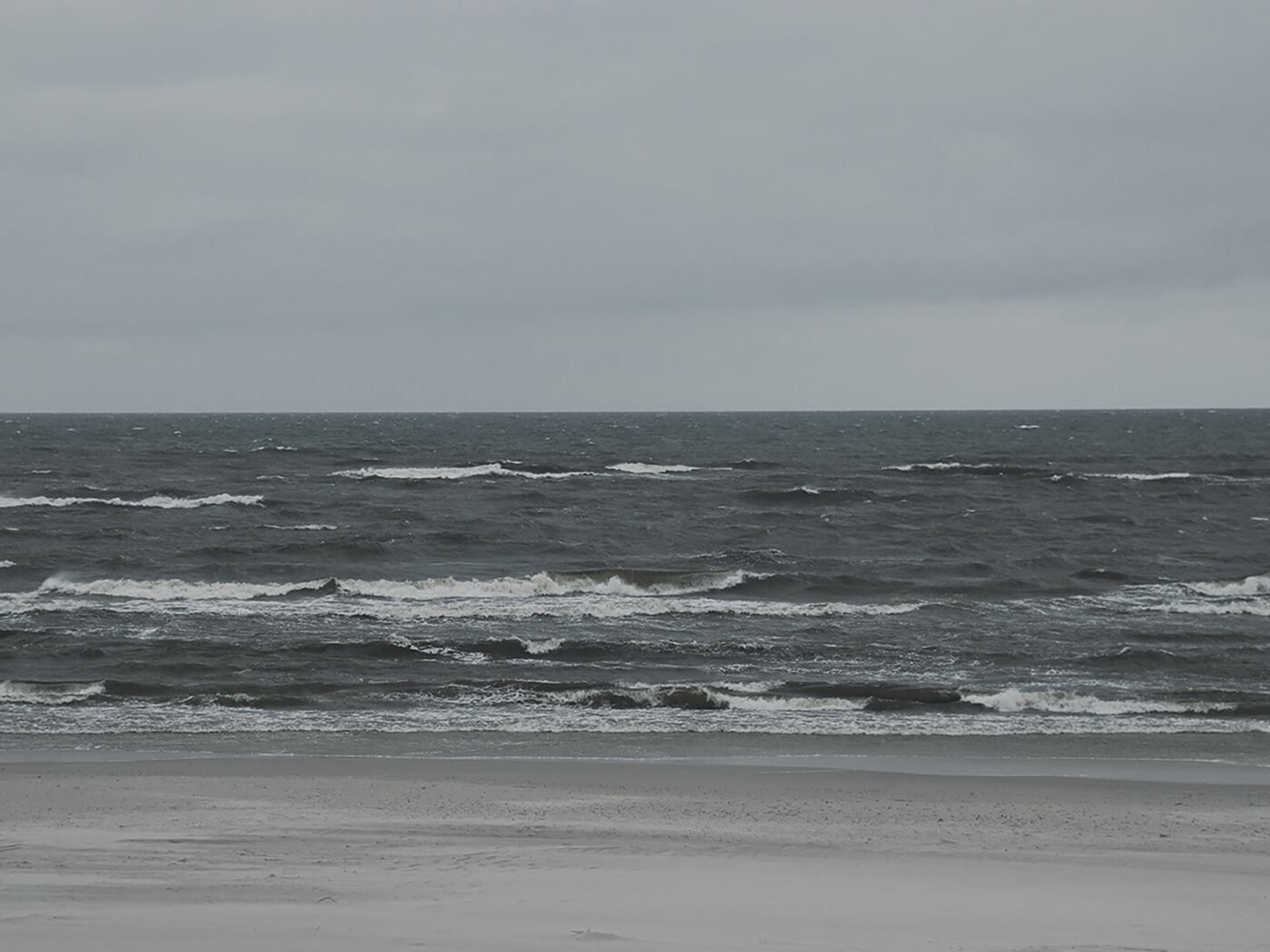 As expansion packs go, Baltic Shimmers is pretty on-message with its brief. The use of organic sampled material that has been treated to a number of colourful effect and tape-based enhancements results in a collection of drones and pads that are big on detail and interest. As an overall colour, the package feels dark but, with experimentation, while residing alongside the rest of the excellent Omnisphere content, its patches could easily be adapted for other causes and colours. It has a distinct natural feel and flavour, and provides plenty of slowly evolving pads without the more pulsating elements that Omnisphere is recognised for. 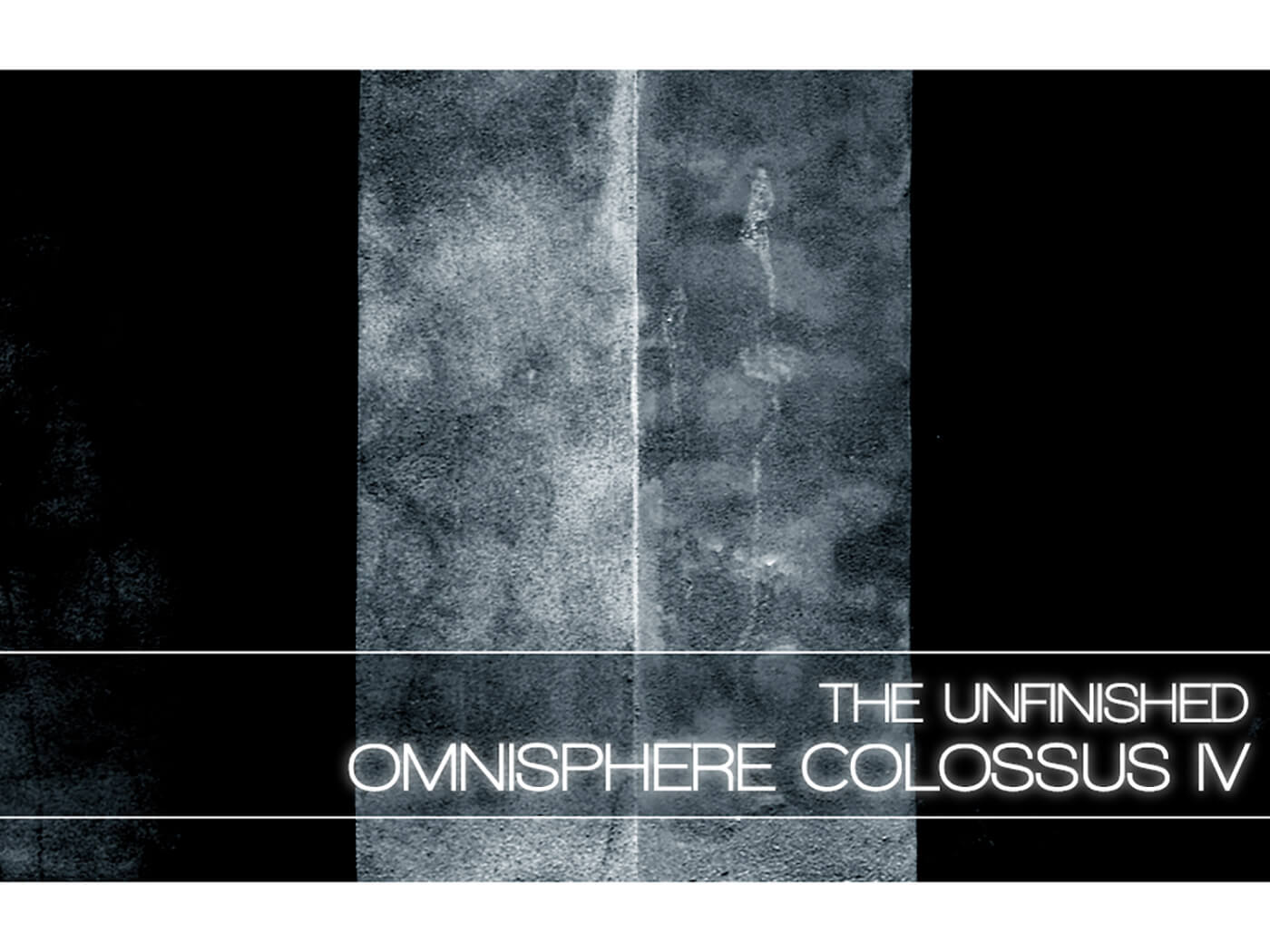 The Unfinished
Omnisphere patch and sample libraries from £20

From the studio of renowned composer Matt Bowdler, The Unfinished’s considerable collection of Omnisphere patch libraries spans many genres, with suitable representations for media, electronic music production and world music. Available as individual sets or as a bundle. 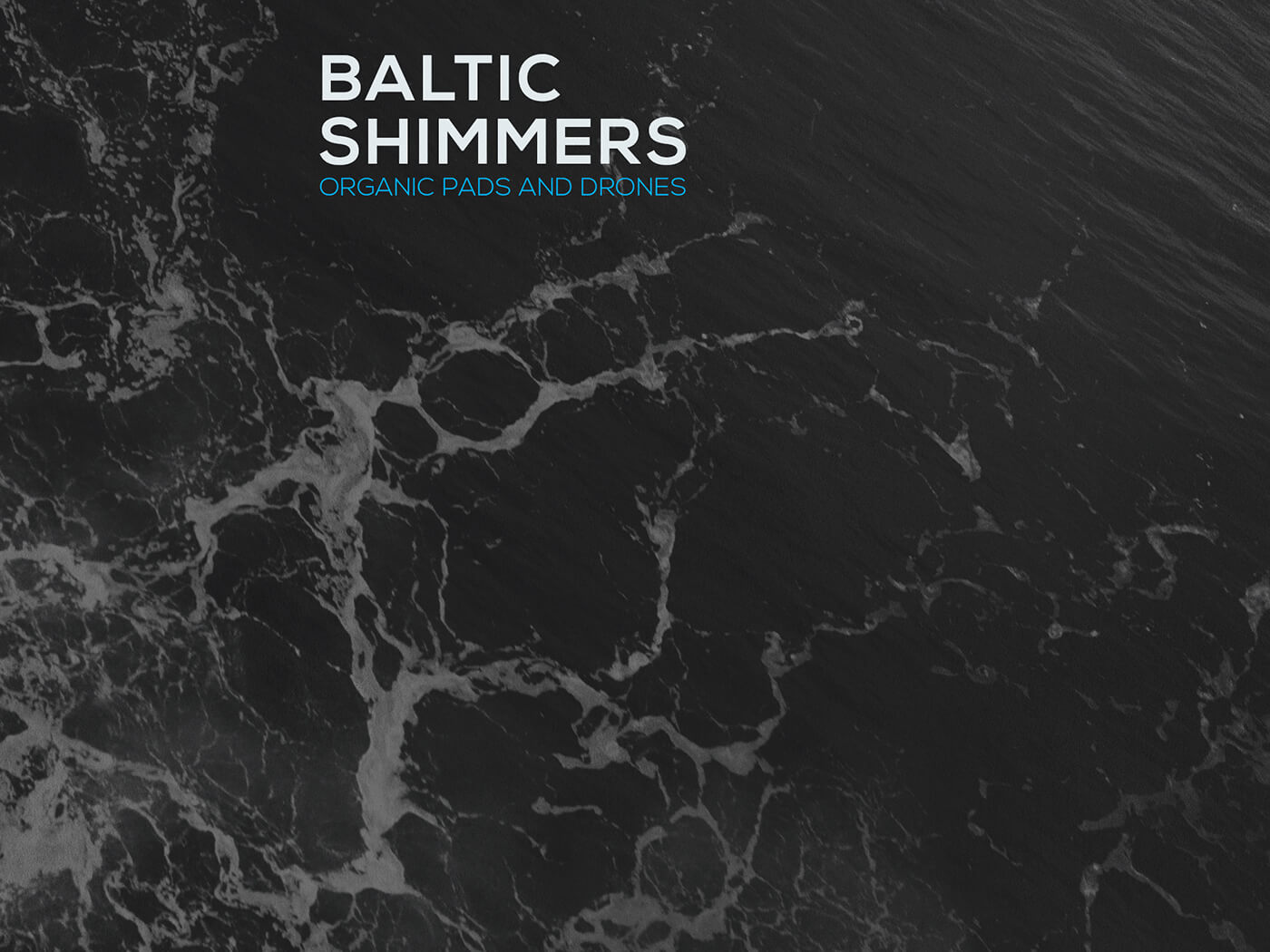 Baltic Shimmers was originally conceived for the free Halion sample player. This edition sports the same sampled content and slight alterations to the patch detailing. It’s a solid alternative if you don’t have Omnisphere.