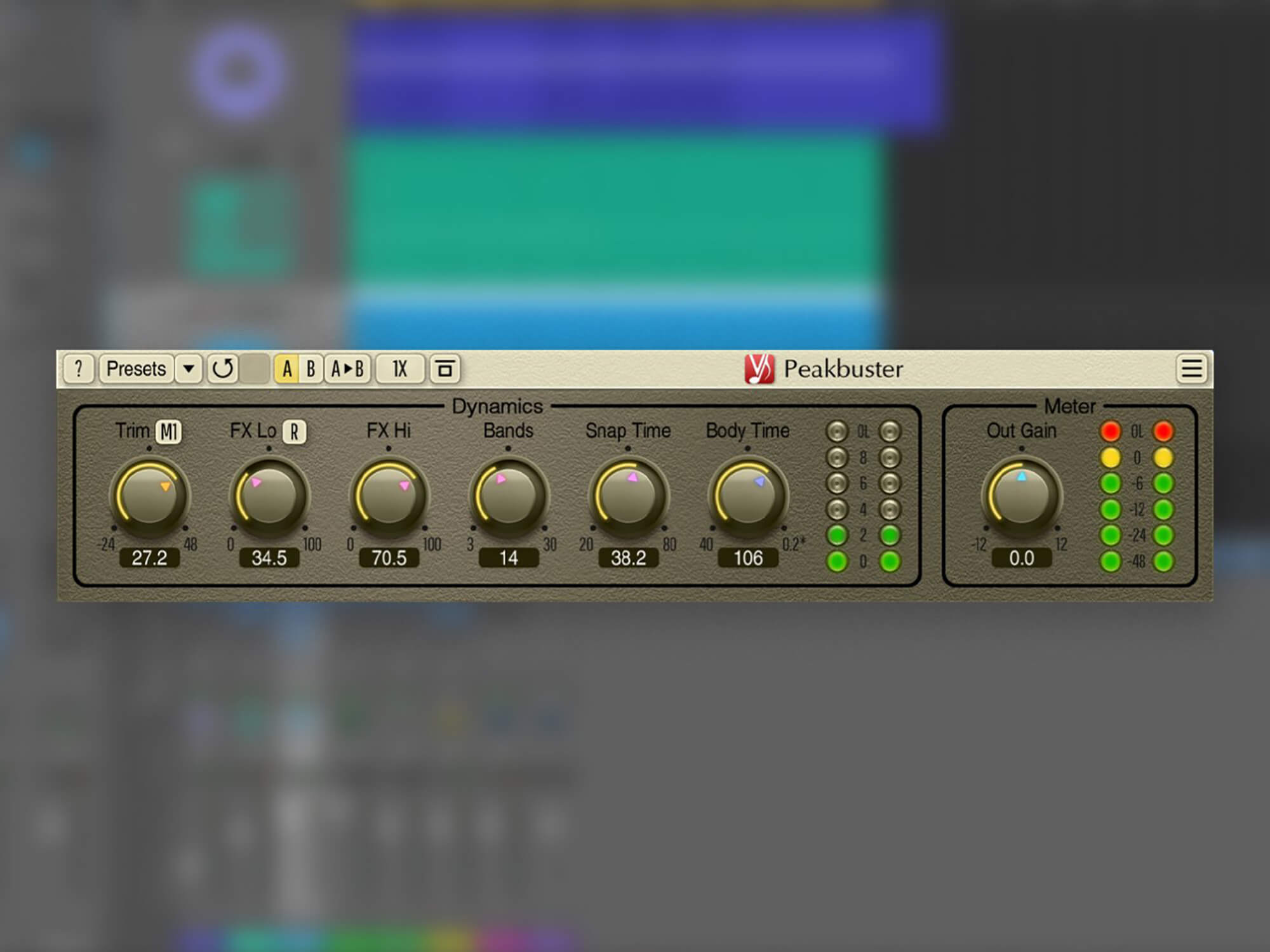 A well-designed and great sounding punch tool, that gets you decent, natural-sounding results quickly. It’s also a steal compared to the competition.

There’s no shortage of transient shaper plug-ins, ranging from simple, two-knob GUIs to complex, multi-band processors that can precisely separate your sounds. Peakbuster from Voxengo falls between these two extremes, with a concise layout that lets you quickly dial in a range of dynamic effects.

Despite the name, Peakbuster’s primary purpose is natural-sounding transient boosting, and it has a few extra tricks up its sleeves. Can this relatively modest plug-in dethrone our favourite transient tools?

Who you gonna call?

Peakbuster is technically a multiband effect that splits the signal into your choice of between 3 and 30 bands. However, the way you apply the processing is simplified into two dials for low and high frequencies, with an unknown crossover point. In practice, adding additional bands gives more detail and differentiation between the low and high elements, but at the cost of a higher CPU hit. Sometimes having fewer bands gives a more pleasing and rounder sound, so it’s worth experimenting.

There are also dials for Snap Time and Body Time, which control how much of the initial hit and main part of the transients are boosted. Under the hood, the algorithm analyses the dynamics and boosts just the right amount, but there’s also a Trim control that lets you drive the input a bit harder or back it off for a lighter touch. This is essential, as Peakbuster also adds pleasing harmonic, tube-style distortion to the signal, and this lets you find the sweet spot for both the detection and the saturation.

A meter shows how much transient enhancement you’re adding, and a helpful R (residue) button solos the processed audio so you can fine-tune the enhancement. Finally, there’s an output control to help adjust for any volume changes.

Two for the price of one

The main algorithm is fantastic for increasing the punch of audio to help give it more definition. We have a house track that’s not quite biting enough, so we use it on the drum bus and kick drum tracks, and it manages to lift the hits out, but in a subtle and natural-sounding way. The main algorithm alone would make Peakbuster a useful tool, but there’s a button above the Trim dial that lets you switch to an ‘FX’ algorithm. This is described as a ‘spectral compressor’ that boosts quieter parts hidden in the tails. It’s a much more extreme effect, but you can also use it to beef things up where you want to add thickness rather than just transients.

Elsewhere there are a bunch of useful features such as 8x oversampling, undo/redo history, A/B comparison switching, and zero processing latency. The GUI is nothing to write home about, but it does the job, and you can change the colours and size, should you desire.

Peakbuster isn’t a tool you would reach for if you want to reign in the tail of a transient – other tools can do that. And you can get vaguely similar results using other popular transient plug-ins, but it’s much faster to dial in the sound we want with Peakbuster, and it costs far less than the competition. It may not look especially flashy, but PeakBuster is an excellent and useful plug-in tool for anyone wanting improved punch in their tracks quickly and without fuss.