Most people approach EQ as a functional process rather than a creative effect, but this new offering from Minimal Audio just begs to be tinkered with. 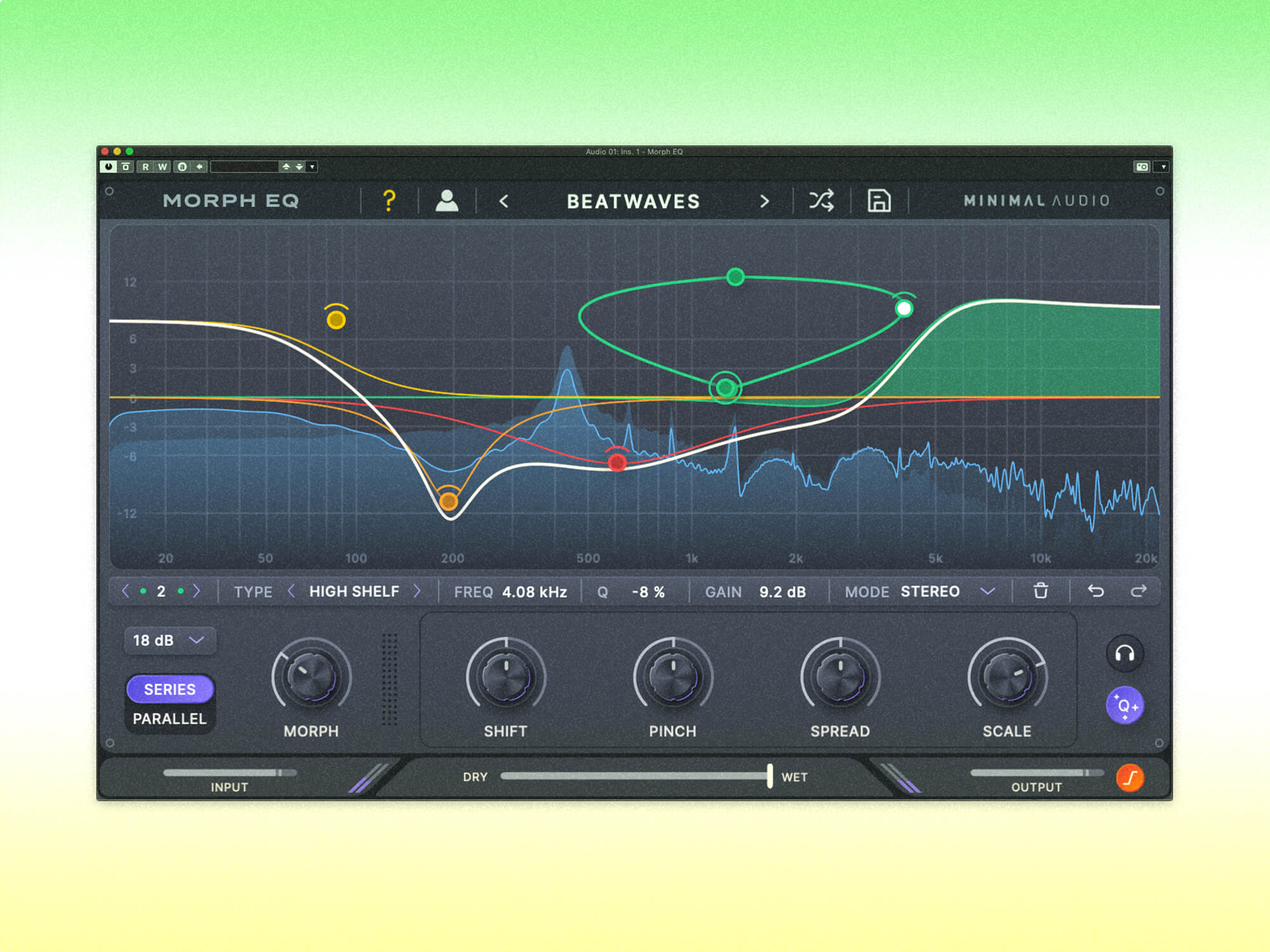 You might think of an EQ as being a single processor but, in reality, it’s a whole collection of individual filters. In the case of a classic console-style EQ these would typically be a high-shelf filter, a low-shelf filter and a pair of parametric peak filters.

Many modern EQ plugins expand on this basic recipe by packing in additional filters and allowing some, or all, of those filters to switch between different modes. The theory is that the more filters – or EQ bands – that you have, the more control and precision can be achieved. This is exactly what we find with Minimal Audio’s new Morph EQ.

There is likely to be an upper limit to the number of filter bands that Morph EQ can create but, during our review, we gave up trying to max it out at an astonishing 60 (frankly, if you need more than that, you’re probably doing something wrong!). With each filter capable of seven operating modes (high-shelf, low-shelf, peak, high-pass, low-pass, band-pass and notch), the plug-in offers a near limitless scope for shaping and honing a part or sound.

Adding and managing filters is incredibly intuitive with Morph EQ. Create one by double-clicking in the plug-in’s EQ graph view, and then adjust its settings by dragging it around in the graph. The active filter’s parameters are also shown on a strip below the graph, so you can see and type in the exact values if desired.

The graph shows a lot of detail.  It displays the colour-coded nodes and curves of each individual filter and the overall cumulative EQ curve. These EQ curves overlay spectrum analyses of both the input and output signal. This is a lot of info to display in a single graph, but Minimal Audio has done a stellar job of ensuring the different elements stand out from each other and are easily legible.

Each individual filter operates in stereo mode as standard, even when the plugin is inserted on a mono track – the plug-in is not mono-aware, but this is not a significant issue. But a pleasing addition here is the ability to target a filter at a specific channel of the signal – left, right, mid or side – which adds an extra layer of flexibility, albeit at the cost of additional complexity.

Notable in its absence is any means to bypass a band. If you want to hear what your EQ setup sounds like without any given band, you have to delete the band altogether. Although this is inconvenient, the plugin has an undo and redo system, so you can at least step back and forth to compare the difference. Minimal Audio has also handily included an A/B system, so you can copy settings from the A setup to the B setup (or vice versa), make adjustments and then flip back and forth for comparison.

At the global level, Morph EQ can arrange its filters in series (as they would be in a conventional EQ) or in parallel, which can give some very interesting results, especially with the -pass filters.

If this was the extent of Morph EQ’s abilities then we’d be rather impressed, but what of all this morphing business?

Any EQ plug-in can have its parameters automated, and so can be used to create filter sweeps and other tonal movements. However, setting up multiple automation curves to manage multiple bands of an EQ is painstaking work, and any subsequent tweaks or adjustments would be similarly fiddly and time-consuming. Unless, that is, you’re using Morph EQ.

Each filter you add to a Morph EQ patch can have a morph path added to it, which is a vector path that you draw in the EQ graph. The path works much like the automation in your DAW, with lines drawn between control points that you define, and the ability to adjust the curvature of those lines. Then, as the master Morph control is turned from 0 to 100% per cent, the filter nodes traverse their associated morph paths.

Unlike DAW automation, this morphing mechanism is intuitive to configure and simple to control and modify. Its ease of use encourages you to experiment with all sorts of ideas – a many-toothed comb filter whose teeth can be spread or contracted perhaps, or parallel high- and low-pass filters that move in equal but opposing directions to create ever-shifting tone and phase changes.

Alongside the morph control are a set of four macro controls that affect all filters simultaneously. The Shift macro moves the frequencies of all bands in unison; Pinch decreases or increases the separation of bands around a central point; Spread biases the EQ towards the left or right channel; and Scale modifies the overall cut, boost and resonance of the filters.

The beauty of these macro controls – and,the Morph control – is that it makes it possible to ‘play’ the EQ,  as you may ‘play’ the controls of a simple low-pass filter as part of a synth performance. But with such deep control and complexity on offer, the results of that playing can be some truly fascinating sweeps, tonal shifts and other movements.

Sweeping around with filters can lead to some unexpectedly intense frequencies jumping out at times, which is why Morph EQ has a built-in limiter, and this has a pleasingly analogue-style character and soft clipping characteristics. Also, shelving and peak filters can take advantage of a global adaptive Q option, which modifies a filter’s Q value in response to changes in cut or boost, much as an analogue EQ would do.

Morph EQ does a superb job as a conventional static EQ, with a clean-but-not-clinical sound and so much versatility that you’ll never have to stack up EQ plug-ins again. But it’s when the morphing and macro features are employed that the plug-in’s creative potential goes through the roof. Never has an EQ been so much fun to play with.