Spectral Plugins Pancz is designed as an all-in-one sound shaping plugin to control the transients, dynamics, and punch of your music. But does it work as intended – and is it any good? 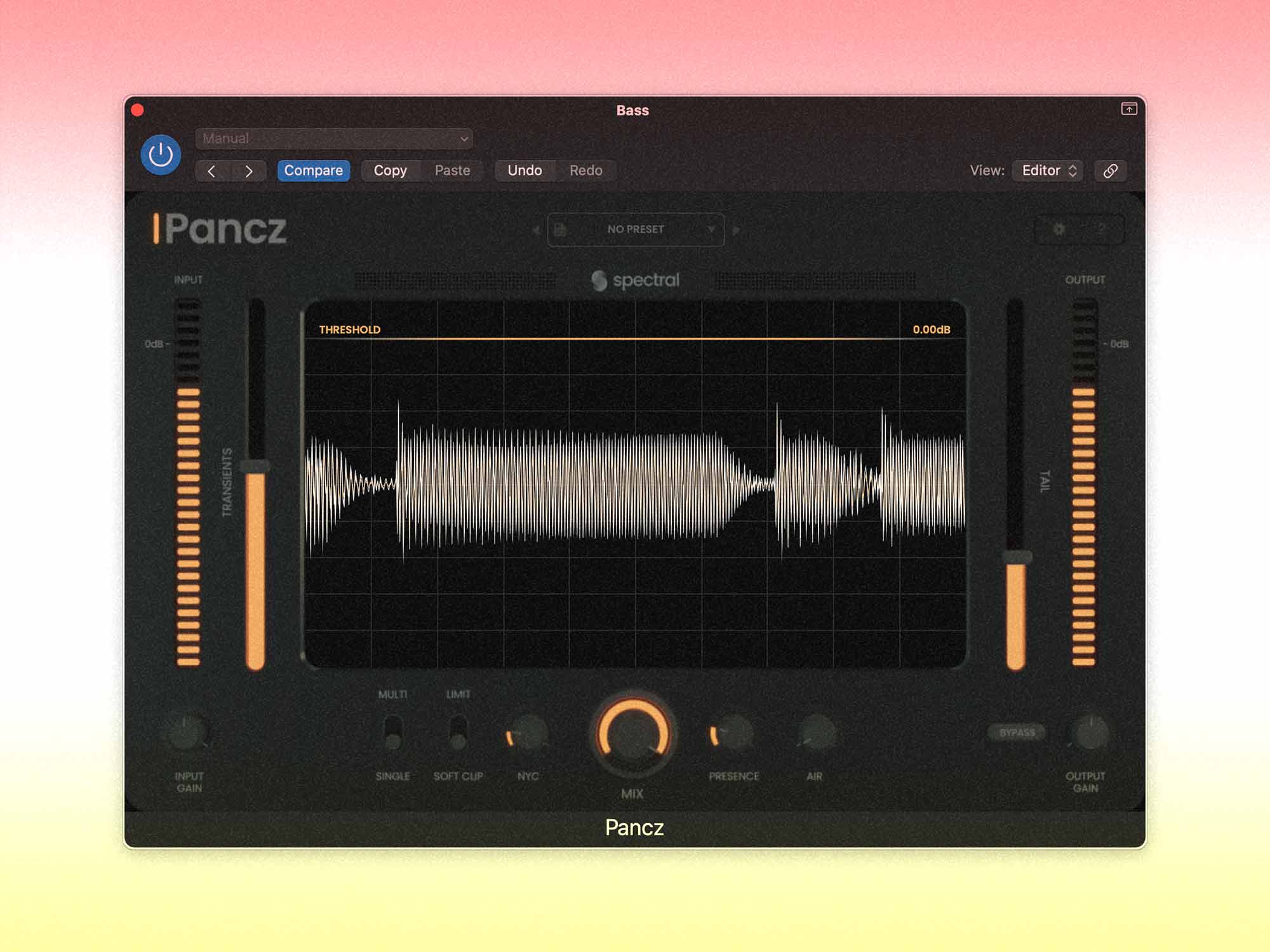 ⊖ Settings are geared to the extreme

A transient shaper affects the dynamics of different elements of the envelope of a waveform – normally the attack and tail (a combination of the sustain and release) of a sound – and Pancz does that. But it also does quite a lot more.

The first sound to explore Pancz seems like an obvious choice – drums. The transients of drums are well-defined and often have minimal natural sustain. The core controls are labelled Transients for the attack of each sound and Tail for the… er… tail of each sound, naturally. These controls function positively and negatively so the neutral position is in the middle and, at this position, will leave the sound unaltered.

Pushing the transient control upwards gives each hit a little more impact and, with minimal input, drum sounds became significantly punchier. Because the sound we are processing is a programmed drum loop with all the hits in one file, the single band was not precise enough so we flick over to the multiband mode.

The multiband mode in Pancz splits the audio into three adjustable bands to separately adjust the transients for high, mid and low frequencies. This provides much more control over the shape of the drums and allows different transient shapes for different elements of the beat. By soloing each band, you’re able to set the bands so that they essentially adjust the hi-hat, snare and kick respectively. The amount of adjustment available is significant – it’s a breeze to push the transients too far and that dialling in the right sound requires relatively subtle adjustments of the Transient and Tail sliders. 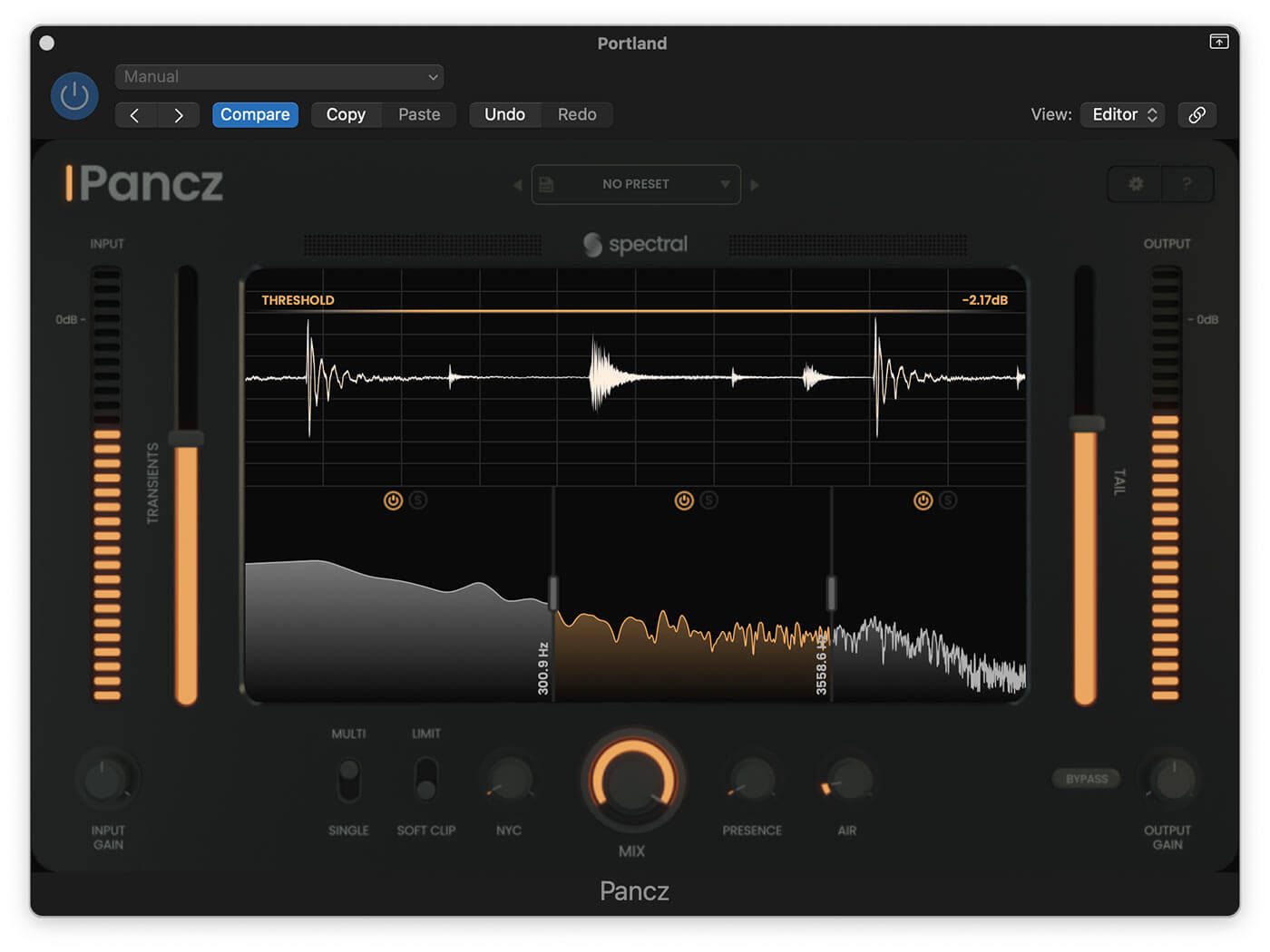 Pancz has an abundance more up its sleeve than shaping transients. It also contains compression, a limiter and some EQ functionality.

The limiter’s option to choose between soft clipping and a brick wall limiter provides two distinct forms of output. The soft clipping sounded particularly slick on the drum loop we were using but it did require pushing hard to get it to kick in. The brick wall limiter was equally as effective and, if you need a ‘pumping’ sound quickly, this is a swift way to achieve it.

The other dynamics processor is an NYC style parallel compressor. This is a single rotary knob that is presumably adjusting the threshold and ratio as you turn it. As with a lot of the functionality in Pancz, it’s powerful and even turning it up a touch has a big impact on the sound. This is useful for squashing the sound further if that’s what’s needed – but we prefer a more fully-equipped compressor for this effect.

Pancz’s Presence and Air controls apply a boost to specific frequency bands. Presence boosts frequencies between 4-6kHz and Air boosts around 10kHz. These controls are excellent for adding some sparkle to your parts – cymbals and piano, for example, really benefit from this subtle boost to these frequencies.

Spectral has created an excellent plugin in Pancz. Our main gripe is that everything feels a tad extreme and it’s very easy for multiple sounds to become crunchy and distorted. This is particularly evident from the presets – a lot of these veer into heavily saturated sounds. However, when treated with consideration, this plugin is superb and the tonal controls sound amazing. 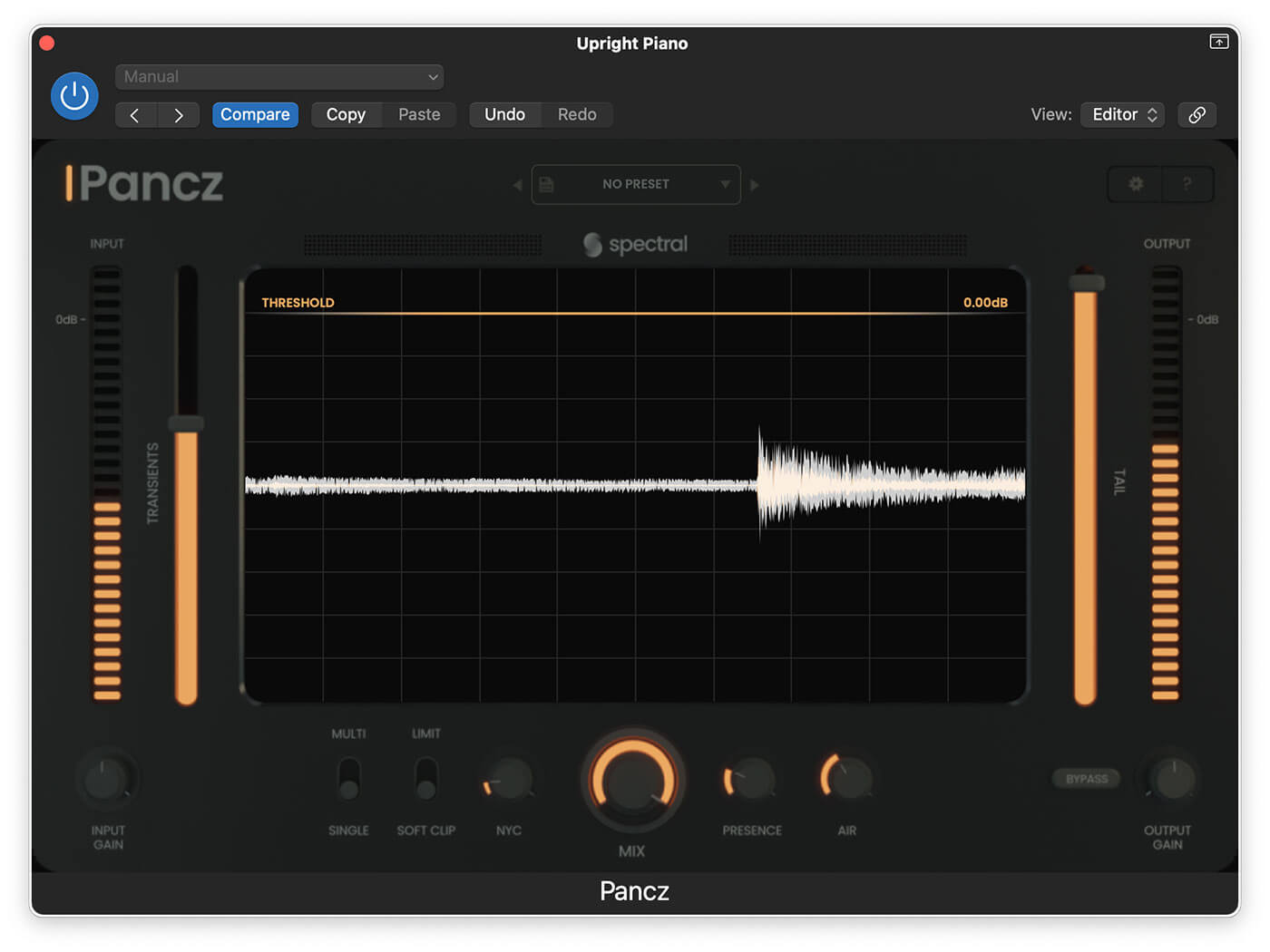