Space is the latest environment to get the iZotope treatment, with a blended triple-reverberation engine, a host of under-the-hood controls and a fluid learning curve. 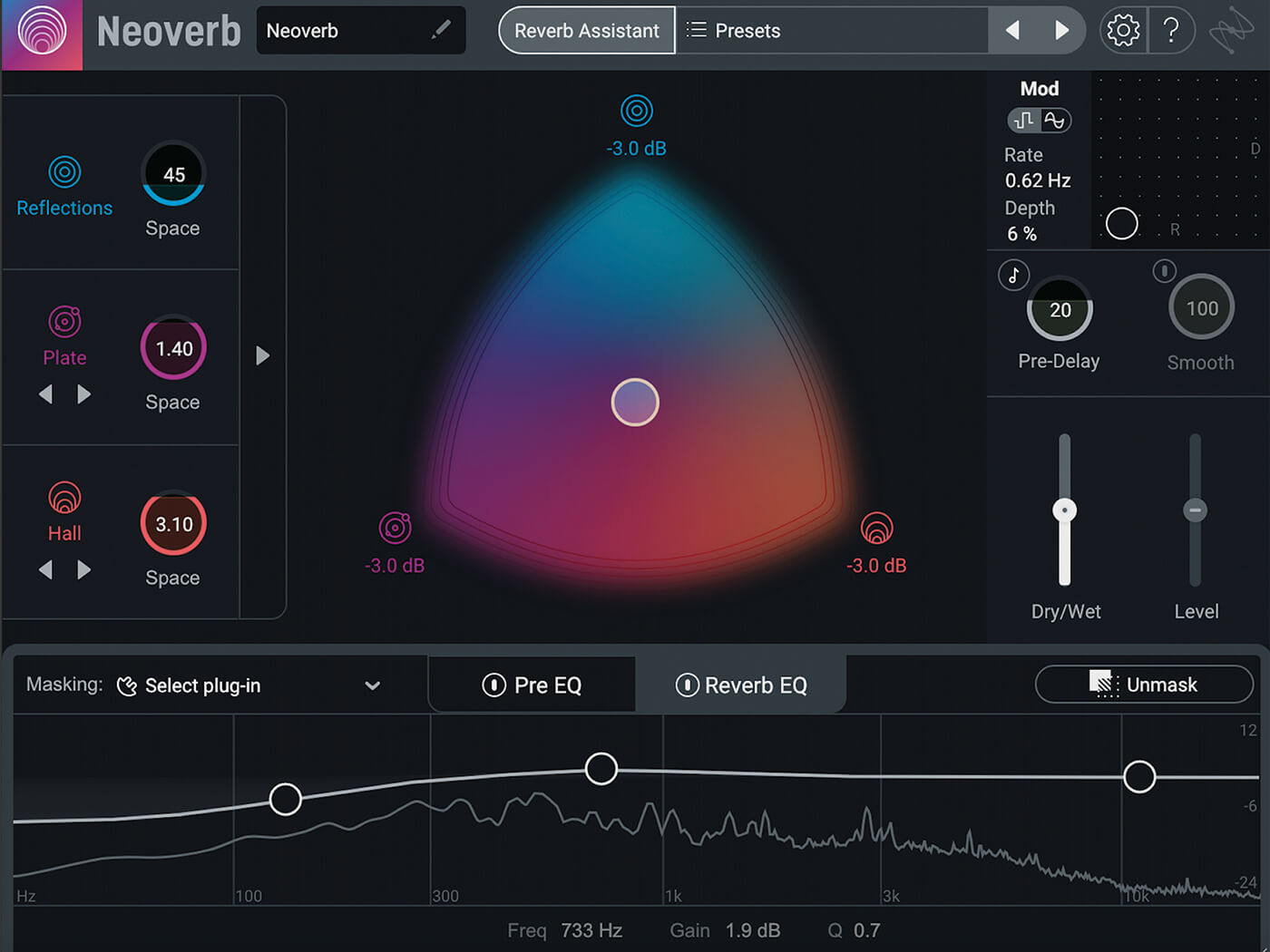 This is iZotope’s first full reverb outside of its Exponential Audio imprint and, as we’ve come to expect from the Massachusetts-based company, it feels both familiar and new. There’s a preset menu, pre-delay and modulation controls, EQ curves and mix levels dotted around its edges but at the centre is a tri-colour blending pad for the three reverb engines that drive the plug-in. This single-control blend method makes setting up fast and simple. But knowing what you’re dragging the blend node around for is the first step into the world of Neoverb. 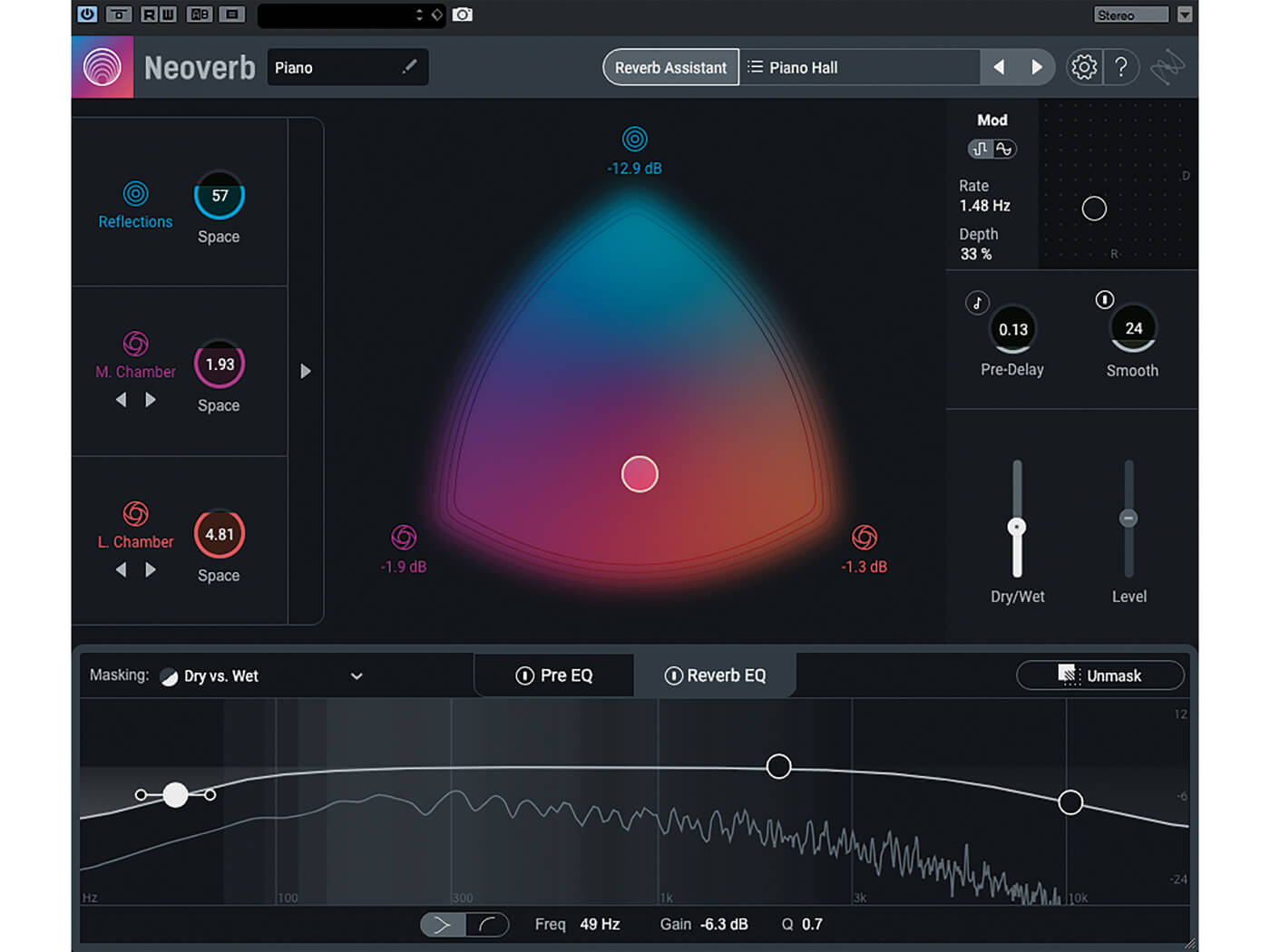 Atop the rounded triangle blending area is the Reflections engine, named Blue. From here, you can control the early reflections. The 250ms of available decay can be edited to the left of the blend area using the reflections space control. This left-hand area stacks the three engines and features basic on/off and space (time/size) controls. Below Reflections are the two reverb-tail-generating engines, named Violet and Orange. Both are capable of decays of up to 24 seconds and proffer identical controls, differing only in their minimum decay times (1.4 seconds and 4.17 seconds, respectively) and reflection types: Violet provides room, medium chamber and plate reverbs, while Orange offers hall and large chamber.

The advanced parameters – which are just a show/hide bar click away – are as extensive as anyone would require. That is, except for the absence of stereo width and panning controls. The Blue engine has five parameters: time, space, diffusion, angle and low-pass filter frequency. The low-pass filter’s effect is only slight, as its maximum of 250ms is almost too short for a noticeable roll-off. The other four controls in combination open up the world of early reflections, from realistic to AMS non-linear reverb-style artifice. Used with the tempo-sync (global) pre-delay, this is a creative area for percussive sources, be they drums, arpeggiated bass or spitting vocals.

The Blue engine is impressive on its own but rolling in the Violet and Orange tail-maker engines is where the fun really begins. Their control panels offer almost identical temporal parameters as Blue but with expanded tone sections. A tilt EQ with adjustable crossover (20Hz to 4kHz) accompanies the low-pass damping with controls for frequency and roll-off rate. The longer the tail, the more these parameters become vital tonal shapers. The angle control in Blue is swapped for attack in the medium and long reverb tail engines on Violet and Orange, respectively. This determines how quickly the reverb tail builds – the higher the value (0 to 100), the longer it takes for the reverberations to reach their maximum level and the density after which they decay. This greatly benefits percussive and transient-rich sources, as you can put distance between the peaks and their resulting reverb splash so that the latter doesn’t swamp or blur the former. This differs from the global pre-delay control, which defines the period before the signal enters the three reflection engines. 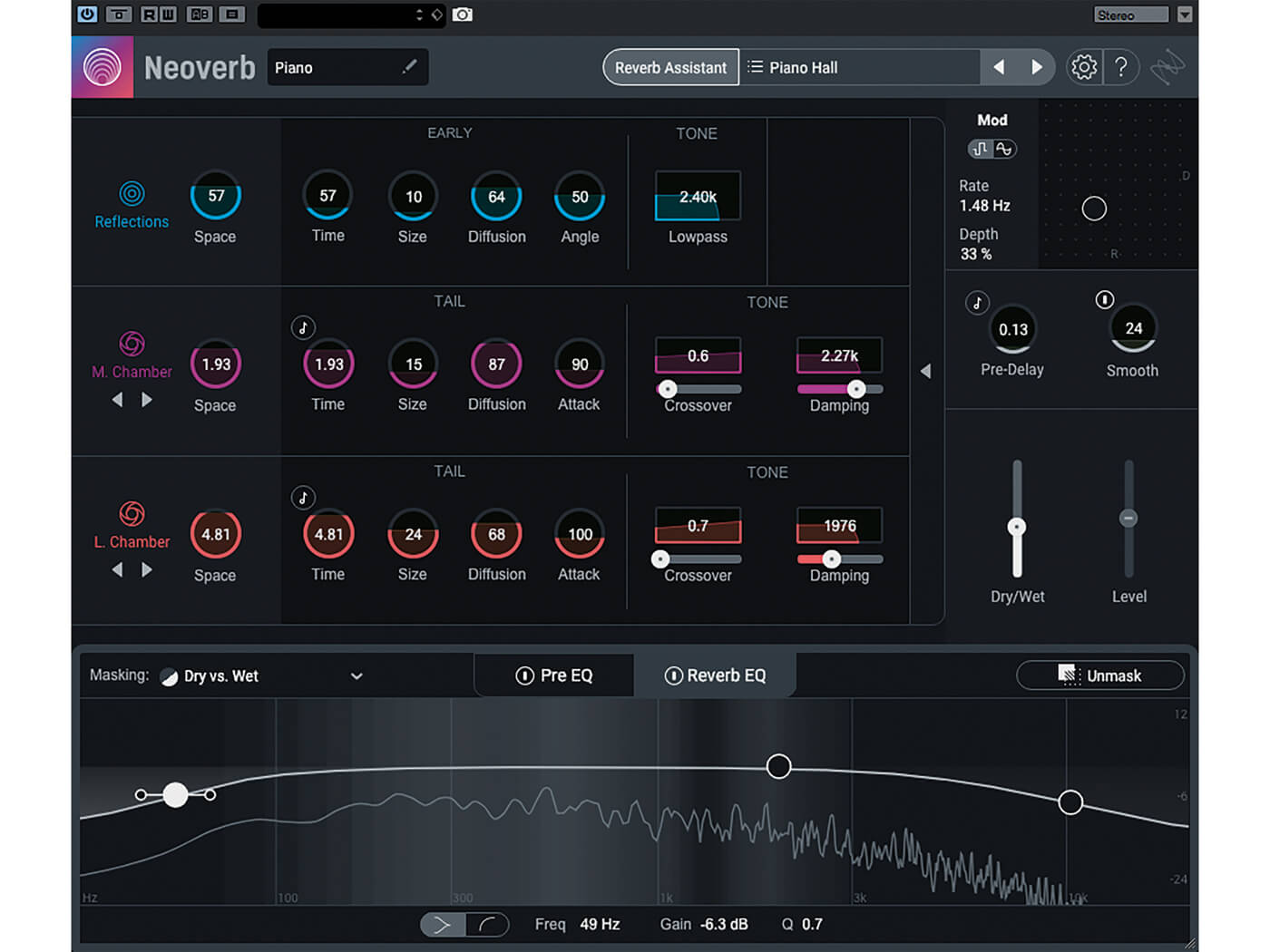 The five reverb types provided by Violet and Orange are distinct and behave as expected: the plate rings overtly compared to the far smoother medium chamber, which in turn is less reactive in the mids than the room algorithm. Getting stuck into the fine adjustments of Violet and Orange can produce excellent results, from realistically complex acoustic spaces to hyped-up shimmers and beyond. Balancing the time and size parameters is key to the behaviour of the space, and to this end the space control, which remains when the advanced control panel is hidden, moves these two in lockstep to hold this balance. The interface quality is typical of iZotope and makes reverb tailoring as easy or in-depth as required, never getting in the way of the creative process.

The algorithms themselves are top-notch and the sounds that can be coaxed from Neoverb are excellent across a broad range of audio needs, from sound design and post-production to acoustic and electronic production. Everywhere we apply Neoverb, it produces state-of-the-art reverb results. In many cases, we prefer its sound over long-time favourites.

For those not willing to get elbow deep in the guts of three reverb engines, there’s a healthy library of presets that will get you 95 per cent of the way there. The beauty of the main (non-advanced) interface is that presets can be quickly dialled into place with few moves. Balancing the early reflections and the two sets of tails might quickly become your new normal. We find a nice sweet spot by regularly treating the Orange (long) reverb as a slight extension and depth intensifier to the Violet (medium) engine once a balance has been struck between that and the Blue early reflections.

At the bottom of the GUI, you’ll find the three-band post EQ and reverb EQ, which overlay a real-time spectrum analyser. The EQs deliver the essentials: parametric low- and high- shelving and pass filters, and mid peak. Pre EQ features an auto-cut option, which scans the input and adjusts the response curve to counter resonances and overly dense frequency ranges. You can reduce or accentuate this response using a 0-200 per cent slider too. The response can be deleted with a quick click but, in most instances, it produces an improvement, however subtle.

Similarly, the reverb EQ has an unmask function that can compare sources (instances of other iZotope plug-ins or the dry input signal) to the reverb output to identify masking issues, such as excessive frequency overlap. Masking areas appear on the spectrum analyser as white highlights, helping users hone in with the EQ or use the unmask button to adjust the response curve automatically. As with the pre-EQ auto-cut, this adjustment can be scaled or deleted and, in most cases, benefits the source, reverb and mix.

For the fastest set up, Neoverb suggests its Reverb Assistant. When engaged, users need to run audio while dragging a slider between ‘realistic’ and ‘dramatic’, then select their preferred size (S, M, L, XL), wet/dry level and one of four characteristics: clean, dark, bright, airy. Once happy with the initial selection, the auto-cut and unmask processes kick in for about 10 seconds et voilà. Such a function may put off start-from-scratch enthusiasts but, in this instance, we prefer it to trialling presets and even, lord have mercy, setting up ourselves. Obviously, it’s meant to be a starting point. But it gets you remarkably far along the finished product.

Neoverb has everything going for it. It’s quick to set up and easy to edit. It sounds great across a wide range of applications, and there’s plenty of controls for hands-on users. Instead of emulating a classic outboard reverb with all its character and limitations (which wouldn’t be a bad thing), Neoverb places the onus on the user to define what’s needed while providing tools to aid that process. It does so at a healthy price too, which, for regular audio-makers of all stripes, will seem increasingly reasonable as they spend more time with this capable and innovative tool. 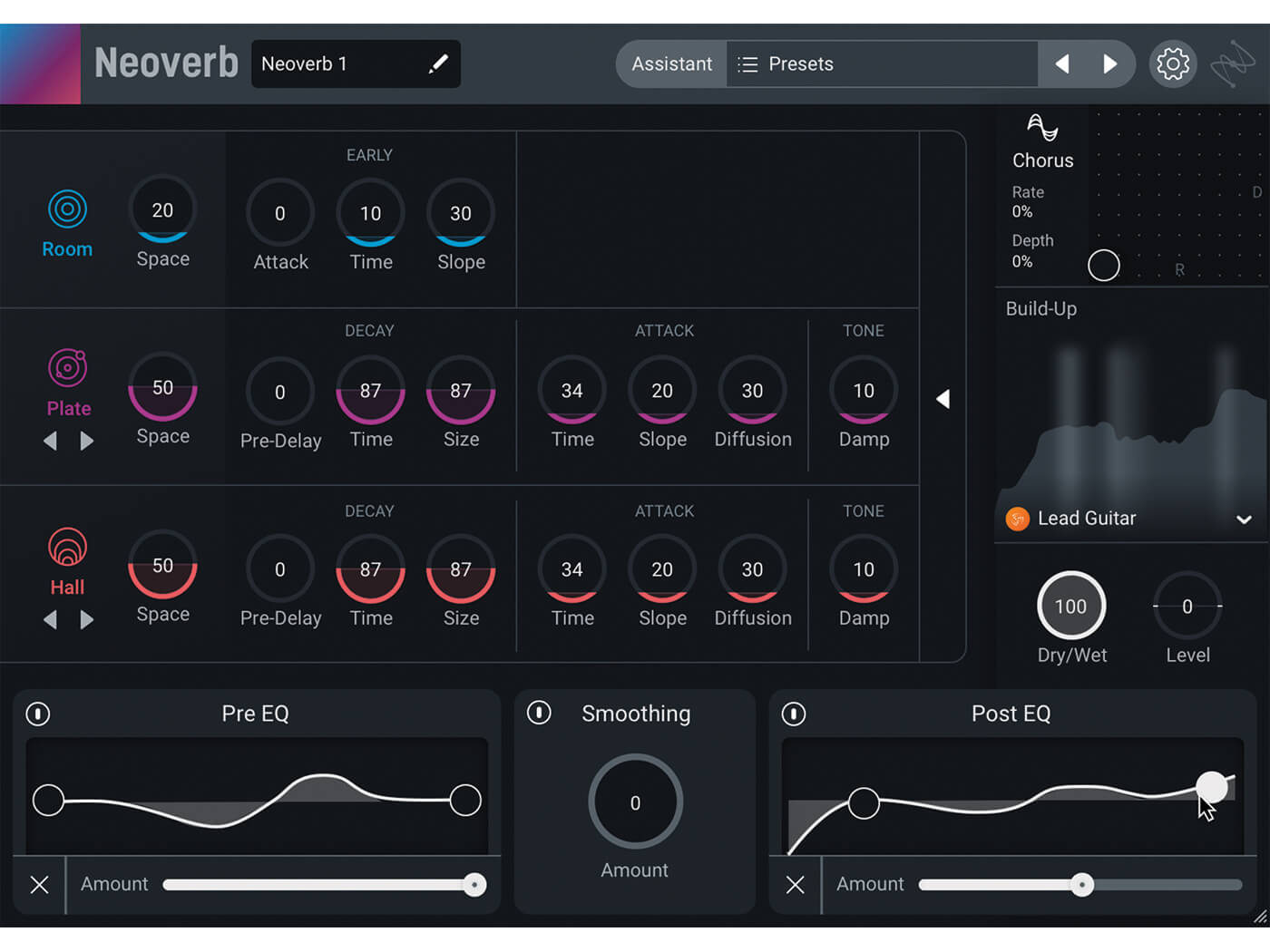 How many reverb plug-ins do you have? Unless you’re only using the DAW native set, the honest answer will probably be “too many”. A lot of fantastic reverbs are idiosyncratic and suit specific sources, such as go-to vocal plates that never sit right on anything else but have a few sweet spots that meant you’ll reach for them every now and then. Neoverb doesn’t do that. It doesn’t sound like an EMT140 or a Lexicon 480L. But it does sound superb – and across a broad range of uses, from vocals, synths and drums to sound design and effects. The ability to focus on the early and later reflections separately is key to making this a malleable, creative spatial tool. It’s so easy to set up and achieve brilliant results with this plug-in.

A comprehensive reverb that effortlessly covers the essentials and provides a platform for truly creative effects. It’s sensational for sound design, as well as music.

This is close to owning a Bricasti M7 as you’ll get without doing so. The Pro version hosts an exhaustive IR-based set of algorithms, from the M7 to a wealth of fine-tuning controls. The cheaper version offers less range and control but excellent VFM.