Truly original creative tools are not common in the music-making sphere but these quirky plug-ins from Faded Instruments seems to tick all our boxes. 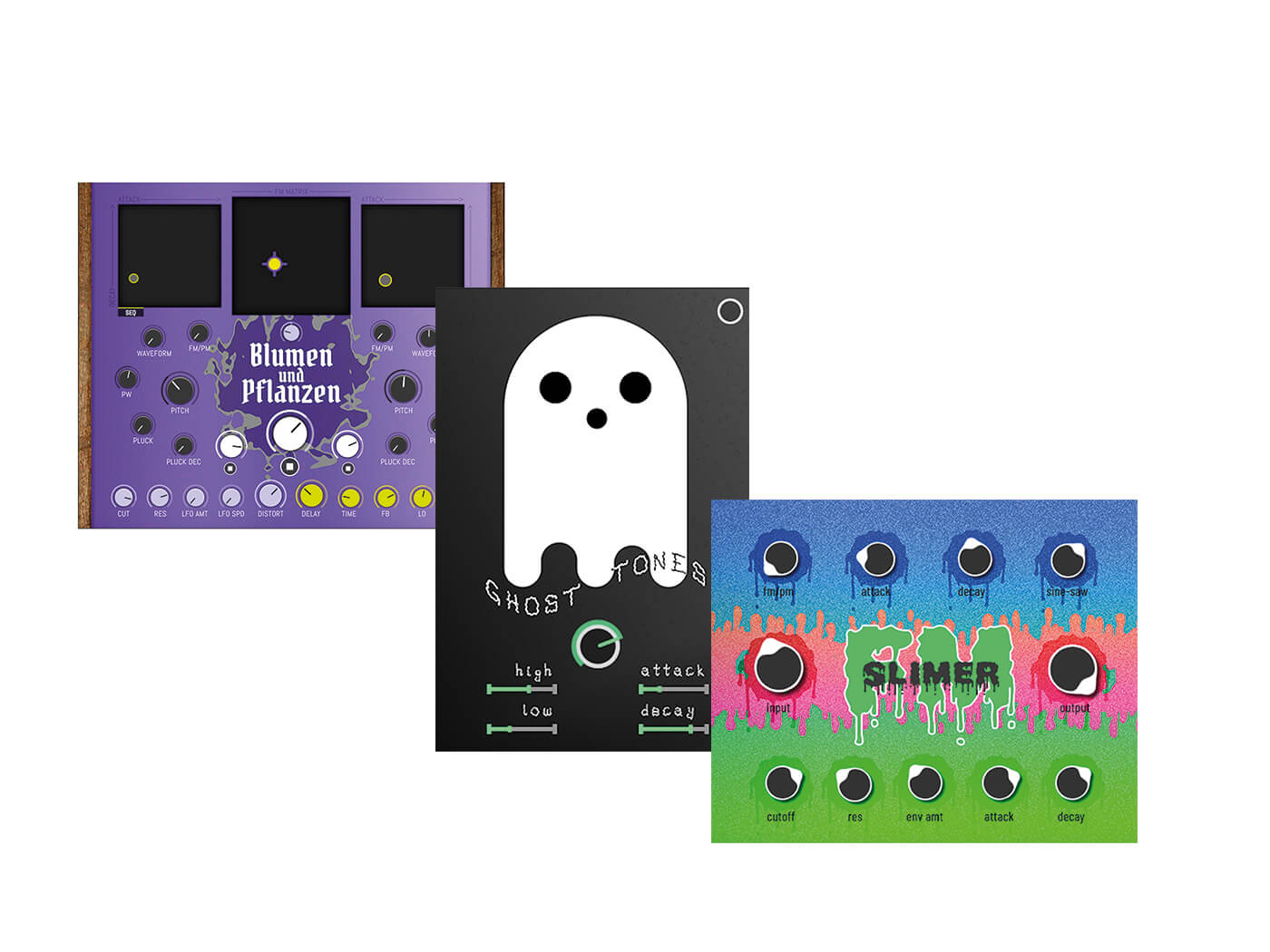 Native Instruments’ Reaktor is a capable though complex audio workstation. Its toolbox of prebuilt components coupled with its ability to run custom processing code and algorithms makes it a seriously powerful piece of kit and, by allowing anybody to try their hand at creating processors and instruments, Reaktor has given rise to an active community of sound designers who, unrestrained by commercial necessity, are creating some of the most fascinating and unusual processors around.

However, for one member of this community, artist and educator Doron Sadja – who splits his time between Berlin and LA – only being able to share creations with other Reaktor users became frustrating. So, rather than restrict his creations to Reaktor users, he created his own plug-in firm, Faded Instruments. Its mission is “not to make perfect instruments” but to make instruments that “offer new ways of thinking about sound” and, across the company’s initial trio of releases, Blumen und Pflanzen, Ghost Tones, and
Slimer FM, this ethos is on full display. 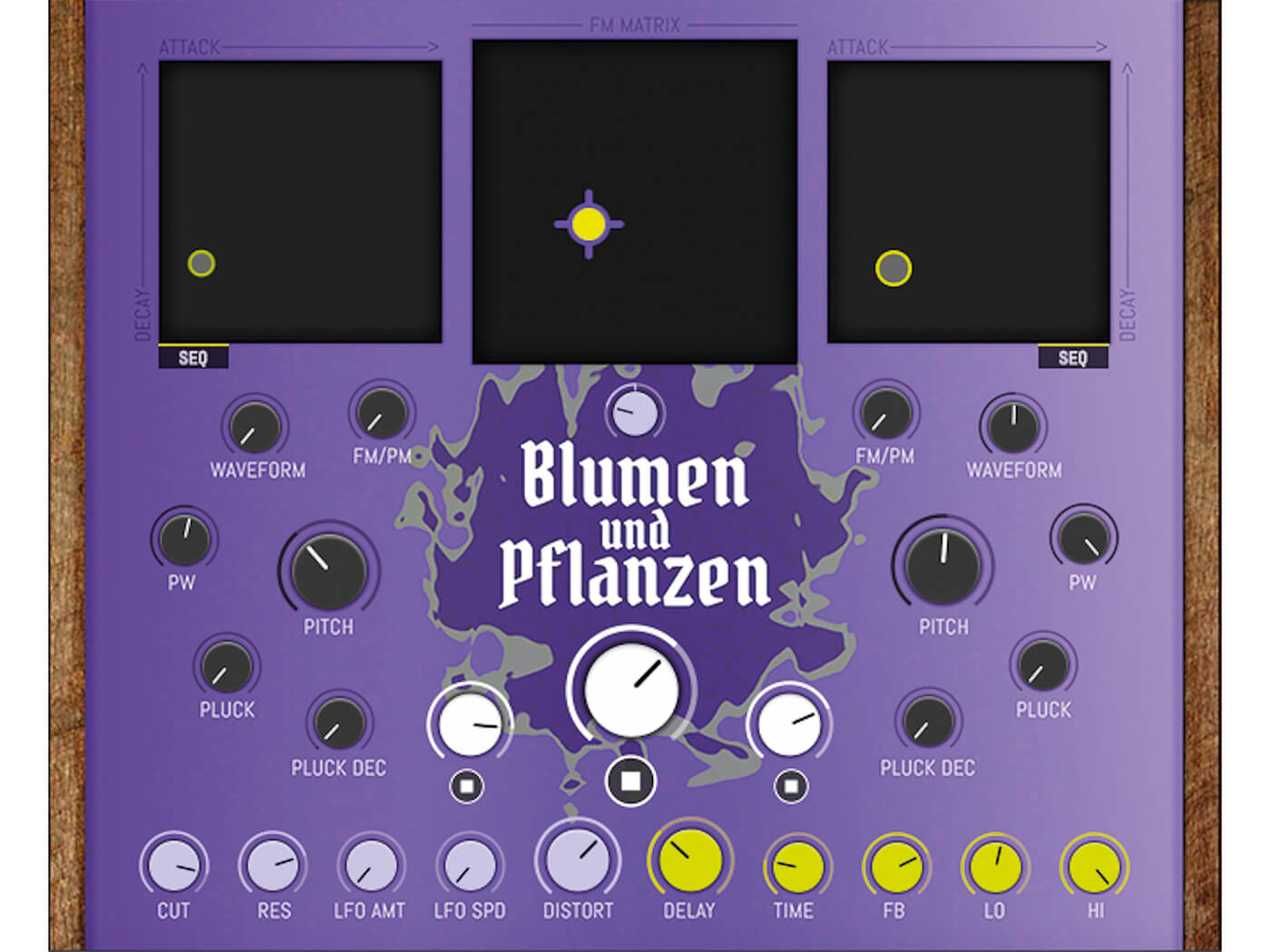 Look at the flowers

These Faded Instrument plug-ins don’t lend themselves to easy description. That’s especially the case with Blumen und Pflanzen, which means Flowers and Plants in English. This soft-synth has two oscillators, each of which can morph from a sine wave to a square wave with an adjustable pulse width. There are also a couple of controls that introduce a filter zap to the attack portion of an oscillator’s sound, with the intensity and duration of the zap set via a couple of dials on the oscillator’s panel.

The outputs of the two oscillators are combined using a blend of frequency and phase modulation, and the amount that each oscillator contributes to each modulator is controllable. The central X/Y pad provides further interactive control over how the oscillators modulate one another. The signal chain is rounded off with a resonant filter, with built-in LFO and distortion, and a delay.

The upshot of all of this is an instrument that pumps out rhythmic and counter-rhythmic pulses and throbs, all with the added digital mashing of an over-excited FM/PM modulator. There is no means of syncing the rate of the pulses, LFO or delay with your DAW, which feels limiting but is in keeping with the hands-on and organic nature of the instrument. 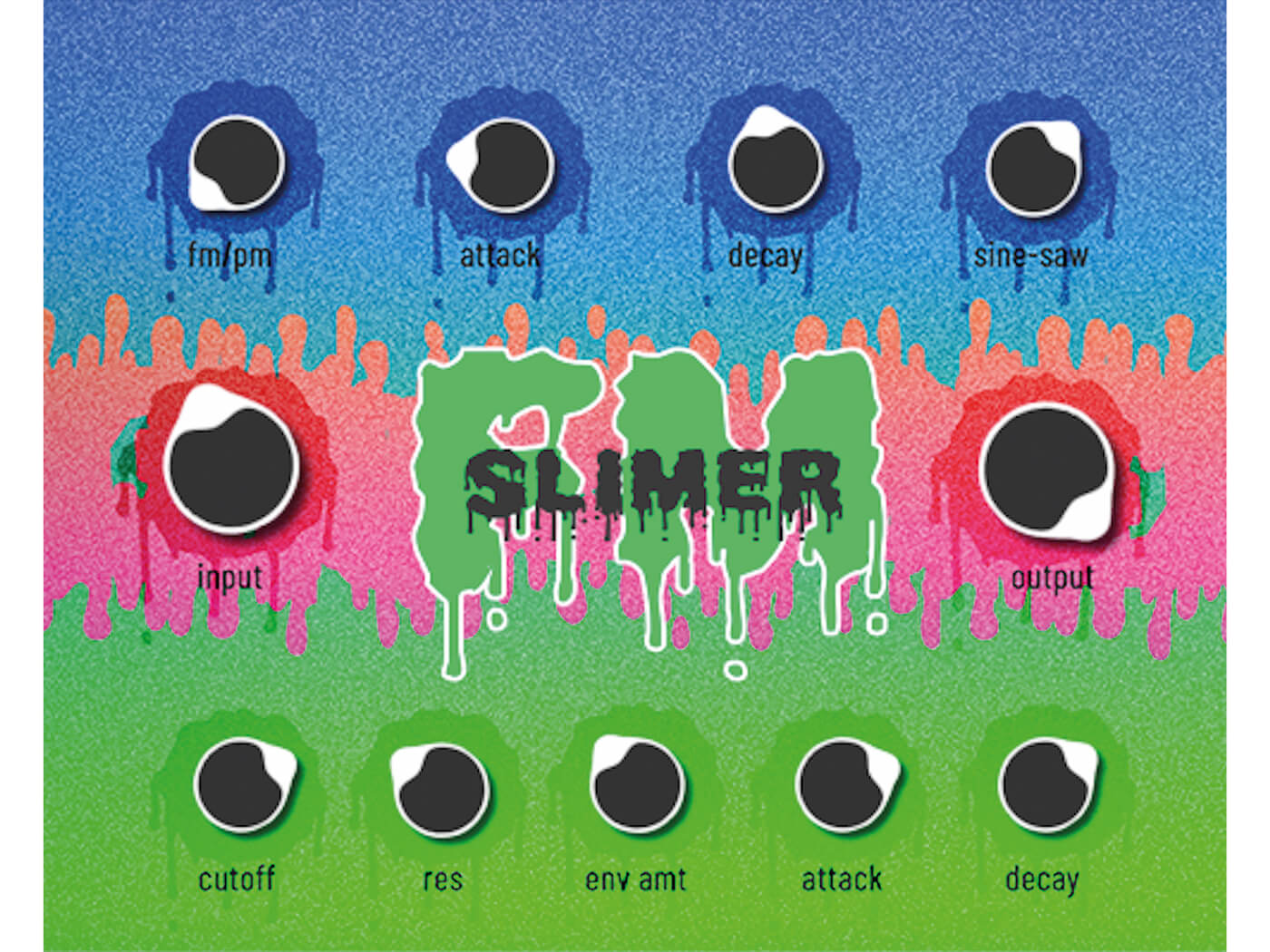 You were never really here

Have you ever been near a screeching fire alarm? If so, when the siren was at the threshold of hurting your ears, did you notice a slightly distorted sound between the loud twin tones of the alarm? If you happened to have a microphone and an oscilloscope with you, you’d see that this strange sound doesn’t actually exist. What you’re actually experiencing here is evoked otoacoustic emission, a phenomena created within the inner ear – and the very principle that the Ghost Tones plug-in looks to harness.

When you trigger a note in Ghost Tones by playing a key on your keyboard, the instrument creates a randomly pitched sine wave, along with a second sine wave calculated to create an otoacoustic-emission response through which you will hear the note you played, even though it isn’t actually there. The plug-in has a simple interface that allows you to set the frequency range of the random note, as well the attack and decay time of the resulting sound itself.

It sounds astonishing but, unfortunately, we find that it doesn’t really work. At least, not at volume levels that don’t contravene strategic arms-limitation treaties anyway. At any volume that can’t shatter glass, all you hear is a random pair of sine waves, one low in pitch, the other high. Even with the volume cranked to ear-splitting levels,
you can only just hear the effect.

Approached as an example of science in action, Ghost Tones is undoubtedly very fascinating. But we fear it has little scope to be used as a musical instrument because it’s so heavily reliant on specific – not to mention unpleasant and damaging – listening conditions. On the plus side, though, the plug-in is free and certainly worth 10 minutes of your time, if only to learn more about and experience the otoacoustic emissions – if your monitoring is loud enough, that is.

Following the craziness of the other two Faded Instruments plug-ins, Slimer FM seems positively tame. This is essentially a simple two-operator FM/PM synthesiser. What makes it different, however, is that one of those operators is an audio input. Slimer FM’s other operator is a simple oscillator that can go from producing a sine wave
to a saw wave. This operator is modulated by the input signal in the frequency and/or phase domains, and you can blend the amount of each using the FM/PM control. The results are passed through a resonant filter with a dedicated attack/decay envelope generator.

Slimer FM is remarkably easy to use for an FM synthesiser but the sounds it produces rely entirely upon what you feed into the audio input. Interesting effects can be created using drum loops and vocals but sources with lots of tonal complexity result in sounds that are so tonally busy that they approach noise. Still, with some experimentation and fiddling with the set of controls, you can coax fascinating sounds from Slimer FM, albeit sounds that are challenging to make use of.

Taken together, this first batch of Faded Instrument plug-ins fall squarely into the quirky and experimental brackets. Ghost Tones isn’t going to be much use for making music but Blumen und Pflanzen and Slimer FM are capable of interesting and complex sounds that could lead you in interesting directions. 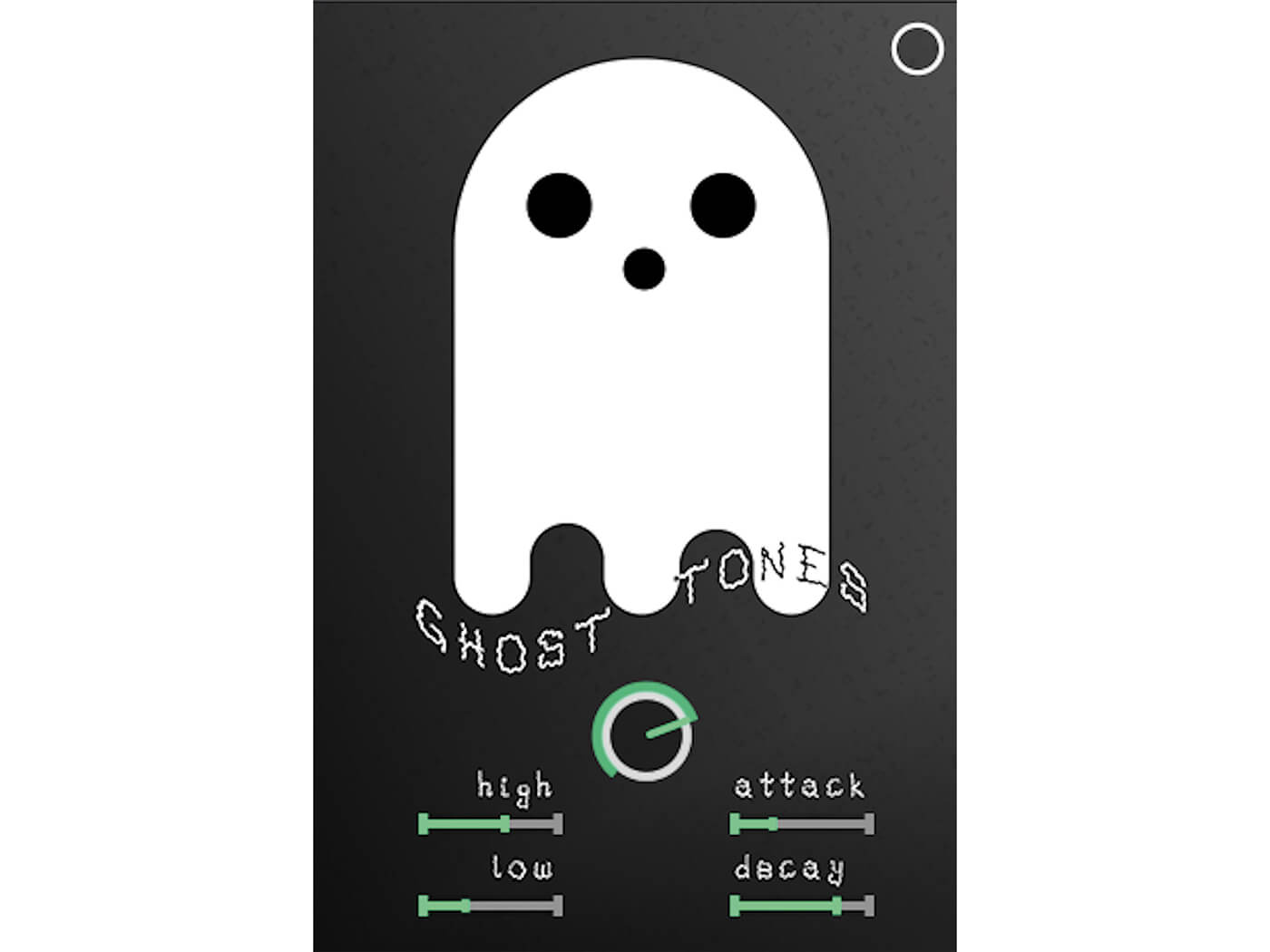 It can be difficult to judge the usefulness of off-the-wall plug-ins such as these. For all the sonic interest in the sounds they produce, it can take a certain type of mindset to envisage ways of incorporating such strangeness into a complete piece of music. That said, those who have the necessary thought processes will find tools such as Blumen und Pflanzen, Ghost Tones and Slimer FM as indispensable as the are fascinating.

The developer of these instruments is as much an artist and educator as he is a coder, and this is reflected both in the way the plug-ins encourage user experimentation and in the more than reasonable pricing. Faded Instruments will even provide the plug-ins for free to those who can’t afford them but who can make a case for needing them.

This instrument runs in NI’s Reaktor engine but there’s a free player version of Reaktor that can load instruments like this too. Rounds blends analogue and digital sounds with advanced sequencing capabilities.

The notion of an organic synthesiser is taken to its ultimate conclusion in Synplant, a synthesiser that grows its sounds from seeds. The synth is edited by choosing a source seed, followed by which roots to grow.