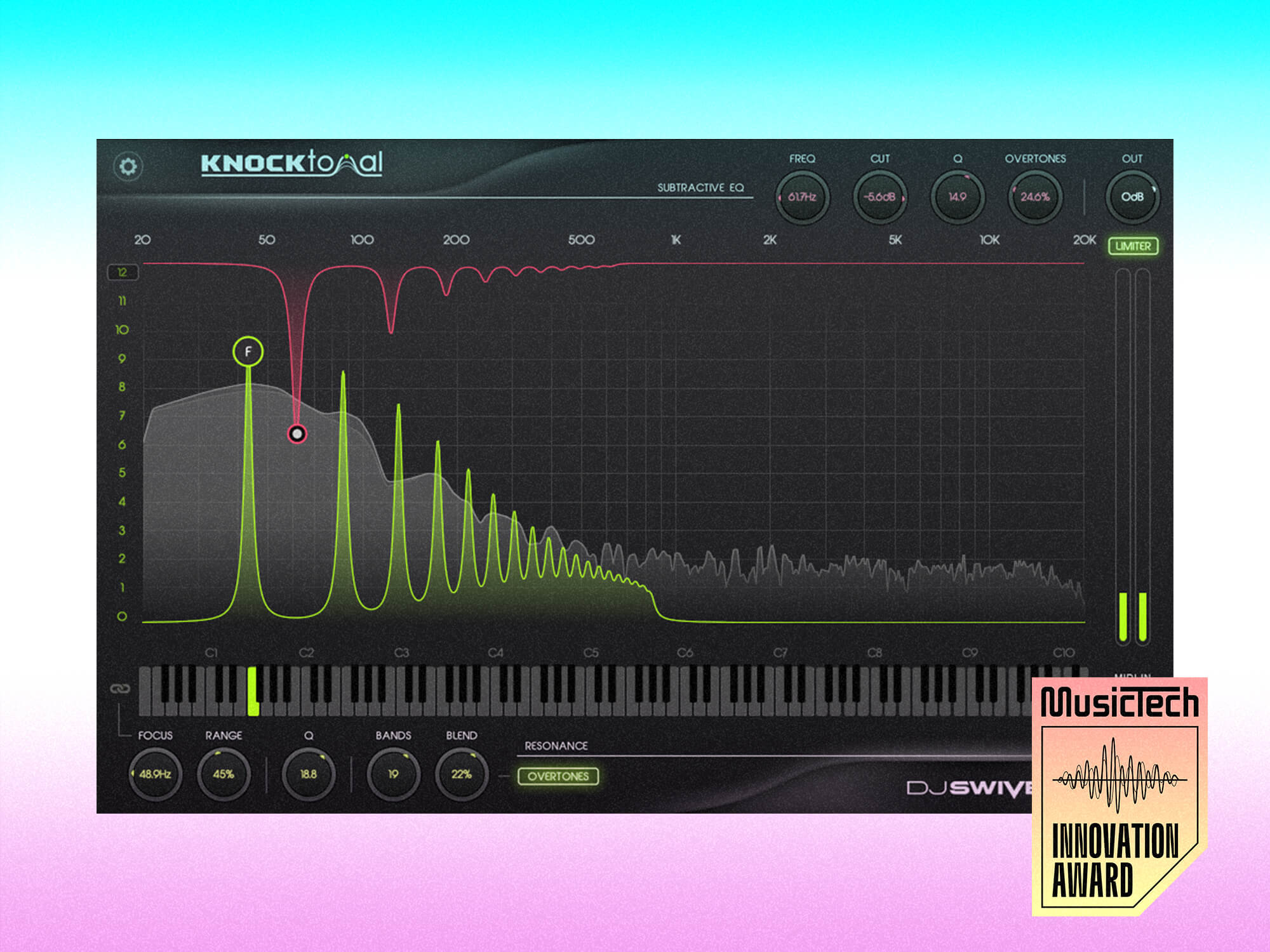 In the right circumstances, the Knocktonal is an excellent plug-in for working with resonance in drums and other material, and an innovative new tool to add to the box.


Although tuning drums to fit the key of a track is a well-known trick, it can sometimes lead to less than stellar results – especially when working with electronic genres where powerful transients are an essential element to a hard-hitting club mix. For instance, you could have a great-sounding hit that’s out of key; however, when you tune it, you find the attack portion loses its punch or its tail changes length.

This is where DJ Swivel steps in with his innovative new plug-in, Knocktonal, which is designed to address the issue by manipulating track resonance. It’s a note-based resonance enhancer with the ability to boost or cut resonances along with their corresponding harmonic overtones. This is clearly presented on the crisp GUI, which displays boosted green resonance coming up from the bottom and cut red resonance pulled down from the top, along with a useful spectrum display in the background.

The first thing you might want to do is to remove the original resonant note from the audio – from a kick drum, for example. You can use the Subtractive EQ with controls for Frequency, Cut amount, Q, and Overtones, which adds additional related harmonics.

This gives you a clean slate on which to add some new pitched notches. For this you turn to the Resonance EQ, which snaps to notes along a keyboard display on the bottom of the screen. After selecting your notes, you will be presented with various controls that allow you to shift the emphasis around. Choose a high Q value, for instance, and you can make the kick sound more like a ringing, pitched 808.

The Range dial selects how much volume is added to the other harmonics around the root. The Overtones button adds additional upwards harmonics, and switches to Octave mode when switched off. With Overtones engaged, you can blend between odd and even, and select how many bands to adjust. There is also a Focus dial which allows you to move focus to the other bands. 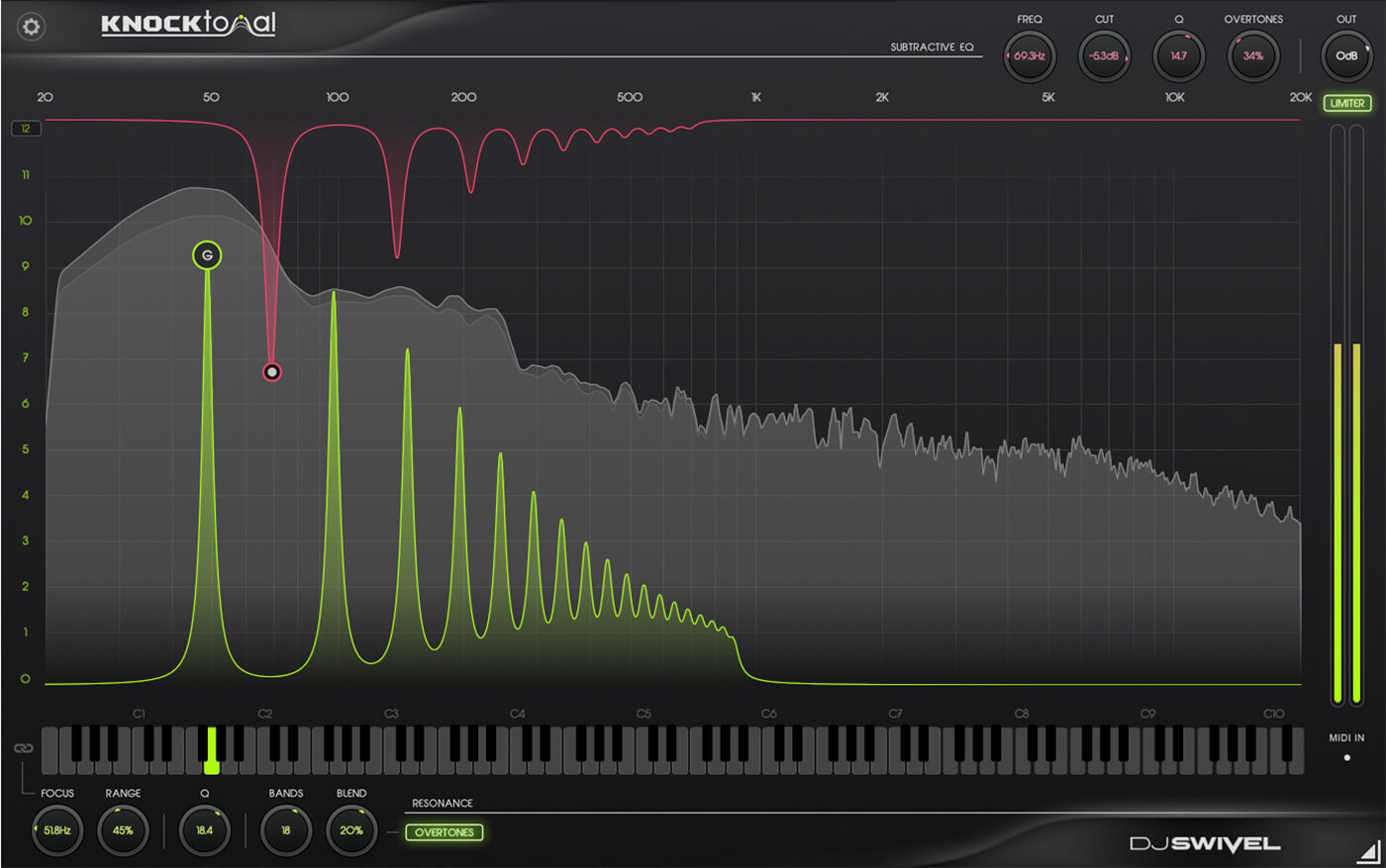 It might sound a little confusing at first, but the visual display makes it all very intuitive, and you can quickly try out different amounts of harmonic rebalancing. There’s also a master Output volume, and a safety Limiter, but no presets. The lack of presets makes sense given the nature of the plug-in, as it has to be set on a case by case basis.

Knocktonal is designed for with percussive audio, and for that it works well. It offers a great alternative to pitching samples for re-tuning kick drums in particular, and allows you to retain the all-important transients and knock sound. It’s also great for toms and snares, although we found the Subtractive EQ a little limiting when working with hats that had multiple resonances we wanted to remove.

Things get a little more interesting when you start automating the pitch of the boost. You can draw in automation changes or send MIDI to the plug-in, as it also works as a MIDI-controlled effect. Truth be told, the most fun we had with Knocktonal was adding resonant harmonics to a synth bass pattern. By having the automation follow the notes, we were able to add targeted character to alter the sound.

With the Overtones switched off so it was just adding some subtle octaves, it gave the soft synth a satisfying, analogue sounding bite. You have to play around with the automation timing a little as the nature of the moving resonance will create a subtle pitch slide, but you can always bounce and chop the audio, or use it as an interesting effect.

There are a few little things that we would like to see to improve workflow. Having the frequency displayed would be useful when moving the Boost note around and having Bypass buttons for the two EQs would make A/B-ing much smoother. It would also be nice to have a built-in tuner to help identify the pitch of your audio without having to load another plug-in.

Overall, Knocktonal is easy to use though, and it offers an alternative tool for certain mixing tasks. It might not be your go-to for every situation, but it’s an innovative solution and is excellent at what it does.