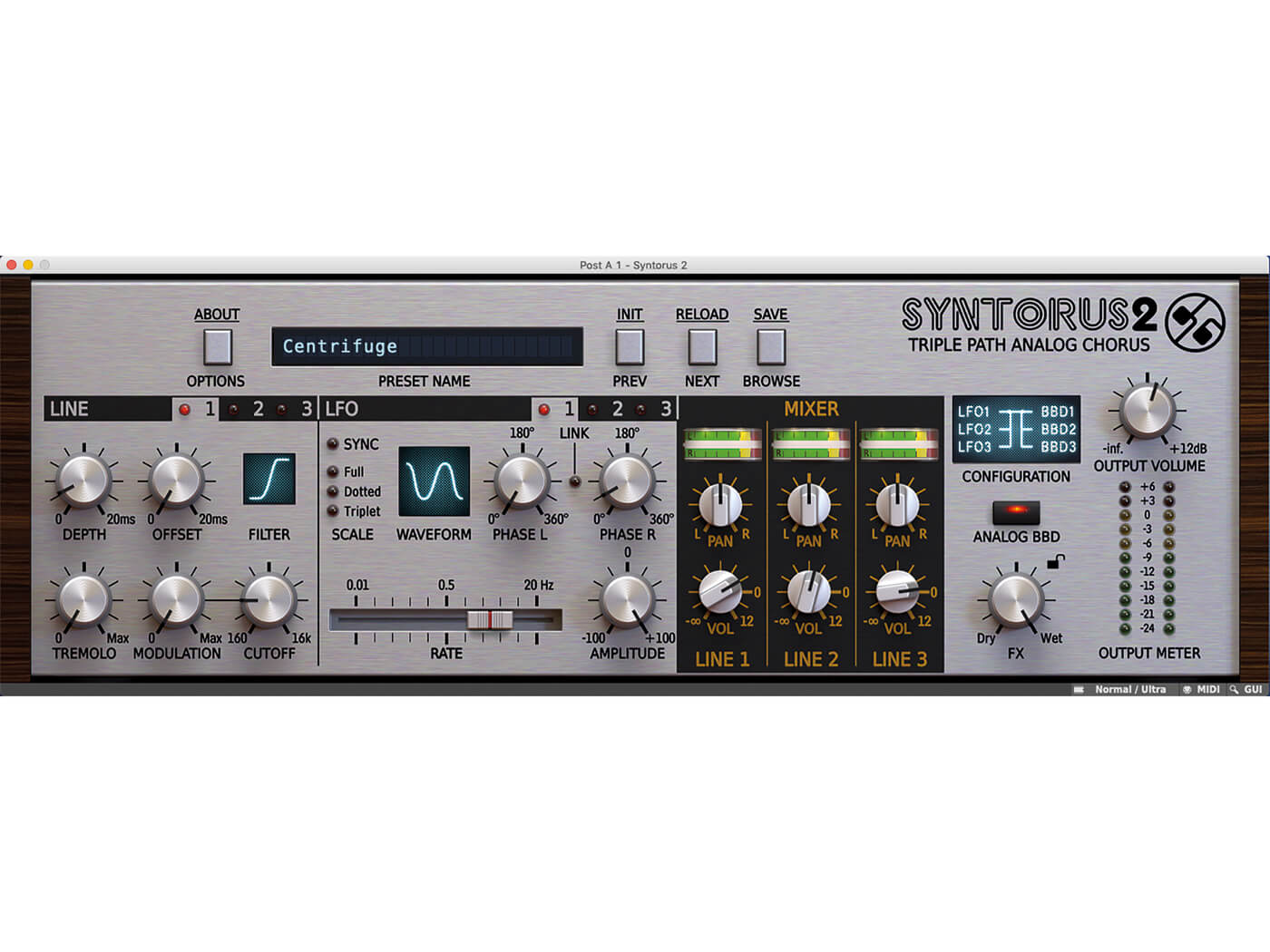 Chorus effects have been around since the earliest days of audio recording and they remain an important tool. The effect is relatively simple to create. It consists of a delayed signal being modulated and mixed with the original source signal, which is why the delay aspect of a chorus processor is fundamental to how that processor sounds.

Originally, chorus was created using tape technology, and there are many modern plug-ins that model this approach. But the other key analogue method, which came later, relied on banks of capacitors to create a delay line, and LFOs to create the necessary modulation. In this sort of circuit, the delay is created by passing signals from one bank of capacitors to another in response to a clock signal, thereby delaying the signal by a quantifiable amount. This is a bit like a line of people passing along buckets of water from one to the next, which is why this sort of delay circuit is often called a bucket-brigade device, or BBD.

The particular tonal qualities of BBD delays differ markedly from those of tape delays but are no less pleasing in their musical analogue sound. It’s precisely this form of delay that lies at the heart of D16 Group’s Syntorus 2 Triple Path Analog Chorus plug-in. 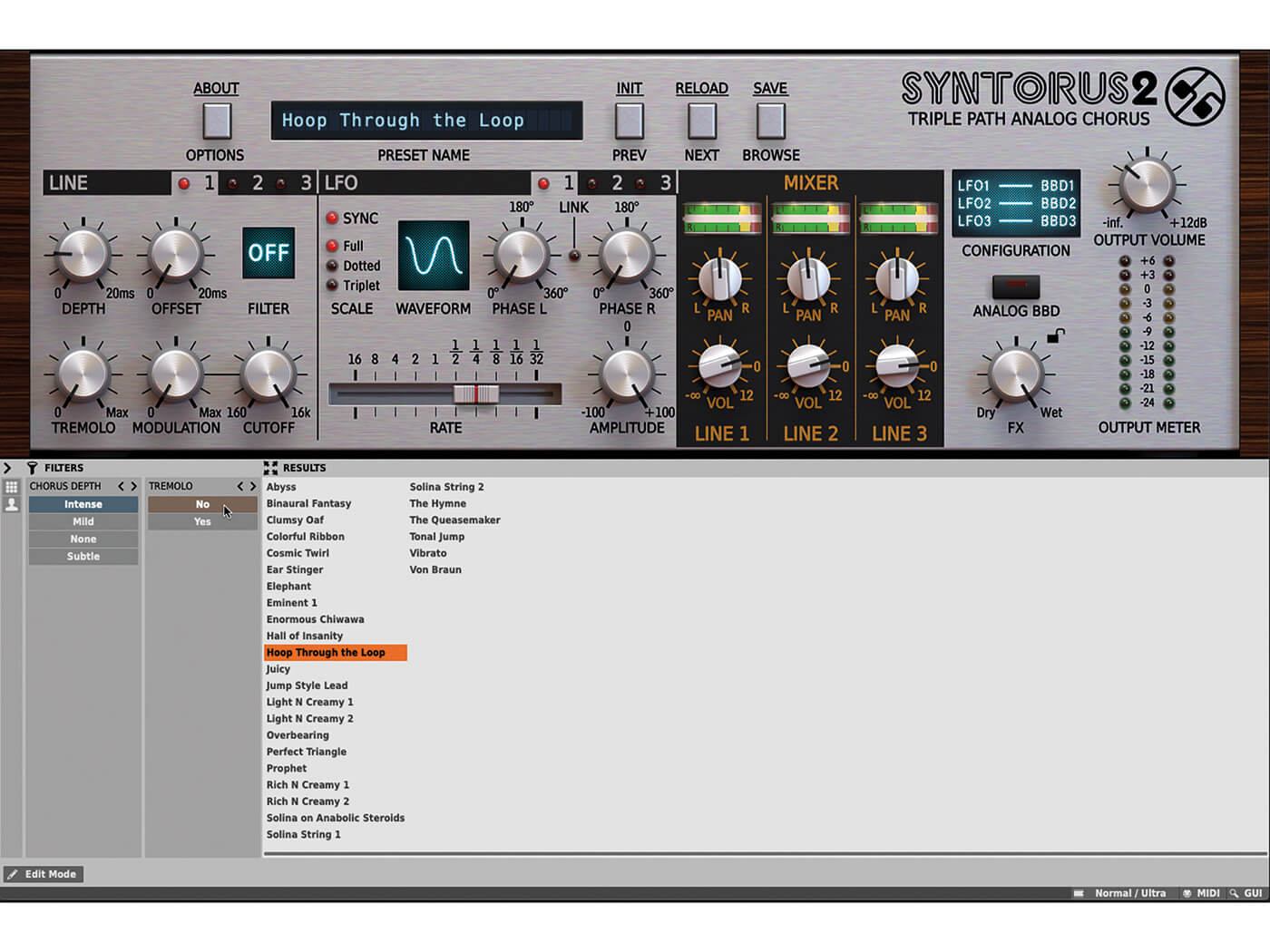 The Syntorus 2 plug-in looks very much like a device from the 1980s solid-state  heyday, with a brushed aluminium fascia and controls, wooden end-pieces and backlit LED-style readouts. It’s a good look – retro but without all the dusty valves and bakelite.

The ‘Triple Path’ part of the plug-in’s name refers to the three simultaneous choruses that it can generate and mix together. These begin as three independent delay lines, each with a built-in filter (switchable between high-pass, low-pass and band-pass modes). Each delay line can have its delay time, amplitude and filter cutoff modulated by the plug-in’s LFO generator, which also features three channels. In the most basic configuration, each delay line is modulated by the corresponding LFO channel. But two other configurations are allowed: the first sums the outputs of all three LFOs and routes this to all three delay lines; the other sums LFO1 and LFO2 and routes the result to delay lines 1 and 2, while delay line 3 remains under the sole control of LFO3.

Each LFO can use one of six waveforms: sine, triangle, hyper-triangle (essentially a triangle with ramped sides), sawtooth, square, and sample-and-hold. The LFO frequency can be synced to the host DAW’s tempo or can freewheel from between 0.01Hz and 20Hz. Most intriguingly, you can set a different phase for the left and right channel of an LFO, which gives you a lot of control over how narrow or spacious your resulting chorus effect will be.

The LFO section is followed by a mixer, where the volume and pan position of each delay line can be set. This mix is independent of the overall wet/dry mix, which is set in the plug-in’s master section, and can be locked so that it doesn’t change when loading different presets. The master section also houses a button that enables Syntorus 2’s Analog BBD mode. When disabled, each delay line delivers a clean but not clinical analogue-like tone. But when active, the plug-in uses a BBD emulation to create the delay lines, resulting in a warmer and more coloured sound redolent of the sort of 1980s hardware it takes inspiration from. 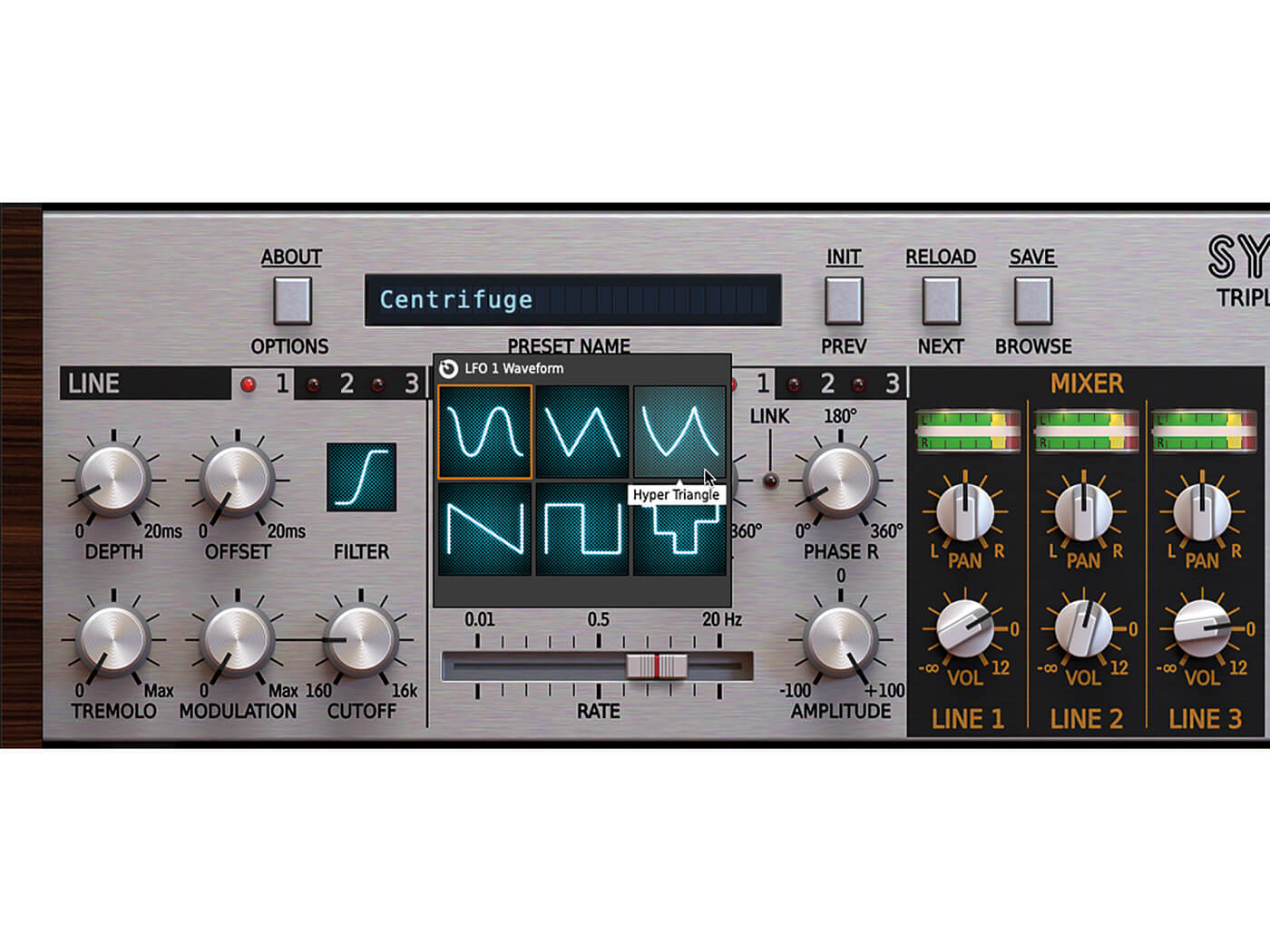 Although labelled as a chorus processor, there’s a lot more to Syntorus 2 than chorus effects, as a quick flick through the 150 or so presets reveals. There are some fantastically rich and complex choruses, of course, but Syntorus 2 is also adept at creating rotating-speaker effects, rhythmic chopping and stuttering effects, and off-the-wall modulation effects. A lot of this versatility is thanks to its ability to modulate a delay line’s amplitude and filter cutoff alongside its delay time, and to control how intensely each of these parameters is affected by the LFO modulating that delay line. The three-channel LFO module, with its left/right phase adjustment and three different mapping configurations, only adds to this versatility.

Surprisingly, one type of effect that Syntorus 2 is less good at is flanger, which is closely related to chorus. The plug-in can do subtle versions of the effect but the delay lines lack the feedback stage that you’d use to accentuate a flanger effect when you wish it to be more prominent.

On the flip side, a nice touch is that you can scale the amount of system resources that Syntorus 2 uses, with separate quality settings for real-time and offline processing. This means you can keep the system usage low when tracking and mixing, and retain maximum quality and fidelity when offline-exporting your finished mix.

Working with Syntorus 2 is a pleasure thanks to its smart design and well-laid-out control panel, which can be resized to suit different screen sizes and preferences. The presets provide a range of choice and hunting out presets for any given situation is simple thanks to the plug-in’s categorised preset browser. One thing that might rankle, though, is that the four buttons used for global tasks such as storing presets and initialising settings have two functions associated to each. The main function, labelled beneath the button, is accessed via a left click but to access the alternate functions, labelled above the button and underlined, you have to hold down a keyboard modifier. This isn’t obvious, and it might have been more intuitive if the alternate function were accessed via a right click (or, indeed, if each function had a button to itself).

Chorus may not be the most exciting effect and, in many instances, the basic tools built into your DAW will suffice anyway. But Syntorus 2 stands as a reminder that dedicated chorus processors, if well designed and well executed, are more useful and versatile creative tools than such basic examples. Using these, chorus can be an integral part of a sound, rather than simply a sheen on top of it. 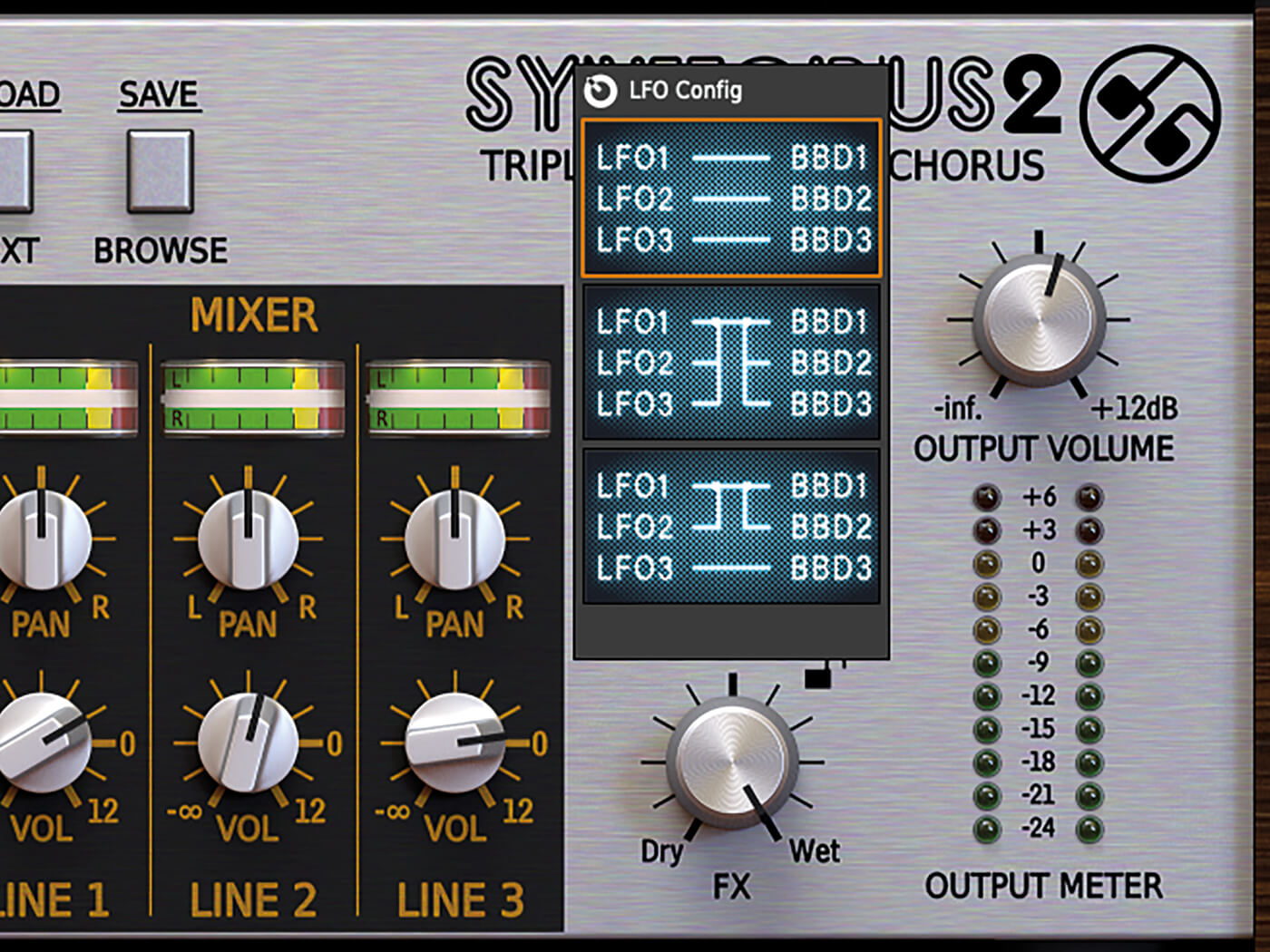 Chorus processors that emulate analogue hardware tend to base their modelling on tape-based delay units, so Syntorus 2’s modelling of a bucket-brigade circuit sets it apart from much of its competition. The sound differs from tape, while also being more pleasing than the clinical sound of purely digital choruses. Of course, chorus and its related effects can be useful when used with many sounds, in particular synths, organs and guitars, but if used injudiciously it can also make parts sound artificial and even clichéd. Using a basic chorus processor might seem sufficient but you may be losing out on the extensive creative options offered by more advanced examples such as Syntorus 2.

MChorusMB is an advanced chorus processor ideal for adding space and width to guitar and keyboard parts. The plug-in operates in a multi-band manner, splitting the input signal into up to six frequency bands, each with access to its own set of chorus parameters.

Chor’X emulates four classic bucket-brigade delay circuits to inject warmth, character and authenticity into its sound. The plug-in combines this modelling with a sophisticated stereo spatialiser that allows you to position a sound source within the stereo image and control its apparent width and distance from the listening position.