Movement is Output’s first audio plug-in, but does it match the calibre of its previous sample-based instruments? Mark Cousins finds out… Details Manufacturer Output Price £122 Contact Time+ Space 01837 55200 Web output.com Over the course of its three previous products – REV, SIGNAL and EXHALE – Output has developed a range of Kontakt-based virtual […] 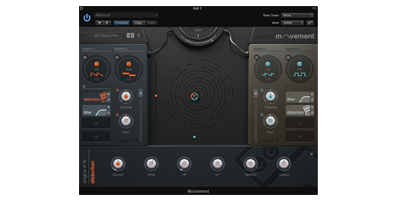 Movement is Output’s first audio plug-in, but does it match the calibre of its previous sample-based instruments? Mark Cousins finds out… 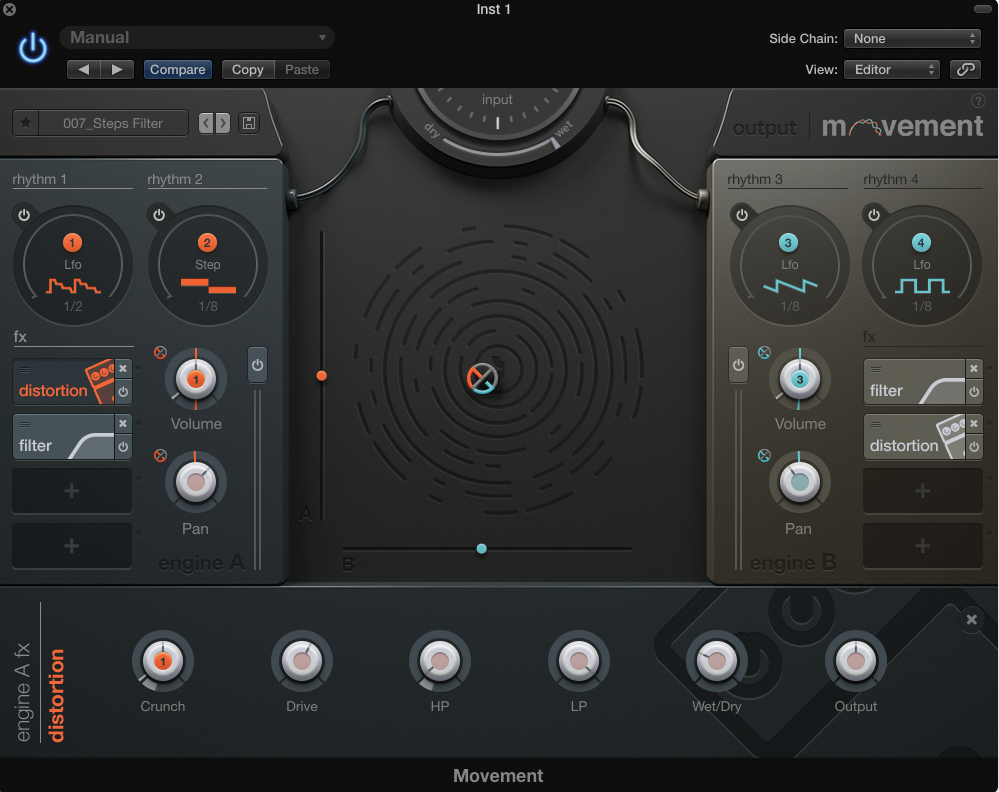 Over the course of its three previous products – REV, SIGNAL and EXHALE – Output has developed a range of Kontakt-based virtual instruments with a consistent level of ingenuity and creative flair. Anticipation for the company’s fourth release was high, then, but few expected that Output would make the bold jump between the world of sample-based instruments and the parallel universe of audio plug-ins.

Movement is Output’s first audio plug-in, and it’s designed to impart a range of rhythmic qualities onto any number of audio sources that you pass through it. However, given the high standards we’ve come to expect from Output instruments, does Movement make the grade as an audio processor?

To fully understand what Movement has to offer, it’s worth taking some time to describe its signal path and the creative possibilities it entails. Movement is powered by two parallel effects engines (A and B), each of which has up to four different effects slots that can be used to instantiate a range of signal-processing options, including filters, delays, reverbs, compression and distortion.

What makes Movement really interesting, though, is the introduction of four rhythm generators, spread across the two FX engines. The rhythm generators are presented as LFOs, step sequencers and a sidechain input, all designed to add movement to the aforementioned, and otherwise static, FX engines.

Sonically speaking, the output of Movement can be characterised as a range of animated FX treatments that vary given the material presented to them. A vanilla-sounding synth pad, for example, suddenly comes to life with pulsating filter treatments; or a simple guitar line suddenly becomes a rhythmic feature with a choppy, staccato-like gate, bathed in echoing delays.

For new users, it’s well worth spending time with Movement’s presets just to see the breadth of what the plug-in can achieve, and thanks to a clear preset-tagging system (using descriptions such as choppy, pulses or sidechain), it’s easy to find the treatment that you’re after.

Part of the appeal of Movement, as with Output’s other products, is the way the interface integrates itself into the process. What could be a complicated plug-in, therefore, remains intuitive throughout the entirety of its use – immediate and accessible for the first-time user, yet deep enough to keep ardent knob-twiddlers happy for hours.

The accessibility of Movement is perfectly illustrated in respect to the modulation mapping, where the rhythm sources are assigned to parameters within the FX engine simply by a process of drag-and-drop. Once assigned, numbers in the centre of each pot indicate the routing, as well as small bar graphs on the bottom of the pot to see the depth of modulation.

The beating heart of Movement is the four rhythm sources: each set to work as an LFO, step sequencer, or sidechain modulator. Looking first at the LFO, it’s pleasing to see a range of creative waveshapes (like Quad Stepped Sawtooth, or Notch) as well as the conventional sine, triangle and sawtooth shapes.

We also enjoyed the addition of a Chaos control, which varies the amplitude of the LFO on each step, making the output more interesting to the ear. As you’d expect, Rate can be locked to various clock divisions – from 1/64th notes, right up to eight bars – as well as including both dotted and triplet settings. 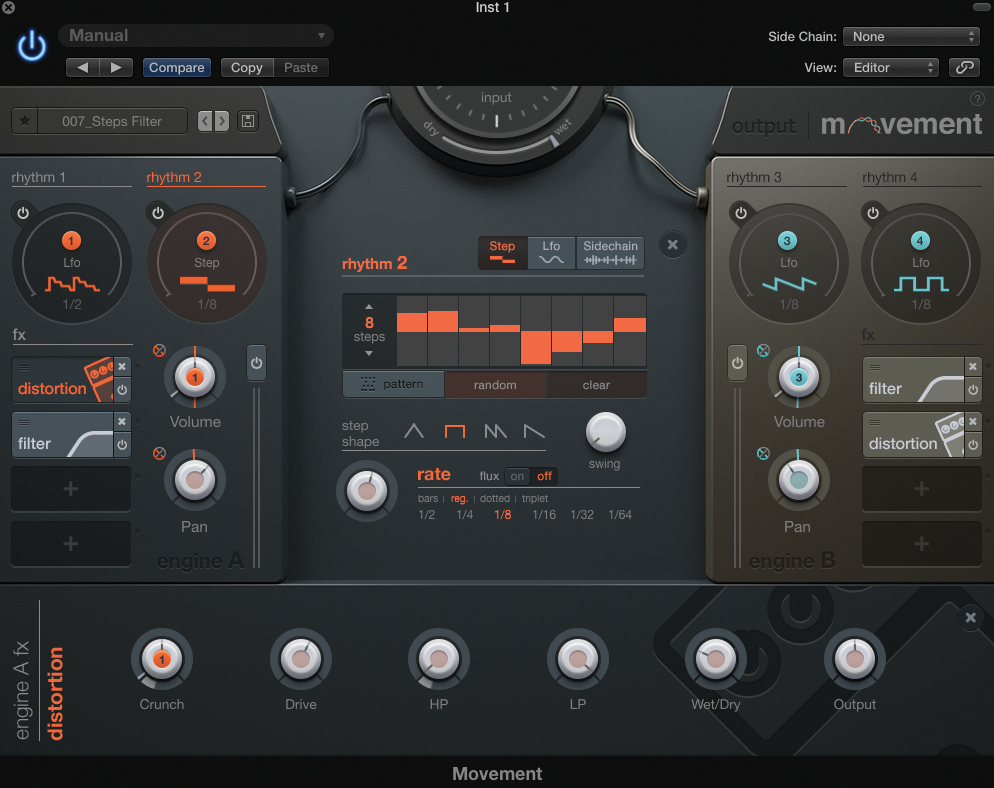 One of the more intriguing elements has to be the Flux control, which lets you modulate the speed of a selected LFO/step sequencer using the rate of the other. The result of using Flux is a unique form of shuffling or skipping movement – whether it’s a subtle Tangerine Dream-like movement between 1/16ths and 1/32nd settings, or a more radical Dubstep-like modulated wobble moving from 1/8ths to 1/24ths. Not surprisingly, Flux plays a big part in many of the presets, and certainly a key component to the unique sound of Movement.

With up to 32 steps, the step sequencer is a great of creating patterns within Movement, with a handy set of pre-programmed sequences to get you started. To vary the effect of the step sequencer, Movement includes a variety of step shapes, alternating between ‘gated’ square shapes across the steps, for example, to a more typical ‘spiked’ AD-enveloped shape. While it might have been nice to see shape-editable on a per-step basis, it’s still a great feature that tallies with the immediacy of Movement.

One prominent element of the GUI is the large X-Y controller, which is configured to add a level of ‘performance control’ to all of the presets. Indeed, it’s well worth tweaking the X-Y controller as you move through the presets, as its effect can have quite a profound impact on the plug-in’s output. Even better still, consider automating the control so that you can add a whole level of animation and progression to the sound that goes above and beyond what the rhythm sources offer.

Although some may be surprised by Output’s move into the audio plug-in world, it makes a lot of sense. One consistent theme to all Output’s products so far has been the sonic depths of the playback engine. Where some libraries offer a ‘fait accompli’ with respect to their sound content, Output’s sample-based instruments used their content as just the beginning of what you could achieve. Indeed, with a range of filters, effects options, modulators, step sequencers and so on, instruments like REV, SIGNAL and EXHALE felt like creative tools in their own right, rather than pre-assembled collections of sounds and effects.

In keeping with Output’s other offerings, therefore, Movement sounds fantastic, with a set of presets that will surprise and delight in equal measure, especially when you start manipulating the aforementioned X-Y pad. Having always wondered what SIGNAL would sound like with our own audio material passed through its audio engine, Movement does, to a large extent, answer that question.

As you’d expect, pads and any ambient and textural sources gain an extra sense of dimensionality and animation, which can range from something subtle to more extreme sonic territories. What was a big surprise, however, was the transformative effect Movement had on ‘vanilla’ drum loops, highlighting the versatility of the plug-in.

Like a number of select software-based tools, Movement is the perfect remedy for those moments when inspiration starts to run dry; or indeed, an existing palette of sounds becomes too familiar. Movement is a tool that works best when a degree of serendipity is thrown into the equation – when you’re not quite sure exactly what you want, but you’re aware your music needs some form of rhythmic or textural lift. The result might be as simple as a small stutter effect, but it will ultimately provide the all-important ‘ear candy’ that your track needs.

Movement is a relatively unique product, although there are alternatives that explore similar areas, especially in respect to step sequencer-driven effects. Waves’ MetaFilter ($149) is a good combination of analogue-style filtering controlled by a step sequencer, LFO and sidechaining – although, of course, you miss out on the other effects included in Movement. 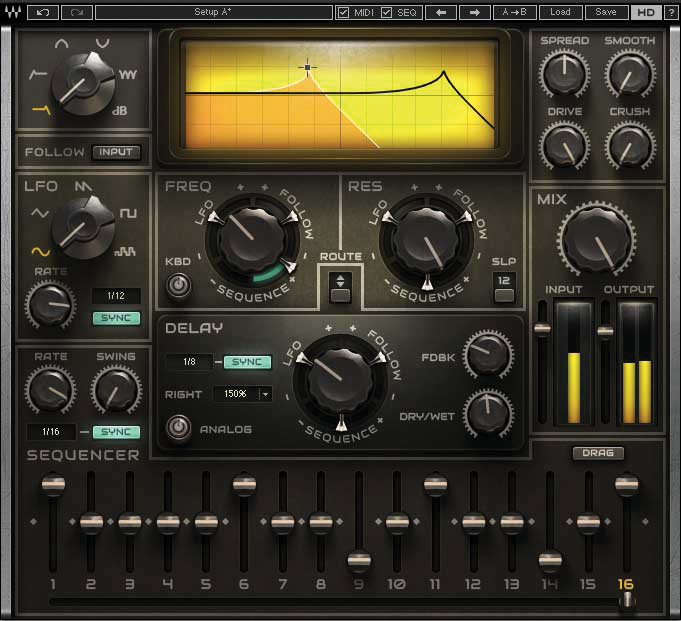 I’ve achieved similar modulation-style effects using Native Instruments’ Guitar Rig 5 (£169), which has a modular-like signal path and all-important step sequencers and LFOs, but lacks the immediacy or focus of a tool such as Movement.

You can assign the X-Y pad to any parameter by either right-clicking, or cmd-clicking on its control. The two axes of the pad correspond with the two FX engines, hence the cyan and orange colouring. By clicking on the small X-Y pad icon next to the control, you can set the relative knob range, moving between subtle and more extreme parameter changes.

While it’s hard not to be impressed by the ingenuity and creativity embedded into Movement, it does have a small number of caveats, which are worth considering. The modulation-routing system, though intuitive, doesn’t necessarily facilitate the summing of two rhythms to a single destination – so that, for example, a fast-moving step-sequencer line is slowly modulated up and down using a slow-moving LFO.

Equally, the FX options, though competent for the task in hand, could have greater scope – whether it’s the option to change bitcrushing as well as distortion, or a greater amount of filter-pole settings, or some of the granular options included in SIGNAL. 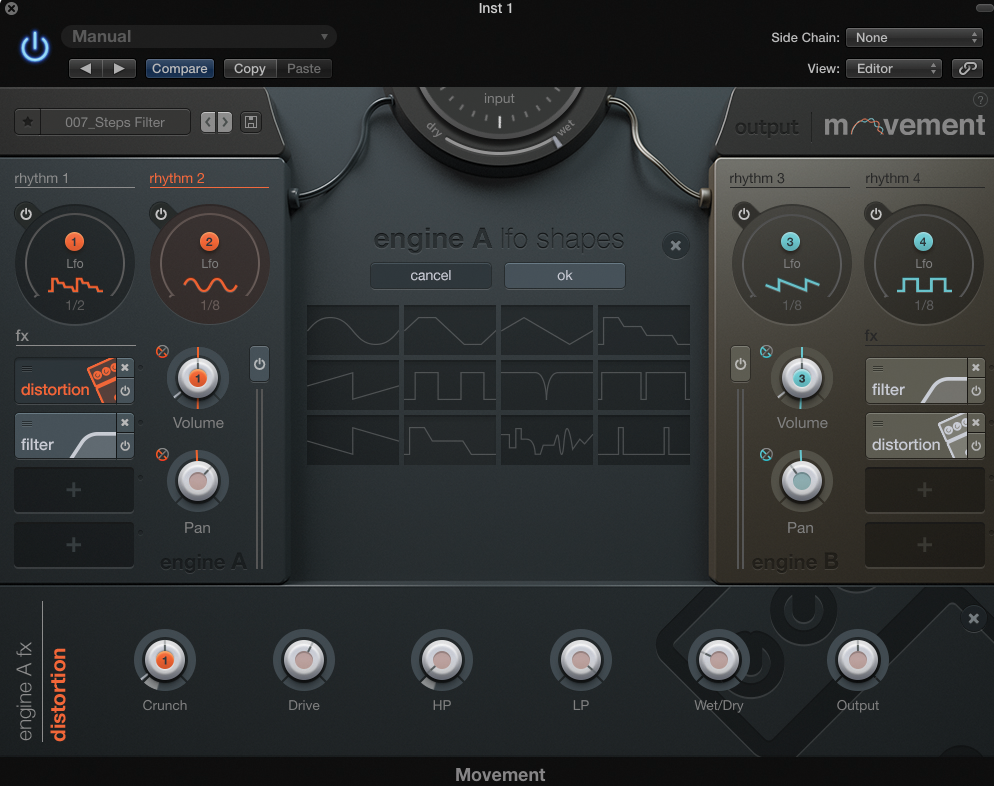 Overall, Movement is an exciting development for Output, demonstrating that its unique approach isn’t just restricted to sample-based instruments. Output seems to have a knack of understanding what piques a producer’s interest, which it then manages to develop into a coherent musical product: whether it’s an instrument focused on reversed sound, like REV, or in Movement’s case, a plug-in that adds motion and interest to anything that passes through it 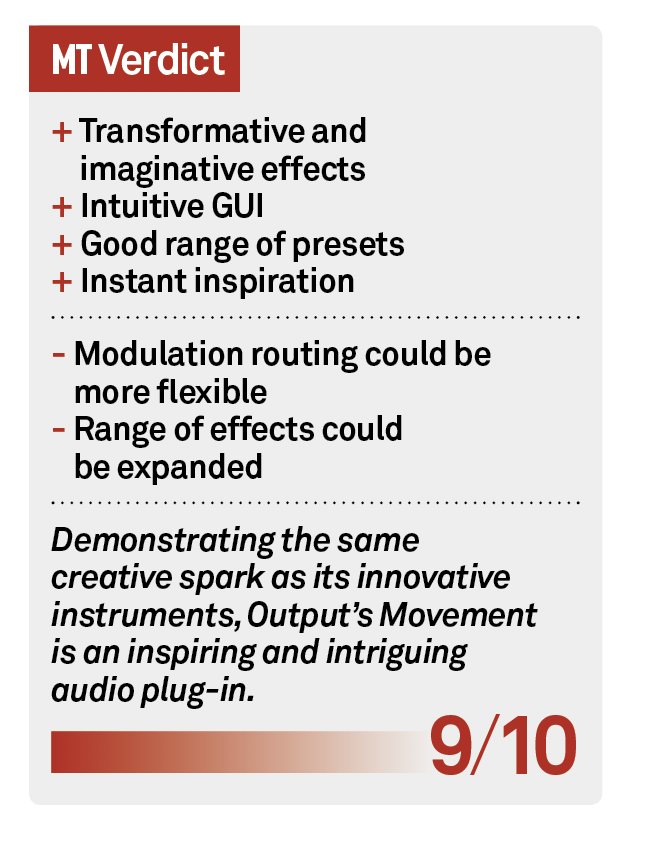