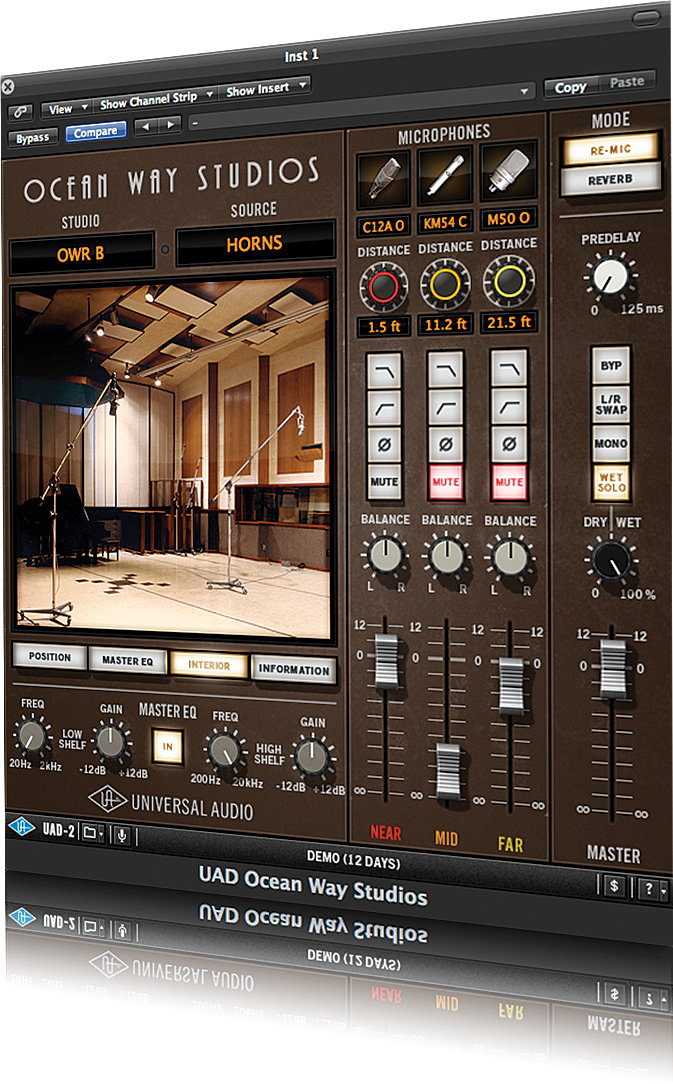 UA’s latest UAD plug-in is a unique take on re-creating the sound and acoustics of a classic studio. Mark Cousins learns more.

The aspirational nature of many of Universal Audio’s plug-ins hasn’t escaped our attention – an almost endless list of desirable audio devices that we’d love to have permanently wired into our studios (Neve equalizers, Fairchild compressors and Lexicon reverbs, to name just a few). But with the release of the Ocean Way Studios plug-in, this aspirational quality takes on a whole new character. Now, it’s not just the hardware we’d expect to find in a professional recording facility, but the actual sound of music bouncing around its live room. But can this latest UAD plug-in really place you in the heart of Hollywood’s Ocean Way Studios, or is it just a novel twist on the age-old process of reverb?

Making Waves
On first encounter, the role and technology behind the Ocean Way Studios plug-in isn’t immediately obvious – is it just a convolution reverb, like Altiverb 7, or is it an elaborate mic-modelling tool that enables you to ‘re-colour’ an existing source recording? In truth, Ocean Way Studios is far more than either, being built on Universal Audio’s new Dynamic Room Modeling technology. In short, it uses the same process used to capture the nuances of an audio device, but applied in the context of a recording space, alongside the cupboard of classic mics used to capture the source.

Principally speaking, the Ocean Way Studios plug-in works in two distinct ways. There’s a Re-Mic mode, offering a completely immersive solution to Ocean Way’s sound, and a Reverb processing mode that is much closer to the use and operation of a traditional reverb plug-in.

In essence, the Re-Mic mode could be compared to the concept of re-amping, whereby a source is fed to a guitar amp in the studio and then re-recorded, complete with colourations of the speaker, new mic and, of course, the room itself. However, the Ocean Way plug-in isn’t trying to emulate the speaker element, as such, but it does recognise that even the ‘dry’ source will be tonally modified in some way. 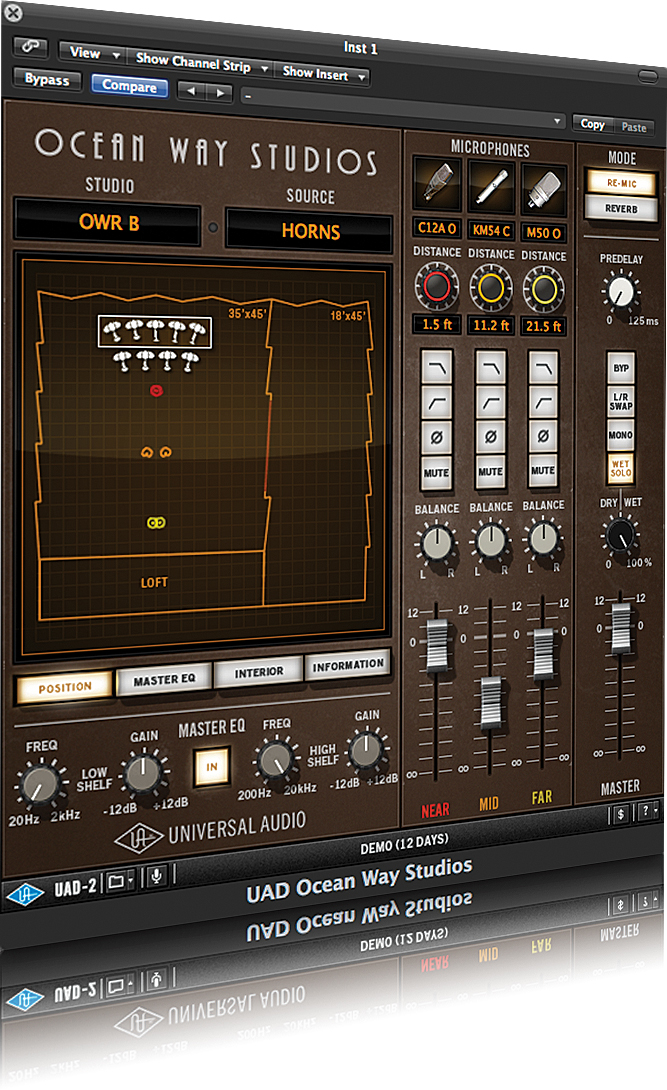 Taking the Mic
Run in Re-Mic mode, the Ocean Way Studios plug-in should be instantiated as an insert effect, as the output is a wholly modified version of the original source. Start by selecting the Studio and Source, with the Studio option being switchable between the two live rooms at Ocean Way, and the Source defining some initial dispersal patterns in relation to the source sitting within the room. Although the Source list isn’t exhaustive, it offers a good range of starting points, including drums, strings and amplifier cabinets.
Once you’ve selected your Source and Studio, you then go about choosing, positioning and levelling a series of virtual microphones.

In effect, therefore, the Ocean Way Studios plug-in is modifying both the dry source file, largely through the colouration of the microphones, and mimicking the precise acoustic conditions present at the three mic positions – Near, Mid and Far. If you want a relatively dry sound, therefore, use just the Near mics positioned right up against the source. To add more ambience, either move the Near mics away from the source or add the Mid and Far mics into the equation.

Making Room
As you’d expect, the operation of the Ocean Way Studios plug-in feels intuitive and tangibly hands-on – in other words, you actually feel like you’re standing in the live room positioning microphones rather than tweaking settings on a reverb plug-in. Although the acoustic of the studio isn’t expansive, it definitely feels and sounds like a room that’s empathetic to a range of instruments, and assuming that your source is relatively dry, a great way of adding dimension and space to your recordings without them sounding noticeably reverberated.

If you want to use Ocean Way Studios more like a traditional reverb plug-in, you also have the choice of running it in Reverb mode. Used in this way, the plug-in removes all ‘dry’ signals from the output, which negates some of the cleverer aspects of the modelling but allows you to use the plug-in in a traditional wet/dry capacity, potentially running a number of signals out to the ‘live room’ to inject a dose of ambience. You can still colour the reverb with the choice of mics, and change its dimensions by moving them, which makes it far more intuitive and musical than a traditional reverb plug-in.

The Ocean Way
Having had the input of Allan Sides (an engineer who’s spent plenty of time at Ocean Way) and over three years of technical development, Ocean Way Studios more than meets its aim of recreating the sound and acoustics of a classic studio. It’s also an ingenious new way of looking at signal processing, bringing together a number of strands – namely, virtual acoustics and mic modelling – in a dynamic, intuitive way.

Of course, it’s hard not to draw some comparisons between Ocean Way Studios and the aforementioned Altiverb 7. Indeed, used ‘statically’ in Reverb mode, it’s conceivable that there’s little difference in the sonic output between the two (it’s worth pointing out that Altiverb doesn’t have an IR file from Ocean Way). However, once you start moving mics around or use it in Re-Mic mode, Ocean Way Studios becomes a far more interesting tool, letting you tailor your acoustic space in powerful and interesting ways.
Ultimately, though, Ocean Way Studios is a truly unique tool, something that can shape both the colour and ambience of your recording in ways almost impossible to achieve elsewhere.

With detailed room modelling and hands-on mic positioning, the Ocean Way Studios plug-in is a perfect tool for adding ‘studio-like’ spatiality to your recordings.