Our thirst for classic synths is seemingly infinite, and Arturia has come up with another cracker. Hollin Jones sounds it out. 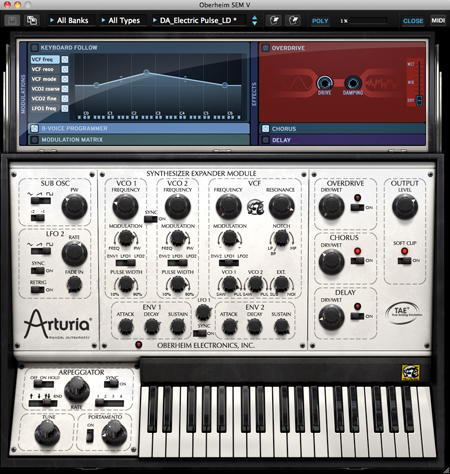 There can’t be many classic analogue synth re-creations left on Arturia’s ‘to-do’ list but the Oberheim SEM is an important addition to its already impressive line-up of virtual instruments. Developed in the mid-70s, the original was a studio staple for those lucky enough to be able to afford one, and enjoyed something of a renaissance in late 80s and early 90s electronica. Now, with hardware models extremely scarce, a virtual re-creation is the easiest and most cost-efficient way of getting those classic sounds.The SEM V is a modest download and comes in a multitude of formats. It’s 32- and 64-bit-compatible on the relevant versions of Mac OSX and Windows, and works in standalone or plug-in mode. You authorise the instrument via a dongle or by binding it to your machine, both of which require an internet connection. The synth itself is pretty straightforward, so won’t be too daunting to newcomers.

Arturia’s TAE technology is excellent at modelling the characteristics of analogue circuits and components and, generally speaking, produces a gorgeous sound. Happily, that’s the case here as well. Sound generation begins with two oscillators and the algorithms replicate the exact sawtooth and variable-width pulse waveforms present in the original. Oscillators can be coarse-tuned by left-clicking and dragging, and fine-tuned by right-clicking and dragging, replicating the dual-concentric knobs on the original. The oscillators can be hard-sync’ed to each other and each has a modulation control that can be assigned to LFOs 1 or 2 or Env1 parameters. Sound passes to a filter, and the 12dB/octave multi-mode filter is one of the things that gives the SEM its characteristic sound. It has four modes: low-pass, high-pass, notch and band-pass, as well as Modulation, Frequency and Resonance controls. Two ADS (Attack, Decay, Sustain) envelopes are faithfully modelled on the original and help you to create the kinds of sounds made popular by the original hardware.

As a re-creation of hardware, the SEM V is excellent, but it includes quite a few new tricks that make this virtual version far more flexible. For a start it’s polyphonic and eight-voice multi-timbral, reflecting the 2-, 4- and 8-voice models that were produced. It has a white-noise generator to mix into sounds for more grit as well as a sub oscillator with sawtooth and sine waves to add depth and bottom end to patches. If you switch this on and pick a two-octave dip you can really add a huge amount of bass weight to a sound. There’s a second LFO that enables you to perform more complex modulations, plus onboard effects to enrich your sound. These consist of overdrive, chorus and delay and they have advanced controls accessed via an expandable window (of which more in a moment). Other performance controls added to the software version include an arpeggiator (fun, inspiring and simple to use) and portamento. These make the synth much more playable and flexible, so you won’t have to rely on a DAW for such programming tricks.

Click on the ‘Open’ button at the top of the SEM and you reveal a distinctly non-retro control section with three new modules for sound-shaping and programming. First up is the Keyboard Follow section, which lets you draw modulation curves on-the-fly. You can map up to six parameters from the synth to these, making it easier to sculpt sounds. Next is the Voice Programmer, which lets you mix and edit up to seven additional virtual voices. Finally, there’s a modulation matrix offering eight simultaneous modulations, eight sources and more than 25 destinations. These are managed via an easy-to-follow menu system. As a bonus there’s a MIDI assign mode whereby you can quickly map hardware MIDI controls to the synth’s parameters.

The SEM V is a gorgeous-sounding synth and, crucially, like the original it’s fairly easy to get to grips with. You don’t have to be a synth wizard to tweak and design sounds, and it’s a lot of fun when you play around. It’s equally suitable for electronic music, soundscapes and even pop. The new features – arpeggiator, sub-oscillator and three modules – extend the functionality of the instrument even further, and will surely help you get more out of what is already an excellent synth.

WALK ON BY
Nothing!

An excellent addition to Arturia’s line-up. A serious and great-sounding synth that is easy enough for beginners but powerful enough for pro users.