Nord has updated and added to its top-end Stage range of keyboards. Andy Jones checks out the EX HP76… Details Manufacturer Nord Price EX 88 £2,549; EX HP76 £2,399; EX Compact £2,199 Distributor Sound Technology Contact +44(0)1462 480000 Web www.nordkeyboards.com As a reviewer, you shouldn’t make assumptions before you review products, as – of course – everything […] 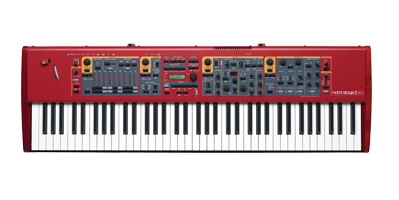 Nord has updated and added to its top-end Stage range of keyboards. Andy Jones checks out the EX HP76…

As a reviewer, you shouldn’t make assumptions before you review products, as – of course – everything you test should be looked at on merit and not influenced by the name on it, no matter how good (or bad) that company’s reputation.

But that’s hard to do when something big and red arrives with the word ‘Nord’ on it. I’ve given both the Nord Lead 4 and A1 synths great reviews recently, and now the latest Stage is here. So 10 minutes into playing it and I’m already finding it hard to come up with adjectives, but I’ll try not to get too far ahead of myself…

The Range
The Stage is designed to be a keyboard player’s ultimate instrument, with superbly-created keyboard sounds covering organs, pianos and synths.

It also has controls for the main components of each, plus effects and a truly great build that both looks the part and is designed with touring in mind.

At 12Kg, the HP is not as light as the company’s synths, by any means, but 50 per cent lighter than the EX88. As well as the addition of the HP, the range sees improved presets and extra memory for the Nord Piano Library (now at 1GB).

Describing the sounds on the Stage as ‘great’ is a bit like saying a Lamborghini ‘looks great’. Of course they are – Nord has been at this for years – but here’s a quick run-through… 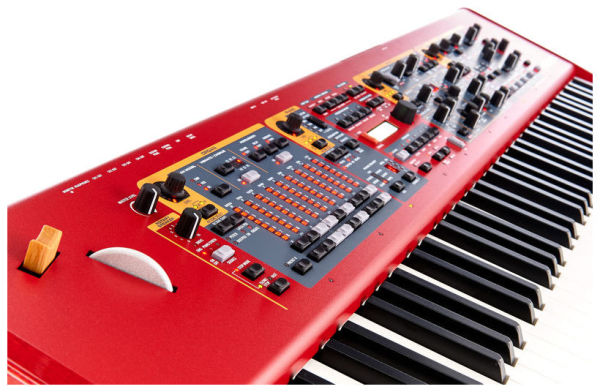 The EX Quality
There are three sections – piano, organ and synth – within each keyboard in the range, and the latter two have more detailed controls to access various common and not-so-common parameters, as we shall see.

Within the piano section, you get everything from grands to uprights to vintage, all compatible and upgradeable with the aforementioned Nord Piano Library, a continuously updated, free online resource. Various sampling techniques have been employed for added realism, including Advanced String Resonance, which replicates the interaction of piano strings resonating with one another.

Techniques such as this certainly help the overall sound, and each of the pianos, though subtly and not-so-subtly different, is excellent. Suffice to say, the grands are the instantly impressive, majestic and intricate pianos you expect – and you certainly get the most out of them with the HP’s keyboard

This is described as having an ‘ultra lightweight hammer’ action, but really does bring more to the overall performance than you might think.

It’s very responsive, not spongy, and you find you get a great range from each note. When moving to a ‘proper’ keyboard such as this, players used to synth-type keyboards (AKA me) and less hammer action can find themselves miss-hitting keys as their hands stretch across them, but I didn’t find this.

The keys on the HP are responsive and sensitive enough to follow most of my movements, both good and bad. Combine this great feel with the astonishing onboard pianos, add the supplied sustain pedal, and you really can get incredibly detailed and nuanced performances.

It’s important to reiterate the sound quality, and also the hands-on control, that the Stage offers. Pianos are brought to life with the sustain pedal, of course, and moving onto the organs, you get a hands-on section dedicated to those sounds with drawbars, effects and percussive controls for detail and flexibility.

Again, the authenticity of the original instrument is paramount, with B3 Tone Wheel and Rotary speakers both modelled to incredible detail. The supplied presets are superb and even more varied than the piano: anything from light, jazzy organs to full-on church types. But it’s what this section allows you to do with your sounds that counts; the digital drawbars let you change presets and filth them up, as do the effects – all in real time, all hands-on, fun and totally immersive.

Moving on to the third and final section, and it’s synth time. Again, they have a control section to themselves, and as a synth head I’m surprised by what you get. Arpeggiator, oscillator, filter and amp envelope sections are all present. The synth presets are maybe a little too obvious to some – big leads, Vangelis strings, trance, etc – but with these hands-on controls, you can really work with them.

The synth engine is based on Nord’s virtual analogue (one of the best out there), plus FM and wavetable synthesis, so there’s plenty to alter using the existing presets, and with the whole lot compatible with Nord ‘s Sample Library, you can easily upload new presets from the ever-expanding online library. Great sounds to start with, a great sampling engine, plenty of control over them, and options to replace and upload more.

Finally
In terms of using the stage I must draw attention to the effects section, not new to the range but amazing nonetheless. It makes selecting appropriate effects for organ, piano and synth easy, and then allows you to stack two together and add delay, compression and reverb.

It’s so hands- on, it’s almost like a synthesis stage in itself, in that you can take one sound and alter it well beyond recognition.

Any criticisms are very minor. I’d have maybe liked the sounds to be ordered automatically by type (which can also be said of Nord’s synths), but that’s me being lazy, as this is possible using the Sort facility, so no biggie. Also, I don’t want to be playing so many non-keyboard sounds with a keyboard.

They still sound good – it just feels odd playing such a great guitar sound with a 76-note semi-weighted keyboard. But this point is rather negated by the fact that you have access to libraries of presets, so you can very much determine your own sonic destiny. Overall, it’s hard to fault the EX HP76.

It provides probably the best level of portability vs keyboard quality within the Stage range, so will be a popular choice. As for the range itself, those preset tweaks and extra memories refine an already excellent set of keyboards. Incredible sounds, enough control to dig deep into them and a superb, hands-on effects section. Maybe you can make assumptions before you test certain gear after all. 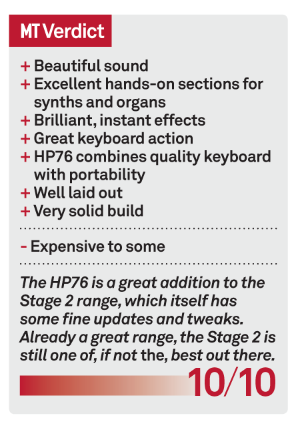