The Lead A1 is an accessible analogue-modelling synth, but Nord has also unleashed a creative monster, as Andy Jones discovers… Details Price £1,249 (Lead A1R will cost £1,049) Contact Sound Technology – 01462 480000 Web SoundTech        Buy from our Retail Partners: Amazon.co.uk Widgets Not long after the release of the Nord Lead 4  the […]

The Lead A1 is an accessible analogue-modelling synth, but Nord has also unleashed a creative monster, as Andy Jones discovers…

Buy from our Retail Partners:

Not long after the release of the Nord Lead 4  the Nord Lead A1 was announced to some surprise at the Winter NAMM show. With the name and the simplified front panel it definitely seemed to be pushing the analogue-modelling side of things so let’s look at the concept…

The A1 is designed as an analogue-modelling synth, yes, but there’s more to it than that. The interface is streamlined to allow for ‘ fast-track programming’ in that it moves away from the slightly more complex architecture of the Lead 4 and straight into the bare bones of analogue programming. (Not that I thought the 4 was particularly tough to master – indeed, I thought many of its hands-on performance features were out of this world.)

The A1’s design comes from the fact that people wanted something to program quickly and effectively. But don’t think ‘cut down’ as, if anything, the synthesis engine is supposedly more analogue-sounding than that on the 4, as it has an all-new core that ‘recreates a total analog signal path with uncanny realism’ and also features some new and clever tweaks to make things more interesting and instantly hands on.

The New Stuff
The most important of these are what Nord call Oscillator Configuration Shortcuts. These are quick ways of setting up complex oscillator configurations – the heart of your analogue-modelled sounds. So you get eight preset variations – with many sub variations – all ready to go.

As the building blocks, these are important so are: Pitch, which simply adjusts the pitch of oscillator 1; Shape adds extra wave shaping via the on-board waveforms (of which there are 47 to choose from); Sync adds a hard sync by way of the additional oscillator; Noise adds, you guessed it, noise; Detune adds the second oscillator; Sub Mix adds a second with waveform (with Sine, Tri Saw and Square shape options); FM adds the classic FM configuration where osc 1 is the carrier and 2 the modulator; and finally AM adds amp modulation by way of osc 2.

Other new features include a ‘Like’ feature, that simply allows you to store a sound you are working on in a temporary location. Sounds obvious, but how often have you liked something but have wanted to move it on to something else and lost that initial inspirational sound? Here you keep that first version (saved in one of 50 temporary slots) and simply come back to it later. There’s also a Multi Focus feature that controls all four sound slots that make up a performance so you can, for example, change all four sounds in real time.

Getting back to the main sonic architecture, the filter section from the NL4 is, fortunately, largely retained with the 12 and 24dB low pass, high pass, and band pass options; plus the superb diode and ladder filters (on the NL4) that emulate those from the Minimoog and the TB-303 synthesizers; and finally you get the drive dial for even more dirt.

The A1’s LFO has a choice of waveforms and a 3-stage ADR/ASR Modulation Envelope and LFO rate can be sync’d to the master clock. Two new effects – ensemble and chorus – model vintage synths like the ARP and Solina. These are in addition to the reverb, delay, ring modulation, phaser, flanger, and drive available independently on each slot on the A1.

So, new features, a lot of retained features but a whole new engine and some new effects. That’s got to mean it’s time to try those sounds, right? Sort of… 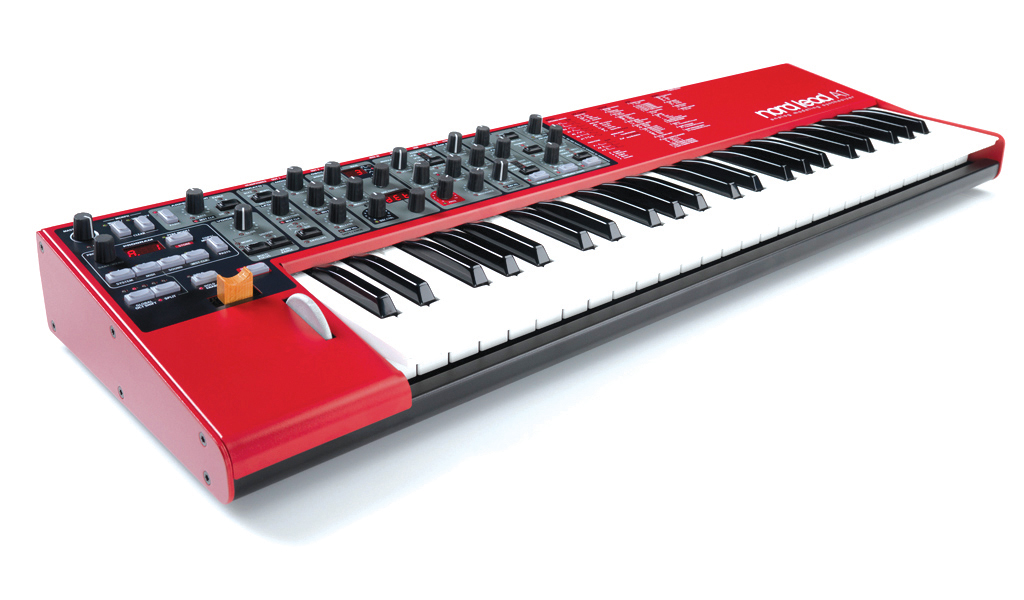 Looks simple, and small, compared to the Nord Lead 4, but (not very far) beneath the A1’s front panel lies creative genius…

OK, Let’s Not
Like the NL4, there are no groups of sounds found in any particular slots – it’s all pretty random.

But what comes across is a set of preset sounds that is more unified than those on the NL4; not as varied, obviously, but a collection that hangs together better, all around a similar core engine. Oddly, because they are more focussed they come across as a little more useable to me, but I am a fan of this kind of sound – the sound of the pure synthesizer rather than the type where you literally get all the bells and whistles added. That’s not to say it’s better than the Nord Lead 4, just more an expert in one field rather than spreading itself over many.

So, right about here, I should detail those many excellent leads, arpeggiations, plus the deepest virtual analogue basses you will ever hear and all of that amazing analogue movement.

But… STOP!
… because I’m not going to talk about the presets, and that’s never happened before. What would have been an easy bit of writing – ‘deep basses here, searing leads there’ and so on and so forth – is simply not going to happen in this review. The A1 is virtual analogue, and it’s Nord, so you know they’re good presets, ok? And the truth is the A1 has them by the bucket load, but it’s what you do with them that counts, and counts more than ever before…

As I stepped through each preset, preparing to describe them for you, I found myself doing something rather unusual: programming. And exploring. I began pressing the hold key, triggering an arpeggiation and simply dialing dials. And this is where the A1 turns from your average preset buster, into what it should be used for: creation!

The Nord Lead A1R is, not surprisingly, the rack version of the A1. It costs a couple of hundred pounds less.

So I have a sound playing… pretty much any of the presets on offer. I play with the filter drive for extra dirt. I then change the filter type for bite. Everything is sounding great so far. I then do more obvious things like dial the filter and resonance controls (yes, I am using the 303 filter at this point). But the real fun comes when I switch between the Oscillator Configurations that prove to be the A1’s secret weapon. You’re not just changing the sound, sometimes you are composing as you progress.

Switch between some of the harmonic waveform variations, for example, and you find yourself creating note sequences which change note as the configuration changes. It’s hard to explain but what you end up with are melodic riffs which change in both note and timbre – all inspiring stuff!

Hit the Osc Contrl dial and you can make the results scream or become more mellow. Hit the filter and resonance again and you have something altogether more expected, maybe, but in combination with what you’ve just done with the oscillators, you can get some very different stuff indeed. It’s analogue magic! I urge you just to play with the dials. It’s here that you also realize why they’ve put that Like feature in – you’ll fill the 50 spaces very quickly. 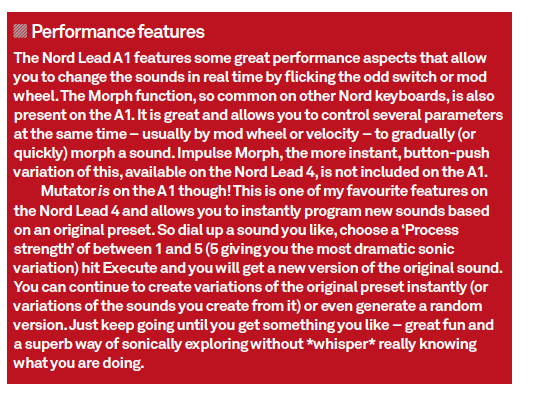 Conclusion
Which brings me too quickly to the end with little time spent on the other A1 features. Mutator and Morph are touched upon in the box above and add more fun to the sound creation side of things, and in Performance mode, read the above and multiply by four!

As to the A1 as a concept, I have to admit that I was initially a little confused as to where it fits in. But ultimately that doesn’t really matter as overall it is simply one of the most creative synths I have come across because you get so much instant, easy, hands-on, real-time and dramatic access to any sound. The oscillator configurations are a genius way of changing the whole architecture at the twist of a dial and, used with the other controls and Morph feature, are simply inspiring. I will use the A1 with my DAW constantly in record mode so I can revisit whatever I capture to use as ideas for songs going forward.

So I am genuinely surprised by the A1. It’s come from nowhere – a totally unexpected synth from Nord with one of the most ‘instant’ feature sets I’ve ever used. And while it’s smaller than the Nord Lead 4 (in physical and sonic terms) I can’t help thinking that its simplicity, its creativity and its quality will win it many friends. Nord might have trouble marketing it, but the A1 stands on its own, and is my kind of synth, as you can probably tell. If you have an analogue heart, hold a note, dial some dials and after five minutes, you’ll be won over too… 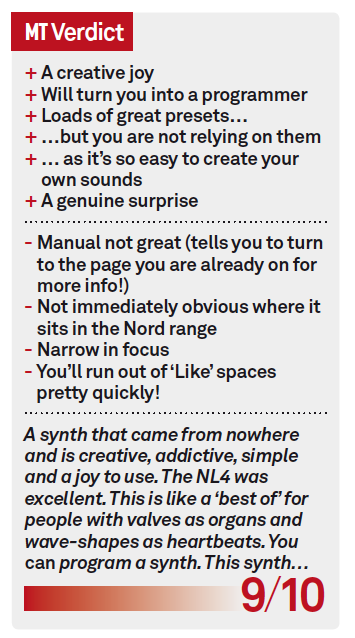