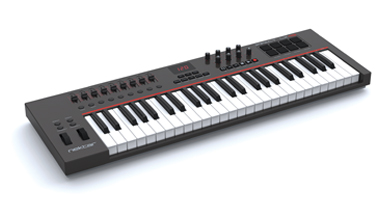 USB MIDI keyboards are a vital component of music production setups. You’ll spend an inordinate amount of time using them to input beats and melodies into your DAW so it’s important to find one that suits you.

Nektar has been making a name for itself with affordable MIDI controllers that come with proper DAW integration for a ‘plug and play’ experience, which is what most people ideally want. Its latest is the Impact series: a 25-, 49- and 61-key controller. Here we review the 49-key, though the specs of the 61 are the same only with more piano keys.

Making an Impact
The Impact is USB buss powered and also sends MIDI down the same connection. Round the back things are pretty straightforward, with a USB port, power switch and foot switch/sustain jack pedal input socket. Plug the keyboard into your Mac or PC and it springs into life, though to get the most out of it you will definitely want to download the DAW installer files to add specific support for your software of choice.

This is slightly fiddly, with a few hoops to jump through on the website and you have to register before you can get at the files. Once downloaded you can install specific support for Digital Performer, GarageBand, Logic, Cubase, Nuendo, Reaper, Sonar, Reason and Studio One. The keyboard actually comes with a copy of Studio One Artist on disc, and there’s the option to download it from Presonus’ website after registration, for owners of newer computers that lack optical drives.

The keyboard itself has full size, velocity sensitive and semi-weighted keys which offer a good combination of playability and portability. They feel responsive and realistic enough for piano or synth-style playing but without making the unit as a whole overly heavy. There are four selectable velocity curves available as well as three fixed curves, and the regulation pitch-bend and modulation wheels. To the left of the keyboard are quick octave and transpose buttons, very useful for changing settings mid-performance without having to dig around in any sub menus to find the controls. These buttons can actually have their function altered to send out program change messages, change the global MIDI channel or select one of the five user presets so they’re more flexible than they appear at first glance.

Pad Control
Over to the right of the front panel are eight velocity-sensitive pads which can be assigned any MIDI note number or cc message and can thus be used both for playing and as toggle buttons. A Pad Learn mode lets you choose a pad, play a note on the keyboard and link the two, and four pad maps can be stored on board. There are eight variable knobs to tweak parameters and there’s a set of transport controls that doubles up with other functions like set L and R locators, Undo and Click on/off when combined with the Shift button. Visual feedback is via a simple but serviceable LED screen. 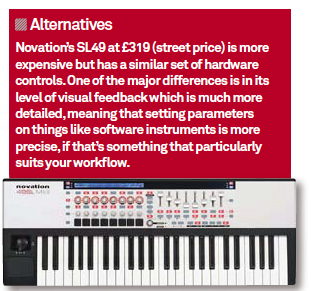 To the left is a bank of nine faders and buttons which are generally used for mixing in your DAW and, indeed, pressing the Mixer button from the central area should assign these, with the Bank buttons letting you scroll around the mixer. The pots become panner controls in this mode and the ninth fader is always assigned to the currently selected channel, a helpful touch. Further controls in the centre include an Instrument button to call up the GUI of the currently selected software instrument, track navigation and patch selection buttons.

Impact?
We tested the Impact 49 with Logic, Cubase and Reason on the Mac and, on the whole, it was picked up as expected after installing the support files and the shortcut buttons like Mixer. Instrument and patch and bank selection also did what they were supposed to do. It might sound odd to claim this as a victory, but MIDI mapping can be a notoriously flaky thing. Luckily here it’s not, and Nektar has done a great job of matching the hardware controls to the software.

You can set up your own custom controls and maps, of course, and these are remembered even when the unit is powered off. As ever with basic screens, there’s the occasional bit of guesswork as to what you’re looking at but it’s not exactly the end of the world and overall this is a solid workhorse of a MIDI controller that will be at home in any music production setup. 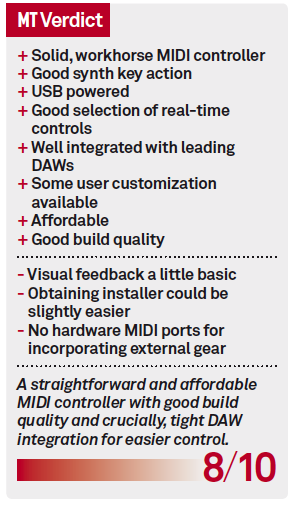