If you’re out to score lush-sounding soundtracks, String Ensemble, a new 60-piece string orchestra from Native Instruments, could be just what you need. Keith Gemmell takes it section by section 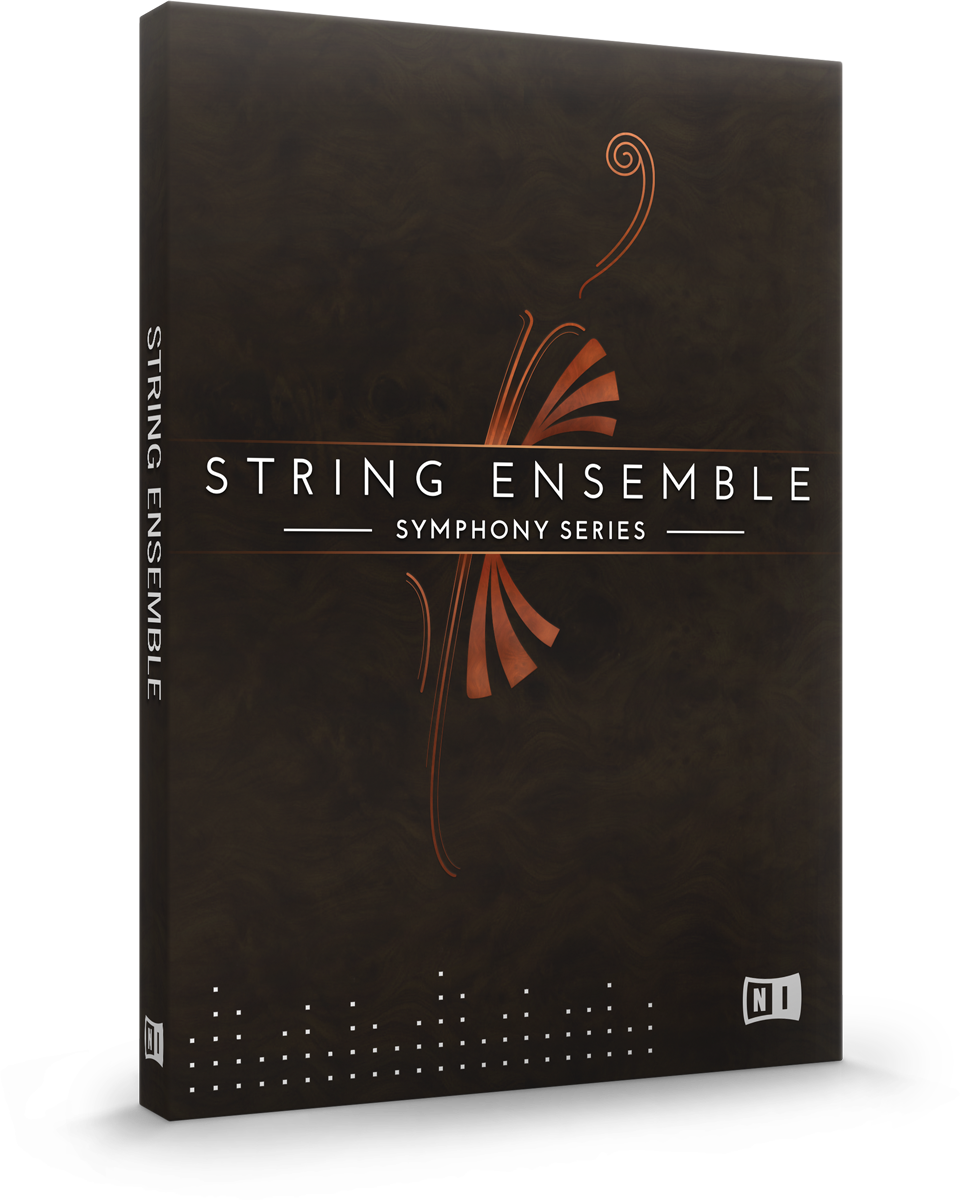 Although Native Instruments has developed a vast number of sample libraries over the years, until recently, it has steered clear of a full symphonic library suitable for film scoring and other media use.

But suddenly, a few months back, it announced a new Symphony Series and released the first two libraries, Symphony Brass Ensemble and Symphony Brass Solo. Both were developed especially for Native Instruments by Soundiron. Would Soundiron produce the upcoming string library, too, we wondered? Nope – it’s different strokes for different folks, and Audiobro, the producers of LASS (LA Scoring Strings) are behind the Symphony Series String Ensemble.

Tool Up
The Symphony Series’ rationale is, of course, to provide composers with a comprehensive toolset for creating realistic orchestral productions. In keeping with this philosophy, String Ensemble provides a production-ready stereo mix, plus the ability create your own mix using close, mid and far microphone positions.

There’s a dedicated mixer page with parametric EQ, convolution reverb and compression, plus a choice of key switches or MIDI CCs that can be used for assigning articulations. A huge plus for many will be the Auto Divisi feature for distributing voices to smaller sub-sections. Users of Komplete Kontrol S-Series keyboards can also use the pre-assigned performance controls. It runs in both Kontakt and the free Kontakt Player. 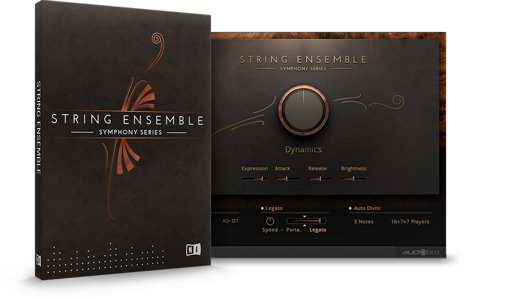 Just four Kontakt instruments form the basis of String Ensemble – violins, violas, cellos and basses. Each section is equipped with a comprehensive set of articulations and up to eight can be assigned to a section at any one time.

A fifth ensemble instrument is also available, where the entire string orchestra is mapped across the keyboard. Articulations are limited here, but the trade off, particularly for sketching out ideas, is the considerable reduction of memory usage.

String Ensemble’s GUI is very similar to those of the Symphony Brass libraries. This is deliberate, and future releases in the series are likely to follow suit. It makes sense: if you know your way around one product, then using another becomes second nature. 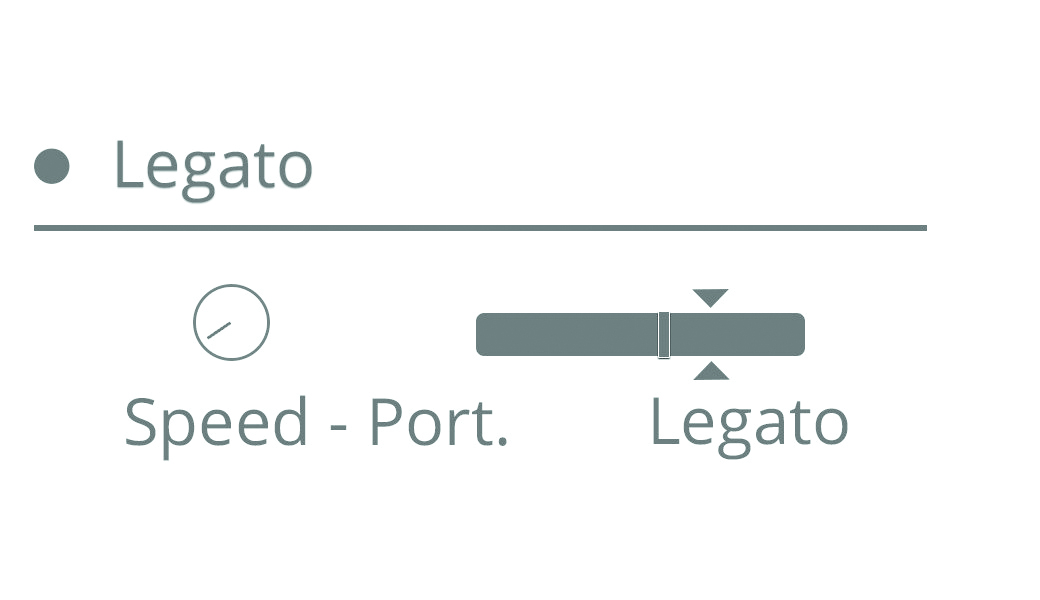 Slide Away
Legato is always a contentious subject when it comes to string libraries and we are pleased to report that it is well implemented in String Ensemble. When activated, the transition behaviour is controlled by velocity, with portamento kicking in on the lower velocities. This can be a little tricky to play, but a slider is available to set the velocity value below which the portamento is activated. 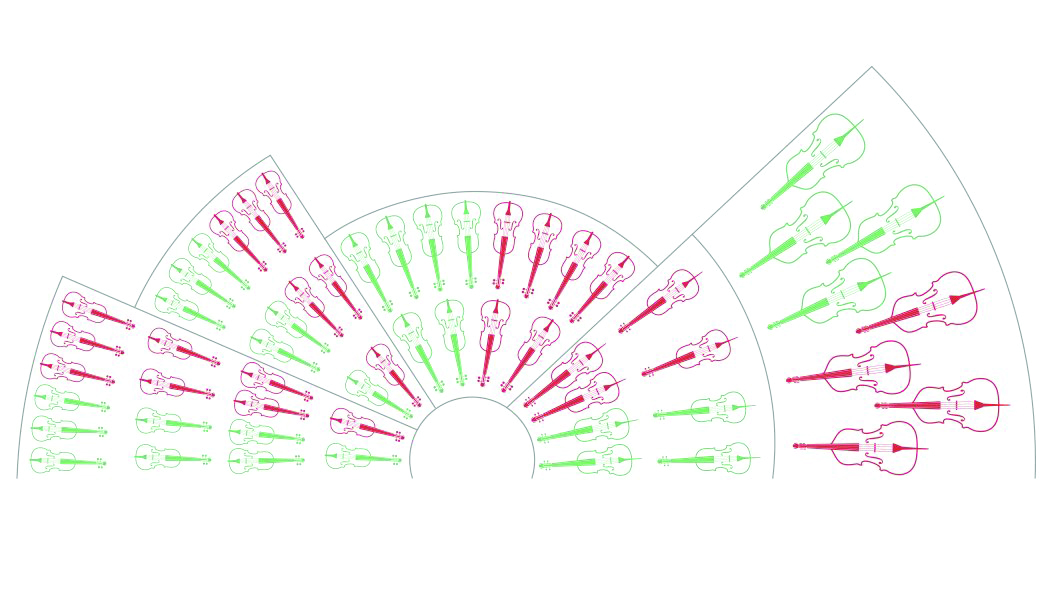 Divide and Conquer
All the sections for this track were recorded in two separate A and B parts, for an implementation of True Divisi functionality. The Auto Divisi engine (which is turned on by default) keeps player size consistent when performing polyphonic legato lines, chords, and phrases. This results in a more realistic, true-to-life string orchestra performance, with a professionally arranged sound.

Do You Really Need This?
If you are serious about writing for films and you don’t already own a full-sized string library, String Ensemble will serve you well. Film composers often use more than one orchestra, though, and layer them together in a single project. With such a smooth sound, String Ensemble should be ideal for this. With all five sections represented, it’s also possible to score accurately, exactly as you would with a program like Sibelius.

With all 60 players sounding together, the sound is lush and full, but can easily be tamed by using the clever Auto Divisi feature to reduce the size to 30, or even fewer, players.

Alternatives
Mixed-ensemble libraries from companies like Spitfire and Project Sam are very popular at the moment, but for true flexibility, access to individual string sections is so much better.

Like String Ensemble, Cinematic Strings 2 contains individual sections plus full and light ensembles with a similar lush sound quality. The much underrated Session Strings Pro features a smaller orchestra – perhaps more suited to pop production – but it’s flexible, with a big string sound. It, too, has an ensemble patch as well as individual sections. And then there’s LASS from Audiobro, the developers behind String Ensemble. LASS 2.5 has a ton of features, the newest being Stage & Color, which provides a way to have LASS sound like famous orchestral recordings and film scores. 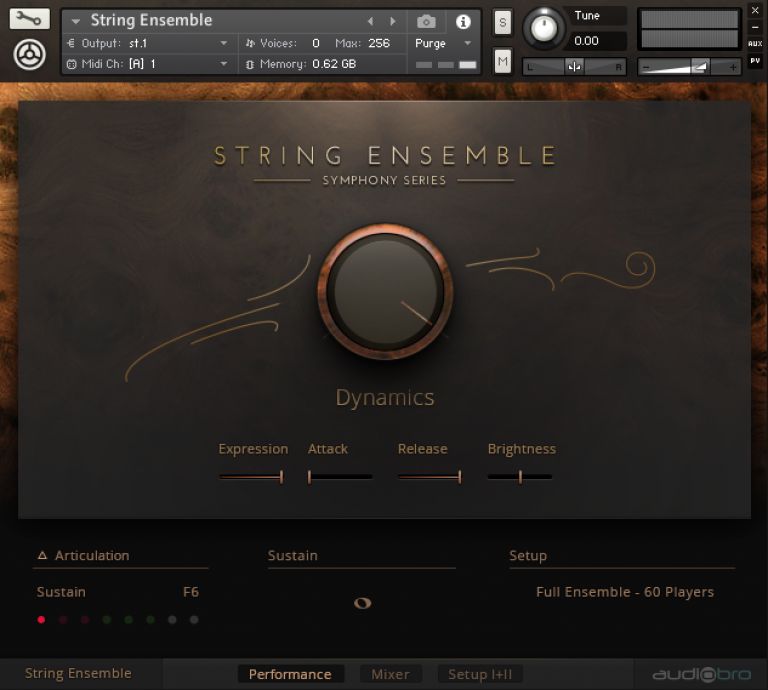 Dynamic Knob
The performance controls are the dominant feature of the GUI, with a very large dynamics knob taking centre stage. This is linked to CC 1 by default, and to produce the most realistic performances should be used in conjunction with a MIDI controller, using either the mod wheel of a generic device or the modulation strip on the Komplete Kontrol S-Series keyboards.

It enables you to control not just the volume but the intensity of the instrument, by blending several sample layers. A low setting produces soft bowing with a slower attack than a high setting, which produces more forceful bowing. Further performance controls, expression, attack, release and brightness are also mapped to the KK S-Series controllers by default.

All five default patches sound great straight out of the box, as it were, with a smooth and luscious sound. The violin instrument, for example, loads with 30 players, and a quick mooch about revealed a simple stereo mix and a modest helping of convolution reverb with a cinematic setting. The wet/dry level was around 10 o’clock on the dial.

Played monophonically, all 30 players play in unison. Add a second note, and the 30 players are automatically divided into 16+14. Add a third note and they divide again, into 16+7+7. Play four notes and they split once more, into 8+8+7+7. This is because the Auto Divisi feature is turned on by default.

It’s very important, because on many a string library if you were to simply play two notes together, the 30 players would also be doubled. By intelligently dividing them, as a professional arranger would do, a much more realistic result is achieved. The division, of course, varies from section to section. It’s a great feature, but it’s one which works best on passages with longer notes, since latency is sometimes noticeable on short articulations.

NI’s first symphony string library is certainly a winner, and apart from the tiny gold text on a very dark background is very easy to use and feature-packed in terms of control. With its rich, luscious, professional sound, this should prove popular with professional and amateur composers alike. 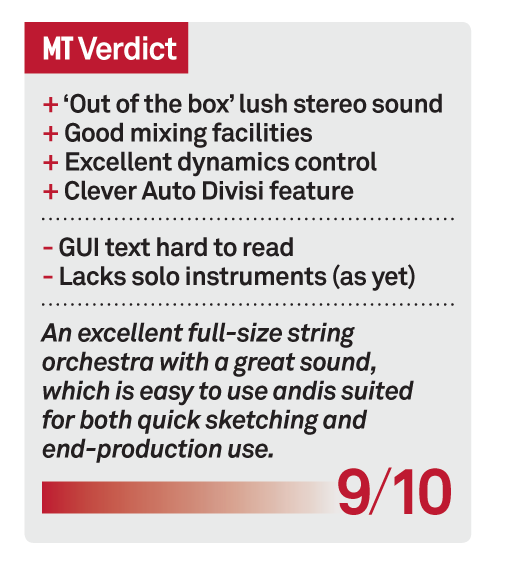